Editor's note: This is the eighth in a series of videos about the films of Wes Anderson, written and narrated by me, and produced in collaboration with my regular editor and filmmaking partner Steven Santos. The books were illustrated by Max Dalton and designed by Martin Venezsky, artists showcased in the videos along with stills and production material from Anderson's movies. You can view the rest of the videos, plus interviews and more, by clicking here.

Advertisement
“We were happy here. For a little while.”

All of Wes Anderson’s films are comedies, and none are. There is always a melancholic undertone, buried just deep enough beneath artifice and artistry that you don’t see it right away.

Such is the case with The Grand Budapest Hotel, his eighth and most structurally ambitious movie. After a first viewing, you come away remembering the wit and motion, and wit in motion, of this tale within a tale within a tale. A dowager countess is murdered, a foppish concierge named Gustave is framed and imprisoned, a nation is plunged into war as fascism’s specter looms, but these dire events are cushioned by colors, textures, and madcap chases.

When you recall the film, you quote the quotable lines: “She was dynamite in the sack, by the way.” “I apologize on behalf of the hotel.” “May I offer any of you inmates a plate of mush?” You envision farcical set pieces: the normally unflappable Gustave trying to escape the cops sent to arrest him by turning tail and sprinting; the Rube Goldberg-esque prison break, complete with tools hidden in pastries, a seemingly endless rope ladder, and the rhythmic tapping of hammers on bars; Gustave and his lobby boy Zero on a bobsled, chasing the assassin Jopling down a tree-lined slalom. You savor the details of costuming, special effects, set design, and cinematography: the pink hotel; the funicular; Madame D.’s Marie Antoinette-by-way-of-Elsa-Lanchester hairdo; a dresser-top packed with Gustave’s signature scent, L'Air de Panache; Jopling’s skull-shaped knuckle-dusters; those exquisite pastries in those exquisite boxes; the way the frame changes shape, depending on where you are in the story.

The whole film is further buoyed not just by a sense of invention, but reinvention. The heroes are people who have re-created themselves, or tried to. Madame D., weighed down by propriety and matriarchal responsibility and memories of youthful vigor, escapes into fantasy with Gustave, the only person in her life who treated her tenderly in her dotage, and wills him the painting that (eventually) changes his life, as well as Zero’s. The inmates, incarcerated for all manner of crimes, escape prison alongside Gustave, then pile into a taxi and disappear into the wider world. Agatha, an apprentice baker, becomes an action heroine, helping her love retrieve 'Boy with Apple' at great risk to herself. We never find out the details of Gustave’s history, but we don’t need to. We see through his cultivated façade each time he intersperses his coy “darling”s with expletives or momentarily (sometimes tactically) forgets to be a gentleman. The L'Air de Panache stands in for his persona: The man has perfumed his entire life.

But with each successive viewing, a funny, really not-so-funny thing happens: The veil of lightness lifts to reveal a film that would be unbearably sad if it weren’t cushioned by comedy and dolled up with spectacle. You find yourself dreading the moments of darkness more acutely: Joplin hacking off Deputy Kovacs’s fingers via sliding metal door; Zero in black-and-white, taking a rifle butt across the face; darling Agatha marrying Zero on a mountaintop as old Zero informs us that she, and their infant son, died two years later of the Prussian grippe. As you watch and re-watch, the film’s wit and motion never recede completely, but you may feel a pang as you realize that, like so many Wes Anderson pictures, The Grand Budapest Hotel is about loss, and how we come to terms with loss—or never do.

Say the film’s title again after a second or third viewing, and the emblematic image becomes the face of old Zero, a man so shattered by the losses of his best friend and his great love that he can’t bear to describe their demises in detail. He allocates just six words to Gustave’s execution at the hands of “pockmarked fascist assholes,” a moment pictured in plain-facts black-and-white that makes him a part of history before he can become history: “In the end, they shot him.” Agatha’s death gets three sentences, one of which describes the illness that killed her as “An absurd little disease.” De nada, it’s nothing; and now, we try to move on. 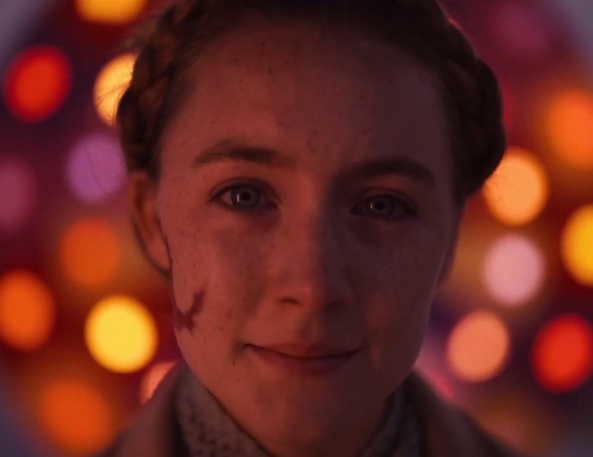 The most important parts of a story are the parts people omit, the abysses they sidestep. Zero gifts the Author with details about Gustave, the hotel, the country, the war, and various colorful supporting characters; in so doing, he hands the young visitor a legacy that transforms him into a legacy himself: a beloved author treasured by his nation. But Zero is not an open book. Whenever he’s about to lose himself in a reverie for Agatha, he catches himself and changes the subject. We often see her from a distance: riding her bike while the soundtrack swells romantically; gazing adoringly at Zero, carousel lights haloing her face. She is a nearly absent presence in the story, by Zero’s choice: a narrative door marked “Do Not Enter.” He won’t speak of her. It’s too painful, and he’s too private.
Advertisement

His need to share his story is keen (Zero approaches the Author, not the other way around), but never so keen that he’s willing to open an abyss and gaze into it. No matter how attentively Zero speaks or listens to his audience of one, some sliver of his mind seems to be on that mountaintop, marrying Agatha under the supervision of his ordained best friend who’ll soon be put down like a dog. He keeps the hotel because it reminds him of Agatha. The painting—a cheeky vision of innocence that he encouraged Gustave to steal, setting the film’s main plot in motion—now hangs behind the concierge desk, and is featured on the backs of the hotel’s menus, where every guest’s dining companion must at least briefly regard it. Zero lives in the past. He invites the Author into it, but not too deeply. Something in Zero is broken; he is in no rush to fix it, and nearly as disinclined to explore it. Remembering is dangerous. He knows this. He helps the Author understand this. It is a simple fact, certified, among many other ways, by the theatrical shadows that darken Zero’s face as he prepares to revisit the past.

The Grand Budapest Hotel is inspired, as a closing dedication card informs us, by the works of Stefan Zweig. The Austrian author fled his beloved Vienna as World War I ramped up and the continent burned. He watched it spiral further into madness during the second world war, then settled in Petropolis, Brazil, and took his own life, along with his second wife Charlotte E. Altmann. His memoir The World of Yesterday is a Proustian love letter to Vienna, the great city he adored, then left because he couldn’t bear to see it soiled by anti-intellectualism and thuggish tribalism. We see bits and pieces of Zweig represented in the film’s story, setting ,and images (including the young Author, the old Author, and Gustave, all of whom physically resemble Zweig in various ways), but as is so often the case in Wes Anderson’s films, The Grand Budapest Hotel comes at reality, historical and personal, in an oblique and fanciful way. This Europe is no more “real,” in the Encyclopedia Britannica sense, than the Rushmore Academy, the 375th Street Y, or Pescespada Island. Yet the characters’ emotions are real, and their deaths feel as real as the blood that spills from Richie Tenenbaum’s slashed wrists and clouds the water near Steve Zissou’s wrecked helicopter. Anderson’s movies are filled with personal abysses, and if the scripts tread lightly around them, it’s only because the characters are living in them, and, on some level, we know it, and we can feel it.

In this way—glancingly, discreetly—the movie honors Zweig’s losses: of national identity, of youthful idealism, of life itself. Fear of loss, and agonizing knowledge of loss, fuel the film’s characters, as surely as it fuels motherless Max Fischer’s productivity and distractedness, Mr. Fox’s reckless adventurism, and the Whitman brothers’ journey across India. In a wide shot of the hotel, we see that it’s built into a mountainside and rises elegantly against it, but down near the bottom of the frame is a hole, and spilling out of it is black coal that’s presumably fed into the building’s furnaces. Loss fuels Zero, a man described by the Author as the only person in the hotel who struck him as “deeply and truly” lonely, and confirms that impression tenfold.

Why does Zero speak to a young writer he meets in the baths? Why does he unburden himself, to the extent that a polite and naturally reticent man could? Perhaps it’s for the same reason that Steve Zissou makes films; that Max Fischer writes and directs plays; that Jack Whitman writes short fiction; that Mrs. Fox paints and Mr. Fox writes newspaper columns; and that Dignan chronicles a “75-year plan” in his spiral notebook: to channel those unexpressed anxieties, give them shape, and, ideally, master them—rather than be mastered by them.

But also, and most importantly, to make sure that some part of each of them lives on. The decay of the body is irreversible,. Death is non-negotiable. As Professor Keating tells his students in Dead Poets Society, someday, we’ll all be fertilizing daffodils. And then what’s left? Stories. The Grand Budapest Hotel treats storytelling itself as an inheritance bequeathed to anyone who’s willing to listen, feel, and remember, then repeat the story, with whatever embellishments are necessary to personalize it and make it mean something to the teller. And so the story begins with a young woman visiting a statue of the Author and staring down in wonder at the (nonexistent) novel that supplied the story we’re about to see, a story set in (nonexistent) country that’s been remade by war, a story told in a hotel that’s been remade by brute force coupled with ideology, a story recounted by an Author who first heard it from a lonely old man who finished his tale with what sounds almost like a benediction: ‘I think his world had vanished long before he ever entered it,” he says of Gustave, his mentor, his father figure, his brother, speaking also of himself, and the Author who’ll spin his yarn into literary gold. “But, I will say: he certainly sustained the illusion with a marvelous grace!” Shortly thereafter, the elevator doors slide shut like a book’s covers closing.

The film’s final moments drive home the notion of stories as inheritances, currencies, legacies, gifts. We see the old Author sitting quietly on a couch beside his grandson. He’s wearing a version of the Norfolk suit he wore the night that he spoke to Zero—a night that we now sense was one of the most important he would ever experience—and he’s in a study (uncompleted, judging from the half-painted walls in the room beyond) whose décor echoes that of the hotel, circa 1968. His grandson is beside him. The old Author’s voice supplants the younger’s: “It was an enchanting, old ruin—but I never managed to see it again.”

Then we return to the young woman in the cemetery as she closes the book and stares at it. Perhaps she’s contemplating the larger meaning of the story she just read, or re-read, and wondering what she’ll take from it, or do with it. Or maybe she’s just thinking she wants to read it again, amid the tombstones. Life destroys. Art preserves.