Interlopers in a Foreign Land: “Beat the Devil” Returns to Theatres

John Huston’s “Beat the Devil” is opening at the Film Forum this February 17th with a new 4K restoration of an unseen and complete uncensored cut. Our Editor-at-Large shares his thoughts on one of the most marvelously odd films ever made.

“To be trustworthy is not more important than seeming to be trustworthy.” That line from “Beat the Devil” is delivered by Peter Lorre, of all people—a marvelous character actor but never one cast for his innate trustworthiness. And that’s the joke. “Beat the Devil,” a 1953 film about a bunch of disreputable people scheming to take control of uranium deposits in British colonial Africa, is a movie that always knows exactly what the joke is. And it’s often a funny joke that lands with a sting.

Directed by John Huston from a screenplay co-written with Truman Capote, this curiously laid-back film, which is being re-released to theaters this week in a new digital version, has been described by critic Dave Kehr as “the birthplace of camp.” I’m not sure camp is the correct word for what “Beat the Devil” is, but we might as well just go ahead and accept it in the spirit of a self-aware, often self-deprecating movie that’s filled with characters who always feel emboldened to make up whatever story they wish and represent themselves and their motives however they see fit, and even filch each other’s words when it suits them. Several times in the film you hear a character trot out a particular observation or turn of phrase and then hear it repeated by another character who was there when they said it, in a different context, as if they just made it up on the spot.

“Beat the Devil” has also been described, incorrectly, as a movie that was just made up on the spot. There’s a bit of truth to this description—Huston threw out the original screenplay and hired Capote to write a new version on location, turning in new pages the night before they were to be shot—but it only takes us so far. The film is loosely based on a novel by James Helvick (a pseudonym for English journalist Claud Cockburn, father of journalist Alexander Cockburn), so it’s not as if the cast and crew were just making everything up as they went along. They had situations, characters and a plot going in, and even if you end up departing from that sort of template during production, it helps tremendously to have one, because it means you’re not flying completely blind.

Nevertheless, the gun-to-the-head, just-get-it-done production schedule contributes to the overall effect. Although Huston could succumb to the lures of bombast and bloat in his more outwardly respectable movies, such as “Moby-Dick” and “The Bible,” whenever he made thrillers and adventure films about ruthless people, such as “The Maltese Falcon,” “The Asphalt Jungle,” “The Treasure of the Sierra Madre” and “The Man Who Would be King” (the latter are also about interlopers in foreign lands, interestingly), he was sharp and unsentimental, sketching his scheming, often talkative characters in spare brushstrokes and moving his camera to comment on their shifting power relationships. He’s at his best here, although the low-stakes plotting, which assures us that everything onscreen is a lark and nothing too traumatic will happen, consigned “Beat the Devil” to the status of minor Huston for a long time. 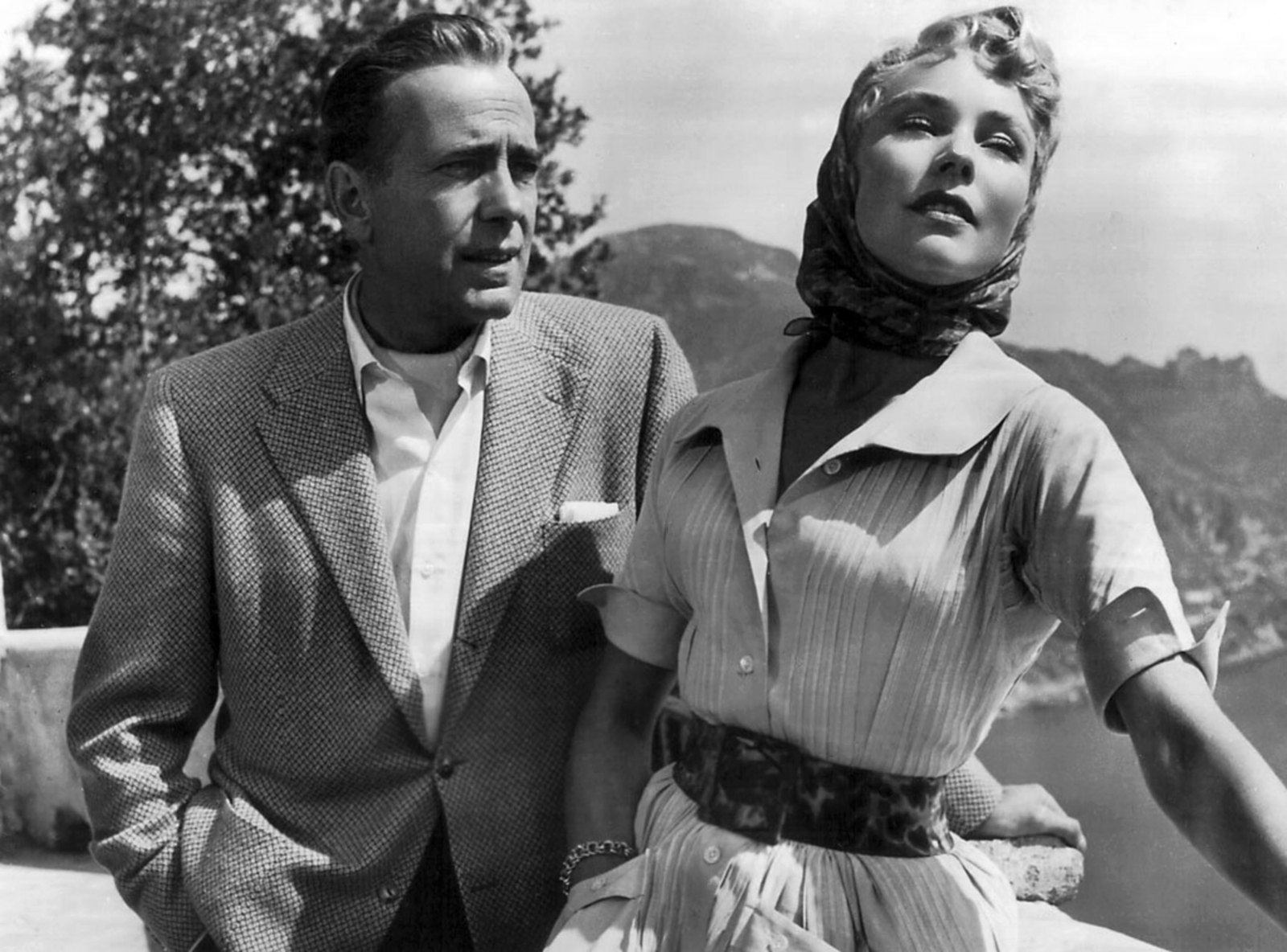 The plot is complex, though to Huston and Capote’s credit, it’s not that hard to follow if you’re paying attention. Billy Dannreuther (Humphrey Bogart), a once rich man who lost his fortune, is living in an Italian port city with his wife Maria (Gina Lollobrigida), plotting with four deeply untrustworthy men (Lorre, Robert Morley, Ivor Barnard and Marco Tulli) to grab some uranium-rich land in British colonial Africa. They’re hoping to leave on a boat, but there are technical and staffing problems (the captain is a drunk). The first half of the film is all buildup to the voyage, which, let’s say, does not go as planned. Along the way, the Dannreuthers encounter another couple, Harry and Gwendolen Chelm (Edward Underdown and Jennifer Jones). Gwendolen falls for Billy, or at least we’re led to believe she does—like Bogart’s relationship with Mary Astor in “The Maltese Falcon,” we feel sure that ulterior motives complicate any sincere affection.

Harry is not the seemingly clueless person he appears to be, either. Nobody in this film is quite as advertised, and that’s part of the fun of watching it. Characters that seem like incompetent blusterers or hangers-on prove unexpectedly resourceful, and ones that seem formidable reveal weaknesses we might not have imagined when we first met them. Capote has a lot of fun with the actors’ apparent miscasting. Lollobrigida’s character carries on like a stereotypical tea-and-crumpets Englishwoman, though without the accent, of course, and in time. you accept her as an Italian Angolophile (or something). Lorre, an Austrian Jew, plays a character named O’Hara, and explains, “Many Germans in Chile have come to be called O’Hara,” looking as if he can’t quite believe it, either. (His cigarette holder deserved its own screen credit: from a distance it looks as if Lorre is smoking a fine artist’s paintbrush.) Huston, who devoted a great deal of energy toward polishing his own image as a globetrotting macho adventurer, is very much at home directing a movie about a bunch of Westerners who are out of their element but protected by racial and economic privilege; to his credit, he makes them all seem slightly ridiculous, sometimes more than slightly. As Ebert wrote, “Once we catch on that nothing much is going to happen, we can relax and share the amusement of the actors, who are essentially being asked to share their playfulness.” 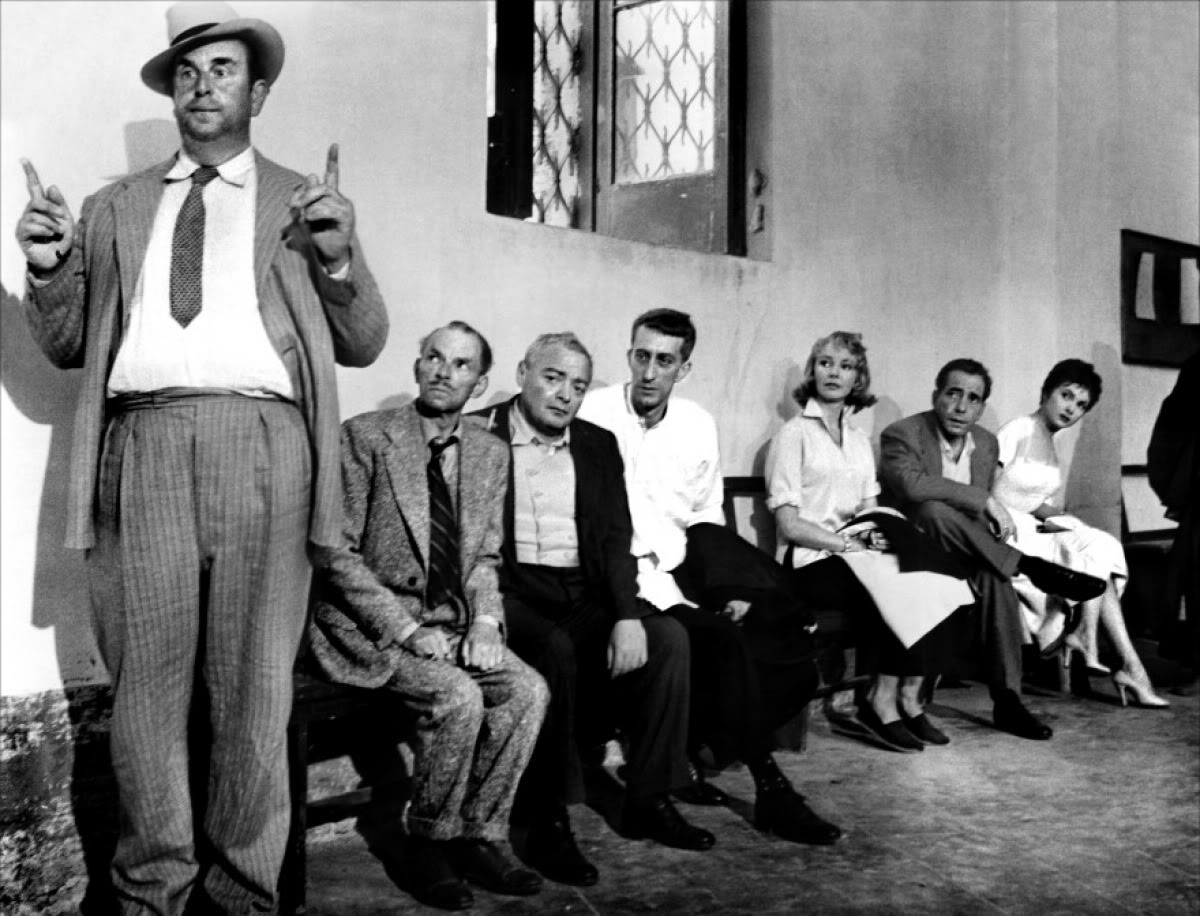 Bogart hated the movie, and after its release declared, “only phonies like it.” He signed on to the project because he wanted to make a serious anti-colonial statement, and when “Beat the Devil” turned into something more overtly light and “just kidding,” he soured on it. But you can’t tell that from his performance. He excelled at playing characters who knew themselves well and were good at sizing other people up and seeing through their cherished delusions, but who nevertheless succumbed to basic instincts anyway—greed, desire, rage, vengeance—and remained tragically self-aware as they went down in flames. That’s Billy. Bogart gets Billy. You can tell he likes playing him, that the character fits him like the character’s tailored suits.

Capote wrote witty dialogue for all of the film’s characters—although he sometimes overdoes it with the literary allusions and quotations, a characteristic of many novelists and playwrights writing screenplays for the first time—but he outdoes himself writing for Billy, which makes me wonder if he saw something of himself in Bogart’s cynical raconteur personality. Some of Bogart’s lines here capture the essence of his appeal, especially the self-lacerating wit that hints at tremendous (though cleverly disguised) self-confidence: who else but a supremely self-assured man could diminish himself so precisely? “Doctor’s orders are that I must have lots of money,” he tells Gwendolen, “otherwise I become dull, listless, and have trouble with my complexion.” In a conversation earlier in the movie, he hears men divided into two categories, the “rare spirits” and the ones that are variations of a type. “Well, if you must know, I’m a typical rare spirit,” he says. What a magnificent voice Bogart had: authoritative but jocular, at once the embodiment of 20th century urban masculinity and a joke on it. We could listen to him read words off street signs and be mesmerized; that he often spoke memorable dialogue feels like a bonus. In another scene, Jones’ character admits that during a conversation the preceding day, “I was listening to your voice, I wasn’t listening to what you said.” You know just what she means.