For the love of it: notes on the decline of Entertainment Weekly, the firing of Owen Gleiberman, and the ongoing end of an era

Owen Gleiberman's sacking as lead film critic of Entertainment Weekly — part of a ritual bloodletting of staffers – marks the end of an era.

I was an early subscriber to the magazine. EW began in 1989. It aimed to take insider-type entertainment news mainstream by merging it with gossip and lifestyle reporting. In any given issue, EW's cover story, secondary features and sidebars read like weird fusions of Variety, The Hollywood Reporter, the now defunct Premiere, and the syndicated infotainment program Entertainment Tonight, with a touch of Spy magazine's cheekiness.

Amazingly, though, the meat of the magazine (for me and my film major pals, anyway) was its criticism of movies, TV shows, books and music. People consumed the features and cutesy lists, but they thought about the reviews. Lisa Schwarzbaum, who left the magazine last year, and Owen were the lead movie critics. Both were strong in their own ways. Lisa was direct, passionate and irreverent. Of the two, she came closer to being all things to all people. Owen had a touch of alternative newspaper spikiness to him—a vestige of his years at the now defunct Boston Phoenix, the paper that nurtured Charles Taylor, Stephanie Zacharek, Tom Carson, Michael Sragow, and my New York magazine colleague David Edelstein. Although I didn't know it at the time, I was an alternative press guy at heart. That's why Owen's reviews appealed to me. He wrote like a weekly critic rather than a daily critic: which is to say, he wrote like somebody had been told he didn't have to appeal to every person who ever walked, only people who really cared about his subject, and was liberated by that knowledge.

Owen didn't just write about a film's plot and characters, he talked about the style, the mood, the worldview. He put the movies in context. But he also captured their essence. He was a bit of a Pauline Kael disciple, and he wrote in that spirit, jamming adjectives and adverbs together like a rock lyricist, hammer-and-tonging the language into doing what he needed it to do. Writing on "Pulp Fiction"—a film he proclaimed " the "most exhilarating piece of filmmaking to come along in the nearly five years I've been writing for this magazine"—he observed that Samuel L. Jackson "just about lights fires with his gremlin eyes" as Jules, and "transforms his speeches into hypnotic bebop soliloquies. Jules the loquacious hit man is the soul and spirit of Pulp Fiction — fury reined in by order." Of Oliver Stone's "Nixon," he wrote, "Even those who didn't respond to 'Natural Born Killers' may now have a sense of what Stone's turbulent, hallucinatory style is all about. More than any director before him, he has captured the violent free-associative rhythms of a feral, jagged modern mind. The shock cuts from color to black and white suggest a sudden X ray into the characters' souls. The contrasting film stocks (newsreel for Nixon's college-football days, grainy video for a '70s press conference) create a media-age kaleidoscope, a fever dream of memory and mood."

I loved the idea that a guy like that, a film geek through and through, could get a job at a Time Warner publication that you could buy in supermarkets and at airports. It gave me hope. It gave a lot of aspiring critics hope. 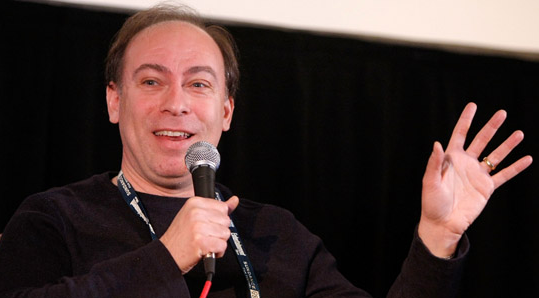 I just realized to my horror that I am writing about Owen as if he is dead. He's not! He's alive and well, and for all I know  he might be looking for work again soon, in an increasingly crowded, increasingly dispirited field. Journalism isn't dead, either. But anyone with eyes can see that it's looking a bit green around the gills.
Advertisement

What really depresses me about Owen's firing isn't just that a fine writer got axed from a magazine that he helped define. It's that the journalism industry, if you can even call it that anymore, is unwilling or unable to support writers like Owen, or Lisa, or … I was about to list other critics I admire who've been fired or bought out in the last decade, but I won't. It's too depressing. And it doesn't get at the bland mystery of what's happening to the business that nurtured me: an eerie mix of bean counting, soul-rot, and page-click pseudo-science gone mad.

Magazines are, by and large, wasting away, save for a hardy handful that have extremely specific beats (Guns & Ammo, Maxim, Modern Bride) or affluent readerships. Daily newspapers, once the unglamorous cash cows of media corporations, have been largely reduced to husks. My old employer, The Newark Star-Ledger, where I once shared a TV criticism beat with Alan Sepinwall of HitFix, just announced that it will lay off 167 people, 40 of whom work in its newsroom; this is merely the latest workplace amputation by the paper's owners, the Newhouse family's Advance Publications. MSN, Yahoo and other sites that used to publish decent criticism, plus entertainment reporting with actual reporting in it, have stopped doing so, or cut back to almost zilch. Across the spectrum of what was once called journalism, the combination of news, analysis, opinion, photos and charts that we used to identify as "news" has increasingly been replaced by "content."

And what pitiful content it is. On film and TV sites, "content" often refers to links to the latest studio-approved teaser, or trailer, or poster, or set photograph (with some variation of "Tell us what you think in the comments!") or a listicle or quiz, or maybe a repurposed and aggregated (i.e. rewritten) observation about this movie or that TV show—or worse, to a celebrity scandal that supposedly illustrates some larger social issue but is ultimately just that old hooker Gossip wrapped in the shiny fake fur coat of undergraduate sociology ("What our Fascination with Justin Bieber Says About Us").

Here and there you find success stories, or what pass for success stories, in this Hobbesian landscape. The Huffington Post and other sites that lean on aggregation and unpaid content are beefing themselves up editorially, even hiring experienced professionals of various types. That's good.

But none of this changes the fact that the story of journalism in the early 21st-century is depressing. Both the readers and media company owners want something — meaning stories, or "content" — for nothing, or almost nothing. And if they can't generate content for nothing or next to nothing, they'll make do with "aggregated" content, or with what amounts to free advertising: whatever drives pageviews.

As if to add insult to injury, EW's announcement of layoffs came just a few days after its decision to open its "platform," i.e. the publication, to "the people formerly known as the audience." In regular human-speak, that means they want to get people to write for free so that they don't have to pay anyone to do it. Yes, publications have always employed interns who worked in exchange for bylines. But in the past, there was light at the end of the tunnel of white-collar indentured servitude. Interns were there to learn a trade, like apprentice plumbers or electricians. It was understood that at some point they'd go out into the world and be able to earn a living doing the thing they'd just spent months or years studying. They weren't being conditioned for a world in which every writer was basically an intern. As NPR's Linda Holmes observed, "the thing that's scary about the EW 'write for free' business model is that people used to write for free hoping to get paid by EW someday."

There are, I'm sure, many complex, overlapping and perhaps contradictory reasons why media companies have no interest in publishing properly compensated criticism by informed and seasoned writers.  I don't pretend to understand all of them, although I suspect the die was cast in the late '90s, when newspapers and magazines bowed to tech gurus and prognosticators and started giving away their content. This made everyone—but particularly the younger generation—get used to thinking that writing was something they were entitled to have, like air or water; that it was not really valuable, indeed that it was not really work; that it was not really something that was "made"; that was not creative, and that for all these reasons it was not supposed to be compensated by anyone, not in any real sense—that it was, instead, a combination of entertainment and personal indulgence, something along the lines of an open mic night in print form, with people trying out "material," basking in the applause ("exposure"), and maybe picking up a little walking-around money. Like a violin player at a bus stop.

Whenever I dig into this topic, I get pushback from people who point out that the newspaper and magazine industries as we once knew them also employed mediocre or unoriginal writers and editors. Those people's inability to earn a living now, however personally devastating it may be to them and their families, is no great loss to readers, I'm told—or to the universe as a whole. That might be so. I can't imagine the coldness required to try to decide such a hypothetical question, so I'm just going to let it lie, except to say that I would happily live with knowledge of a 90% worthlessness rate in journalism if the tradeoff were employment for writers of Owen Gleiberman's caliber.

It's well and good to say that we critics should be doing it anyway, For the Love of It—that all this harshness is a test of our collective dedication, and we should look at criticism, or entertainment reporting, as a calling or an avocation, or maybe a hobby, and quit griping.

I would ask anyone who might say such a thing to take a look at their own profession and the paycheck they receive for practicing it, and ask how they would feel about being told that from now on they should do it just "for the love," with no hope of earning a proper living at it.

Yes, this is the way of the world. Yes, this is how things increasingly are done. I know. I get it.

It's still not right.