Lana Wood was easy to lift, and that, in large part, led to her being cast in her first major feature film. She was eight-years-old. The film was “The Searchers,” and it was necessary that John Wayne, as “prodigal brother” Ethan Edwards, be able to pick up the child actress portraying his niece, Debbie, for whom Ethan will embark on a relentless five-year search after she is kidnapped by Comanche chief Scar.

John Ford’s masterpiece, released in 1956, was ranked by the American Film Institute as the greatest western ever made, and, in 1989, was among the first 25 "culturally, historically, or aesthetically significant” films to be inducted into the National Film Registry.

On Thursday, September 15, the Pickwick Theatre in Park Ridge, IL is hosting a 60th anniversary screening of “The Searchers” as the season opener to its monthly Park Ridge Classic Film series. Lana Wood, one of four key surviving cast members, will speak at 7 p.m. prior to the film. Six decades later, do you think Wood, who, again, was only eight-years-old during the production, would have only hazy memories about making the film? That’ll be the day.

“I remember every second about it,” she said ebulliently (which seems to be her natural state) in a phone interview.

At the time, her older sister Natalie was the actress in the family. “The only thing I thought about was reading Peter Pan, writing short stories, playing with my animals, climbing trees and roller skating,” she said.

Natalie was cast as grown-up Debbie, and so it was a no-brainer that Lana be cast as young Debbie. “All I know is my mom said, ‘You’re going to go and meet with these people who are making the movie your sister is doing,’” she recalled. “I did what I was told. I didn’t become rebellious until I was about 13.”

John Ford was not on Lana’s radar. Neither was she that familiar with John Wayne. Her movie stars of choice were Fred Astaire and Ginger Rogers, William Powell and Myrna Loy in "The Thin Man" series, Abbott & Costello and Laurel & Hardy. She stayed up late at night to watch their films on television.

But Wayne, she said, was “very pleasant and lovely” on the set. “He used to bribe me with his black currant lozenges. They were great. He’d pass me this box and say, ‘Take one,’ and then, ‘Take another one.’ He was very sweet.”

Co-star Jeffrey Hunter made an even bigger impression. “He was absolutely amazing to me,” Wood enthused. “Everybody else would say good morning to me and ruffle my hair. He would sit down on the ground and talk to me. Was I alright? Did I want to talk about anything I had to do in the film? Of course, I was mesmerized by those blue eyes.”

Even Ken Curtis, who would later become better known as Festus Haggen on TV’s “Gunsmoke,” would whittle carvings to give to her.

John Ford; not so nice. “He hated children,” Wood said with a laugh. One of the few times he spoke to her was to growl a direction—to bend at the waist in the scene where young Debbie runs to the family graveyard to hide from the marauding Scar. “I was absolutely frozen with terror,” not of Scar, she clarified, but of Ford.

Wood can lay claim to being responsible for a blooper in the film that I, for one, had never caught. It occurs in the scene in which Ward Bond’s Rev. Captain Clayton is deputizing Jeffrey Hunter’s character, Martin, who will accompany Ethan on his obsessive half-decade-long search. Clayton is interrupted at one point after saying the oath, “faithfully discharge.” When he asks young Debbie where he left off, Wood replies, “faithfully fulfill.” Bond plows on, “Faithfully discharge.”

“I changed it and nobody said a word,” Wood said. “It sticks out like a sore thumb to me, but no fan has ever mentioned [it].” 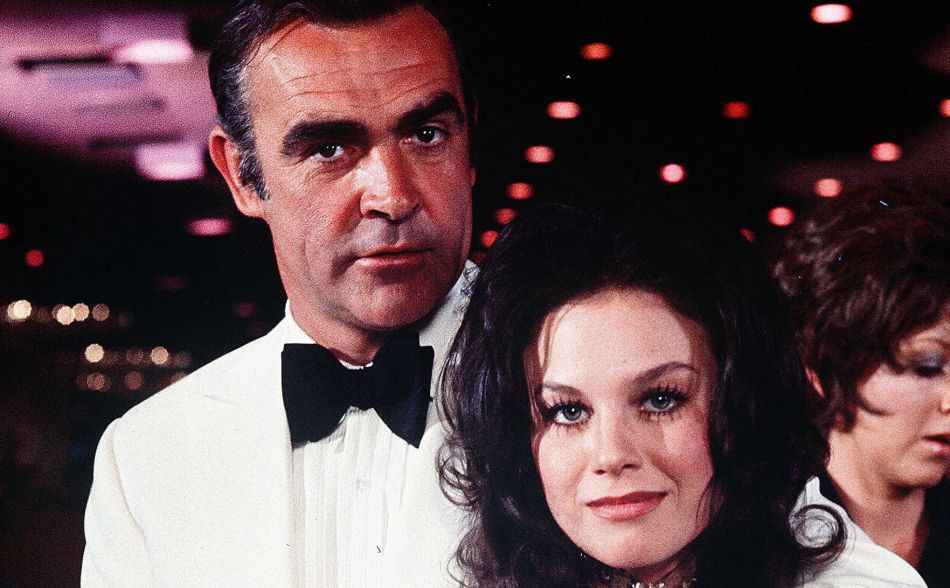 “The Searchers” is but one career highlight for Wood. She is best known for her fleeting but indelible role as Plenty O’Toole opposite Sean Connery’s 007 in “Diamonds are Forever.” She probably gets asked about that one the most (usually along the lines of, “How did Sean Connery prepare to play James Bond?”), but Wood’s estimable resume contains memorable appearances on such iconic TV series as “Have Gun - Will Travel,” “Walt Disney’s Wonderful World of Color,” “The Fugitive,”  “Night Gallery” and “Peyton Place,” in which she starred as abused wife Sandy Webber. Don’t get her started on co-star Ryan O’Neal. “He endeared himself to me by eating while standing next to the camera [when he was supposed to be interacting with her] while they were filming my close-ups,” she laughed ruefully. “I wanted to throttle him.”

Perhaps the project she is most proud is one of her smallest roles. It was the miniseries “QB VII,” based on the book by Leon Uris. “I lost an agent over it,” she said. “They said the role wasn’t big enough. I wanted to be in it and work with Anthony Hopkins and Ben Gazzara. I was told they would no longer represent me if I took the part. I said, ‘Goodbye.’”

Another cherished memory is becoming friends with her lifelong movie idol Fred Astaire on the set of the 1970 made-for-TV movie, “The Over-the-Hill Gang Rides Again.” They bonded over a shared favorite song, “A Needle in a Haystack” from “The Gay Divorcee.” Astaire would gift her his original sheet music for the number.

In recent years, Wood has become a fan favorite at Hollywood nostalgia and Western movie conventions. And there’s still plenty of work. In October, she will begin filming a faith-based production, “Wild Faith.”

60 years on, Wood said she never ceases to be amazed “what a remarkable film ‘The Searchers’ is. I am so proud of the fact that I am in it.”

“The Searchers” has served as acknowledged inspiration for such disparate films as “Star Wars,” “Hardcore” and “Taxi Driver.” Wood gets continual reminders of the film’s influence. “There was a film I saw last year,” she said, blanking on the title. “The mom comes out onto the front porch and holds her hand up shielding her eyes and you see the lone rider. I pointed out to a friend of mine, ‘That’s ‘The Searchers.’ That’s dead-on ‘The Searchers.’”

"The Searchers" will screen at the Pickwick Theater in Park Ridge, IL on Thursday, September 15, at 2 p.m. and 7 p.m. Lana Wood will be at the 7 p.m. screening. For more information on the screenings and the Pickwick Classic Film Series, click here.