Guy Green’s 1965 gem, “A Patch of Blue,” cast Elizabeth Hartman as a blind white woman who falls for a black man (Sidney Poitier), whose tenderness sharply contrasts with the abuse she routinely suffers at the hands of her mother (Shelley Winters). Hartman is unaware of Poitier’s race, yet that issue never seems to cross her mind. The feelings she has for him are all that matter. That’s certainly true of the undeniable love between Richard and Mildred Loving, a real-life interracial couple who took their battle for civil rights to the Supreme Court, leading to a landmark ruling that invalidated any law prohibiting their marriage. Loving v. Virginia occurred two years after Green’s film was released, and Jeff Nichols’ new drama, “Loving,” harkens back to that period in cinema where character studies devoid of gimmicks were considered marketable. Joel Edgerton and Ruth Negga deliver beautifully understated performances as Richard and Mildred, impeccably matching the subdued yet eloquent tone of Nichols’ script and direction.

RogerEbert.com spoke with Nichols about his meticulous approach to sound design, his love of “The Andy Griffith Show” and why dialogue is overrated.

Were there people from your own life that inspired your portrayal of the Lovings’ story?

Very much my grandparents. There’s a direct connection between Richard Loving and my grandfather—and these comments are about marriage and commitment, obviously not about race. You could sit with my grandfather for several hours and share just a handful of words. When you are married to a man like Richard or a man like my grandfather, it falls upon the wife to be the vocal advocate for the emotions in the family. My grandmother was the one who was the leader in a way, certainly emotionally and vocally, and Mildred has to take up that mantle in this relationship. You see Mildred evolve from a 19-year-old girl into this woman who is taking responsibility for the situation that she and Richard have found themselves in. She writes a letter to Bobby Kennedy, while continuing with the pursuit of this legal battle. She not only had to do what my grandmother did, which was become the voice of this couple. She actually had to be the instrument of change that started to drive this historic ruling. Now she did it in a very quiet and elegant way, but that doesn’t make her any less active in my opinion.

I love how you recreate the photo of Richard resting his head on Mildred’s lap as they relax on the couch while watching TV. When you put a human face on an issue, as this photo did, it makes the issue much harder to dismiss.

That’s what is at the heart of this project. We have a problem with dealing with race in our country. We have a problem with dealing with marriage equality and equality in general. These are complex, divisive issues in our society, and I think that the only way we further this conversation is to take them down to a very human scale. Richard and Mildred provide a very human point-of-view to this issue. They weren’t part of a particular movement. Their act of being married wasn’t one of defiance, it was one of love, and I think because of that, you are able to take these polarized points of view and points of discussion and bring them down to a very simple humanistic level.

What made you choose “The Andy Griffith Show” for them to watch in that scene?

There are other photographs taken by Grey Villet of that moment, so you could tell they were watching television, but I could never tell what was on TV specifically. I have always loved “The Andy Griffith Show,” and plus, you’ve gotta think, there were only a handful of shows on TV back then. They didn’t have a lot of options. It just felt so quote-unquote normal for them to be watching “Andy Griffith.” I watch that show now, and it still makes me laugh. We found an episode where Aunt Bee makes pickles that are terrible but everyone has to be pretend that they like them, and it’s just funny. When we filmed the scene, we had to do a take with the sound playing and a take without in case we couldn’t get the rights to the footage. I love the take with the sound because the laugh track is going and you hear that laughter blend with Joel and Ruth’s laughter. You feel like they’re really laughing in that moment, and there is a transference that happens when audiences see characters laugh onscreen. At that point in the film, it was desperately needed. It provides everyone with a breath of relief.

The restraint of the storytelling is a bold choice, and it is true to who these people are.

I knew that I had to stick with the Lovings. By making them the point-of-view characters, you have to try and represent what their point-of-view was, which had a simple elegance to it, certainly in the case of Mildred. Richard has a frustrated defiance that is caused, in part, by his inability to articulate that frustration, as well as what was viewed, during that period, as his inadequacies as a man. How frustrating must it have been for Richard to find himself unable to take care of his family. These are the things that I find really, really interesting, and they might not be verbal. It’s so funny how much people talk about dialogue, since there’s so much going on that has nothing to do with dialogue. These are people for whom words don’t come first. That’s just the nature of who they are—Mildred much less than Richard, obviously, but that suits my style of filmmaking. It was a story I felt like I knew how to tell, and people who I felt like I knew how to highlight. 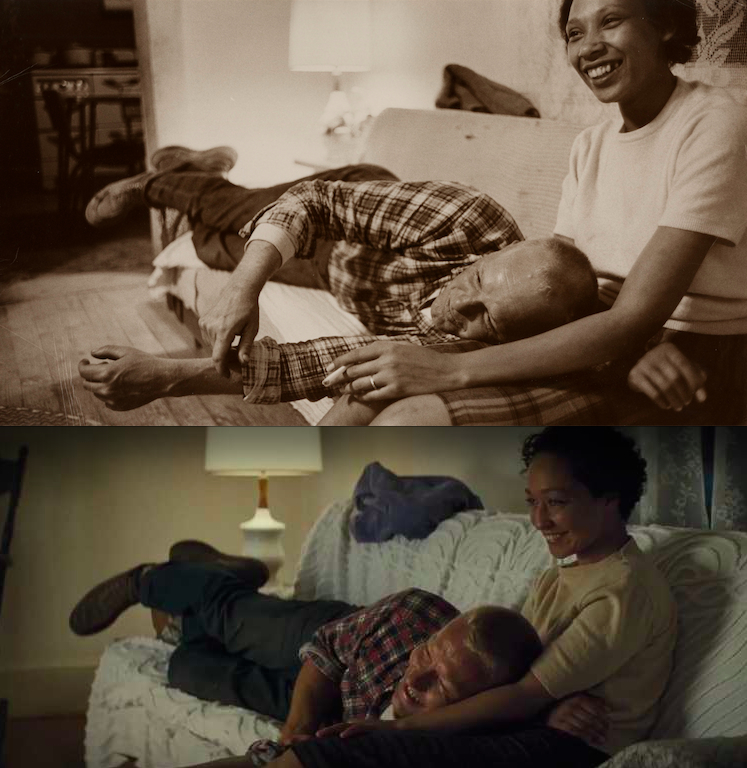 Your films never fail to jolt me with their visceral sound design, and “Loving” is no exception.

Part of it is the technique of quiet, especially in the case of “Loving.” With “Midnight Special,” the sound was used as a narrative construct. The audience is looking in one direction when a sound suddenly erupts from the other direction. That happens in “Mud” too when Matthew McConaughey is having a conversation with the boy in his bedroom and the shotgun blast happens. You can always watch the audience jump during that moment. I’ve worked with Will Files since “Take Shelter,” and he has an innate understanding of perceived reality. Films are fake, movies are fake, everything about them is fake, and it’s our job, especially with stories like this one, to tamp down that artifice as much as possible and make it at least resemble reality. Will’s great at that, and sound is a really great way to pay attention to it. We spent so much time on the background crickets for the opening of the film, because we had a few iterations that were too much, and then a few iterations that weren’t quite enough. Inevitably one bullfrog would jump in and then we would have to go delete it. You don’t want anything to be overt or artificial. It’s a dance that we do in every department and every facet of the filmmaking, from the writing to the production design. If sound is done well, no one will ever notice it. They’ll just feel it.

You can feel the audience tense up every time a car approaches the Lovings’ house.

Yes, the sound of that motor when he hits the gas is harsh and aggressive, but then again, so were those cars back then.

Michael Shannon has one scene as photographer Grey Villet, and he fills the performance with intriguing nuances, such as when he takes a picture of Mildred at the sink.

Well he definitely admires her in that moment and wants to capture it, but he also sees how shy she is. Mike will give you every single edge of that surface. That’s what he does. When the producers first approached me, they assumed I would want Mike to play Richard, and I was like, “Nope, he doesn’t look like him.” I started looking at photos of Grey Villet, and realized that he looks like Mike with those big glasses on. He and Mike are both tall guys, yet the only difference was that Grey came from South Africa. We figured that Mike speaking with a South African accent would be too bizarre. Nobody would understand that decision. But we talked a lot about him being gregarious. Grey Villet has to come into these people’s lives in a very short period of time. He has to ingratiate himself to them so that they feel comfortable enough to let him take photographs, and I just thought, ‘What a great part for Mike to play.’ People are always talking, very boringly, about how he is a great villain because of his countenance, but that’s not the way I see Mike at all and I never have in any of my films.

What made you go to such remarkable lengths to cast actors who resembled the real people?

I felt we had to. It wasn’t because anyone in the audience would care, but I had a mental picture of them in my mind, and it was important to me. Look at a photograph of Richard’s mother, who’s in the documentary [2011’s “The Loving Story”] and look at the amazing actress [Sharon Blackwood] that we have cast in that part. Google a photograph of Bernie Cohen, the lawyer, and then look at Nick Kroll. Go hear Bernie Cohen in the documentary and then listen to Nick Kroll. Bernie had this quality of performance, and a lot of it is because, in the archival footage, a camera is on him. It was like he was performing, but I also felt like it could happen in the scene where he first meets Richard and Mildred. There are no cameras in the room, but he is putting on a performance to persuade them that he is the right lawyer for their case, even if he isn’t entirely sure of that himself. At the end of the scene, you see him sort of break character.

There is such power in how Richard uses as few words as possible to convey the depth of his feelings when he says, “Just tell them I love my wife.”

It makes you pay attention to the words that are there. That’s certainly an effect of the style. It’s interesting—the older I get and the more that I do this—I’ve become less and less interested in rewriting. I do so much outlining up front. The narrative design of these films—such as dialogue and character behavior, which I think of a lot more than plot—has been worked out so thoroughly in my head that by the time I get to a second draft, it’s rare that I’m dealing with big plot mechanics or behavioral mechanics. With this script, I only had to fix about five typos in the second draft, and it hasn’t changed much since. The film very much reflects the script that was on the page. McConaughey always used to compliment me about that when we were making “Mud.” He’d tell me, “I’ve never worked on a project that didn’t change.” And I’m really proud of that fact.