Occurring Behind a Curtain: Logan Lerman and Sarah Gadon on “Indignation”

I remember the precise moment when I became a fan of Logan Lerman. It was during the scene in Stephen Chbosky’s wonderful 2012 teen drama, “The Perks of Being a Wallflower,” where his introverted character, Charlie, finally gains the courage to raise his hand in class. With every awkward flinch and labored gesture, Lerman deftly conveyed the predicament faced by every adolescent when expressing their individuality. How do you acquire confidence when you feel utterly uncomfortable in your own skin?

“Indignation,” the directorial debut of Ang Lee’s longtime producer, James Schamus (“The Ice Storm,” “Brokeback Mountain”), is an equally nostalgic coming-of-age tale, albeit a much darker one. Lerman delivers his best work to date as Marcus, a Jewish atheist who enrolls at a university to avoid enlisting in the Korean War. Two major distractions to his studies materialize in the form of Olivia (Sarah Gadon), a beguiling peer who takes a liking to him, and Hawes Caudwell (Tracy Letts), the disapproving dean of men. The prolonged debate between Lerman and Letts in the dean’s office may be the finest cinematic showcase to date for author Philip Roth, whose 2008 book has been adapted by Schamus for the film. That scene alone is worth the price of admission.

Lerman and Gadon spoke with RogerEbert.com about the film’s ’50s-era time period, Schamus’ bold approach to filming dialogue and Philip Roth’s response to the film. (Caution: Spoilers ahead.)

Logan, in “Perks of Being a Wallflower” and “Indignation,” you have proven yourself gifted at portraying characters struggling with different types of repression.

Logan Lerman (LL): Both of those characters you mentioned are searching for something. They’re searching for a greater purpose and trying to understand how to live their lives the way that they want to live them. That would be a similarity between the two, though they are very different characters. Marcus’ journey is a reflection of the time period and what was socially acceptable in the 1950s. When I first read the script, my reaction to it was visceral. I fell in love with the delicious dialogue and the rich, well-defined characters, and I just knew that I wanted to be a part of it. I started working with James early on, and my role as an executive producer was more about being involved in the conversations of putting the film together. I didn’t have to do much work because James is the most experienced first-time director you could imagine. He knows how to make a film. It’s not his first go at this—it is, but it isn’t. He knows what he’s doing, and I learned a lot from him. Being a producer with a first-time director who knows what he wants but doesn’t know how to go about capturing it is a much different experience.

I was struck by how much poise and strength Sarah exuded as Olivia, who doesn’t at all resemble the stereotypical depiction of a “damaged woman.”

Sarah Gadon (SG): James felt that Philip Roth was very influenced by Sylvia Plath when he was writing the novel and crafting the character of Olivia, and so he suggested that I revisit a lot of her work. I think the best source for me was reading the Plath journals and realizing how brilliant and funny and positive she was at times. She was a complicated person and wasn’t always just playing into her neuroses, so I think that was a real opener for me. As much as Olivia carries around the weight of her past, there is still a vibrancy to her, and she becomes this light that is switched on when she meets Marcus. She is excited that she’s found someone who is like-minded and different.

It’s still uncommon for a film to explore male sexual repression as frankly as this one does. Marcus’ reaction to his first sexual experience is so different from the usual Hollywood portrayals of guys losing their virginity.

LL: Again, it’s a reflection of the time period. That helped me wrap my mind around Marcus’ reaction to that moment. It was hard for me to understand Marcus’ perspective and why he felt so bothered by the experience. It took a lot of understanding of life in the 1940s and ’50s—and specifically of the climate in Newark—for me to make sense of why that bothered him. You really have to take yourself out of it when you’re watching it. We’re going back to a time when people lived by a different set of social rules.

SG: There was really no dialogue about any of these things back then. That’s what I think is so interesting about the film. When Olivia goes away, she just disappears without any explanation. There’s a curtain that certain things occur behind, and there’s a lot of confusion and mystery surrounding those things. 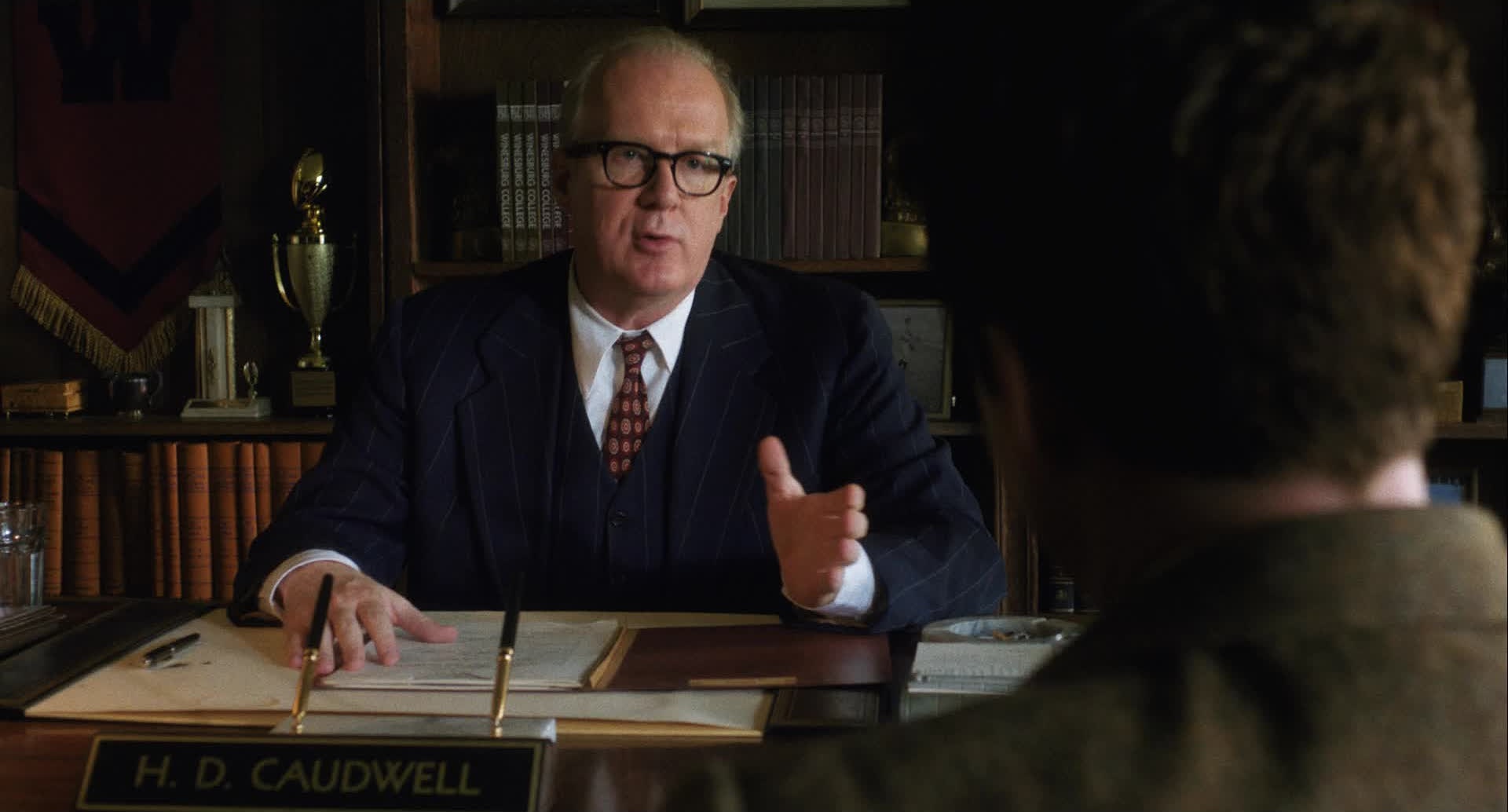 How did you and James approach making the film’s dialogue cinematic?

LL: First of all, I must say how rare it is to find a script that has scenes like these containing such interesting conversations. I’ve talked to filmmakers who have seen the film and they’re like, “Man, I want to write more scenes like that.” The film shows that it is possible to entertain your audience with dialogue. I think filmmakers are afraid that they are going to lose their audience’s attention with long scenes featuring lots of words. James’ decision was to be minimalistic—to not move the camera, to have stationary setups and to be on sticks and let the actors play.

The strength of the writing will either captivate the audience or it won’t. In that sense, it’s a very bold decision because a lot of filmmakers are afraid not to entertain. They want their scenes to be quickly paced with a lot of movement and specific specialty shots to highlight certain moments so that the audience knows when to really pay attention. James wanted to keep it still and let us do our thing, which then really puts the responsibility in the hands of the actors and the material itself to be entertaining. If people are entertained when they watch it, it’s attributed to the strength of James’ writing as well as Philip’s writing. A lot of the dialogue was copied, pasted and reformatted from Philip’s novel, though James did add a lot to it.

Was Philip Roth involved at any stage of production?

LL: No. I believe what happened was that James had been communicating with Philip and asked him if he wanted any involvement in the project. James sent him the script and Philip replied, “Just let me know when I can see it.” That allowed James to feel creatively liberated to do whatever he wanted with the material. Philip eventually saw the film and he told our producer, Anthony Bregman, that this was the first time he felt satisfied with one of his adaptations. He really likes the film and has given us a lot of freedom to do what we want with the book. I believe they will soon be rereleasing the book with a cover [referencing our film].

One notable alteration from the book is how Marcus’ ultimate fate is revealed. Early in the book, it is clearly stated that he dies.

LL: In the film, it does too, but it’s more subtle. He starts speaking from the perspective of the afterlife in the middle of the film and you either catch it or you don’t.

That approach is more akin to “American Beauty,” another story of indignation and repression, which you have cited as one of your favorite films.

LL: Definitely, that film was one of my creative inspirations for sure.

SG: Isn’t “The Ice Storm” sort of similar as well?

LL: Yeah, they complement each other in many ways.

Everyone is talking about the Tracy Letts scenes, though I found the scene between Marcus and his mother (Linda Emond) to be equally strong. Do you believe Marcus and Olivia’s relationship would’ve been sustainable had the mother not issued an ultimatum?

SG: I would say probably not, in the same way that your first love is never really that sustainable. I think that’s kind of what they are to each other.

LL: I’m a hopeless, hopeless romantic. I’d like to hope that there’s a chance that they could work it out, but that’s probably a very naive perspective on it. I think I just watch too many American movies.

SG: I prefer the European films that are like, “No, it’s over! They both die. The End.” [Laughs]

LL: It’s funny, I really think that movie theaters have served as a synagogue or temple for me in terms of developing my moral compass. My naiveté perhaps stems from seeing so many happy endings where people work through tough relationships. That’s probably why I’d like to believe Marcus and Olivia could’ve made it work.