For a polite guy who still refers to women as "ma'am," Matthew McConaughey makes for one highly convincing booze-guzzling, substance-snorting, three-way-enjoying wild man in "Dallas Buyers Club," which opens today. So much so, that he is considered a lock for a Best Actor Oscar nomination for the first time in his over two-decade career.

Not that it was easy. He dropped close to 50 pounds to play Ron Woodroof, a Lone Star hell-raiser and rodeo cowboy who had enough smarts to work as an electrician. In 1985, he was diagnosed with AIDS, and became a self-taught expert on the treatments, smuggling in experimental drugs  from other countries, both for himself and later on for others. To circumvent legal issues involving the sale of unapproved medicine, he charged a fee for a club membership and handed out the drugs for free. He grew into a crusader for patients' rights in the process and lived for seven more years.

"Ron was an American original," McConaughey has said of his character. "He shook a tree. He made a noise. I said, 'I want to get this made, get Ron's story told.'"

The onetime reigning Romeo of romantic comedies ("The Wedding Planner," "How to Lose a Guy in 10 Days") and People magazine's Sexiest Man Alive in 2005 was attached to the much-delayed "Dallas Buyers Club" since 2009 and hung in there until financing was secured. Now the movie is proving to be a capper to a fantastic run of mostly praised lower-budget films that began with 2011's "The Lincoln Lawyer" and continued with "Killer Joe," "Bernie," "Magic Mike," "The Paperboy" and "Mud."

McConaughey, who turns 44 on November 4 and is wed to Brazilian model Camila Alves, the mother of his three children, spoke about his resurgence after attending the premiere of "Dallas Buyers Club" at September's Toronto International Film Festival.

You were born and raised in Texas. Did you know people like Ron and his pals who adopted this hardcore macho lifestyle?

You and Jared Leto (who plays Rayon, a transsexual HIV-positive patient who acts as Ron's go-between with the gay community) make for a memorable odd couple, one that has been compared to Joe Buck and Ratso Rizzo in "Midnight Cowboy." I love when you refer to Rayon as "Miss Man."

That came out on the day. One of the other things I threw in there, maybe it's Southern, is a little throwback to my dad. I'm talking with Jennifer Garner (as a doctor who supports Ron's efforts) in the restaurant and I go, "I've got a little change in my pocket and I'm a proud owner of a Texaco card." My Dad ran a Texaco station and my first credit card ever was a gas card. Didn't have a Mastercard, didn't have a Visa, didn't have an American Express, but you could get a gas card.

One weight question. You look like you are pretty much at your fighting weight again. How did you go about gaining it all back? You can't just pig out and stay healthy.

It's a little more dangerous than dropping it. Dropping it, there was a system. Four pounds a week and it goes straight down. Yeah, I'm hungry but this is what I'm doing. Coming back, the digestive has to get back in shape again. This is the most interesting part. The first time I ate a regular meal, my body immediately remembered, 'Oh, we live at 182.' So it wants to sprint back. And you just have to pull the reins and go ease off and eat more healthy. But the first time I ate a meal the size I used to eat at 182, it immediately remembered. I could feel it. My diet has changed. It's not like it is before. On purpose.

Did you make a deal with the devil, have a romantic-comedy intervention or what? How did this shift from mainstream commercial movies to smaller art-house films come about?

I've been asked this question many times and I've thought about it myself. Was there a hinge point anywhere? What I do know I did was I took about a year and a half, two years off. I was receiving scripts, there were some action scripts and there were some romantic comedies. Some I even liked. Some that came with beautiful pay checks. But I said, "Boy I feel like I can do that tomorrow." There was nothing wrong with them. But I was like, "You know what? I am at a point right now that I don't have to work. If I can just skip work, I can sit back." And I also had the added bonus that we had our first child. I thought I am going to be dad and just sit back in the shadows and see if I get inspired. I had a talk with my agent and said, "No more right now." That message took a while to get across because I kept receiving those scripts. And then I said, "No, I'm not going to do them."

When did you start getting other types of offers?

It went through saying no to things and then it kind of dried up. There was nothing. Then a funny thing happened. It was about two years after that William Friedkin (the director of "Killer Joe") calls, Stephen Soderbergh ("Magic Mike") calls, Lee Daniels ("The Paperboy") calls. I didn't chase any of those. In kind of a weird way that life works, by saying no to those things and sitting in a neutral position, it's like the target drew the arrow. What I was looking for swung back and showed up. And I was like yep, yep and yep. All of them came to me. Except "Dallas Buyers Club." "Dallas Buyers Club" was something I've had for years. I knew it was what I'd like to do. So, for whatever reason, I attracted those things and then went after them. What I found—this is something I notice now as I explain it—is I really kind of said I really want to have an experience. I am going to go for something where I say, "I'm excited about this, I am scared about it for the right reasons, it's intriguing, I can't forget about it, it's on my mind, it's got its teeth in me." I want the experience.

A lot of movie stars as they go along in their careers lose the ability to surprise an audience. Nothing wrong with Tom Cruise. He did try to do different types of movies like "Magnolia." But the action films he is doing now seem awfully familiar. You, on the other hand, have retained the ability to surprise audiences. It is so exciting to watch you now. We thought we had you pegged as the action hero or the romantic comedy guy but we were wrong.

I tell you this. A lot of these films I've been doing happen to be independent films. It wasn't a matter of me saying no to the studio films and yes to the independent. I am not prude either way on those. Here is one thing I've noticed that has been consistent. A lot of the roles have been anti-heroes. There are some anti-heroes from the "Dallas Buyers Club" to "Mud." These dreamers who aren't of this Earth. The anti-hero is something I would say is pretty consistent. And the movies are all pretty good. I can go have the same experience that I had with Dallas Buyers. I can go have the same experience with "Killer Joe." Whether you liked it or not, it had a real identity. "The Paperboy," like it or not, it had an identity. Movies kind of know what they are, like them or not. "Magic Mike" obviously works as a commercial success. "Mud"—my favorite movie. I think "Mud" is an American classic. I think "Mud" is beautiful.

There are risks with doing these types of movies. They sometimes have trouble attracting an audience even if they are good. Some people might be put off by the fact that "Dallas Buyers Club" is about a person dealing with AIDS. The movie managed to find some laughs in the situation. But you might not expect that after reading the plot description.

It's an independent movie about HIV. OK, it's going to be important. It's going to be good medicine, right? It doesn't even have to be entertaining and usually it won't be. But I think we made it an entertaining one, too. That is where you are doing it for under $5 million in 27 days. OK, I get it. We are going to get a character-driven tour de force role that I want to go do. But, man, the movie may just be nothing but medicine. And not entertaining. I've been getting experiences in good films that turned out to be arguably good films. Good films that had identities and worked. And that was no guarantee. 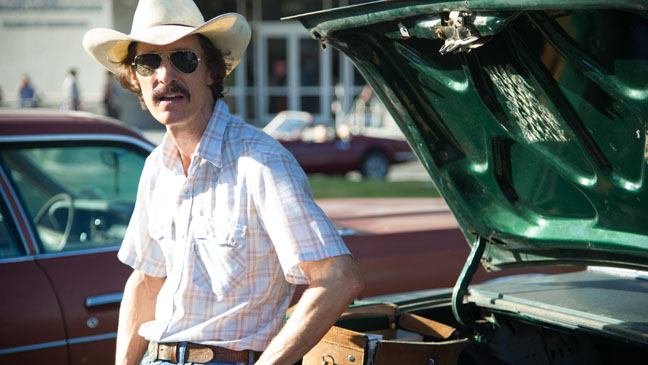 There are expectations that you will be Oscar-nominated for "Dallas Buyers Club." Is that something you have been striving for in your career?

It's not necessarily something on my bucket list. But if something like that were to happen, nominations or whatever, it would make me extremely happy and proud. I think that it's absolutely fair to judge art. I have opinions about things that are better than other things. If there was no gauge, you would say Shakespeare is the same thing as any junior-high girl's diary. I'm not really thinking about the result of it. But people are saying it to me. I don't know, we'll see. I like the film. I like the experience. I can talk about it for hours. And, if it translates in that way, great.

You have several other exciting projects coming out or in the works, including "The Wolf of Wall Street," directed by Martin Scorsese, in December. And a crime show on HBO called "True Detective" that starts in January. You co-star with Woody Harrelson. You two together should be something special.

I think so. It's eight episodes. Nick Pizzolatto's writing is outstanding. And Cary Fukunaga directed. He did "Sin Nombre."

And you are moving back into bigger movies, too, working with Christopher Nolan on "Interstellar," about space travelers. He is very secretive about his work. Can you say anything about it.

They're watching me. I can't say much about it but it is going well at this point and I'm enjoying it.

Where are they shooting it?

We just finished filming around Calgary.

That was the right location for this part of the film.

Why? Is there a stampede?

(He laughs) We came after the stampede.