“Joshy” is an intimate, star-studded comedy that functions like an indie blockbuster. It feels too big to be considered a regular indie, with a massive cast and its appetite for humor more equivalent to a studio project than any Sundance film. But it treats both of those two factors with a low-budget film's naturalism, relying on performances primarily over script or set pieces. It’s one of the most organic films you’ll see this year aside from Mike Birbiglia’s improv performer comedy “Don’t Think Twice,” and has a similar effect of capturing truth within dark comedy.

The set-up for writer/director Jeff Baena’s follow-up to “Life After Beth” may sound familiar—a life-changing reunion at a rented house—but the execution is not: Joshy’s (Thomas Middleditch) bachelor party rented the space long before he suffered heartbreak, and now it's become a guy's weekend. His friends (played by Alex Ross Perry, Nick Kroll and Adam Pally) want to make the most of it, but as more people become involved, the weekend gets more emotionally complicated, especially as some guests have to face the sadness they’ve avoided back home. Baena fills the movie from top-to-bottom with recognizable faces, including Jenny Slate, Aubrey Plaza, Brett Gelman, Paul Weitz, Jake Johnson, Kris & Joe Swanberg and more, creating a type of party atmosphere through filmmaking, albeit with on a devastating, secret occasion. (My review of the film from Sundance 2016 can be read here.)

RogerEbert.com spoke with Baena about the film, how he made a comedy with no script and a massive cast, the influence of former collaborator David O. Russell on his work and much more.

Tone is a huge factor for this story, especially with the darkness that is behind the comedy for most of the characters. What was your mentality to getting that right?

It’s about maintaining reality. I wanted the comedy to not be overbearing and still earned, and feel like we’re watching it as it’s happening.

How do you maintain that reality, or even that natural awkwardness, when working with a lot of actors? Were there a lot of takes, or was there improvisation?

We actually didn’t have a script on us, we worked off of an outline, like a 20-page outline. It had all the pieces and what people would say was written down, but the actual words themselves weren’t. So, everyone was providing their own dialogue, which I think made it so natural. Then there’s the other element that we were editing as we were shooting, to make sure that they weren’t going for the obvious jokes but were being vulnerable and honest and authentic. After doing “Life After Beth,” which I think had one line that wasn’t scripted, everything was scripted so that it sounds natural, and I went to such great lengths to create dialogue and to come across the way that people wouldn’t sound like they were on the nose. But with “Joshy” I wanted to try this as an experiment and see how that would feel, and see how that would work, to try to keep people in the moment. And to just make sure that everyone is following the same line.

The selection of your actors is important, especially for how many of them have to be both believably funny and sad here, not just hamming it up in their limited camera time. When you’re picking actors, are you auditioning them, or just casting them?

I never really audition, ever. I know most of these people personally. And when I was a kid, the reason I ended up doing movies was because I saw “8 1/2” and it changed my life. Fellini was really important to me. And I think it was in an interview where Fellini said that the reason he cast Marcello Mastroianni in “La Dolce Vita” is that he was at a restaurant, and saw the way that Marcello was eating. I think that resonates with me. I think there are a lot of actors who are excellent at cold reads, and they go to an audition and they read the part and nail it, but then when it comes to the performance they don’t have something. So I’d rather just go to lunch with them and hang out with these guys and just get their vibe. And instead of trying to jam them into a part, I try to build the part around them, and to make it more true. For me, nothing is sacred. You can adjust the script and adjust the points, just make sure that the person you have in there is the right person and works with the story.

Where did the idea come from to cast indie director Alex Ross Perry as one of the bachelor party guys? He’s a scene-stealer amongst a group of more experienced comedians.

Alex is a friend, we play Scrabble and stuff together. He’s able to not be super self-aware and be himself for the most part, and [his character] is a refined version of himself. It wasn’t an identical experience, but we had a similar experience to a friend of his and his fiancée, so he was able to draw on the experiences that were similar. And he’s so funny and so amazing.

What is your favorite part about writing and directing comedy?

I like collaborating with actors. I love finding that moment where it all comes together. Comedy is all about rhythm and context, and there’s all types of comedies and it’s about finding that right brand, that consistency in tone. For me it’s a challenge, especially in a movie that is improvised, to sort of generate that. But to put yourself in this position, you’re letting yourself out there and you’re open to all types of disasters. But I think it’s rewarding, when you do find that moment, the primacy and the intensity of it is so much brighter because it’s fresh. It’s not like you’ve rehearsed something hundreds of times and you’re trying to capture it. It’s taking place right in front of you, and I think as an artist that’s what everyone is aiming for, creating instead of replicating. 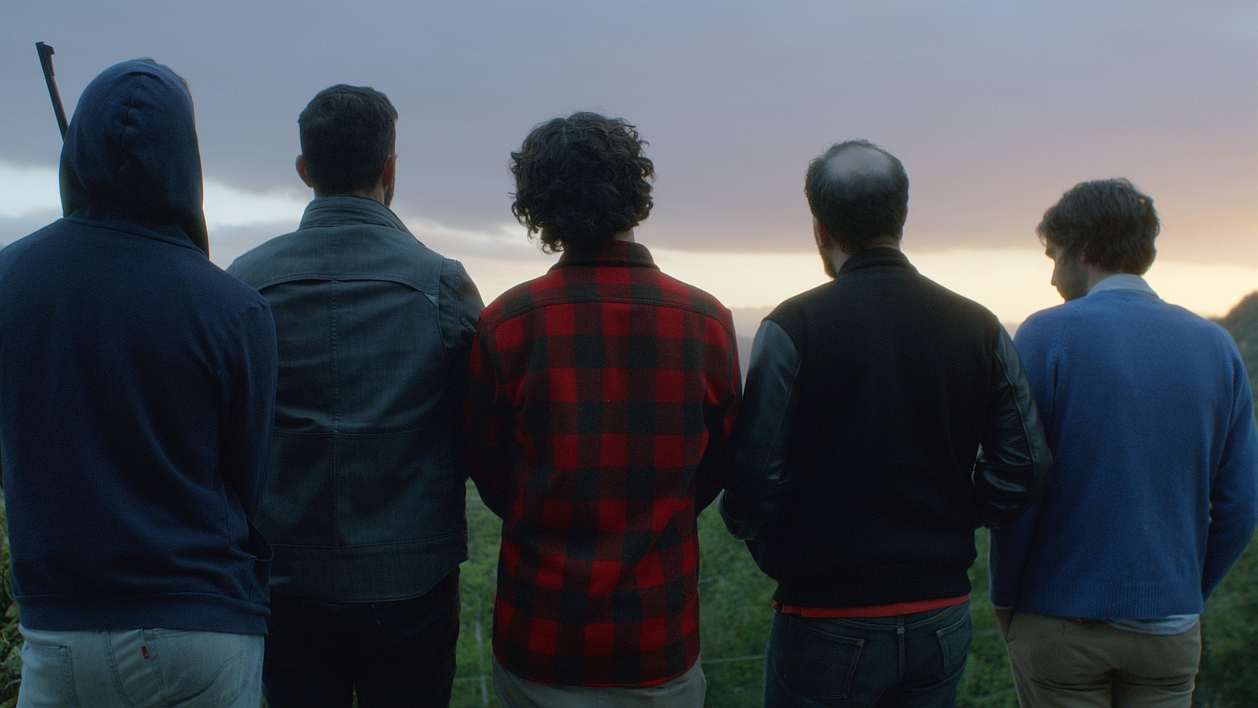 Speaking of that rhythm and context, “Joshy” seems also driven by a type of momentum. What kind of production schedule are you working with in the case of this film, especially with these actors and a lack of script?

We shot the whole thing in 15 days. And there was the Paul Reiser and Lisa Edelstein scene, and I think we shot that in an hour, hour and a half. Jake Johnson’s scene we shot in like 45 minutes. We were moving really fast, the budget was tiny. So we didn’t have a lot of time and a lot of chances to cover it as much as I’d like to, but we did the best that we can, as fast we could. We were also in Ojai, California, and kind of away from my comfort zone. Everything amplified your rush the whole time. That intensity, it provides not a lot of time to think of what a performance would be, it was just what it had to be.

Writer/directors Paul Weitz and Kris and Joe Swanberg make brief appearances in the film. How did they get involved?

They’re all my friends. Miguel Arteta is one of my closest friends, and I love “Chuck & Buck.” And I think Paul Weitz’s performance in “Chuck & Buck” is one of the most overlooked things ever. I’ve used him in every thing I’ve done so far. Joe Swanberg is a real friend of mine also. I had never really improvised, but Joe was really good at that too and as many people as I could get who had that experience performing in that world.

When you’re putting all of this together after such a tight production, does editing prove to be the most difficult part of making a movie like “Joshy”?

It’s not like editing is a walk in the park for a movie like this. But I think production is the hardest part and there’s no margin for error and everything has to be right otherwise you’re stuck. And since we had no time, and pretty much no money, it’s not like we had four times more footage than what you saw, a lot is what you saw. It’s not like we hit record and you saw a live version of the movie. My editor Ryan Brown is amazing, and we’re on the same page, but he didn’t have a ton of footage. So I’d say the production part, where you’re under the gun and have no time and am trying to figure it out ... we were blocking while we were shooting, it’s not like we had big lighting schemes. Everything was improvised, basically. It was super exciting, but it was also stressful.

This sounds like it could have been pretty freeing, too. Was it a reboot of the creative juices for you?

Absolutely. For “Life After Beth,” because of the way I had written it, it was almost like I kept orchestrating something. It was just a lot of choreography. And “Joshy” was about finding that moment, and hanging onto it. It was as different an experience coming off the first one. I don’t want to fall into any traps of replicating the thing over and over again, but I’m interested in finding a new way to make it exciting.

What influence did co-writing with David O. Russell on “I Heart Huckabees” have on how you want to work with actors?

I wrote three or four scripts with him, I was really young like 24 … the one thing he does that’s really amazing is that he’s able to bring groups of people together. He creates an environment for them to have a voice, and it’s about how those voices don’t get drowned out or diluted in large groups. That’s something I’ve always been drawn to, I love ensembles and I love confabulations and I love large groups and chaos, and so I think probably the biggest thing I’ve taken from him is how to deal with that. Even watching “Joshy” and the movie I just did (“The Little Hours”) there are a lot of scenes where there a lot of people who are all coming together, with various interests, and not any kind of rules, and they’re all involved. And the goal is not to make completely throwaway random lines on top of each other, but there are things you’re tracking and lining up. There doesn’t have to be a harmony, but there can't be too much discord where you’re distracting from things.