In a season stuffed with high-profile Oscar bait, a downbeat fact-based drama like Michael Cuesta’s “Kill the Messenger” seems destined to get lost in the shuffle. Let’s hope it doesn’t. Not only does the film contain Jeremy Renner’s best performance since his Oscar-nominated turn in “The Hurt Locker,” but it also unearths a vital tale of heroic journalism that remained criminally buried for years. Renner stars as Gary Webb, a muckraking journalist-turned-whistleblower who reports on the CIA’s shocking role in arming the Nicaraguan Contra rebel army and importing cocaine into California, only to have his work discredited by a ruthless CIA-backed smear campaign.

Cuesta spoke with RogerEbert.com about how the film inspired him to become his own journalist, his seasoned approach to working with young actors and the disturbing revelations that he was told to leave on the cutting room floor.

You’ve said that this is an optimistic film, despite the downfall of your hero.

I’d like to think that if the film can communicate anything, it empowers journalists with the knowledge that they can make a difference, and to just keep going. We need guys like this, or guys like your cousin [Jeremy Scahill, writer/producer of “Dirty Wars”], who go out and expose corruption. Once there’s no watchdogs, none of the bad guys will ever be called out. To me, it’s that simple. In the end, despite his discrediting, Gary did get the IG [Inspector General] to release these reports. The tragedy is that it was buried beneath the Monica Lewinsky scandal and stuff like that. But there’s a couple other things I could talk about that happened as a result that are not in the film which are pretty shocking and that I think your cousin would totally love. Things that came out as a result of his digging. 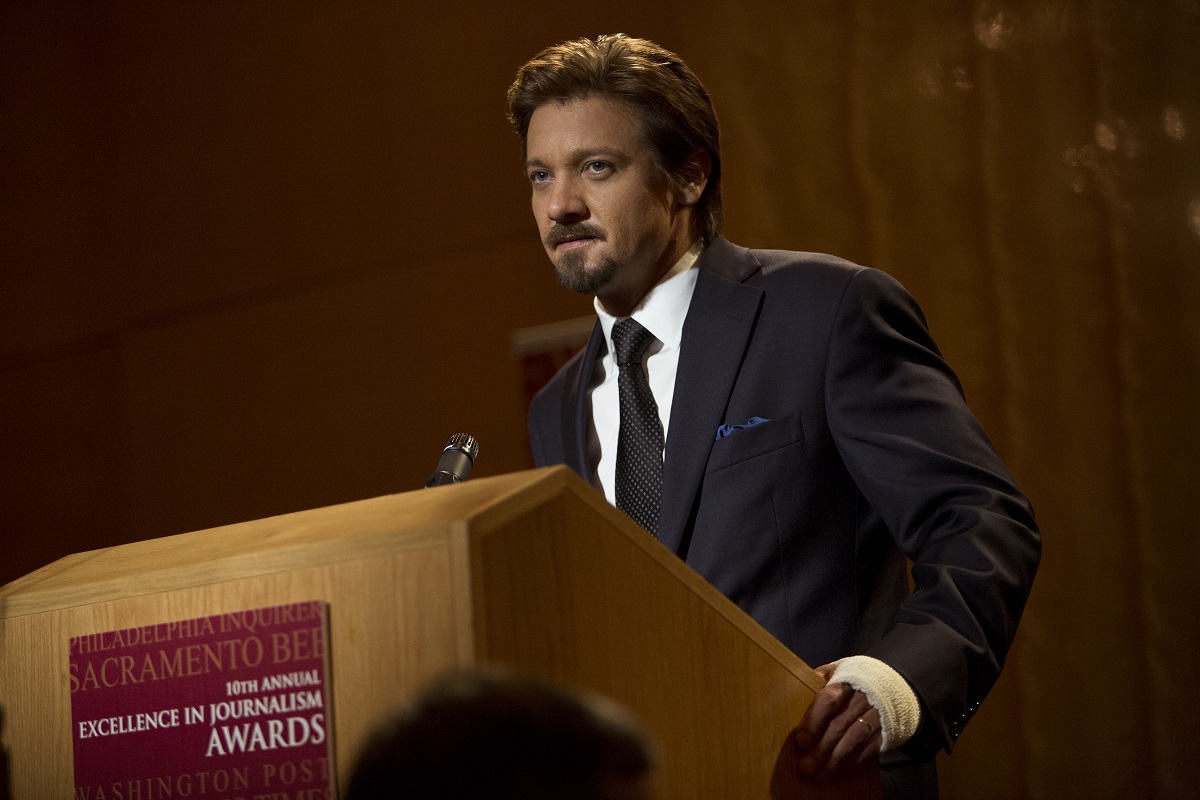 When the second IG report was released, [CIA Inspector General] Frederick Hitz went in front of the Senate Investigative Committee and admitted to an executive order that was signed into law in the early ’80s by Reagan. It was an executive order allowing the CIA not to report to the Department of Justice about their relationships with Nicaraguan drug dealers during the Contra war. What more proof do you need? I didn’t know this until I was literally cutting the movie. I was focusing so much on the making of the movie, but when I got into post, I became somewhat of a journalist.

I was an art student and a photographer, and I actually wanted to be a photojournalist when I was young. I had never made a documentary before, and then all of a sudden, while making this film, I started to investigate the issues explored in the script. My assistant came up to me and asked, “Did you see this? It’s on the CIA website.” He had found a letter between [Director of Central Intelligence] William Casey and the Attorney General. And then I dug into things that Gary had said and found a speech he gave at one of the main schools of journalism, and he had the report with him. It’s amazing the s—t you find when you do this research. But no one knows about this. I actually wanted to put that into the film, but the studio, for some reason, was fighting me, beating me down on it, and then I kept it simple. I guess it gives us something to talk about.

The film also inspires viewers to investigate the issues themselves.

Yeah, if anything, the movie does shed a light on the fact that this s—t happens and that there’s more of it. To carry a guy like Webb’s torch is to keep digging. By the way, that town hall meeting which I showed some clips from during the coda of the film, is pretty amazing. You can find it online. Imagine a CIA director going into the African-American community to take questions. That would never happen now. It’s ninety minutes long, and boy do they beat him up. You see how nervous he gets, especially when they bring up the Tuskegee [syphilis experiments]. He’s like, “Okay, we admitted to the horrors of Tuskegee, and now, it’s so many years ago, but this is something that I will investigate.” How can we trust you to investigate yourselves when you had Tuskegee and you buried that for so many years? 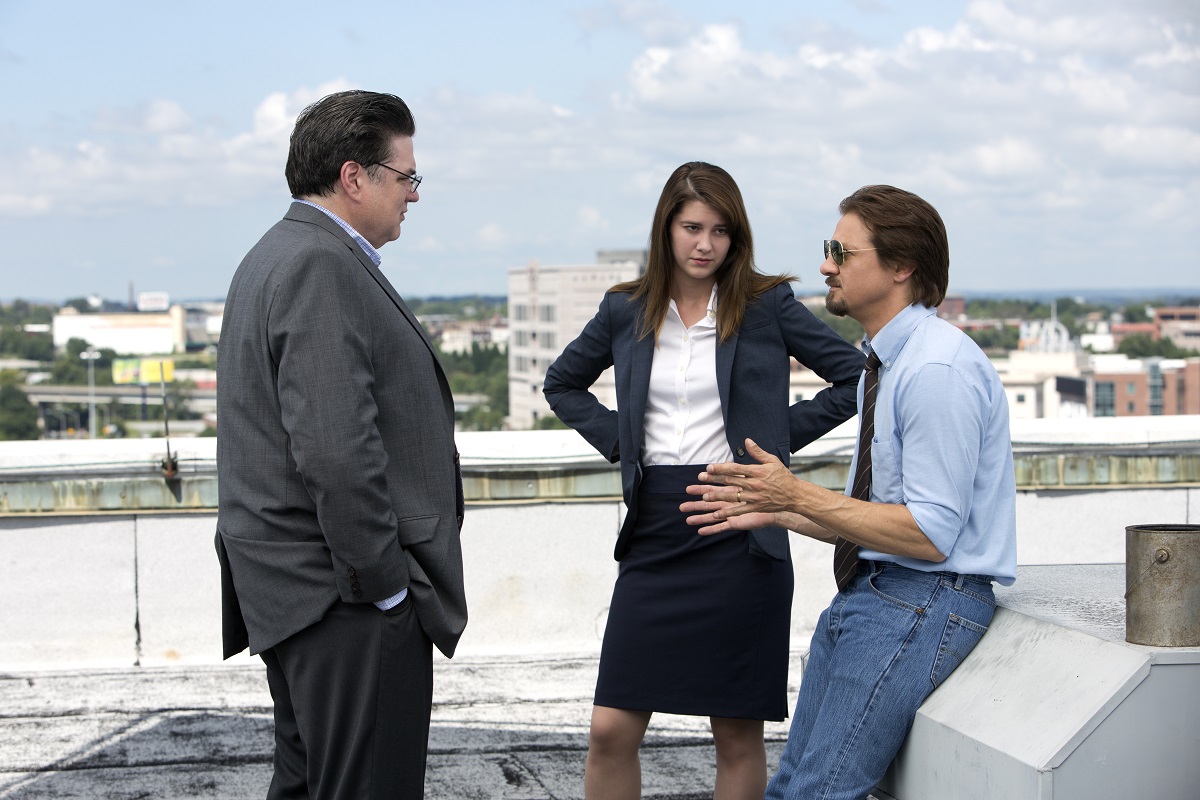 Your work here reminded me of your pilot for the first season of “Homeland.” In both cases, you demonstrate a gift for building a palpable atmosphere of paranoia and filtering it through character perspective. Tell me about your collaboration here with cinematographer Sean Bobbitt.

Can you believe that he wasn’t nominated for “12 Years a Slave”?

An appalling snub, to say the least.

I was watching parts of that film a couple weeks ago, and one of the reasons it didn’t get nominated is because it’s very simple—it’s deceptively simple, and usually the things that get nominated are the things that are showier visually. If it’s a costume drama or a period piece like “Days of Heaven,” and there are great sunsets, you go, “Ooo!” If anything, “12 Years a Slave” was so stunning and so simple, but that’s Steve [McQueen, the director] too. I have to say Sean would pull me back every once in a while, because I would get a little too complicated with things, and he would go, “No, no, it’s better that we just focus on this, don’t you think?” and I’d go, “You’re right.” We would prep every morning. We would spend three hours going through the script and talking about each scene—the meaning of it, the point of view—we were mostly coming from Gary’s, obviously, and wanted to keep it on his shoulders.

We did have a basic filmic approach to the movie. I broke it down in three parts for him and he brought stuff to it as well. It starts as a procedural: guy on the beat, the respite, the story is discovered and then you have the moment where he writes the story, which is this cathartic “F—k you, I’m gonna get you, I’m the cop on the beat” section. That’s why I brought in the “Clash” song, and I shot it in a way that was very loose. I told Sean to just capture it and I’d piece it together. It should almost look like stock photography. And then you have a moment of rest and a little self-doubt before the machine starts. Then you have this “f—king turning point,” which is ten minutes long and takes us all the way to the moment where the articles discrediting him are on his desk. Then the movie goes into isolation. We kept calling it, “Gary starts to separate from people.” The camera becomes more staid and we start to capture the spaces in a much more claustrophobic and alienating way. The camera wasn’t moving as much anymore in the third act of the film. Much of the movie is like “All the President’s Men” and the third act is like “The Parallax View,” so in both cases we’re referencing [director Alan J.] Pakula. 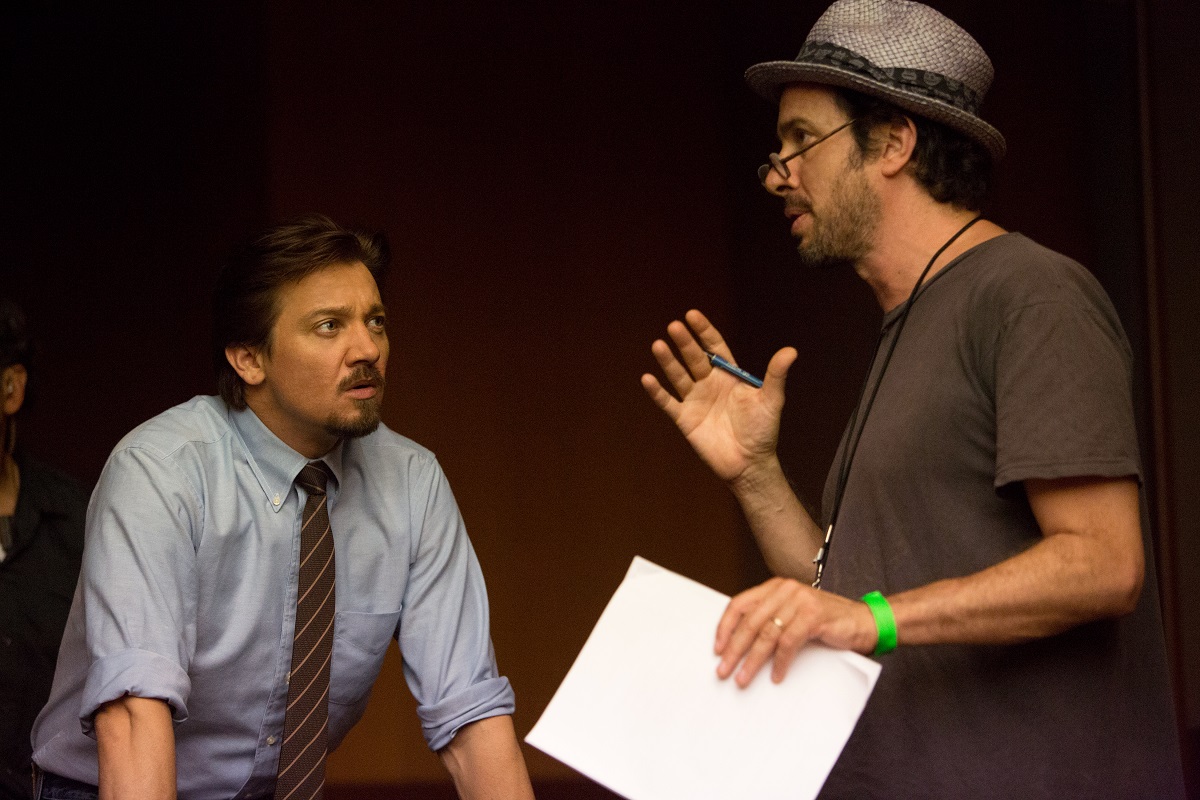 He’s trapped, it’s like a purgatory. I’m not the sort of person who wants to say what any given image means. Let the image say different things for different people. Someone mentioned last night [at the post-screening Q&A] the idea of Gary becoming someone else, which is what the [smear campaign] does to him. The fantasy becomes the reality. I wasn’t intentionally doing that but the third act sort of has that feeling. I was just trying to capture that feeling of Gary losing ground, particualrly during the motel sequence and, of course, the Ray Liotta scene is almost surreal. It was intentional to make his character almost seem like a ghost.

The scene that has continued to haunt me takes place in a parking garage where Gary suspects that he’s being followed by a man that remains out-of-focus. It’s quietly terrifying.

The scene was written differently. In the script, we had guys in a car watching him. Our screenwriter, Peter [Landesman], adapted [Nick Schou’s book] “Kill the Messenger” and [Gary Webb’s] “Dark Alliance” years ago and the script went through some changes. Once I got involved, I started bringing things in. You’d be surprised how when you make a movie, you fix things in the last minute and it makes a huge difference. That scene was described as, “Two guys are watching him,” and I’m like, “Too obvious.” Thank you for saying that thing about paranoia, because that’s exactly what I wanted here. I wanted to make it subjective and ambiguous. The scene was more about Gary starting to feel a sense of doubt and he continues to feel that doubt all the way through. If you notice when he’s at the lake house with his family, he’s isolated and he’s by the fire. People are like, “What is the scene about?” and I’m like, “It’s about him being alone. He’s starting to be aware of his fate.” 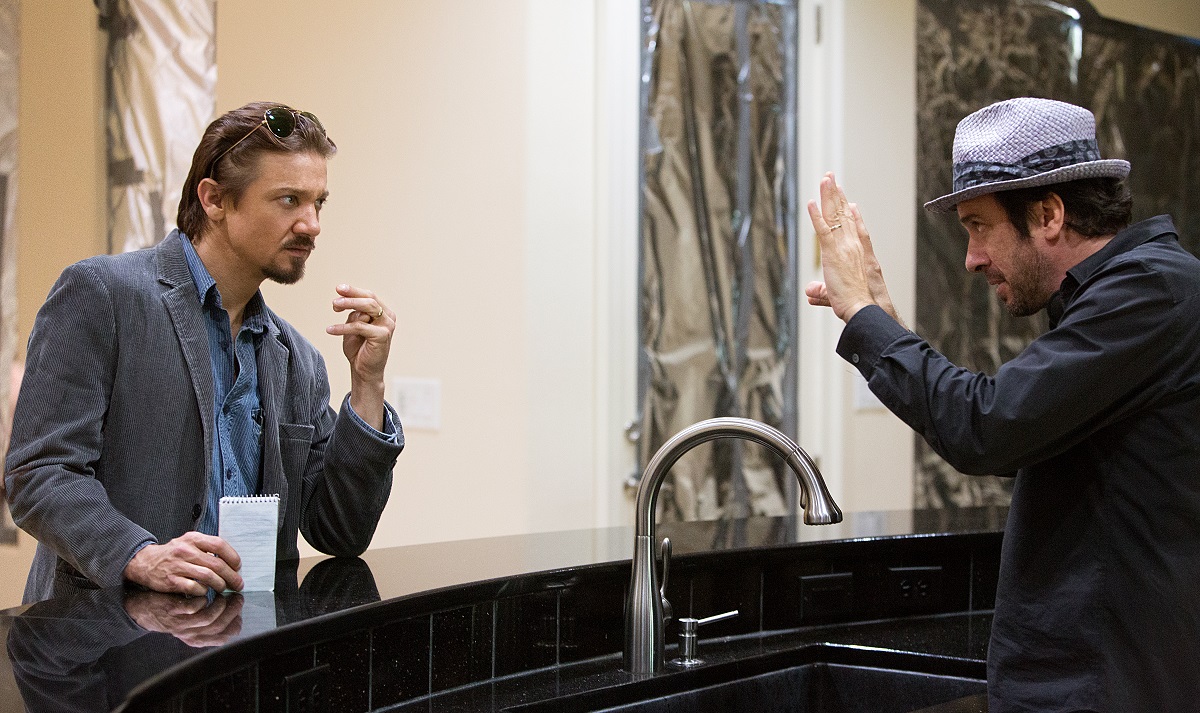 Remember that scene where he’s out in the boat and his family is calling him? These are things I just came up with on the fly. I told Jeremy to get in the boat, and he’s like, “Why?” I’m like, “Because you’re separating from them.” Now this scene has a purpose. It was written in the script like, “They take a vacation,” so I gave it something. Those are the filmic, subtle things that I like. For the scene where Gary is followed, I remembered that a month ago, I was in a bad area. I went to my car at 2 in the morning and a guy followed me all the way. Then he sort of broke off and went to another car. That’s the feeling: “Is it or is it not?” It doesn’t matter. It’s about Gary just thinking about it. This is what it’s going to be like. Plus a guy just told him, “Some stories are just too true to tell.”

You’ve also sported a great talent for directing young actors, from Paul Dano in “L.I.E.” to the young ensemble of “12 and Holding” to Lucas Hedges (“Moonrise Kingdom”), so effective here as Gary’s son, especially when he tells his dad, “I’m disappointed in you.”

Usually they haven’t done much work. That was true of Paul in “L.I.E.” and Lucas, who was only 16 when we shot this. Whatever they do [initially] is their best thing. They’re bringing their raw, most honest thing, and you capture that. We shot seven takes of that scene, and we ended up using the first take. He really went there, and after that, it fell apart. And I figured that I knew I had it, but he kept on wanting to do it, and I’m like, “Alright, try it.” I kept trying to push him emotionally, but he couldn’t get there. Most trained actors can. They can give you a range, but the kids are really raw. They’re not unlearned, but they’re still virgins to it. Their work is honest and pure. With people like Paul Dano, it was always the first or second take. After that, they would start “acting.”

It’s ultimately about being natural. Don’t act, just say the words, and then your instincts will take over. To get the most honest performance, you can’t think. You have to know that dialogue until it becomes rote. Then you can forget trying to remember the words and they become your own. But I think that it’s really just about the rawness and letting the actors be who they are. Don’t give them technique. I would never say, “Okay, just really try to cry.” Truffaut always said, “Cast the most intelligent kids.” Paul and Lucas are highly intelligent kids.