Interview: Brenton Thwaites and Odeya Rush on "The Giver"

Brenton Thwaites and Odeya Rush are relatively fresh faces in Hollywood. He’s from Australia, she’s from Israel. Mainstream moviegoers will recall seeing Thwaites as Prince Philip in “Maleficent,” while family audiences may remember how Rush lit up the screen in “The Odd Life of Timothy Green.” In Phillip Noyce’s adaptation of Lois Lowry’s beloved 1993 novel, Thwaites plays 16-year-old Jonas, a boy whose unusual mixture of abilities cause him to be selected as the receiver of memories granted to him by a wise old man known as The Giver (Jeff Bridges). These visions detail the past of his deceptively utopian community before it conformed to a sterile “sameness,” which is portrayed in black-and-white a la “Pleasantville.” Once Jonas’s eyes are awakened to the hypocrisy of the only world he’s ever known, he decides to lead a revolt with the help of his crush, Fiona (played by Rush), while enraging the formidable Chief Elder (played by newcomer Meryl Streep).

RogerEbert.com chatted with the two young stars about production challenges, the relevance of Lowry’s message and their candid thoughts regarding a potential sequel.

What is it like to be navigating the Hollywood industry at your age, having come from different parts of the world?

BRENTON THWAITES: There are less films being made and there’s less work in Australia. When actors get a job there, they really try and commit to it. That’s not to say they don’t commit to it in America or that it’s not hard to get work. I’m sure it is. I guess my break in America came a little too early. It would’ve been nice to have a few more years to find out what I’m like as an actor without a camera on my face.

ODEYA RUSH: I didn’t act [on film] in Israel, but I wrote plays at home and acted in plays at school. I tried to get an agent when I was 12, but they told me that I had too much of an accent. I’ve been said “no” to so many times that every time I get a chance to work in a movie, especially one like this, I’m grateful. This happened six months after I came to LA. I had been auditioning for so many pilots and so many of them weren’t good. [laughs] I didn’t even get callbacks for some of them. It was hard, but now my career is beginning to pick up speed and I’m getting to work with these amazing people. I’m really thankful for it. Ever since I was younger, I would make table reads at home where I would give fake interviews. [laughs] I’m just thankful that it all happened so fast. So many people from Israel are telling me, “You’re living my dream! You’re so lucky that you get to do this.” I am very lucky that I came to America for my dad’s work, and I am lucky that I started when I was 13. I’m really fortunate to be in this movie too.

Many people don’t realize that some of the best shows on American TV, such as “Homeland” and “In Treatment,” are based on Israeli programs.

OR: There’s so much good writing coming from Israel. If only we had bigger budgets. There was just a movie that screened at Tribeca [called “Zero Motivation”] about two girl soldiers in the army. I want to see that. I’ve heard that it’s funny. A lot of movies that come from Israel are about war, but there is such good, funny, rounded writing that comes from the country that I wish more people would discover.

Were there certain performances that you watched when you were younger that made you want to take on this profession?

OR: Natalie Portman in “The Professional.” I saw that movie when I was 11, and it was kind of the first time where I saw a kid acting in a serious movie, not in some Disney Channel show. It inspired me to write more serious things like that. She was someone who could carry a whole movie at age 11 and it really pushed me to believe that I could do this and that it is a possibility. Growing up in Israel or Alabama, that possibility seems so far away. So seeing someone so young in such a heavy, serious movie inspired me.

BT: I thought Leonardo DiCaprio was amazing in Baz Luhrmann’s “Romeo and Juliet.” Hugo Weaving in “The Interview” was also great. Hugh Jackman really inspired me as a kid. He’s a cool Aussie guy who works very hard and he’s a fantastic actor. Obviously, he keeps really fit. He seems like he’s happy acting. Who knows if he really is, but he gives you that impression. [laughs] 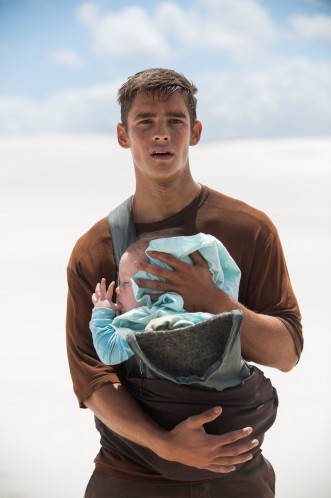 How did you interpret your characters’ evolution throughout the film?

OR: With Phil, we would do so many versions of a scene. In the end, it was decided that at the beginning of the movie, we’re very naive and happy and content and don’t really know any better. As the movie moves along, my character is in a state of confusion because she doesn’t know what feelings are. I’m not like The Giver and Jonas because I’m not receiving memories. When I start feeling things, I don’t understand what they mean at first. Then my feelings turn into anger once I learn about the cruelty of this community. There was never a moment where we were completely deadpan or robotic.

BT: We’re not emotionally numb, we’re very accessible. We’re just misinformed. The film does give a sense of happiness and comfort and pleasure, great things to have in community, however... [pause] It’s nice to see that it’s not a community of blankness that causes the audience to think, “Oh, you wouldn’t want to be there.” The idea is to want to be there and to be happy with a family that you love.

I was reminded of “Eternal Sunshine of the Spotless Mind” in how it shows that once people erase traumatic memories, they end up erasing the good ones too as well as any personal growth that occurred because of them. How do you relate to the overarching message of the film?

OR: Wars are happening all over the world right now and have been happening for so long. That idea of taking war away would give peace to some people. Maybe they prefer nothing at all as opposed to having these terrible experiences. It also makes me think of communism and that whole idea of people who are poor, want jobs and don’t want to be ruled by the king anymore. They wanted what they thought would be happiness. At some point they were brainwashed into thinking they were happy. It is still going on in the world. I’m referring more to Lenin because my grandmother lived in Ukraine during that time and my mom came to Israel to get away from that.

According to your Comic-Con panel, it sounded like production on “The Giver” was fast-paced. Was it a challenging shoot?

OR: There’s no stopping with Phil. He lives, eats and breathes “The Giver.” That’s all his mind is occupied with. He can go nonstop and I think it’s so good because he picks up on so many things and you want your director to be that involved and that loving and that passionate about the project. It was really good for us to stay in the zone of thinking about each scene and where it’s meant to go, even when we’re getting our hair and makeup done in the morning. After doing so many takes, Phil takes you to a completely different place that you never thought the scene would go, but that’s part of his brilliance. 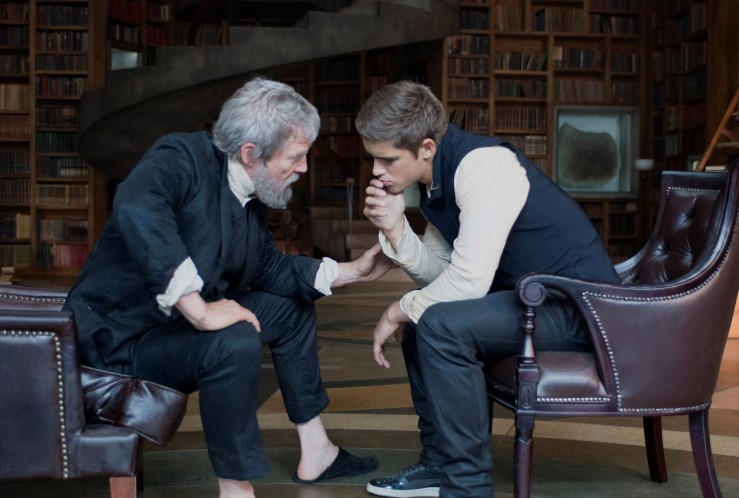 BT: It’s hard working with Phil. It’s so tiring, emotionally and physically, because everything is so intense. I was on every single day, all day. It was the gnarliest thing I’ve ever done in my life. Halfway through, I told Phil, “I have nothing left.” He pushes you and pushes you and pushes you and at the time, you want to kill him. But now when I look back, I realize that the performances that he got out of me at the time were worth it. I understand better what he was doing. He’s so passionate and he’s the guy that we all try and match. We try and let him inspire us every day. But it was a wicked one.

You’ve mentioned in interviews that the first scenes you shot were the one-on-one encounters with Jeff Bridges.

BT: It was a great place to start. I think we started with the scene where I come and meet him. I was nervous and there were real emotions coming up for me. I was just kind of playing the moment because, in reality, I was as nervous to work with Jeff as Jonas was to meet The Giver. It was a good way to rehearse with Phil. We jammed with one another and got the feel of it.

Lois Lowry has teased that the story might lead to a franchise, with subsequent books and films. What would motivate you to become involved in a sequel?

OR: Our contracts. [laughs]

Could you see the story continuing?

BT: Only if [this film] makes a lot of money and the producers get greedy. I think the story is great on its own.

OR: I’m scared of continuing the story. I don’t want to hurt it.

BT: There are so many things that could happen and Lois has ideas, but I think it’s such a great, rounded story. The finding of the world is interesting. I wouldn’t rule out that there could be a great second and third, but…

OR: Maybe if Jeff and Lois and Phil were involved again...

BT: I couldn’t survive a second one, bro. [laughs] I’ll still be tired from this shoot when I’m 50.