Nicholas Hoult is having a ridiculous 2015. At 25 years old, he feels like an actor on the verge of a major breakthrough. Not only did he appear in what is still arguably the best film of the year (“Mad Max: Fury Road”), but he has two films premiering at the Toronto International Film Festival—“Kill Your Friends” and “Equals,” co-starring Kristen Stewart. “Kill Your Friends” is based on the darkly comedic novel by John Niven and features a Hoult you haven’t really seen before. He’s an A&R man in the ‘90s in England—think Blur, Oasis, and all their imitators. It’s a cutthroat world, in which people will do literally anything, including inflicting great bodily harm, to get ahead. Co-starring James Corden, Rosanna Arquette, Craig Roberts, and Tom Riley, “Kill Your Friends” is kind of like “24 Hour Party People” meets “American Psycho,” and Hoult is fantastic throughout, keeping us engaged with a sociopath. He sat down with us during a busy TIFF to talk about both of his films, Nux, and his idols.

Did you know “Fury Road” would be as amazing as it was? Did you suspect?

It’s difficult to say. You have great experiences on films with good people, and sometimes the film doesn’t live up to what you expected. But that one certainly, seeing what Tom and Charlize were doing, and the amount of prep and the work behind each story and the character and the props, and aesthetically what everything looked like. I knew that George Miller was a genius. It was a great recipe.

But the most highly acclaimed film of the year?

No, you can never really have an expectation of that. My idea is to enjoy the film process and learn, and if the film doesn’t turn out exactly how you expect it, or doesn’t get critically whatever, then you don’t feel like, “Oh, that was a wasted thing.” Some of them don’t get reviewed very well when they first come out, but then twenty years later people love ‘em. It’s more about taking something from the experience as a whole.

What’s the learning experience for “Kill Your Friends”?

Normally, I’m quite relaxed about dialogue and all those sorts of things, and normally you have freedom with character to go find this it as you go. But this character was very much about being precise with his words, and knowing where he started a sentence and where he was going to finish, and what the cherry on top was going to be. There was no time for me to not be on. It’s just a different character to work with. And I always look at a film when it’s finished and think, “Oh, I could have done that scene a differently, or I should have done that.” Even when I get home, it’s like you’re falling asleep and BAM! “That was the thing I should have tried, that was the thing I should have tried.”

This was the chance for you to spread your wings a little bit more, try something different. Is that something you seek out?

Yeah, completely. Between "Mad Max," this, and "Equals" I’m just trying to do different stuff. And challenges as well, that’s how you push yourself to not be scared of taking on something that isn’t necessarily a sure thing.

Was there fear in this one in playing an unlikable character? This film could have made you look like a jerk, or an asshole.

But I’ve also played nice characters. And normally the jerks and the bad guys are more interesting. Unfortunately, they’re more fascinating to watch. But I wasn’t worried about being unlikable. There’s always that thing, to get into a character I like, and this is kudos to Jon and Owen more, at times trying to condone the behavior and figure out where it comes from. What happened? What is he a product of? It’s more a commentary on that world and the pressure that the people are in, than anything specifically about the character. Obviously there are things that are off about his nature, but also I think one of the more bold things about the book and the film is that he doesn’t really get a comeuppance. Most of the time with a character like that, you’ll see a thing like, “Ah, and here’s the humanity, here’s the moral of our tale.” That’s not the case in this.

And no explanation in this.

Which I actually appreciate, in a way. It’s like, “Yeah, okay, this is what it is. It’s twisted, and fun, and tapping into the dark side of a person’s personality.” 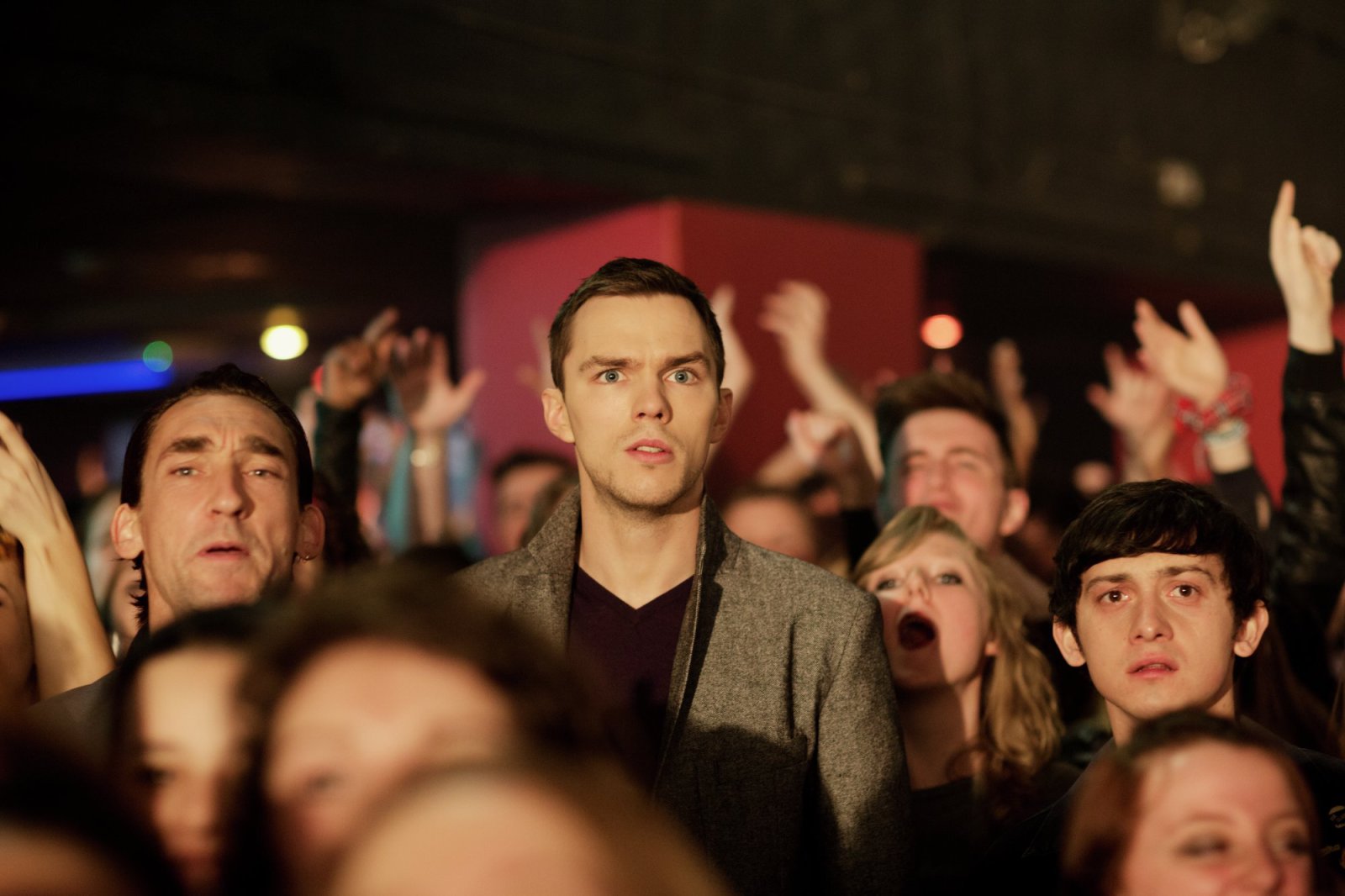 Did you do any backstory, just for yourself? Was this the first murder he committed, or do you not bother with that? Do you just do what’s on the page?

Owen and I spoke about that, and the things that he loathed like the general public. He probably had quite humble beginnings in life, and had to be a success, because in the end he’s got nothing. And that’s the key thing about some of the other characters. They come from money families, and if it doesn’t work out for them, it will be like, “Hey, my dad will give me a job somewhere else.” My guy is like, he must make it work. This is his only option, he’s desperate in a way. And this is what pushes him to go farther than other people, so that was a key part.

Did you worry about going too far, and making them grotesque, repulsive or did you trust your writer/directors?

I think Owen was very conscious of not making it too much a “Lads’ Film.” When you’ve got a group of guys, and they’ve got misogynistic views from my character, it would be easy to suddenly make it a “Lads” kind of film. And that’s where I think treading a fine line of keeping it elegant and smart and slightly restrained and withdrawn in certain moments so it doesn’t run away from itself and become …

It could’ve gotten really dark, but it balances the tone.

I haven’t seen it with an audience yet. They screened it in Berlin, and I wasn’t able to go. And John peeked it just before the line, “This record is the biggest insult to humanity since a roomful of Nazis first cooed over the blueprints for Auschwitz.” And apparently there was a stunned pause in the cinema…and [then] everyone was laughing. So if that goes down well …

Did you do any research into the music scene of the 90s? I love all the music choices, Blur, Oasis. You weren’t quite old enough to experience that, right?

The period details are great.

The book is actually very useful for that sort of thing. I remember brief things from that time period, but it’s also that feeling of cool Britannia and Tony Blair, and everyone being like “yeah, here we go.” It’s that feeling we wanted to capture as well. 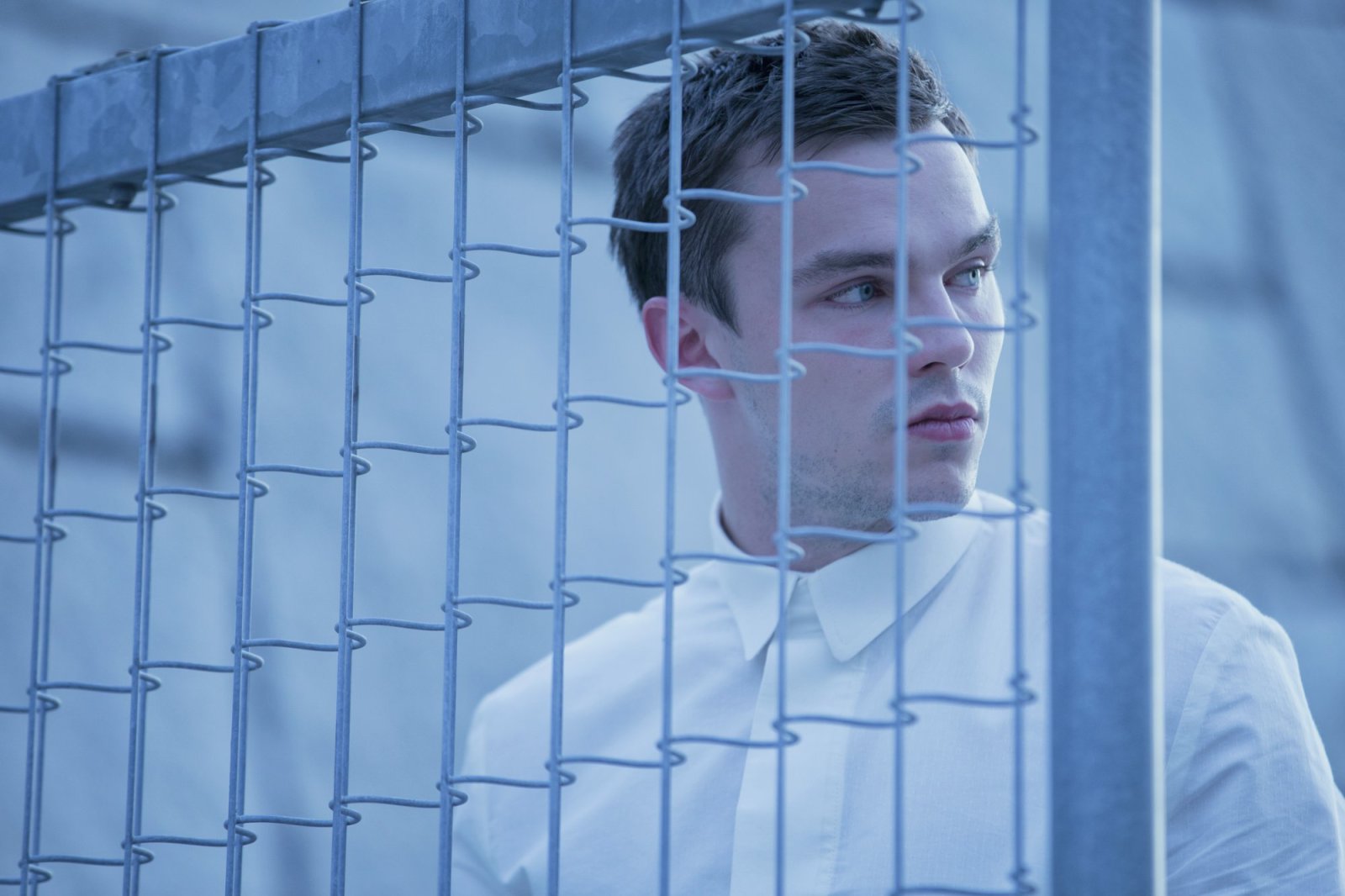 You’re having quite a fest. You’ve got this and you’ve got “Equals.” Is a festival fun for you? Do you get to have a good time? Or is it more like work?

Do you get to see other films and meet people?

I don’t think I’ll get to see many other films because I’m doing press both days. But you do run into a lot of people. And plus it’s just a smaller environment to be like, “Hey, here’s something we made,” and it just seems a lot more personal. It’s cool, and I’m very proud to have this and “Equals” here, two very different movies.

You said you’re picking things that challenge you. Do you plan things out in your career trajectory? This is where you want to be in five, ten, fifteen years?

I don’t think you can really say, “Oh, I want to be doing that,” because you don’t know what role is going to come along, or what is going to happen. You really don’t know. It’s more about getting better, working with good people, and learning. And also, I look at the actors I look up to like Fassbender, Hardy, McAvoy, and I’m like “OK,” and I look at the work of theirs that I love the most, and most of those came in their early-to-mid 30s, some of the time. So I’m like, “Okay, take your time, chill, do your thing, learn, get better, and then hopefully when you’re around the age they started being inspiring to you, you’ll start be able to give performances like that.”

The actors you look up to. Anyone else that comes to mind? You look at them and say, “They did it right. They did the right choices.” Anyone else?

I mean obviously some of the Paul Newmans, and I love Steve McQueen movies. Everyone says Gary Oldman. But I want to do different stuff as well, to do comedies, mess about, and see how it goes.

I love your variety of genres and I think that’s what makes you so interesting. And I’m old enough to remember “About a Boy.” Do you remember your “I want to act” moment?

It was something that I did as a hobby basically, and enjoyed. But I never went to work one day and said, “I’m going to be an actor.”

What’s the first thing that comes to mind when it comes to a movie that affected you as a kid?

“The Mask.” Robin Williams and Jim Carrey made my childhood. I loved “The Mask” when I was a kid.

What’s next? What are you working on?

I just finished the newest “X-Men.”

Can you tell us a little about that? Or are you on lockdown?

Kind of a planet’s apocalypse, a very big epic. But what I enjoy about the X-Men scripts is that other superheroes are like, “Hey, we’re awesome look at us.” But the X-Men are grounded in a nice human way. And they do a great job of bringing that to the characters, so that is always a nice treat. I’m going to be playing J.D. Salinger.

That’s Danny Strong who will direct, right? How is that going to be? And is there fear in taking on such an icon?

It would be stupid not be fearful and nervous about those kinds of things, but that’s what you thrive on a little bit. There’s no point in ... I could sit here and be like, “I’m going to take on this easy blah blah blah,” but that’s not how you get better. And there’s roles like this that people feel passionate about so you just do your best. The script’s brilliant. His life’s fascinating, there are so many elements to his personality I am intrigued by, and I see certain similarities between us, but also we’re very different in many ways obviously. I also just find the brain of the writer, whether lost in a script or a book, I love that they get lost in their world and are a big part of it, and that’s something I really can’t do, but am intrigued by.

It’s a common theme in films. We go back to biopics.

To see someone create, and how they get a voice in all of those things, is incredible.