The Sundance Film Festival raises the curtain on the film world every year. While January in theaters is chock full of uninspired studio product and Oscar hopefuls most critics saw back in December, the festival inspires expectation and optimism. Not every film will see the light of day off the mountain of Park City. Some will peek their head out. A chosen few may go on to be genuine classics. I have had the privilege of attending Sundance since 2003 and as I head out for my 13th year, now is as good a time as any to look back on what happy (and unhappy) memories can help inform my choices this go round and maybe even offer a tip or two on those making their first journey into the heart of independent cinema.

"The Very First Film I Saw At Sundance"

January, 2003. At a time when the Yarrow Hotel boasted two sets of screening areas. My first was in the smaller one which may have barely held 100 seats. I was still unfamiliar with David Gordon Green's "George Washington" but I was sure to seek it out after christening my Sundance experience with "All the Real Girls." The opening scene alone was a beautiful combination of dialogue and photography and though Zooey Deschanel was already making waves as a quirky supporting player, there was a sensitivity to her work here that made the eventual heartbreak of the film all the more painful. The film also featured Shea Whigham (as Zooey's brother) in one of his first major roles, who went on to play Steve Buscemi's brother on "Boardwalk Empire." It was also the debut of Danny McBride. As Bust-Ass. If ever a comic actor put his stamp on a career with his first character's name, it was certainly him.

"In the Midnight Hour When Love Began To Shine"

The year was 2004. It was the second of back-to-back midnight screenings after a crazy twist-filled concoction called "Haute Tension" that made little-to-no-sense. By the end of James Wan's and Leigh Whannell's "Saw", I was among those in the audience erupting with shock and awe. They took us on a grisly, bloody ride and we came out the other end somehow knowing we had all witnessed a classic in the making. None of us likely figured in an annual sequel for the next six years, nor that Wan would be helming the seventh installment of this ridiculous “Fast & Furious” series a decade later, but there was an undeniable energy in Wan's work which suggested this was a career that would eventually flourish beyond the genre in which he made his mark. 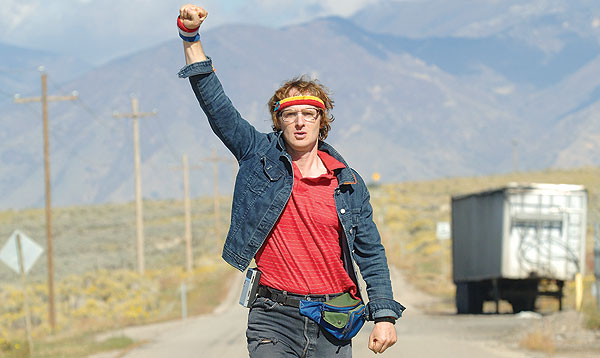 "The Worst Movie I've Ever Seen at Sundance"

The festival has seen its share of bad movies over the years, but the first one to truly make me angry was 2008's "Adventures of Power." Ari Gold, who wrote and directed the film, also starred as a spastic wannabe air drummer who in his travels to the national championship meets assorted weirdoes and falls in love with an Evangelical deaf girl. Aside from the momentary absurdity of air drumming on a construction site to Mr. Mister's "Kyrie", the film was utterly painful for the remaining 80 minutes and was enough to make "Napoleon Dynamite" haters rethink their position. There have been worse films since at Sundance and may have actually been worse films before, but this was the same year that Kurt Kuenne's heart-wrenching and virtuoso documentary "Dear Zachary" had been relegated to Slamdance after being rejected by Sundance. At least one slot was taken up by "Adventures of Power".

Sitting in the Yarrow Hotel screening room watching Morgan Spurlock's "Where in the World Is Osama Bin Laden?" his follow up to his Sundance hit "Super Size Me" my phone buzzed with a text from a friend from Chicago. Heath Ledger had died. Time stopped. A 28-year-old actor who was just coming into his own as a respected one was gone. We were still seven months away from "The Dark Knight" and here was an entire hallway of critics and reporters after the screening checking their phones, making calls, looking for confirmation and flooding into the Yarrow bar for the nearest television. None of us cared what the next movie was. We just thought of all the ones that would no longer have Heath Ledger in them. A very sad day.

Perhaps it is not a tip that needed to be learned in a thin climate, but it is one that is too often forgotten by certain folks in Park City. Be nice. It is a simple, time-tested piece of advice that should have been instilled before the first day of Kindergarten. There are countless volunteers trying to help you get you to your next location and keeping the lines organized and moving. Do not yell at them. No matter what your badge says, you are no more important than the person in front and behind you. Treat them and the filmmakers with respect too by not texting or checking your e-mails during the screenings. You can be certain there was someone who got shut out of that screening that wanted to watch the movie and not conduct business.

"The Best Discussion I've Had After a Sundance Movie"

There were at least eight of us who walked across the street to the new burger joint after Craig Zobel's "Compliance" in 2012. We had heard of some controversy at the premiere's Q&A the night before about accusations of sexism and more. That turned out to be just a small part of what a group of film critic colleagues got into over lunch praising Zobel's work. The film is based on a true story about a call that comes into a fast food outlet from a voice claiming to be a cop and accusing one of the employees of theft. What happens after that calls into question issues of authority, responsibility in blind acquiescence, and the moral conundrums of not just obeying but the threats to our own decency by becoming just another pawn in the game. That was just without discussing the script as a pitch black comedy or the performances by Ann Dowd, Dreama Walker and Pat Healy; all of which were brought up. Discussions (for movies that demand it) are one of the great parts of cinema, no matter what the budget or where the location. Everyone can be a critic, though it is nice when the professionals get together first before going straight to their smartphone.

"Not Every Film is Hoop Dreams"

The tendency at a film festival, particularly now in the give-it-to-me-now enhancement of the Twitterverse, is to announce you have found the one film that nobody else has that is going to be the next big thing. Never mind the hundreds of critics and journalists all hoping to find it as well. But as the saying goes in poker, if you can't spot the sucker at the table then you're it. Not to diminish one's enthusiasm to want to give a new filmmaker or actor the necessary ink to launch their careers, but here's a piece of advice to festival virgins. If you feel ready to praise something in under 140 characters, hit the pause button and think it over. How many films go from Sundance sensation to joining the list of the overhyped in just a few months or even just by its second screening? Every critic has 20, 30, sometimes over 40 movies they will watch during the festival and through screeners. Keep everything in perspective. Know when to inform, when to praise and when to hype.

"The Film I Most Regret Missing In the Moment At Sundance"

This is a tough one considering all the great ones that have premiered there. "Beasts of the Southern Wild" springs to mind. I remember being offered the chance to see "Once" on the very first morning in 2007. The film's publicist was staying directly across the hall at my hotel. I don't even remember what I saw instead. That was a big miss. But the biggest may have been just last year when Damien Chazelle's "Whiplash" kicked Sundance off with a Twitter barrage of enthusiasm while I ate chili at a crowded party after getting settled in too late. Can you imagine being there for that final drum solo? Or for the first time J.K. Simmons swore or threw something at his students? That was the beginning of an Oscar run for one of our great character actors and the energy at that screening when it went to black probably could have been heard all the way to a crowded chili party.

Six years after seeing Debra Granik's "Down to the Bone" at the festival, all that remained of it was Vera Farmiga's performance as a cocaine-fueled junkie trying to go straight. Nor was I aware of the Daniel Woodrell novel she was now adapting for her 2010 follow-up. But I sat there through "Winter's Bone" transfixed by a young actress named Jennifer Lawrence. I remembered a little about her as a young Charlize Theron from "The Burning Plain" but this was her movie. And it was her moment. This was no mere fascination with beauty or moviestar glamour. There was no suggestion of that as a hillbilly's daughter in the Ozarks making squirrel soup. This was a performance of such authority and determination (and of seemingly minimal effort) that it was bound to capture the attention of anyone who saw it. I knew then and there that Lawrence was going to be an Oscar nominee that year. As certain as I knew she would win after taking control of a living room of grown men, including Robert De Niro, in "Silver Linings Playbook". "The Hunger Games", "X-Men", three Academy Award nominations and an Oscar for Best Actress all began at Sundance with that first screening of "Winter's Bone".

"My Most Memorable Year at Sundance"

Year two at Sundance was one that certainly measured up as one of spoiler for years to come. In 2004 alone, I got to see not just James Wan's "Saw", but Morgan Spurlock's "Super Size Me", cult hit "Napoleon Dynamite" (which I continue to stand by), Christian Bale's shocking weight loss in Brad Anderson's "The Machinist", Shane Carruth's time traveling "Primer", the nail-biting shark thriller "Open Water", Thom Andersen's nearly three-hour documentary "Los Angeles Plays Itself" about the depiction of the city in films over the years (which was only just released to DVD last October), and what turned out to be my favorite film of that year, Zach Braff's "Garden State." Plus just think of all the films I missed that year including Mario Van Peebles' "BAADASSSSS!", Catalina Sandino Moreno's Oscar-nominated performance in "Maria Full of Grace", the Oscar-winning documentary "Born Into Brothels", Bernardo Bertolucci's "The Dreamers" and the introduction of Eva Green.

Films I have slated to see this year include Kirby Dick's "The Hunting Ground", Joe Swanberg's "Digging for Fire", James Ponsoldt's "The End of the Tour", Anna Boden & Ryan Fleck's "Mississippi Grind", Craig Zobel's "Z for Zachariah", Sebastian Silva's "Nasty Baby", Jared Hess' "Don Verdean", Kyle Patrick Alvarez's "The Stanford Prison Experiment", Bobcat Goldthwait's "Call Me Lucky", Andrew Bujalski's "Results" and Alex Gibney's "Going Clear: Scientology and the Prison of Belief." And that’s just a third of my schedule. Memories are about to be made again.