Pirates of the Riviera

It's another cool and overcast day in Cannes, but one that promises to be dominated by pirates and outlaws in the morning, and kids in the afternoon. The out-of-competition premiere European screening of "Pirates of the Caribbean: On Stranger Tides" was scheduled for the Grand Theatre Lumiere at 8:30 am. This meant that European critics would flock, but Americans like me were freed up to roam elsewhere for our viewing. For my first film I opted to walk down the Croisette to see a pirate of a very different kind in "Porfirio," a Colombian film by Alejandro Landes, in the Quinzaine (Directors Fortnight) section of the festival.

"Porfirio" is a scripted and lightly fictionalized account of the life of a man the Latin American press had dubbed "the air pirate." Actual events reenacted in the film by non-professional actors, including the original central figure in the story, Porfirio Ramirez Aldana. Porfirio made headlines in 2005 for hijacking a plane to Bogota.

What attracted Landes to the case after reading a sensationalized newspaper account was the fact that the hijacker is paralyzed from the waist down, confined to a wheelchair, and was wearing diapers at the time. The director spent five years working with his subject and his family to develop their trust, and only revealed to the man a few days before shooting began that he would play himself.

This is a film that demands patience because it is in large part a study of the life that was the catalyst for such an extreme action. The circumstances of the hijacking are revealed only in the final ten minutes. This is not a heist film, but a realistic look at a man whose outsized personality is at odds with the disability that was caused by a policeman's stray bullet. It's a study in what Landes refers to in the press notes as "the notion of the body as prison to the soul. There's a coda in which Porfirio faces the camera and sings a lively improvised song about his daring exploit and the duplicity of Colombian authorities. It's the film's big payoff, but it's a long time coming. 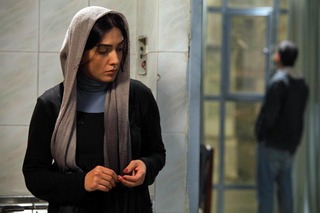 My next film of the day was "Goodbye" or "Be Omide Didar" by Mohammad Rasoulof ("White Meadows," "Iron Island"), the Iranian director who, along with Jafar Panahi, has been sentenced to six years in prison for allegedly "propagandizing against the regime." Panahi also has a film in the festival, which will screen on May 20. The festival has announced that a press conference will follow that screening in order to clarify the current situation of these two directors, who have been made outlaws by their own government for the act of making art.

In the meantime, updated information regarding their plight is slight. No press notes have been made available for "Goodbye," and I'm not completely clear on whether the director is now in jail, out on bail, or allowed to work at all. I've been told by Iranian friends that some of the details of his sentence are not as harsh as Panahi's. In any case, the content of "Goodbye" would suggest that he is taking a very great risk to send this film to Cannes.

A woman's increasingly difficult and desperate attempt to leave Iran is the focus of Goodbye." Noora, a young lawyer, has been disbarred. It is hinted that this was due to some form of activism. Her husband, a journalist, lost two jobs in succession when the newspapers he worked for were shut down. He has since gone underground and broken off contact with her. Noora's pregnancy is a factor in her complex dealings with a man who specializes in devising immigration schemes for hire. When her doctor suspects that she may be carrying a Down syndrome child, Noora begins to consider an abortion, but this too is a problem. 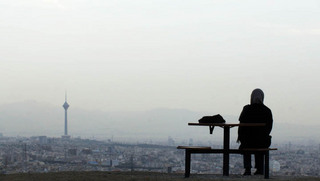 Through the routine of Noora's life, Rasoulof details the abundant threats to freedom that plague the average citizen--her satellite dish is taken away because satellite TV is illegal in Iran; as a woman, she cannot undertake a whole range of medical procedures, or even check into a hotel, without her husband's permission. Rasoulof also depicts the specific terrors that attend anyone who is seen by the regime as a dissident. The scene in which two plain-clothes police ambush Noora in the tiny elevator of her apartment building and interrogate her as they keep the car in motion is a standout example.

"Goodbye" is filmed in muted colors. Rasoulof's frame compositions are elegant but convey a deadly, sleepwalking calm. A pet turtle becomes a metaphor for Nora's situation as it circles and paws the slippery sides of a plastic tray, unable to get a foothold to get out. One day the turtle disappears.

For some unknown reason, the festival scheduled no press screening for Markus Schleinzer's "Michael," one of only two films by a first-time director in the competition ("Sleeping Beauty" is the other). Press was allowed to attend the official screening in the late afternoon, which created one of those typical madhouse situations that can be frequent here. Guards blocked off access to the front of the Palais and closed nearby intersections. This meant a walk many blocks down the Croisette through a maze of stanchions in order to reach the lane that led to the designated entrance. Security was extra tight today, and my bag was inspected three times before I got a seat in the theater.

Although Schleinzer is a first-time director, he was the casting director for films including Michael Haneke's "The Piano Teacher," "Time of the Wolf," and "The White Ribbon," for which he also coached the children. "Michael" is about a pedophile who is keeping a 10-year-old boy in a prison chamber in his suburban basement. 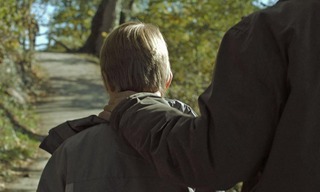 The character Michael leads a double life. He's a diligent employee; he has friends; he's on good terms with his family. He often treats his victim as if he were a stern foster parent, making him help with chores, monitoring his TV time, and even taking him on the occasional outing, albeit with a firm hand at the back of the boy's neck. The first time Schleinzer provides a glimpse of the chilling reality, Michael is seen entering the prison room and closing the door behind him. In the next shot, he's upstairs at his bathroom sink, casually washing his penis.

There's an all-pervasive coldness to this film. The boy is treated like a pet. When he becomes seriously ill with flu, Michael takes the precaution of having a grave in the woods ready. When he goes on a skiing trip with male pals, he simply stocks the little prison with an extra supply of instant noodle cups and locks up.

Michael's emotionless precision is given no counterpoint in the larger milieu in which he operates. Schleinzer may or may not be making a larger statement about contemporary society, but at least half of his audience wasn't buying it. The director and cast were present, and when the film ended, a smattering of polite applause was followed by boos, catcalls, and whistles, the first I've heard this festival. 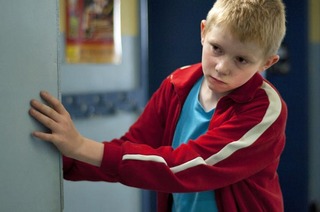 The flip side of "Michael" was apparent in "The Kid with a Bike" by Jean-Pierre and Luc Dardenne. Two-time Palme d'Or winners, the Dardenne brothers have made treating stories of children at risk the specialty of their careers. If "Michael" is essentially about a boy lost to a life and a future, "The Kid with A Bike" is about a boy of similar age redeemed by love.

A tow-headed pre-teen, Cyril has been abandoned to the care of a children's home by his father, who has disappeared without a trace. The boy refuses to believe his dad has moved away and left him despite all indications to the contrary. Blind faith, irrational impulses, and magnetic attraction all figure in this story as Cyril impulsively finds a foster mother who begins to pull him into the normalcy of family life. 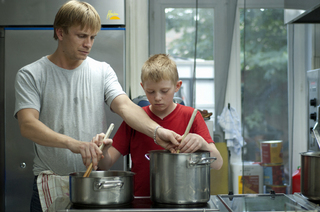 Samantha, a single hairdresser, is drawn to Cyril just as he is drawn to trust her, and yet there's no denying that he gravitates to father figures, no matter how unwisely chosen. Samantha tracks down his real father, now a prep chef in a small-town restaurant, and takes the boy to see him. The dad crisscrosses the kitchen while working, Cyril following his steps back and forth. In scenes like this, the directors make the emotion of longing for family very palpable. Ultimately, every single male in the film will betray Cyril's trust. Even the two men he victimizes in his brief foray into crime prove prone to evil when the tables are turned.

It's hard not to like "The Kid with a Bike," and yet I missed some of the edge that the Dardennes brothers usually bring to a film. This one is a bit too much like a fairy tale, not that you don't want to believe it. Samantha is so good, patient, understanding, and forgiving, she's the mom nobody in this world ever had. I think of the cautious relationship between the carpenter and the boy in "The Son," and it seems so much more grounded in the realities of human interaction.

The reaction in the Palais to "The Kid with a Bike" was extended applause. It will take a week to find out what the jury thinks, and whether the Dardennes brothers can pull off a Cannes threepeat. 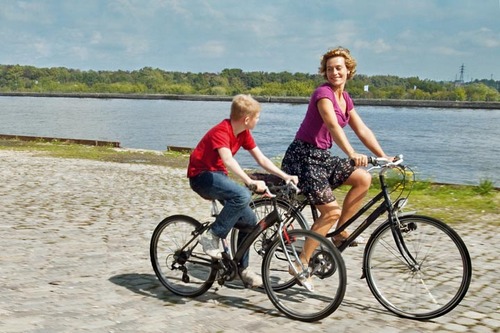