A camera is an instrument of black magic. Roll film, capture the instant forever. But that image is a lie. It's a copy of the real thing. Make it brighter, close the window, turn on a light, and the moment is now artificial. It's no longer what you experienced, the room you were in, the things you felt, the girl you remember sitting next to. A shade of yourself looks back at you when you replay that image. The ‘60s & ‘70s are gone forever, and we can only hope to relive them through the images of the era. Whether that's the photographs of Brad Elterman, Eric Calonius and Lyntha Scott Eiler, or movies like "Medium Cool", "Hickey & Boggs" and "The Unholy Rollers", it hardly matters. Everything is a snapshot, everything is a lie. And there is no greater lie than Los Angeles.

L.A., and the cities that nestle against it like puppies lazily trying to nurse, is where dreams and phantasms have radiated for a century. Cinematic California is a place pock-marked with crowded beaches, sun-dappled street corners, pleasantly empty diners, sand-polluted shacks and never-too-busy streets. God seemed to put the place under a microscope whenever Van Heflin stalked a married woman or Dick Powell's eyes wandered or Ralph Meeker wouldn't take a dead end for an answer. There was discontent in every wave, every breeze passing through every palm tree. If you took all the dreams every poor doomed dreamer ever put down in his notebook and hit 'blend,' you'd find yourself in the world of Paul Thomas Anderson’s "Inherent Vice". The county lines separating Los Angeles, Hollywood, San Francisco and Santa Monica blur like the plots of "Crime Wave", "The Killing", "Gun Crazy" and "The Lady From Shanghai", and paradise melts entirely. The L.A. in our imagination is a place overrun with burnt-out stragglers in the shadow of diabolical architecture. It's over. Nobody wins. 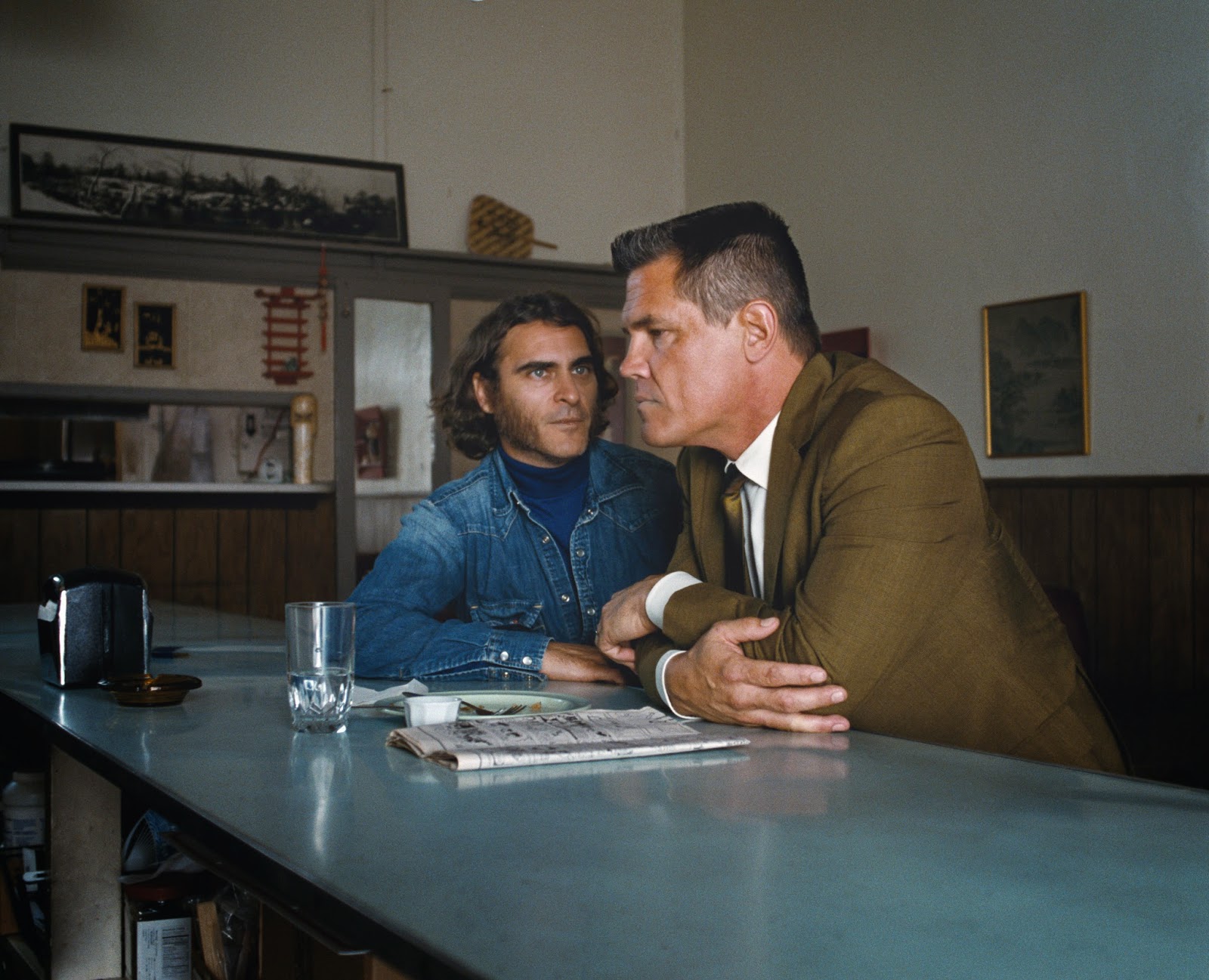 Enter Paul Thomas Anderson, who has entered California's alter ego like a detective, hoping to find out what exactly went on back in the day. What accounts for the creeping paranoia of so much of the art that grew like mold on the model-good-looks of the city? What went wrong? How did Frankie Avalon and Annette Funicello become Jack Nicholson and Faye Dunaway in just under a decade? Where did the lies and the truth overlap? "Inherent Vice", using the blistering, painful form of confessional cinema P.T.A. uncovered while making "The Master," drifts though L.A.'s cinematic past, wearing the clothes of film noir like a thrift store suit, like "Harper", "Brick", and "Point Blank" before it.

Joaquin Phoenix is Larry "Doc" Sportello, the funniest and most lovable person he's ever become. Dressed like Country Joe & The Fish guitarist Barry Melton during their Monterey Pop concert, Doc is a Private Eye who's blitzed all the time, yet never lets a lead slip. An old flame comes to him with a case, but he only gets serious when she goes missing the following day. Doc wades through an imagined history of L.A. Noir looking for clues. Gordita Beach, the fictional locale of "Inherent Vice" is the same beachside nowhere that's played host to a hundred who-dunnits before and Doc is the gamest private eye in town. He's not just after what happened to his ex-girlfriend, Shasta (Katherine Waterston), but for the California of a country's subconscious, our once-pristine innocence. 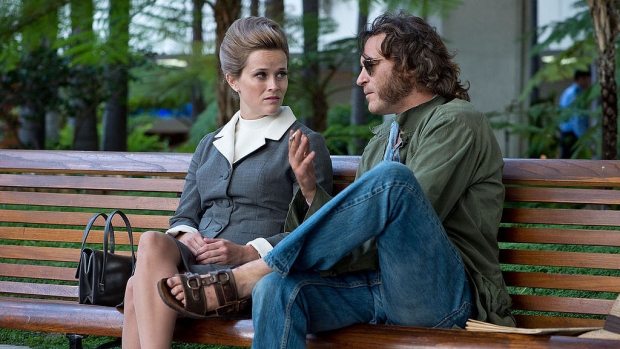 Early in "Inherent Vice," Doc watches a Ralph Wolf and Sam Sheepdog cartoon, the best of the Chuck Jones stable. That's important because the world and Doc play an endless game, trading the role of Ralph and Sam whenever convenient. Time and again, Doc dresses up like a sheep to fool the sheepdog. The difference is he's trying to protect the innocent, but he gets beaten all the same. Doc's life is a cartoon he willingly participates in. Cops, federal agents, Nazi bikers and daffy sex workers alike keep pushing him down, but he keeps getting back up and enjoying every second he gets to mess with them until they knock him down again. Life is a game for Doc, and he's the only one who gets it, but even he has to play by the rules from time to time.

P.T. Anderson, however, does not. Like Quentin Tarantino in "Pulp Fiction," Alex Cox in "Repo Man," and most importantly Robert Altman in "The Long Goodbye," Anderson sends the lifeguard home and dives headfirst into the murky waters of film noir. If you can imagine the color palette, the shifting light scheme, the perfect production design and bruising honesty of “The Master” applied to a slinky noir template, without forgetting that Ralph and Sam dynamic, that oughta put you squarely in "Inherent Vice"'s milieu. And if you're still with me, then you know what's good for you, because there's nothing in the world like "Inherent Vice." Might never be. 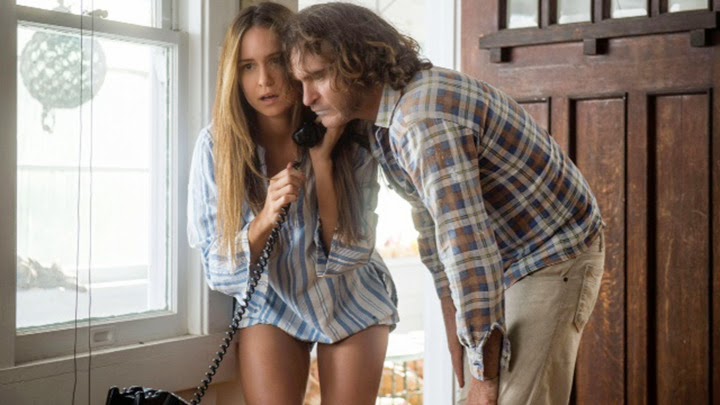 The light's always a little too bright wherever Doc goes in search of clues. Robert Elswit, who mapped P.T. Anderson's world by shooting his first five films, lets light leak into the frame like runaway paint. It makes the image heavier, more honest, and makes Doc appear too close to the screen and sunk too deep in his chair. As free and goofy as Inherent Vice gets, it always weighs a ton. Thus the bolts of manic comedic energy scattered throughout unseat you with twice the force. Joaquin Phoenix's sad eyes fill with piercing, uninhibited light, bidding you swim in an ocean of melancholy, and then he blindsides you with a punchline. It takes a little getting used to. It should. No one's ever quite spoken this language before, so translating it is going to take time. Hard boiled shamus speak comes from the unshaven jaws of hippies, cops take extra work as actors, squeaky-voiced waifs deliver grizzled narration lined with astrological warnings, saxophone players are police informants, and so on. It's a fictional construct gone topsy-turvy. Swim against the current, if you want, but it's better to let the tide take you.

"Inherent Vice" is just the right amount of too much. It's Anderson's funniest film, if also his most willfully strange. It's a showcase for a charmingly offbeat cast (Owen Wilson, Jena Malone, Eric Roberts, Benicio Del Toro, Reese Witherspoon, Martin Short, Josh Brolin) doing their best work in years. It's a laurel canyon rock album set in images. It's an inversion of the detective film, the last we'll ever need. It's a hippie "Harper," babbling, paranoid and silly, yet without taking leave of the stakes. Perhaps most beguilingly, it's an attempt to recreate an unreal history. It asks us to imagine what it would be like to have actually lived in the ‘70s sold to us by "Big Wednesday" and "Chandler." To feel the fabric, smell the salt air, gaze at the bleached skylines and rub against the unkempt mutton chops of the last honest man in the world. Robert Elswit and Anderson light "Vice" like a photograph that has to define an era and its attitudes. Yet, it's confident enough to know that such a task is impossible, so it just draws on the wall like graffiti.

Anderson is the most confident he's ever been, hijacking tones like a claim-jumper, never trying to ingratiate you into his baffling form. And he has every right to be. A film like this, a lustrous cloud of silver halide, will always make friends with weary moviegoers. If you lived through the era it struts through, you'll get it. If not, you'll clutch at its every loose end as a clue to the era that has come to define the one we live in now. P.T. Anderson was born in 1970, the year his weed-fueled epic transpires, and I bet "Vice" rings as true to him as his own memories of a troubled decade, when all the air was let out of a nation's future. After all, we can rewind movies, watch a scene again, answer all our questions, just like casting a spell on time itself. "Inherent Vice" is pure black magic, a delirious hallucination and the most entertaining film of the year. Even calling it a film seems to sell it short somehow. It will outlive us all, like an unkempt wraith with a glint in its eye.