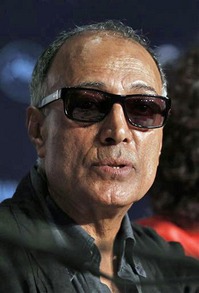 May 18 -- Some Cannes traditions never die. In the years I've been coming to the festival, the same music has been playing in the Grand Theatre Lumiere before the early morning press screening. It's always jazz, and it always seems to be the same selection every morning, every year. I've started to imagine that there's some ancient reel-to-reel tape recorder in a distant control booth, and that a guard is assigned to rewind and start the old tape at 8:00 am each day.

Sound or more specifically, language is central to Jean-Luc Godard's "Film Socialisme." Roger has commented so thoroughly on that film that I'm not going to add much, except to say that Godard remains one of the grand tricksters of world cinema. With his French dialogue, minimal and cryptic subtitles in so-called "Navajo English" (this in itself seems a tongue-in-cheek fiction on his part), and bits of a few other languages thrown in, he creates a Babel that I believe was made to baffle and intrigue one and all, no matter what your native tongue. It's a kind of rarefied fun to try to decipher, and maddening at the same time. Meanwhile, Godard the magician, like the wizard in "The Wizard of Oz," gets to hide behind his screen, sending out big ideas and big images.

Iranian Abbas Kiarostami would not be the first director to be tripped up by making a film in a language other than his own. His "Certified Copy," starring Juliette Binoche and British opera singer William Shimell making his screen debut, is in English, French and Italian, and shot in Tuscany. This is the story of a man and a woman, who meet, spend an afternoon in each other's company, flirt in a jagged, contentious sort of way, and for a few hours fall into the relationship pattern of an unhappily-married couple of fifteen years. According to synopsis in the press kit, this is "a common story that could happen to anyone, anywhere." 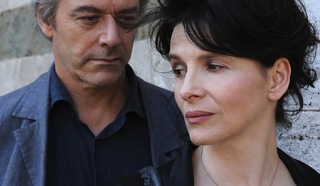 Some of the hallmark motifs of a Kiarostami film appear quite early. The affectionate way in which a lively young boy is filmed harks back to the director's early films with children. It would hardly seem to be a Kiarostami film without some scenes in a car, and the first major conversation between the man and the woman, in which they argue about art theory, takes place in her car while they traverse the kind of winding roads that will be familiar images to Kiarostami devotees.

I so much wanted to like this film; my hope was that it would be good, if not great. "Certified Copy" has many fans here in Cannes, even those who tout it as a potential Palme winner, but I regret that I'm not one of them. The idea, that two strangers could become a couple, if only briefly, is universal and full of possibilities. The setting is extraordinary. The dialogue is pretentious, the acting shrill and strained.

The characters are not particularly likeable, and they become less so as the plot unreels. Binoche's character, a French woman who owns an art gallery in a small Italian town, is played as a harridan who never stops taking, never stops finding fault with the opinions and the actions of the man to whom she's allegedly attracted. The man, a famous author in the midst of a book tour, is first sullen but curious. He braves the mercurial ways of his companion for the afternoon, eventually becoming boorish and loud. Binoche portrays her character as unpredictable, possibly even unstable; she's in a perpetual state of annoyance motivated by unrealistic expectations. In real life, the man would have begged a ride out of town and escaped this fruitcake as fast as possible. 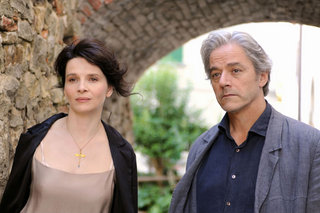 At the woman's prompting, the two fall into role-playing as they walk around a village famous as a site for weddings. In the context of this fiction, they argue about their child, about their wedding night, about their anniversary, and about his behavior the previous night. Finally, with full-blown hostility, they argue angrily and vehemently about the wine in a restaurant. The performances are so stilted, and the two stars seem so out of sync with each other, that we need to take it on faith that there's some shred of attraction there.

It seems to me that several major problems contribute to this situation. William Shimell is simply not a very good actor for the screen. He has a handsome and sympathetic face, and for all I know, he may be great on the opera stage, but he's a stagey and unsubtle actor in this film, proclaiming his lines as if to a theater of thousands. There's little attenuation in his delivery, especially when he's called upon to argue.

The interaction between Shimell and Binoche, especially in the most critical scenes of confrontation, is histrionic to the extreme, and rings false, undercutting the story rather than supporting it. I can't help but credit this to a cultural disconnect on Kiarostami's part. The rhythms of the languages are unfamiliar to him. As much as he understands human nature, he has not been able to bring emotional veracity to "Certified Copy." 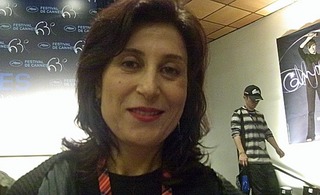 I wanted to know what Kiarostami would have to say about "Certified Copy," and whether the questions from press would be positive or negative, so I attended the press conference on Tuesday afternoon. I immediately ran into Fatemah Motamed-Aria, known in real life as Simin. Award-winning star of Iranian films including "Gilaneh," "Banoo," and "The Blue-Veiled," she's one of Iran's greatest and most beloved actresses, someone I call the Meryl Streep of Iran.

A few months ago, Motamed-Aria was one of several major film figures who had their passports confiscated by the Iranian government as punishment for alleged protest activities. I was very happy to learn that she now has her passport back and is able to travel. Her last film was banned, and has not been seen outside of Iran. For the time being, she has chosen not to work under current conditions.

Little did I know that the subject of dissident filmmakers would become central to Kiarostami's press conference, largely overshadowing the discussion of "Certified Copy." As rarely happens in a Cannes press conference, politics impinged upon art. The moderator announced that Kiarostami would like to begin by making a special statement to the press. 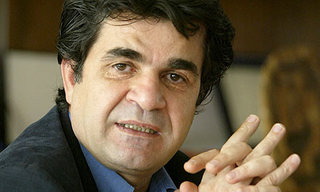 Kiarostami proceeded to relate that he had within the past few minutes received a message to call the wife of imprisoned Iranian filmmaker Jafar Panahi. He believed that this was a possible indication of hopeful news, "If he could be freed today, it would be an excellent sign," he said, "I believe what we can say for sure is the fact that a filmmaker has been imprisoned is intolerable. . . I believe one cannot remain indifferent in the face of the situation, but one must not give up hope either."

As Kiarostami continued to speak (in Persian through a French interpreter, who was translated into English by means of headphones worn by those of us English-speakers), there was late-breaking news. A note was handed up to the podium and it was announced, although unconfirmed, that Jafar Panahi had just begun a hunger strike. 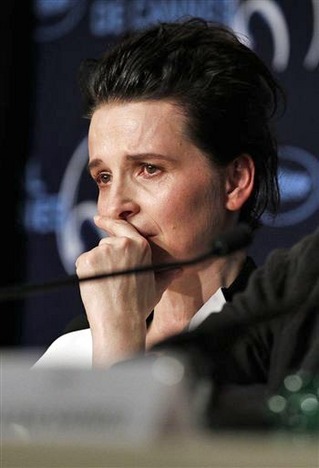 Binoche, sitting next to Kiarostami, began to cry, and sat with tears running down her face for some minutes until a festival assistant handed her a tissue. The director continued to address the difficulties faced by filmmakers in Iran. "The [Iranian] government finds it difficult to accept independence in filmmakers. This is the situation we have lived with for 40 years now...The arrest of Jafar Panahi is a sign that things have been taken to a new level in Iran."

Kiarostami begged the European press to take and publish printed copies of his public statement in protest of Panahi's arrest that was published in the New York Times on March 9, 2010. A large stack of the two-page letter was made available on the press conference podium. He said that although the statement was published in the U.S., it had been largely ignored in Europe. In part, it reads "Filmmaking is not a crime...My heartfelt wish is that artists no longer be imprisoned in this country because of their art and that independent and young Iranian cinema no longer face obstacles, lack of support, attention, and prejudice."

I left the press conference with a heartfelt wish that, among other things, I thought that "Certified Copy" was a far better film.