The end of things is in the air. Three years after Lars Von Trier obliterated the Earth in "Melancholia," it seems like every other movie is either about the world collapsing or nearing an end amidst spectacular convulsions. We dread the Apocalypse in "Elysium" and "World War Z," we laugh it off in "This Is the End" and "The World’s End," but it still seems like it’s stuck on us like some epically unwelcome suitor. In "The Rover," David Michôd’s eagerly awaited follow-up to the award-winning "Animal Kingdom" (screened today in Un Certain Regard section of Cannes Film Festival), the end sort of happened already: the opening credits inform us that the action is taking place in Australia, "ten years after the collapse."

The movie never informs us whether the latter was economic, environmental or military in nature—although judging from a variety of cues peppered here and there, it was some awe-inspiring combination of the three. All sense of community is lost: people don’t form groups or tribes, and whatever individuals are left, live on sparse means, accepting American dollars as the only valid currency. There are no rituals, no civility or religious beliefs—nothing to hold on to. The world of the movie, with its arid landscapes and roaring vehicles, as well as the sense of total failure of humanity to produce anything resembling a culture, makes one think back to the "Mad Max" movies, Cormac McCarthy’s "The Road" and the grand finale of Erich Von Stroheim’s "Greed", with people clubbing each other to death in the middle of the desert (still lustful for pots of gold more than they are thirsty for a cup of water).

"The Rover" centers on Eric, played by Guy Pearce, whose detachment from what’s left of the world make him seem a version of the short-term-memory-challenged vigilante the actor played in "Memento." An early, striking image shows him having a drink in a dingy den of a place, with a car sent flying behind the window in a spectacular crash that the man completely fails to notice. (Or maybe he just doesn’t care?) Still, the car crash triggers a mission that fills the remainder of the film: Eric starts a chase after the people who stole his vehicle to obtain a replacement for the one they had crashed. It’s as if Eric had no other way of defining himself as a human other than by clinging onto the notion of property—recovering his car becomes his mission, which is then enhanced by escorting a slow-witted brother of one of the gang members. Rey (played by Robert Pattinson in a deglamorized performance) is all inarticulate twitches and forlorn gazes: he’s hapless, scared and naïve. The strange Western-like journey that follows takes both men to the extremities of survival and violence. 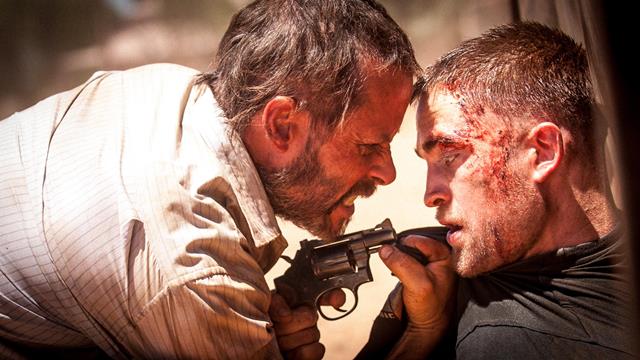 Unlike the supremely plotted "Animal Kingdom", "The Rover" is as stripped down as possible, with few surprises and no big revelations toward the end. The characters speak sparse, cryptic dialogue with no payoff to speak of. It becomes clear early on that the director is more after creating the mood of violent desolation than revealing anything about the characters that would make them richer. This strategy proves to be double-edged, since Michôd’s obvious talent for framing, cutting and mise-en-scene whets out appetite for a fully imagined cinematic world, while the basic view of post-Apocalypse we get wears down rather quickly.

While there’s no doubt Michod was striving for something primal and mythical in "The Rover," there is a sense the film is searching for its meaning as it goes along, which ultimately leaves the viewer clueless. The tone varies form a violent morality play to an absurdist poem, with people reduced to disposable objects (an early, unexpected killing of a dwarf drew both laughs and shrieks of horror from the audience, and I’m still not sure which reaction Michôd desired). There is a huge amount of talent on display in "The Rover", and the opening ten minutes is as captivating as anything you’re likely to see at the movies this year. In it, Michôd presents pieces of his narrative puzzle in a series of near-surrealist vignettes that we’re excited to see come together.

Unfortunately, they never do and the final showdown is an unwitting symbol for the film’s irresolution. In a surprising turn for a director so apt at telling stories and revealing depth of his characters, Michôd takes us to a scary place, but fails to tap into its rotten human heart. The film is not about greed, it’s not about friendship and it’s not about resilience. A clear theme never emerges, and while the supremely created sense of dread may linger for a bit after the screening is over, the movie evaporates from one’s head very quickly, the way "Animal Kingdom" still refuses to despite the years that have passed since its premiere.