The intrepid five-day event offers 25 alternative programs on two of the four screens at the Logan Theatre, 2646 North Milwaukee Ave. Admission is $10. Mainstream fare currently playing on the other two screens at this neighborhood venue includes “Keanu” and "Captain America: Civil War.”

Presented by the non-profit Independent Filmmaker Project–Chicago, CUFF goes outside the lines of “underground” and “independent” drawn by the orthodox. The less than doctrinal guidelines for festival entrants invite “films and videos that dissent radically in form, technique, or content from the `indie’ mainstream … that challenge and transcend commercial and audience expectations.” Putting “indie” in quotes like that is CUFF’s way of distancing itself from such dated specimens as “sex, lies, and videotape” (1989) and “Man Woman Film” (1999).

The 2016 jury is on the mark. Jeffrey Bowers curates video at Vimeo and VICE. Rebecca Hall, a co-founder of the Northwest Chicago Film Society, works at the Gene Siskel Film Center. Spencer Parsons is a long-time CUFF entrant who’s programmed Cinematexas International Short Film and Video Festival, and teaches media production at Northwestern University in Evanston, Illinois. Novelist Tim Kinsella is a singer and mainstay of the Chicago band Joan of Arc.

One of two world premieres this year is the highly recommended “Tony Conrad: Completely In The Present,” directed and edited by Tyler Hubby [pictured above]. This Opening Night documentary on June 1 (8pm) has a special $20 admission that covers an after-party at Elastic Arts Center with live film performances. The subject—a minimalist musician, experimental media artist and art school prof—planned to receive his Lifetime Achievement Award, but died April 9th at age 76.

During a FaceTime interview—with a “Kill Your TV” postcard in sight behind him—Hubby recalled how Conrad’s analytical aesthetic carried over to his fashion sense: “He’d buy clothes he didn’t understand.” He once asked about Conrad's pink pants. Always a prankster and deconstructor, the artist answered: “I don’t understand them. But I’m going to wear them and come to an understanding of them.”

In the 1960’s Conrad split rent on the Lower East Side with Welsh musician John Cale, who’d soon go onto the Velvet Underground, and with underground filmmaker and performance artist Jack Smith. Conrad made the soundtrack for Smith’s “Flaming Creatures,” a film notorious for its gender flux and transgressive eros.

Smith’s drag and camp sensibilities resurface in Luther Price’s self-referential star vehicles. Made in the nineties, these Super-8mm efforts evoke the sixties films by Smith and Andy Warhol. This Boston filmmaker is scheduled to attend both the festival and an opening of an exhibition at Mana Gallery of Contemporary Art, where slide carousels will project his photos. Price’s “Clown” (1992) and “A” (1995), digitally restored by Anthology Film Archives, screen on June 4th (8pm). They are tedious and ambiguous parodies of trans-style nostalgia that I cannot recommend. 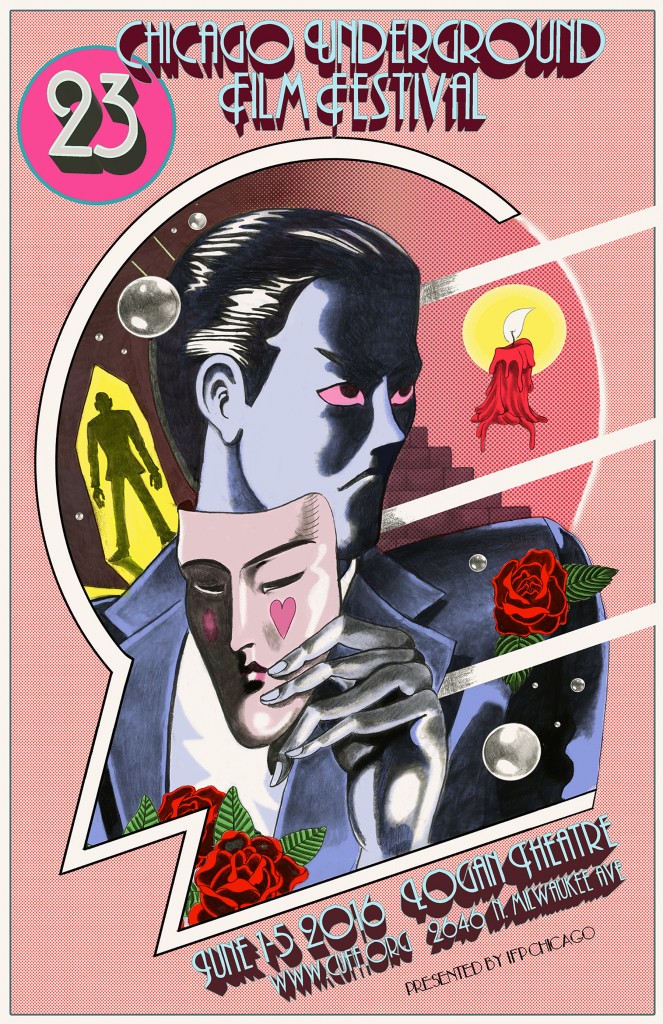 The best feature I previewed is “The Sky Trembles and The Earth Is Afraid and the Two Eyes are Not Brothers.” The only fest film projected in 35mm, it screens on June 2nd (7pm). Nine 16mm prints are in the line-up too. Ben Rivers’ exquisitely shot experimental narrative observes a film director exit a shoot in the Atlas Mountains. He is played by Spanish director Oliver Laxe, who lends Rivers footage from a feature Laxe was making—set in late medieval Morocco. The out-of-place character falls prey to bandits who outfit him a robe sewn with clanking lids from tin cans. They make him dance, and then sell him. This allusive allegory of Orientalist payback derives from Paul Bowles’ 1947 short story “A Distant Episode.”

“The Love Witch” boasts a look not typically yielded by underground budgets. Anna Biller is busy as producer, director, editor, composer, art director, set decorator and costume designer in this feminist take-off playing June 2nd (9pm). A knock-out witch on the run relocates and casts fatal love spells. “Guys can’t handle their emotions too well,” explains one witch. “That’s why they don’t like heavy conversations.” The outcome is an affectionate homage to exploitation cinema, though less surreally cynical than her “Viva.”

Reflexivity is de rigeur at CUFF. “Director's Commentary: Terror of Frankenstein” by Tim Kirk is billed as “metafictional tragicomedy.” Scheduled for June 3rd (9pm), this curious, if uneven, exercise appropriates “Terror of Frankenstein.” As we watch that 1977 feature on the screen, we listen to what is supposed to be an unedited recording session for a DVD commentary track. The director, screenwriter and star reminisce about the shoot and the lurid headlines that ensued. Ghastly revelations ensue about monstrous murders after the shooting stopped. This almost works as a radio drama, despite lines like “That’s hard to imagine how high somebody would have to be to cut off their own head.”

Many shorts do better at deconstructing facets of cinema, ranging from celluloid and its scratches, to continuity and Walt Disney. Check out "16mm Sound Film” by Aaron Kutnick; “Over & Over” by Michael Fleming; “Discontinuity” by Lori Felker; and “Rabbit Season Duck Season” by Michael Bell-Smith.

The abiding underground agenda guiding this festival of provocations surfaces in the short “Chums From Across the Void” (June 3rd, 8:30pm) by Jim Finn, who screened “Encounters With Your Inner Trotsky Child” here two years ago. In the guise of a guided mediation for Past Leftist Life Regression therapy, his latest film contains a voiceover that counsels: "Without money in the prime material plane of corporate capitalism, you are like a horse with opposable thumbs lead by cave dwellers deeper and darker down into the Earth until there is nothing more to see. There you are left cold alone to die or to continue on with your life such as it is.”