The social niceties begin to go by the wayside at the Cannes Film Festival as the days go on. Festival Palais guards start looking like the enemy when schedules go awry and hundreds of journalists stand pressed together and sweating in the Riviera sun at midday because a screening starts forty minutes late for no announced reason. A big artificial ficus tree was overturned in the crush at the door of one screening this morning. Herd instinct kicks in and lines are crossed. Three films today are apt expressions of crossing lines and flouting norms.

The satirically distorted worldview of director Yorgos Lanthimos began altering the cinematic landscape in his native Greece with taboo-breaking films including Oscar-nominated “Dogtooth,” which also scored two A Certain Regard awards at Cannes. By the time he made the Cannes jury prize-winner “The Lobster,” also nominated for an Oscar as well as a Golden Globe, he had become a fully international director. His new competition film “The Killing of a Sacred Deer” is technically an Irish production shot in Cincinnati, starring Colin Farrell and Nicole Kidman.

In “The Lobster,” Farrell played a clueless innocent in a harsh reeducation camp for romantic losers. In “The Killing of a Sacred Deer,” a heavily-bearded Farrell plays a cardiac surgeon and uptight family man. He and wife Anna (Kidman) have sex when she arranges herself in the “general anesthetic” pose. He has no innocence to lose in paying a debt from his professional past. The price turns out to be hefty.

Typical of Lanthimos’ work, the acting is stylized. Farrell’s Dr. Steven Murphy speaks his dialogue in a clipped, mechanical manner, while other characters, including Anna, speak with normal expression but still adhere to a measured, ritualized delivery. Steven has taken a special interest in Martin (Barry Keoghan), a 16-year-old boy who has recently lost his father, one of Steven’s patients. They meet secretly and often for a puzzling and awkward exchange of pleasantries. The doctor gifts Martin with an expensive watch and invites him to come to his home to meet Anna and his two adolescent kids, Kim and Bob. Martin reciprocates the next day and invites Martin home to meet his mother (Alicia Silverstone).

Everything is more than a little off-kilter in this world. By putting the subjects of conversations and many actions absurdly outside of the social norm, Lanthimos succeeds in creating a sense of unease in the viewer, and in making banal content feel forbidden. There are obsessive, repetitive discussions of trivialities like the preferred sort of watchband, or the appropriate quantity of body hair.

When Kim and Bob are suddenly stricken with a psychosomatic-seeming malady that leaves them both paralyzed from the waist down, Steven demands that his son get up and walk with the bizarre threat, “I will take my electric razor, shave your head, and make you eat your hair.” Martin is the author of Kim’s and Bob’s illness, and he outlines to Steven the worsening stages set to follow, including bleeding eyes and death. This is payback for a blunder on Steven’s part, according to the completely arbitrary rules of revenge and justice that exist in a Lanthimos film. A blood sacrifice is required.

In the most perverse sense, Lanthimos films are comedies. In his films, laughter is generated by the transgression of the rules of behavior, language, and custom. An off-the-wall disregard for any norms results in a crazily absurd world where everything is backwards. Funny-strange becomes funny. In that way, Lanthimos violates his own cockeyed rules with “The Killing of a Sacred Deer.” It’s a far grimmer film than he has made in the past, with the heaviness of torture and violence. Just when you think he’s gone the limit with violations, he steps over one more line. 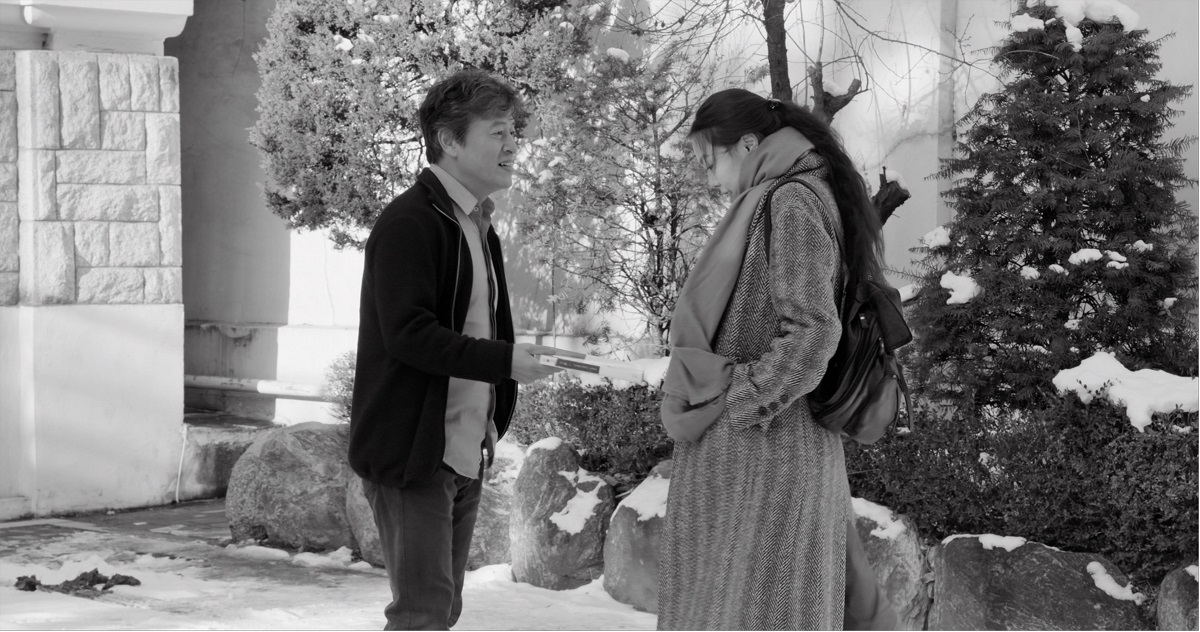 Prolific Korean director Hong Sangsoo, a School of the Art Institute of Chicago graduate, has 21 feature films to his credit, and is a Cannes veteran. This is his eighth trip to the festival, with “The Day After” in competition, and “Claire’s Camera” in a special screening. He was in competition in 2008 with “In Another Country,” starring Isabelle Huppert; in 2012 with “Tale of Cinema;” and in 2004 with “Woman Is the Future of Man.” He’s also had four films selected for A Certain Regard over the years.

Hong Sangsoo’s films inevitably treat variations on romantic obsession and self-delusion in relation to love, most often complicated by misunderstandings and missed connections, and delivered with irony and a sly sense of humor. His films are playful yet rigorous. “The Day After,” shot in black-and-white, constructs one complicated day in the life of Bongwan (Kwon Haehyo), a book publisher having an extramarital affair, and Areum (Kim Minhee), the woman who is his newly-hired employee.

Middle-aged Bongwan’s wife confronts her husband across the breakfast table to air her suspicions that he has a girlfriend on the side. He leaves for work at a pre-dawn hour, recalling his ex-lover in flashback. Hong presents a lovely look at empty Seoul streets in the winter darkness, one of the film’s rare acknowledgements of the landscape. The new employee has already arrived, and Bongwan sits her down for friendly but unusually detailed questions about her living arrangements, her writing ambitions, and her family.

It’s not long before the wife, in an agitated state, shows up while Areum is alone in the office. Mistaking her for her husband’s lover, she hauls off and slaps her face and begins beating her. Later, Bongwan takes Areum to lunch to apologize. He chummily suggests that they should be on a first-name basis, and when she asks what to call him, he replies, “You can call me Boss.” Hong films their lunch, which includes a long philosophical discussion, by panning back and forth between the two, a method that will characterize many of the film’s other face-to-face conversations, and imbue them with an intimate inquisitive quality.

“The Day After” has a cyclical construction, bookended by winter snow and the arrival and departure of Areum. In flashback, the lover Changsook (Kim Saebyuk) is seen bawling loudly mid-breakup, snot dripping from her nose. On the fateful day in question, she returns to the office after what has been a month’s hiatus, and Areum is given the boot. There is irony and subtle farce in Areum’s own return for a visit some time later, when in the course of a conversation she begins to realize that Bongwan does not recognize her. 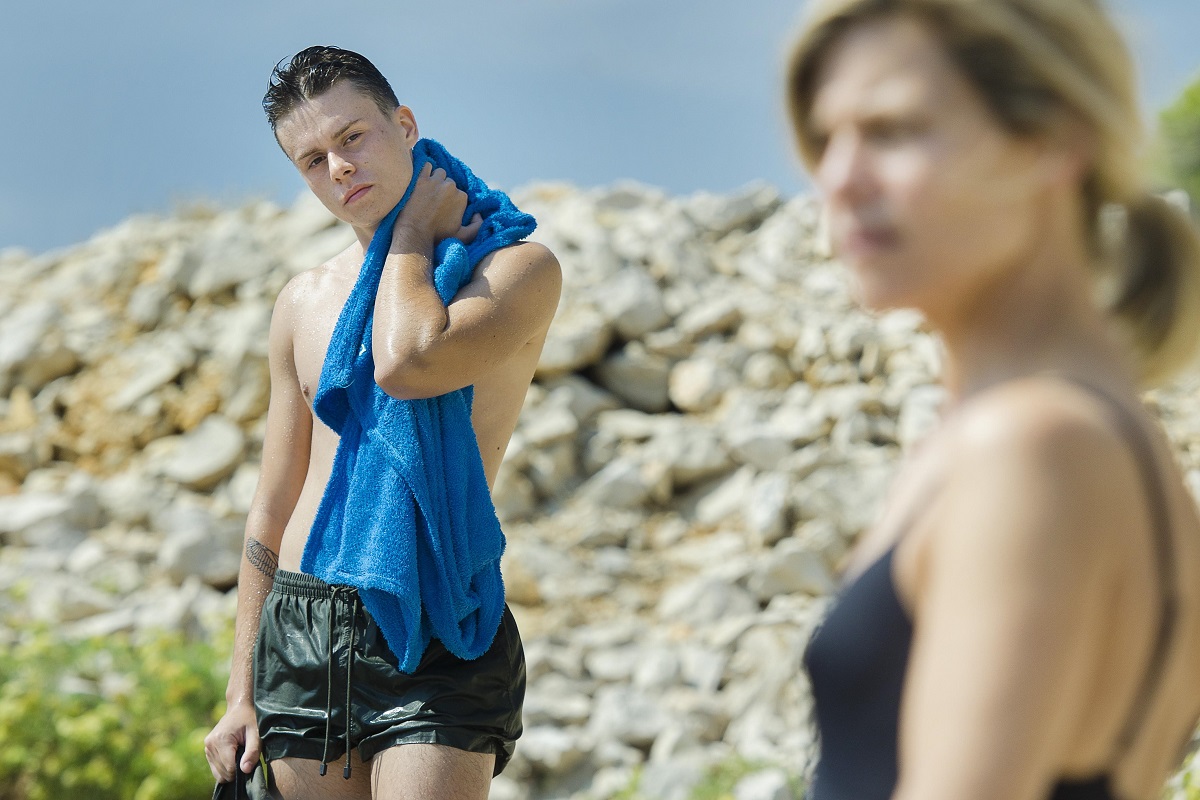 French director Laurent Cantet, winner of the Palme d’Or in 2008 for “The Class,” premieres his “The Workshop” in Un Certain Regard. Like “The Class,” this new film is co-written by Robin Campillo, who is also the director of “20 Beats per Minute” screening in competition. Campillo’s hand is more than evident in the structure of “The Workshop,” which devotes its first hour to the nitty-gritty discussions that take place in a government job center writing workshop for unemployed youth. The second half develops the adversarial relationship between one student, Antoine (Matthieu Lucci), and the moderator Olivia (Marina Fois), a famous crime novelist.

The French appear to have a much greater appetite for this kind of discussion-based cinema that airs social problems than do American audiences. From mediocre films like “Standing Tall” by Emanuelle Bercot, the 2015 lackluster Cannes opener, to an exceptional film like “The Measure of a Man” by Stephane Brize, there are quite a few recent productions that dwell to lesser or greater extent on politically-oriented debates and self-help workshops.

A skeptical handful of ethnically diverse young people in a rundown south of France city gather for the first meeting of Olivia’s workshop, with the mission of brainstorming ideas in order to group-write a thriller. It’s evident from the start that Antoine is a troublemaker who espouses white supremacist ideas and continually baits the black and Muslim members of the group. His own writing exercises run to extreme violence and terrorist murders committed by a fictional hero.

“The Workshop” is meant to evolve into a thriller in its own right when Olivia becomes fascinated with Antoine as a potential research source for her own stalled writing, and he begins stalking her and kidnaps her at gunpoint. This is too little too late, because the discussions of racism and unemployment, an illustrative tour of a shuttered boatyard and its history of worker activism, plus fictional video clips of members of a right-wing group engaging in target practice and spying on a refugee trailer encampment brand the film overwhelmingly as a socially-conscious exercise.