The original title of “Standing Tall,” an inside look at France’s enlightened treatment of disadvantaged at-risk youths, directed and co-written by Emmanuelle Bercot, is ”La Tête Haute”—or “The High Head” in English.

But it could just as well have been called “La Tête Chaude” or “The Hot Head.” That description pretty much sums up the dominant personality trait displayed by Malony, the powder keg of a fatherless boy at the center of this overly earnest, snail-paced drama that pays tribute to the unflagging dedication of social workers who deal with such situations in Bercot’s homeland.

Earnest can mean serious and sincere. But, in this case, it too often means repetitive and plodding. Bercot strives for naturalism in her approach and settings, including the use of a handheld camera. But her narrative is propelled more by procedural moments than the actual act of experiencing life itself.

The only time that Malony easily summons any semblance of audience sympathy is when we first meet him as an apprehensive, tow-headed toddler. The lad is saddled with a nightmare of a woe-is-me single mother (Sara Forestier), whose defining feature is a mouthful of rotting enamel. She is barely capable of taking care of herself, let alone a child and his squalling infant brother. She declares her older son “a monster” and dumps him in the lap of a stern yet caring juvenile judge (Catherine Deneuve, the lone source of star power as she presides over the film from behind an office desk like a Buddha with blond highlights).

A decade or so passes before we encounter Malony again, and given his penchant for reckless joy-riding in stolen vehicles while blaring hip-hop music and serial hostile encounters, he is clearly trying his darnedest to match his mother’s description of him as a tot.

This skinny petulant punk (now played by Rod Paradot, a carpentry student discovered by Bercot), whose smirksome grin and lizard-like eyes are often hidden under a trucker’s cap or a hoodie, has spent the intervening years avoiding school and wandering the streets while being bounced around foster homes and juvenile facilities.  Yet Deneuve’s magistrate and her staff somehow see potential in Malony despite his disrespectful attitude towards authority figures, short attention span, lack of initiative save for caging free “smokes” and violent outbursts.

After attacking a burly counselor, he gets a more soulful, sad-eyed replacement (Benoît Magimel), who exhibits signs of having overcome his own wayward past. He is determined to keep Malony on a steady path after he is arrested for a carjacking. Instead of prison, he is sent to a work center located on a scenic swath of farmland. There he meets a tomboyish girl (Diane Rouxel) who only slightly softens his hard exterior. Six months later, some progress has been made, but this impulsive man-child given to sudden crying jags is too old to start over in school and too unskilled to make a living. Matters get much worse for Malony before they get better, with at least two highly predictable plot detours that set up the somewhat open-ended, mildly happy conclusion.

The risk that Bercot took by choosing an untested actor as her protagonist pays off with a performance of raw immediacy. And it might be considered brave of her to eschew any attempt to dissect Maloney’s interior life onscreen. The psychological reasons for his behavior are apparently beside the point. What is the point, it seems, is the system in place to help him. But there are consequences involved in such a distancing approach. Instead of drawing the viewer in, we are left on the outside staring through an opaque barrier that blocks our natural inclination to care about Malony. That leaves a gaping hole where the film’s heart should be.

The last time I witnessed such an unrepentant anti-social and repellent character in a film about a youthful hooligan might have been “A Clockwork Orange," with Malcolm McDowell as Alex. (Classical music comes into play here as it does in Stanley Kubrick’s 1971 dystopian ode to ultra-violence: Franz Schubert’s familiar Trio No. 2 in E-Flat opus 100, propelled by a mournful piano and violins, helps set a downbeat mood from time to time.)

But at least Alex possessed charismatic swagger and a sick sense of humor to keep matters interesting. “Standing Tall,” on the other hand, simply falls short. 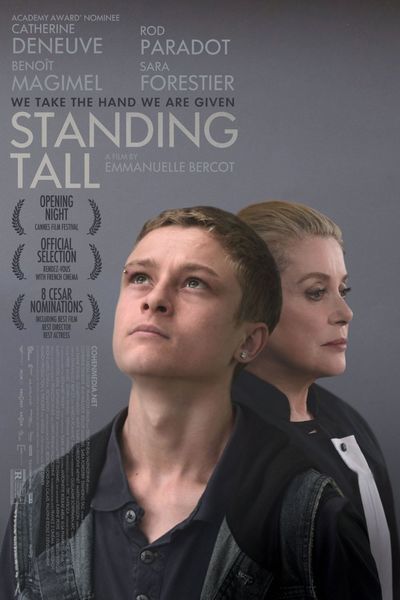 Rated R for strong language and some sexual content.