The Measure of a Man

When we first meet the central character of "The Measure of a Man," he is in the middle of a training session at a local job center—clearly not the first—and it is not going well. On the recommendation of his counselor, he has spent several months taking a course in operating a construction crane, but, now that it is over, he has discovered that there are hardly any openings out there for people with that skill and the few that are will not hire anyone who does not already have practical experience in the field. Yes, he was paid while taking the course but since nothing will possibly come of it, it has all been a waste of time that is even harder to take now that his unemployment benefits have dwindled to 500 euros a month. All the counselor can do in response is blandly state that perhaps it was a mistake to take that course, even though it was his office—perhaps even him specifically—who sent him out, despite presumably knowing the paucity of such jobs. As the meeting goes on and on, we feel both the man's entirely justified outrage and, more importantly, his acute sense of embarrassment and humiliation at being placed in such a position in the first place. When he finally leaves, we get the sense that he will do almost anything in his power to avoid going through that again and this low-key but ultimately spellbinding drama illustrates just how much he is or isn't willing to compromise his ideals in the name of a much-needed paycheck.

The man is Thierry Taugourdeau (Vincent Lindon) and it has been a little more than a year since he was among 700 factory workers that were abruptly laid off. For the time being, he has been able to utilize his savings to keep things going for him, his wife (Karine de Mirbeck) and their teenaged special needs son (Matthieu Schaller), but with that resource beginning to dry up and with a mortgage due and college payments on the horizon, things are getting tight. Thierry has been doing everything in his power to land a job but that has so far resulted in nothing but increasingly fruitless meetings with counsellors who advise him on how to gussy up his resume and potential employers who string him along even though there is little chance that they might seriously consider hiring a 51-year-old man. (In one of the most cringe-inducing scenes in a film filled with them, he does a long job interview via Skype with an unseen functionary who starts off with bland pleasantries and mild hopefulness before critiquing his resume and finally admitting that there is virtually no way that he will be picked for the position.) And yet, Thierry maintains a certain pride and unwillingness to settle for too little—at one point, he and his wife are about to sell the mobile home they purchased in better days, but when the prospective buyer tries to exploit the situation to knock more off of the agreed-upon price, he calls the whole deal off.

Then, a miracle happens and Thierry gets a job working as a security agent for a megastore—one of the guys tasked with nabbing shoplifters and taking them to the dreaded back room so that they can either pay up or wait for the police to come. It may not be exactly the kind of job that he was looking for but he is good at it, and when he and a colleague get to bust an obnoxious punk who tries to steal a phone charger—one that, to judge by his appearance, he could presumably afford—you can feel his sense of satisfaction. As time goes on, however, he begins to realize that things are not so clear-cut and that in some cases, such as an older man who gets caught trying to steal some meat and admits that he has no money to pay for it nor any friends or family he can ask to help him out, he is busting people who are in a situation not unlike the one he just left in the name of the corporate mindset that was responsible for his own job loss. Things get even dicier when he discovers that his job includes busting his fellow workers for their own minor-league infractions—one keeps some coupons for her own use instead of destroying them and another puts the "loyalty" points accrued by customers who are not part of the program on her own card—and he is forced to examine how far down he is willing to go to avoid returning to those horrible meetings and interviews.

At first glance, "The Measure of a Man" may remind some viewers of "Two Days, One Night," the extraordinary film by the Dardenne Brothers that followed a recently laid off factory worker as she begged her co-workers to voluntarily give up their bonuses in order to allow her to be rehired. However, while the film does have some superficial similarities, such as the way that it surrounds its central performer with a cast consisting largely of non-professionals, director/co-writer Stephane Brize has a few curve balls in store. Utilizing a number of scenes employing long takes, he forces viewers to really feel the discomfort and embarrassment that Thierry is enduring, both in the early scenes when he is desperate for any kind of work and in the later ones when he realizes what he is being asked to do for his paycheck. By switching things up from Thierry's job hunt to his work at the store, Brize transforms his film from a painfully acute docudrama to a morality play that is all the more effective for the ways in which it doesn't go for easy melodrama. The end result is a film that may not exactly be filled with laughs (other than a few of the extremely dark variety) but is nevertheless engrossing.

One other area in which "The Measure of a Man" is similar to "Two Days, One Night" is that it does for Vincent Lindon what that film did for Marion Cotillard by providing one of France's great actors with a showcase for their uncommon gifts. On screen for virtually every moment of the film's running time, Lindon, who won the Best Actor award at the Cannes Film Festival for his work, is nothing less than mesmerizing. Although he keeps over-emoting to a bare minimum, he is able to convey more true feelings with his hangdog expression than most other actors could pull off displaying the full cornucopia of emotions. "The Measure of a Man" may be a hard film to watch at times, but with Lindon's great performance at its center, it is one from which you cannot look away. 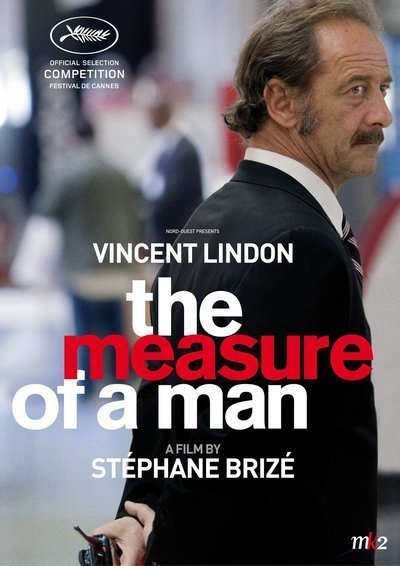