“The Beguiled” by Sofia Coppola (the Oscar-winning “Lost in Translation") kicks off today’s competition screenings in Cannes with a film that is not a remake of the 1971 Clint Eastwood vehicle directed by Don Siegel, but a reinterpretation of Thomas Cullinan’s Civil War-era novel from a female perspective. Nicole Kidman stars as Miss Martha Farnsworth, the head mistress of a very proper Southern finishing school for young ladies. Kirsten Dunst is Miss Edwina Morrow, French teacher to the clutch of five girls stranded at the Virginia school by the war.

Where Siegel’s “The Beguiled” was a manly man’s action film rife with female hysteria, and notable for the subjugation of lonely, sex-crazed women by a macho hero, followed by one frustrated woman’s revenge, Coppola’s “The Beguiled” is a thoughtfully unfolding drama that brings the vulnerability of women alone into conflict with the helplessness of a dying deserter found in the woods with a leg full of shrapnel. Union soldier Corporal John McBurney (Colin Farrell), is technically the enemy, a feared and hated “blue-belly.”

As Coppola develops the opposing forces, McBurney is an unthreatening convalescent, grateful, mild-mannered and gentle in the presence of his unwilling hosts. He’s more victim of circumstance than aggressor, an Irish immigrant who was paid $300 to take another man’s place in the army. The girls are giggly and curious, befitting their ages, and, in the case of slightly older Alicia (Elle Fanning), lit up by a sheltered adolescent’s desire to get closer. Martha is stern and proper, torn between Southern loyalty and her faith’s challenge to render Christian charity.

The somewhat mysterious Edwina is the focus of McBurney’s special attention. Her jaw is permanently locked in unhappy resolve, and her mouth set in a thin line, but an understanding develops between the two. As McBurney heals and shows hearty good will in helping with the heavy outdoor work. The girls compete to help him, and Martha enjoys interludes of stilted conversation with him over an evening glass of wine. The novelty of a formal dinner with the prisoner as guest is the occasion for the women and girls to dress as if they were going to a ball.

Rivalry for this lone man will put an end to the delicately balanced idyll that has grown from tentative mutual respect. It all goes wrong in a tragic melee that starts with sex, and breaks unspoken promises. Coppola doesn’t create any monsters in “The Beguiled,” nor does she present women as hormonal crazies.  McBurney becomes the enemy that he was assumed to be at the start, the women his resourceful adversaries, not helpless victims.

“The Beguiled” features exquisite photography, and its authentic 1860s setting is a history buff’s delight. The smoke of the nearby battlefields drifts among moss-draped trees like the more benign smoke of autumn leaf fires. Tension is low-key and builds slowly in a treatment that avoids gratuitous flourishes, and yet there is little organic flow to the drama and little sense of cohesion among the characters.

Dramatic proximity of the right ingredients is often standing in for chemistry in “The Beguiled,” a drawback also evident in Coppola’s “Marie Antoinette” and “The Bling Ring.” A welcome woman’s point of view is evident in the way she sees normalcy in the girls’ childish rivalries, or in the affectionate warmth of scenes like one in which they sing for McBurney, their girlish voices high and unpracticed. Yet, she is not a great director of women. Kidman especially never seems to fully inhabit her character. Her by-the-numbers performance substitutes an exaggerated physical rigidity for a more convincing evocation of Miss Farnsworth’s moral uprightness.

Today’s competition presented the Russian film “A Gentle Creature” by Sergei Loznitsa (“In the Fog,” “My Joy”). This is one of the festival’s most mind-boggling selections, rowdy, sprawling, bitter, and with a black-humorous fantasy sequence followed by an extended rape. Loznitsa takes the title from a Dostoevsky story, although the actual content of his story is quite different.

“A Gentle Creature” follows a determined woman from a remote rural area in her odyssey to a prison town in a futile attempt to visit her husband, serving a sentence for a crime he didn’t commit. The trip becomes increasingly surreal, as she appears to be the only normal person in a rogues’ gallery of grotesque faces and even more grotesque bodies and absurd actions. A train passenger belts out operatic folksongs. In a search for contraband, a gleeful prison guard rips to shreds a pair of shoes meant for a prisoner, renders food items inedible, and snaps each cigarette in half. Overheard snatches of conversations detail suicides, drug deals, sex, and a broad spectrum of complaints against the system.

Loznitsa invents new circles of hell for his naïve heroine, who ignores every clue where danger lurks. Outside the prison, a local woman offers her a place to stay, where it turns out an all-night bacchanal is in progress, involving very fat, very drunk guests playing spin-the-bottle and singing lustily. Meanwhile, the helpful hostess has sold her new guest to a pimp, and advised her to trust him. She does. He takes her for an audience with a gangster, who relates an unfinished story about a soldier who recognizes his sweetheart’s severed hand in a crematorium.

After several attempts, it seems that this unfortunate woman will succeed in getting to the train station safely for a return home. A fearsome hag, like a witch out of Macbeth, warns her not to fall asleep or she’ll be taken away. The ensuing dream sequence begins as the film’s magic-realist relief and a touch of almost Kaurismaki-like humor. Like almost everything else in this film, the trip to a fairytale cottage in a horse-drawn carriage goes from dream to bureaucratic nonsense to true nightmare.

This monumental epic of despair has no true resolution. It’s two hours and 23 minutes long, with the sense that the torture of its heroine, and by implication the Russian people, will go on forever. 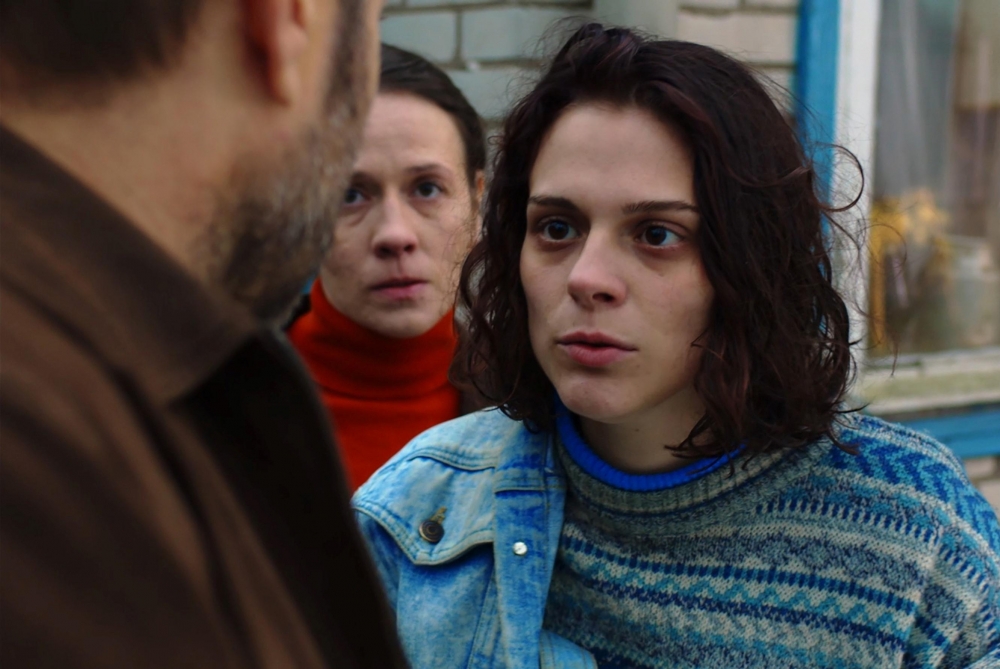 The A Certain Regard sidebar also premiered a Russian film, “Closeness” by Kantemir Balagov, a film eligible for the Camera d’Or, a prize awarded for first or second feature. Set in the director’s hometown of Nalchik in the North Caucasus in 1998, the story deals with ethnic and religious rivalries as a brother and sister come of age in the town’s small Jewish community.

Director Balagov makes a promising start, introducing his wild-child protagonist Ilana (Darya Zhovner), a tomboyish young adult who defies convention by working as a mechanic in her father’s garage, and worries her parents by having midnight trysts with a non-Jewish guy who pumps gas for a living. Ila and her brother David (Veniamin Kats) have an easy relationship so physically intimate as to suggest incest.

Friends and neighbors gather for a dinner to announce David’s engagement to his girlfriend, but the couple is kidnapped later that night and a ransom demand is sent to his parents. The Jewish community rallies briefly at the tiny synagogue, but resentments surface, excuses and financial problems are aired, and the full amount of cash cannot be raised.

So far so good, in a film that evokes the backwater culture of a town far from any urban center, where anti-Semitism is an understood norm. When Ila’s mother suggests that they (the Jews) have to watch their step because they are guests in the town, Ila responds bitterly, “Aren’t we guests everywhere?” When she speaks up to defend her family in a private meeting about the money with a community elder, her mother slaps face and drags her out, surfacing yet another layer in the film’s portrayal of oppression.

Balagov sets “Closeness” going in many directions to the point that the thrust of the story becomes muddled. The love that Ila’s parents initially showed her dissolves when the overwhelming primacy of the son comes to the fore. Ila’s love for her brother begins to seem a sham following actions in the wake of her own slight.  Ila’s boyfriend and his buddies watch anti-Semitic Islamist videos on late-night TV, opening yet another line of possibilities. The director ultimately undercuts his own work by concluding with a text on the screen that essentially tosses away these characters and their story.