It’s cold in Berlin. “The Dinner,” which premiered in competition at the 67th Berlinale this week, might be the chilliest portrait of family tensions I’ve seen in years. The main narrative thrust of Oren Moverman’s fourth feature—already the third film adaptation of Dutch author Herman Koch’s 2009 bestseller—takes place across a single, snow-blanketed evening that’s fated to leave one, or one family, searching for warmth in the dark.

Stan (Richard Gere), a U.S. Congressman campaigning to be Governor, has invited his brother Paul (Steve Coogan) and sister-in-law Claire (Laura Linney) to dine with him and his wife Kate (Rebecca Hall) at a high-end restaurant—the prospect of which is causing Paul a great deal of dread. “It’s like going to France,” Claire tries to tell him, to which he glumly responds: “During the German occupation.” As a history teacher, Paul would know; as a self-described “warrior of the underclass” with a love of Gettysburg and the Ancient Greeks, he has little time for his brother’s dining choice. The “garden of young vegetables” served upon arrival provokes not so much bemusement in Paul as disgust—and, worse for him, there are several more courses to come.

That these increasingly elaborate servings are marked by onscreen text lends a structural rhythm to Moverman’s two-hour film—but the fluctuations in table manners are developed mostly by means of flashbacks. Through these, we come to learn that Stan has proposed the dinner in order to address a simmering crisis: both couples’ teenage sons were recently responsible for the legally unsolved death of a homeless woman. Unpacking the emotional and moral cost of that incident, as in Polanski’s “Carnage” adaptation, reveals the colliding interests of these noxiously self-centered adults. Most significantly, we discover that Paul suffered a mental breakdown some time ago; in the present-day scenes, he’s merely bad-tempered.

Much like the dishes proudly described to the couples by headwaiter Heinz (Michael Chernus), there’s a bizarrely overcooked pile-up of information here. The flashbacks allow everything to be framed as a mystery, from the way in which gnomic references to a tragedy in early dialogue exchanges later come to light, to how Moverman shoots particular scenes—such as when he refuses to show us the domestic clutter that characters are having to step over when Paul, in flashback, has a breakdown (and is thus, of course, unable to tidy his home). As if to heighten our sense of disorientation, the director keeps his camera constantly moving, with zooms and pans providing a kind of dramatic maximalism that stifles any would-be connection to the characters. Similarly, barely a line of dialogue is delivered without some kind of interruption: this is a film in which people talk over one another and actively choose not to listen.

Affluenza is a burden. Rich folk, Moverman reminds us, have it as hard as anyone. But the problem for me is neither the exclusively middle-class milieu nor the wholesale unsympathetic characters. Some questionable choices aside (is the opening reveal, that the dodgy American accent narrating the film belongs to Coogan, intended as a gag?), “The Dinner” is undone by its incredible central premise. Forgiving the disastrously handled scene involving the two kids and the aforementioned homeless woman is one thing, but why has a high-profile politician chosen to resolve a scandalous family crisis in such an inescapably public environment? 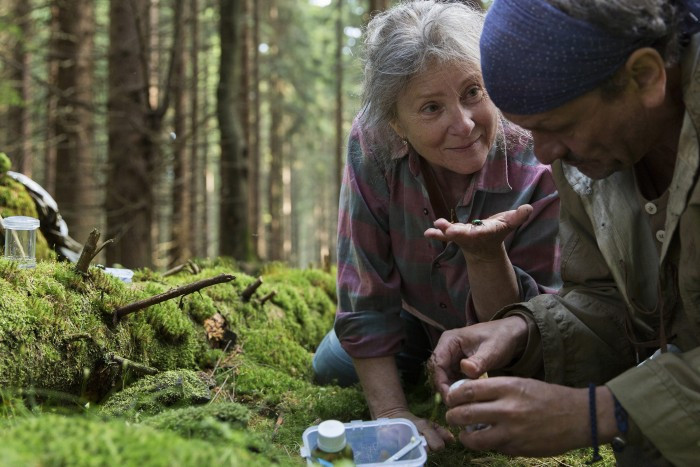 “Spoor,” Agnieszka Holland’s own competition entry—and the Polish veteran’s first feature since the Oscar-nominated “In Darkness” (2011)—plays similarly loose with plausible narrative, though in much more knowing fashion. Co-written by Olga Tokarczuk and adapted from the latter’s novel Drive Your Plough Over the Bones of the Dead, Holland’s latest film slickly combines crime mystery with eco thriller set against the fog-cloaked hills of Lower Silesia—not too far from the Czech border.

The landscape, to begin with, is bleak and unforgiving. When her two beloved dogs go missing in the harsh winter, part-time English teacher and animal lover Janina Duszejko (Agnieszka Mandat-Grabka) goes to the authorities to accuse local poachers. Neither the police force nor the local priest, however, are willing to help. “Never refer to dogs as your daughters,” advises the latter. “God made animals subject to man.” With tacit support from such political institutions, hunting and its associated cruelties are accepted and ingrained in the regional culture—but when humans also begin to disappear (and later turn up dead), rumors spread and suspicions deepen.

Life goes on. As in “The Dinner,” Holland’s film employs a recognizable structuring device, in this instance a seasonal hunting calendar, and unfolds from winter to spring (and so on) as Duszejko—who insists on being called by her surname—befriends and bonds with a number of increasingly important characters: neighbor Matoga (Wiktor Zborowski); Maria (Patrycja Volny), the long-suffering girlfriend of a local gangster; Dyzio (Jakub Gierszal), a blond and bespectacled computer whiz who suffers from epileptic seizures; and Boros (Miroslav Krobot), a Czech man whose research into a specific species of beetle provides a clue as to the build-up of human casualties.

That “Spoor” is limited to its mystery trappings means that, while the sense of a pervasive social backwardness and institutional conservatism are well articulated, the more menacing aspects of its plot never fully materialize. As one character’s villainous credentials are signposted by close-ups of his cowboy boots and an inexplicable sequence in which he beats caged foxes, the film’s cartoonish qualities take hold. (One verbal gag, referencing the director’s recent foray into directing on television shows such as “The Wire” and "House of Cards," sees a prosecutor arrive at the scene of a murder and warn: “Never tamper with a crime scene! Haven’t you seen TV?”) In its latter stages, the film drifts into an unashamedly explosive action thriller—and some tech gadget wizardry straight out of a James Bond picture.

If Moverman’s film is about an actual family coming unstuck, Holland’s ultimately depicts a unit of inter-generational people coming together, in solidarity, as Duszejko and her motley crew pool their resources against the town’s corrupt infrastructure. It's a generally agreeable sentiment in what is only a vaguely allegorical film. 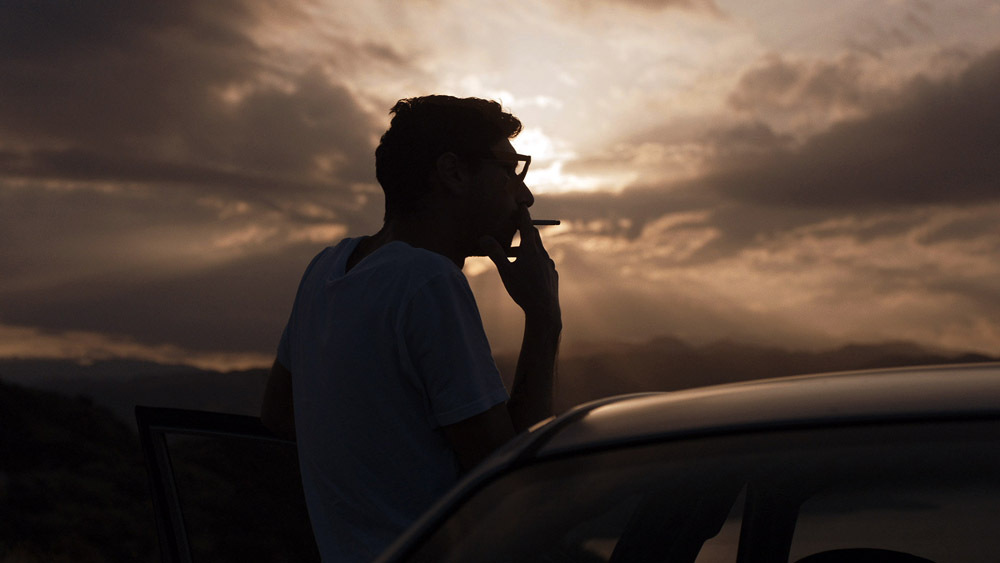 Family ties also form a key thematic thread in one of the better films I’ve seen in Berlin this week: Mike Ott’s “California Dreams,” which premiered in a cinema north of the River Spree as part of Critics Week, which is hosting its third edition during this year’s festival. Ott’s film opens with a series of frontally framed, fourth-wall-breaking auditions by an assemblage of hopeful actors and/or writers performing monologues from their favorite movies—“The Outsiders,” “Forrest Gump,” “Punch-Drunk Love”—and proceeds thereafter as a docu-comic essay on the nature of performance and the unique character of the Californian landscape.

This is not, however, the bustling glitz of the Golden State with which most cinephiles are acquainted, but those less charted terrains—mostly in Lancaster—whose energies Ott has been documenting for more than a decade. The mise-en-scene here, gorgeously snapped by regular cinematographer Mike Gioulakis (who also shot “It Follows”), is so vividly crisp and distinct in its coloring that it looks stereoscopic at times. The sublimity of the natural landscape is countered by the quotidian unpleasantness of lower-rung reality: Ott’s band of outsiders grind out a living working in the likes of Six Flags and Wendy’s and All Locked Up—or else are homeless and/or unemployed.

The troubled but infectiously unpretentious heart of “California Dreams” is Cory (Cory Zacharia), whose naïve hopes of flying to Berlin for a film audition are kept in check by his brutally skeptical mother. Cory’s scenes with Mom form an ongoing and amusing subplot that is punctuated by semi-improvised sequences, in which our protagonist interviews his fellow performers about the minutiae of their mundane lives: sexual histories, burrito addictions, career ambitions. Cory himself is a candid interviewee. His unguarded nature, combined with revelations pertaining to episodes of high school bullying, incest, sexual confusion and a stint in a mental health ward, might prompt lazy criticisms and facile moral presumptions with regard to Ott’s methodologies (see Ryan Gilbey’s assessment here, for instance).

Any charge of irresponsibility directed at Ott fails to fully test or interrogate the obvious observation, here, that any work of art is complex—morally, artistically, emotionally and so on—and it doesn’t acknowledge just how wide those “grey areas” of ethnographic practice are. This, at any rate, is to say nothing of Ott as an image-maker. The director’s control of the many tonal shifts in this experimental film, from the poignant and even unsettling to the weird and borderline slapstick—and his handling of the layered slippages between authenticities in performance—are impressive and endearing. And then there’s the desert, and its dusk skies, and the way those strips of spectral pink hang beneath that sheet of untouched blue.