Strolling down Hollywood Boulevard on the last day of American Film Institute Festival on Thursday, it's hard not to think of that golden guy named Oscar. Faux statues are sold in the shops you pass and you can't help but look down at the names immortalized on the sidewalk in the stars you walk over. The AFI Fest is partially about Oscar buzz, making it and increasing it.

The AFI Media Center where the press can retire to work or nap at the Hollywood Roosevelt Hotel is called the Oscar Room. The hotel was the venue for the first Academy Awards ceremony in 1929 (Blossom ballroom).  The hotel was also recently used as a location for the Academy Award-nominated 2002 "Catch Me If You Can."

The stars who show up at the AFI galas are often scheduled for non-AFI award consideration special events sponsored by their studios. There are dinners and luncheons, post-screening Q&As and interviews.

Some of the foreign movies on the AFI Fest program are their country's official entry into the Academy Awards. In all, 76 films were submitted to the Academy Awards for that category. On Thursday, Italy's submission, Paolo Sorrentino's poignant "The Great Beauty" had its second and last screening at the Egyptian as part of AFI Fest. (The Coen Brothers "Inside Llewyn Davis" was the closing gala movie.)

AFI Fest also gives out its own awards. Director Kim Mordaunt's "The Rocket," Australia's official Oscar submission, won the Audience Choice Award for its category (World Cinema). Filmed in Laos and Thailand and in Laotian with English subtitles, the film is about a boy who bears the stigma of bad luck due to superstition and his desire to win a rocket contest. Mordaunt forces us to view a land and its people damaged by both the Vietnam War and communism.

The British movie, "The Selfish Giant," also had subtitles in case the audience couldn't understand the strong accents in this English-language film. Subtitles won't qualify "The Selfish Giant" for the Foreign Language Film Oscar, but it won a New Auteur Special Award for Direction from the jury and the Audience Award for the New Auteurs category. Director Clio Barnard wrote and directed this story about two young boys  who go to work gathering scrap metal while suspended from school. With the financial pressures on their family, the two friends take sometimes illegal and dangerous actions to rescue their mothers with tragic results.

Three of the five movies that were given awards from the Cannes Festival category, Un Certain Regard, were screened at AFI Fest: "The Missing Picture (L'Image Manquante), "Omar" (which I didn't see)  and "Stranger by the Lake" (L'Inconnu du lac).  "The Missing Picture" is Cambodia's submission to the Academy Awards Foreign Film category and "Omar" is Palestine's first submission in 50 years.

"Stranger by the Lake", set at a cruisy gay nude beach, suggests that the line between feature films and pornography is again being pushed. Despite being a murder mystery fan, I wasn't impressed, but the discomfort of heterosexual men watching the film might be worth noting.

More moving was the Cambodian film. In "The Missing Picture," Rithy Panh takes us through the horrific killing fields of Cambodia by elevating the diorama format to tell us about his life before and during the Khmer Rouge regime. His roughly carved clay figures replace a cast of thousands and are juxtaposed against archival films (mostly in black and white) with narration by Randal Douc.

Other films I found interesting included "My Afghanistan—Life in the Forbidden Zone." This film demonstrated how technology can be used to tell stories about contemporary people living in areas where journalists like director/writer Nagieb Khaja can't go. Using 30 high-definition cellphones, ordinary people tell us about their lives. Even without the Internet and social media, citizens are becoming amateur journalists, giving us a fuller understanding of war in this case. As suggested by the case of WikiLeaks, technology is changing the role of both citizen and journalist as well as the manner in which matters become more transparent. 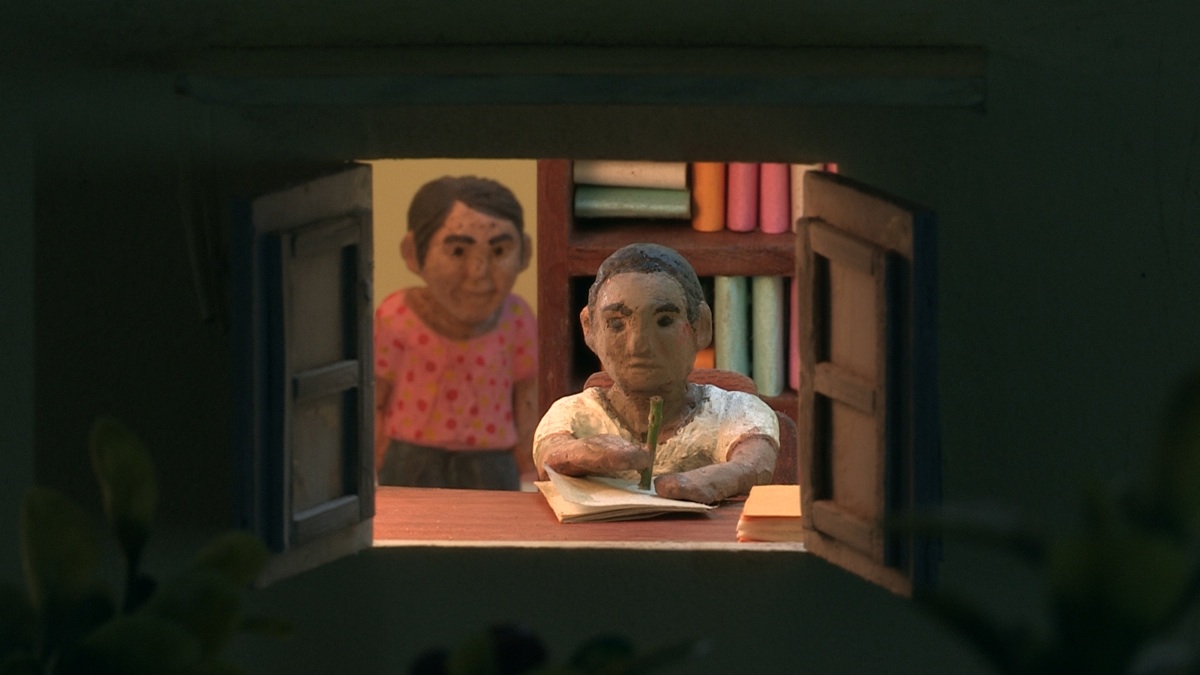 "The Missing Picture" and "My Afghanistan" displayed how a small budget can still have great emotional impact with the right script and good direction.

Lastly, another topic of discussion was sparked by "Charlie Victor Romeo." The movie is not just based on a play, it is presented almost as if it were a play. The script takes almost verbatim the real black box recordings from six separate aircraft incidents. The resulting play presentation has been called a theatrical documentary and was created by Bob Berger, Patrick Daniels and Irving Gregory of the Collective: Unconscious theater company. Berger, Daniels and Karlyn Michelson are credited as the directors of this movie. Outside of the camera angles and closeups, not much takes the movie outside of the small black box theatrical experience.

Some of the criticism about this film has been that it wasn't cinematic enough. Yet outside of festival,  big name theatrical companies such as the Metropolitan Opera and the U.K. National Theatre are regularly making their productions available to moviegoers through live broadcasts and encore performances, some of which are directed and have additional scenes to make the presentation more cinematic (e.g. the Stratford Shakespeare Festival 2010 "The Tempest" with Christopher Plummer).

Many of these recorded performances will find their way on to PBS Great Performances after their brief run in movie theaters.

The National Theatre Live broadcast spokesman Heath Schwartz wrote in an email that the live broadcast of Helen Mirren in "The Audience" was seen by almost 30,000 people in North America and about 80,000 people in the United Kingdom at the time of its initial broadcast. Mirren won an Oscar for her portrayal of Queen Elizabeth II in the 2006 movie "The Queen" and the new play was written by the same person, Peter Morgan, and is about the same Queen Elizabeth.

No doubt that golden guy Oscar had something to do with the creation of this new stage play and maybe even influenced the record audience size.

This year, at AFI Fest, audiences clearly were attracted to movies, "The Rocket" and "The Selfish Giant," that told stories about common people, kids who struggled when the adults around them failed them or even hindered their progress. Will the Oscars as well? And someday will the Oscars give awards to movies made of cellphone videos?