It's not surprising that Japan Society's annual Japan Cuts film program complements, and in many ways takes cues from, the New York Asian Film Festival (NYAFF). Former Japan Society film programmer Samuel Jamier currently works at NYAFF as one of their main programmers—Jamier also programmed Japan Cuts back when Japan Society's survey and NYAFF shared a couple of days of co-programmed titles every year. Still, while Jamier's initiative and eclecticism put Japan Cuts on the map, the festival's line-up has only become bolder in the last three years.

Many of the best titles in this year's slate either concern personal loss, or anti-institutional rebellion. But some, like Closing Night drama "The Actor" [pictured above], are harder to classify. "The Actor" is part-character-study, part-romantic drama. We follow Takuji Kameoka (Ken Yasuda), a hard-working character actor, as he throws himself from one role into another. Each narrative episode—whether it's at a bar or in the midst of acting exercises for a theatrical performance—feels of a piece. Which is to say: viewers dive into the middle of Kameoka's fluid, constantly-changing routine without much explanation of where one performance starts and another begins.

"The Actor" is a bittersweet portrait of an artist working inexhaustible hours at various gigs that require absolute focus, but whose schedule offers no security and precious little down-time with friends and loved ones. Takuji works nights, drinks during the day, drinks on screen, flirts with bartenders off-screen, plays gangsters and samurai, tries his hand at theatrical acting and more, and more. He's constantly auditioning, and therefore constantly willing himself into various roles. Yasuda and director Sakoto Yokohama emphasize Takuji's body language throughout Yasuda's performance. He suggests a lot without giving away too much, and holds your attention throughout, making "The Actor" a low-key festival highlight. ["The Actor" screens Sunday, July 24 at 7:00pm. Click here for more information.] 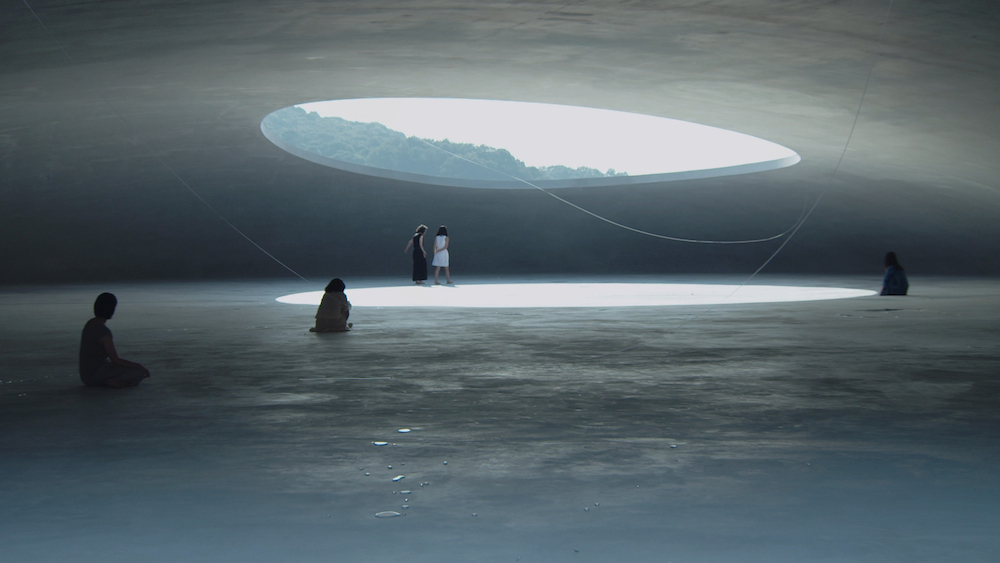 "A Room of Her Own: Rei Naito and Light" [pictured above] similarly rewards patient viewers with an intriguing portrait of a contemplative, elusive artist. Director Yuko Nakamura originally set out to film conceptual artist Naito and her relationship with various art installations like "Matrix," an artificial, cave-like environment where water drops pool together beneath an enormous open-air skylight. But Naito soon withdraws from Nakamura's project, leaving her to figure out how to illustrate her own relationship with Naito's work. Eventually, it becomes clear that Naito's delicacy and Nakamura's indecision are only superficial motivating factors that lead to a richer understanding of Naito's art. Nakamura emphasizes a visual motif of water drops pulling themselves towards each other, and pooling into improbably distended puddles. Eventually, these puddles break up into individual droplets, but they come together again and again. It's a stirring image, and one that speaks volumes to the film's understanding of human interaction, and its meditative resonance in a post-disaster environment. ["A Room of Her Own: Rei Naito and Light" screens Sunday, July 17 at 12:00pm. Click here for more information.] 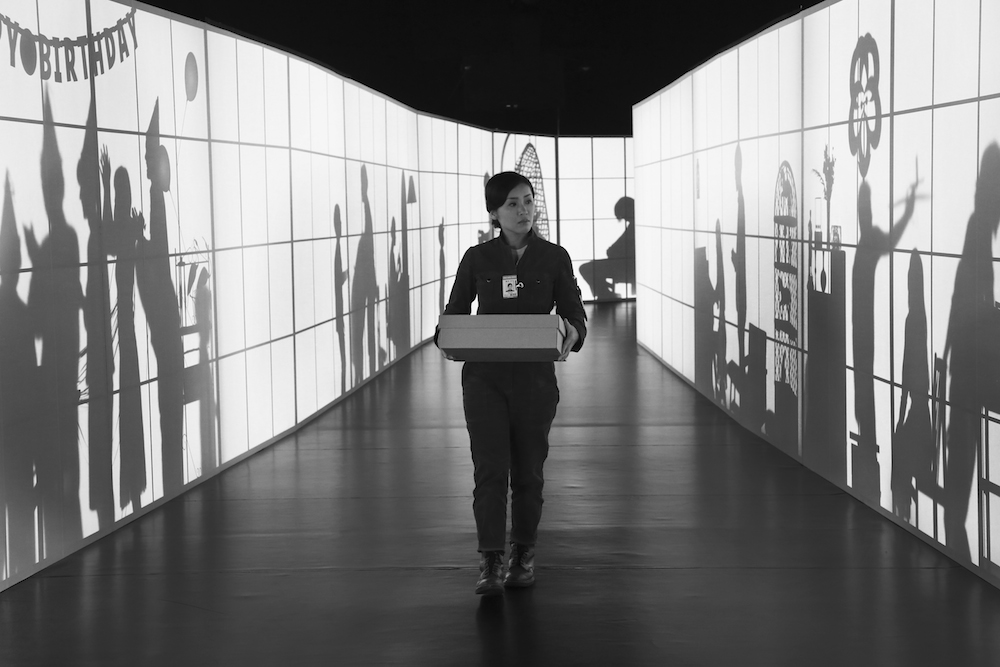 Several other films at this year's program directly address post-Fukushima concerns, particularly Japanese enfant terrible Sion Sono's science-fiction drama "The Whispering Star" [pictured above]. Sono ("Love Exposure," "Why Don't You Play in Hell?") is also the subject of a documentary portrait playing the festival, "The Sion Sono," and has had several films screen at Japan Cuts. "The Whispering Star," however, is unlike any of his other films, as it follows the day-to-day tasks and chores of a robot tasked with delivering parcels to the last remaining human colonies. Sono's film is still very much thematically linked with his post-Fukushima movies, in that it processes anger and loss suffered from a major traumatic event. But "The Whispering Star" is a mournful, hypnotic slice-of-life drama about an essentially alien character, one who is adrift from normalizing every-day experiences.

Yoko (Sono regular Megumi Kagurazaka) cleans and maintains a claustrophobic, storage unit-sized spaceship as it slowly drifts from one human colony to the next. There's nothing to occupy Yoko's time other than the routines she gives herself, like cleaning dead moths from a halogen light fixture, scrubbing the floor, etc. Time as we know it moves quickly throughout "The Whispering Star," as a series of quick-cut intertitles tell us. The days of the week fly by in a single scene, suggesting that Yoko experiences time at a faster rate than we do. Yoko's interactions with other characters—mostly with the radio-shaped artificial intelligence that runs her ship—are negligible since she is off in her own world even when she's not alone. This kind of dream-like atmosphere, and glacial pacing brings to the films of Andrei Tarkovsky, an influence that Sono sometimes overtly tips his hand to (ex: a scene involving a burning match that echoes an iconic sequence from Tarkovsky's "Nostalghia"). Sono's film is like Tarkovsky's earlier masterpieces, encouraging viewers to enter an altered space where plot and narrative rules are in flux. ["The Whispering Star" screens Saturday, July 16 at 4:45pm. Click here for more information.] 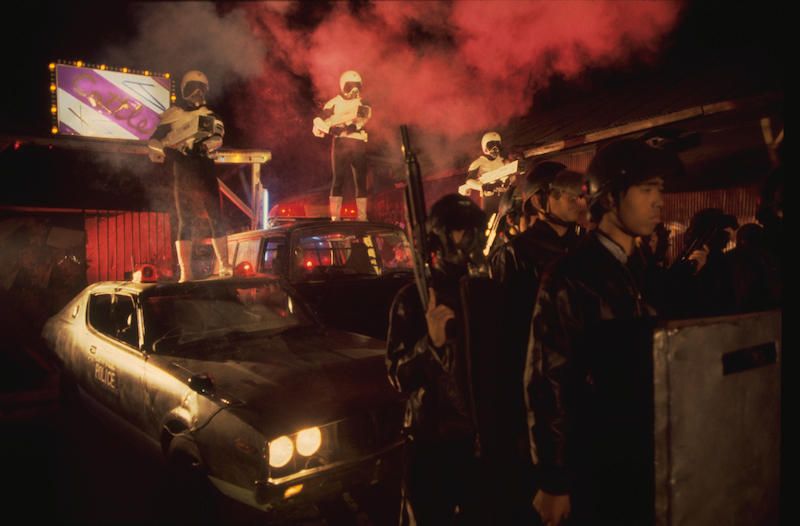 Sono's Tarkovsky influence is striking, but the biggest highlight of this year's festival is another glaring influence: "Burst City" [pictured above], an atmospheric post-apocalyptic punk concert film from 1982. Written and directed by Gakuryu Ishii (also known as: Sogo Ishii), "Burst City" has influenced everything from the Japanese cyberpunk movement of the '80s to Sono's recent hip-hip musical "Tokyo Tribe"—which is curious, since the film barely has a plot. Several punk bands go to war in the shadow of a nuclear power plant's erection. Since this is the not-too-distant future, the cops are armed with Storm Trooper-like weapons. But the punk rock bands and gangs that Ishii champions fight back with loud, feedback-enhanced musical performances.

Ishii ("Electric Dragon 80.000 Volts," "Angel Dust") films his subjects from a variety of angles and locations, including mosh pits, abandoned warehouses, and on-stage with several boisterous, leather- and latex-clad Japanese punks. As a result, Ishii's film follows various different factions, but never settles on any group long enough for them to become distinct. "Burst City" is about a scene, and Ishii captures it with grainy 16mm photography that adds texture to his otherwise loose style. Ishii never seems flustered or unsure of where to film. He has an eye for detail that guides the movie from one scene to another, shifting seamlessly from long takes to tracking shots to hyper-cut concert scenes. Ishii perfectly captures his subjects' prickly, defiant attitude, making "Burst City" a defiant (and still-relevant) reaction to nuclear proliferation. If you see only one movie at this year's festival, "Burst City" should be it. ["Burst City" screens Saturday, July 23 at 10:00pm. Click here for more information.]