Why Don't You Play in Hell?

Powered by JustWatch
"Why Don't You Play in Hell" is a blood-soaked farce about the glory of guerrilla filmmaking: a comedy about a clan of movie brats called "The Fuck Bombers" who insert themselves into a gang war so they can fulfill a high-school pact to create "the greatest movie ever made."  It is also the post-punk writer/director Sion Sono's most accessible film: a middle-aged filmmaker's tribute to the kind of epic-sized gangster-romance he used to fantasize about making.

It all starts with a infectious toothpaste ad starring young Mitsuko (Nanoka Hara), the daughter of a preening mobster named Muto (Jun Kunimura). The impact of Mitsuko's jingle grows in the minds of everyone around her. Ten years after its appearance, everyone in Mitsuko's (now Fumi Nikaido) orbit remembers her for her rousing toothpaste song, including her dad's rival Ikegami (Shinichi Tsutsumi) and her wide-eyed love interest Koji (Gen Hoshino).

But while Mitsuko's ad inspires everyone who sees it, it's only the catalyst that motivates the Bombers to make the deranged movie within Sono's movie. The heroine is important in two ways: as both the movie's lead character, and as a muse inspiring the Bombers and Koji (a dejected film buff) to team up, and enlist Muto and Ikegami in making a bloody action spectacular.

The quality of the Bombers' film is of secondary importance to the at-all-costs energy that leads them to make the film in the first place. They've dreamed of creating a gory action film ever since they were seventeen-year old 35mm fetishists worshipping at the alter of an imaginary Movie God. That dream is realized in a climactic set piece starring legions of "actors" (ie: yakuza thugs) who "really" slaughter each other for their director's pleasure. It's a deliriously cartoon-like orgy of violence that brings to Joe Dante and Tim Burton's grotesque black comedies, the seemingly never-ending climax of "Kill Bill Vol. 1," and Sono's own 1995 Shakespeare-on-speed tragicomedy "Bad Film."

Sono seems to love the fact that the Bombers are brazen and motivated enough to gravitate towards making a really violent entertainment. There are no body doubles in their film, just a lot of guys stabbing and shooting at each other. Think of "Why Don't You Play in Hell" as a "Let's put on a show!" backstage musical, but instead of music, there's gunshots, swordplay, and projectile vomiting.

In its roundabout way, "Why Don't You Play in Hell" has a lot to say about the younger generation's relationship to movie history and technology. It's a movie about kids who fondle hand-held 16mm film cameras, and treasure "real" violence that their own director Sono shot with digital cameras and soaked in computer-generated splatter effects. These kids are seriously naive, and wind up sacrificing everything to get their film made. The film's drama resists death-of-cinema nostalgia by cheering on amateurs who are at once reverential and excited about the past, but also uninterested in self-analysis. The Bombers only know what they like. There's a certain beauty and terror in that, and it makes sense that their muse Mitsuko is beautiful because, and not in spite of, her monstrous narcissism. Koji tellingly falls in love with the heroine when she lazily dangles her spike heel in front of him and distractedly tells him to tie the strap for her. In Sono's eyes, she's a lovely and hysterical monster.

"Hell" is a characteristically slippery mix of naive optimism, and gross-out, midnight-movie humor. It has the dense, novelistic structure of Sono's most elaborate scenarios, but isn't as convoluted as, say, his film "Love Exposure," an four-hour drama about the redeeming spiritual and romantic power of sexual deviancy. It's full of earthy pleasures, and  infectiously charming, in its unrepentantly bratty way. This is an inclusive cult movie that might appeal to both the director's diehard fans and people who've never seen a Sono film. To quote a famous ad for Alka-Seltzer: Try it, you'll like it! 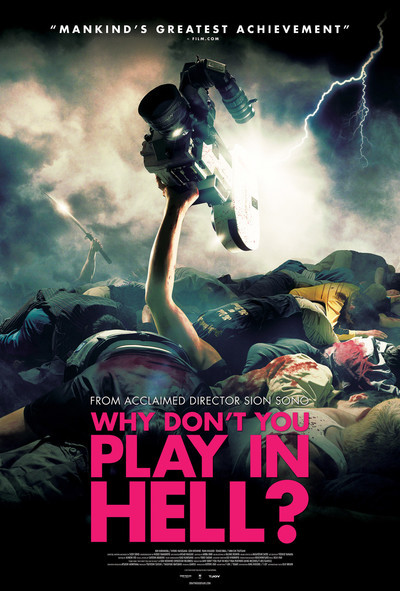