War Machines: Summer Blockbusters, Drones, And The Future Of The Action Hero In An Age Of Robot Warfare

"There is no Starfleet regulation that condemns a man to die without a trial," Spock (Zachary Quinto) tells Captain Kirk (Chris Pine) at the beginning of the second act of this summer's "Star Trek Into Darkness." He is protesting an order from Admiral Marcus (Peter Weller) to take the Enterprise and a load of specially developed missiles, head out after the perpetrator of a terrorist attack who, like NSA leaker Edward Snowden, had skipped out of Federation jurisdiction, "park on the edge of Klingon space, you fire, you take him out, and you haul ass."

That "Star Trek" would return to its franchise roots and discuss a problem that's become the subject of urgent discussion about United States military policy — the extrajudicial killing of suspected terrorists outside American borders — isn't particularly surprising. But "Star Trek Into Darkness" isn't alone: The use of drones, and robots like them for war or for surveillance has turned up as a subject in a surprisingly large number of summer's biggest blockbusters, including "Iron Man 3," "Man Of Steel," and now "Pacific Rim."

It would be easy to dismiss the trend as just another example of Hollywood's liberalism. But there's more at work here than political talking points. Progressive politics may govern how many celebrities vote at the ballot box and with their wallets, but they don't always make it into action movies, which often devolve into celebrations of American military might, aided by liberal use of American military technology. Instead, superheroes and action heroes' relationships to drones is about something rather more self-interested, reaffirming the primacy of man over machine in blockbusters. 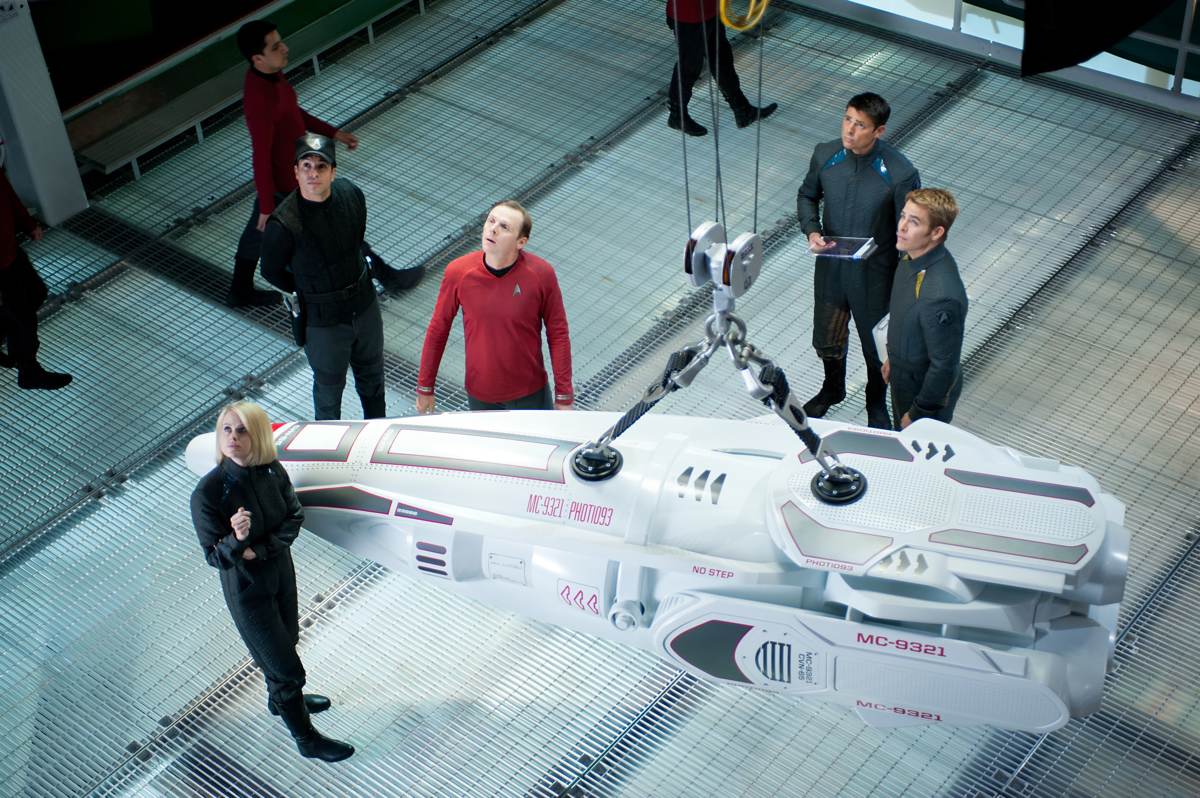 These arguments take different forms in each movies. In "Star Trek Into Darkness," the use of drone-like missiles is presented as primarily an ethical question. Spock's objections to the use of missiles to kill the criminal, who turns out to be a result of genetic engineering named Khan (Benedict Cumberbatch), are both ethical and utilitarian, in addition to rules-based. "Regulations aside, this is morally wrong," he tells Kirk. "Our mission could start a war with the Klingons, and it is, by definition, immoral." Engineer Scotty (
Advertisement
Simon Pegg) brings up reasons of both safety and organizational mission creep. "I cannae authorize any weapon aboard this ship without knowing what's inside them," he explains to Kirk, resigning his commission rather than giving in. "This is clearly a military operation. Is that what we are now? Because I thought we were explorers." Kirk ultimately decides to abide by Starfleet regulations, choosing to capture Khan and take him back to earth for a trial, though mostly because of his chronic discomfort with order-following.

But there are plot-based reasons for the movie's characters to avoid using the missiles in their hold, not just moral ones. If Kirk and company had obeyed orders and clipped Khan from space, they might have a decent setup for a third movie in J.J. Abrams Star Trek trilogy about war with the Klingons, but it would have robbed "Star Trek Into Darkness" of its second two acts and a lot of flashy action sequences. A drone hit on Khan means that Spock, Kirk, and Uhura (Zoe Saldana) never go down to the surface of Klingon, never have a brawl with a bunch of Klingon warriors, never let Khan talk them into discovering Admiral Marcus' devious plan, never flee from Khan through space once they discover his treachery, and never track him down across the ruins of San Francisco when he crash-lands into the city's skyscrapers, cutting through the skyline with murderous indifference. In other words, one robot could have put an awful lot of characters out of a job.

"Iron Man 3" makes a rather different argument. Rather than suggesting we have to pick between men and machines, and arguing that we should pick men for reasons of both morality and excitement, the movie offers up a fantasy combination. Iron Man technology gives America the ability to strike enemy combatants quickly and directly without putting American troops at risk, while also adding human judgement and the ability to reverse a strike to avoid killing innocent civilians.

As Iron Patriot, Col. James Rhodes (Don Cheadle) frequently finds himself doing the most good when he's sent out to hunt for a terrorist called the Mandarin (Ben Kingsley) by not pulling the trigger. He calls off one mission when finds himself in a room full of terrified and obviously innocent men, and another when the location he's sent to hit turns out to be a sweatshop. "Unless the Mandarin's next attack on the U.S. involves cheaply made sportswear, I think you messed up again," he radios back to his superiors, clearly irritated. But the movie doesn't question the need for the strikes: "They need to look strong," Rhodes tells Tony Stark (Robert Downey Jr.), saying that the federal government needs to be seen to be responding to terrorism forcefully after the alien attack on New York. 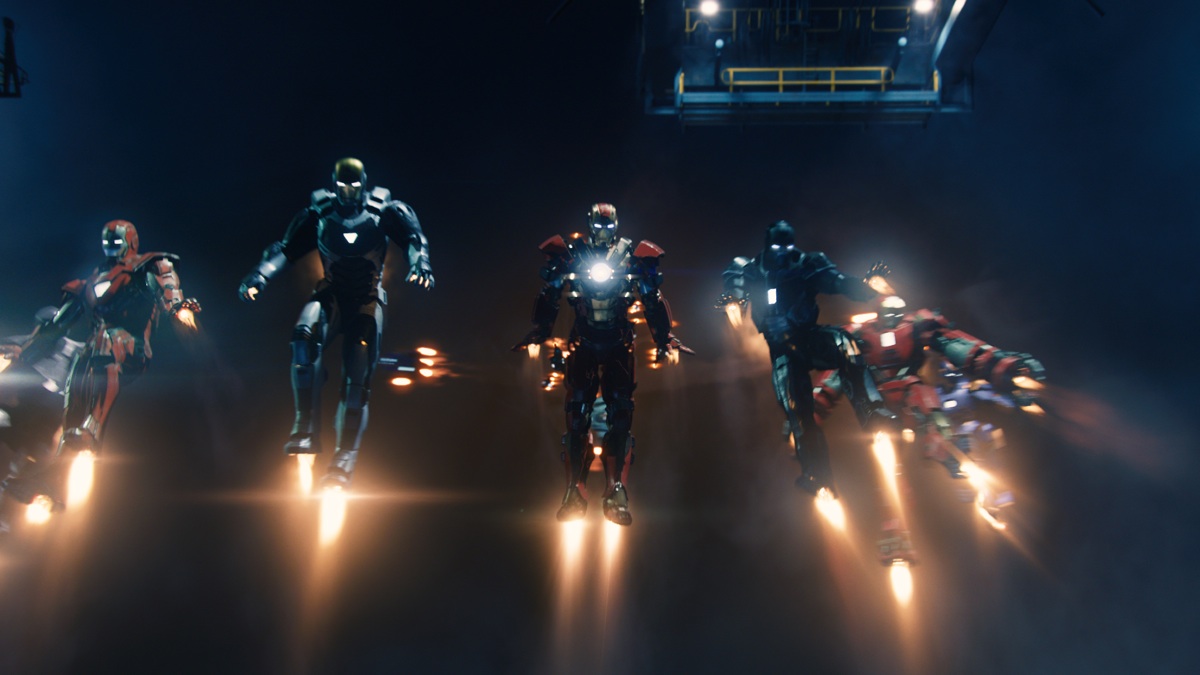 And the movie's climactic sequence seems designed to answer the question of whether one of Tony's super-suits could handle bad guys, be they the Mandarin or superpowered scientist Aldrich Killian (Guy Pearce), without human intervention. Tony summons all of his suits at once to do battle with Killian and his minions. While they're effective at keeping the battle equal, it's only when Tony starts hopping from armored shell to armored shell that the tide starts to turn. Like "Pacific Rim"'s giant robot Jaegers, which need not just one but two pilots to do battle with the enormous monsters that rise up from below the ocean in Guillermo del Toro's forthcoming actioner, "Iron Man 3"'s robots are both less effective and less interesting without a human presence inside them.

Even Superman's gotten in on the action. In a coda to the main action of "Man Of Steel," he hauls down a surveillance drone and throws it at the feet of General Swanwick (Harry Lennix) and Major Carrie Farris (Christina Wren). "It's one of your surveillance drones," he tells the flabbergasted military officials. "I know you're trying to figure out where I hang my cape. You won't." An openly liberal Superman might decry the use of drones for surveillance or targeted killing as a violation of truth, justice, and the American way. This one seems primarily interested in maintaining his cover as Clark Kent, Daily Planet reporter.

Hollywood loves a big man with a big gun, but superpeople and action heroes are confronting the same problems that their working brethren further down the economic ladder. Man versus machine has one connotation when Superman's trying to shut down a World Engine or Kirk is skydiving onto the platform of the drill Nero is using to destroy whole planets. It's another thing entirely when machines, in this case, drones promise to replace superpowers and action heroes, and to do so with greater precision and less collateral damage than men themselves. If you can take out the bad guy without destroying much of a major metropolitan area along with him — and, it goes without saying because we're operating in the realm of Hollywood fantasy, without killing specific Americans in the process — why do we need these brawling, imperfect figures to fight our wars and wreck our cities for us?

"It really does raise the question of what an action hero is supposed to do," NPR critic Linda Holmes wrote earlier this summer of "Fast & Furious 6," raising questions that have only become more pertinent after the city-destroying spectacles of "Star Trek Into Darkness" and "Man Of Steel." "Is he supposed to be victorious in an individual moment, in a hand-fighting confrontation on the top of a moving vehicle? Is he supposed to save himself and those closest to him? Or is he supposed to thwart the bad guy's desire to hurt a bunch of innocent people?"

It says something when the collateral damage caused by superheroes and action stars makes the number of entirely people killed by American drone strikes look relatively modest. It doesn't seem likely, though, judging by the pace of ticket sales, that their stars are in dangers of coming in for the kind of widespread moral opprobrium President Obama's faced in places ranging from Esquire to the floor of the United States Senate. But in debating the use of drones while squaring off against brilliant inventors, genocidal generals, and genetically enhanced criminals, superheroes aren't just intervening in a conversation about the moral use of American power. They're fighting for their own jobs.