"Why Jazz Sucks, And Is Stupid, With Video Illustrations": RogerEbert.com's Glenn Kenny clarifies the meaning of jazz on his site, Some Came Running. Related: Django Gold's satirical fake interview piece, "Sonny Rollins: In His Own Words," for The New Yorker. See also: Justin Moyer's reaction to Gold's article (referenced in Kenny's essay), "All that jazz isn't that great" on The Washington Post.

“So anyways, while The Boswell Sisters' disc I'd had on, ‘Airshots And Rarities 1930-1935’ features twenty nifty ditties, from ‘Here Comes The Sun’ (not the Beatles' tune, but they're lame too, but that's for a different post) to ‘Lullaby Of Broadway’ (is that gay, you think?), ‘On Air’ by The Apophonics features three ‘pieces,’ and while the Boswell Sisters sing peppily, the Apophonics's ‘pieces’ are made up of them rubbing and scraping their traditional instruments, such as they are, and whatever the hell the energized (screw you, limey, I'm using the American spelling) surfaces are. AND YET. In the liner notes to ‘On Air’ is is revealed that these pieces were originally heard on ‘the BBC programme [Christ this British spelling again] 'Jazz on 3’.’ JAZZ on 3. How is this scraping and bowing and blatting and silence any relation to the ‘jazz’ that is practiced by the peppy Boswell Sisters?” 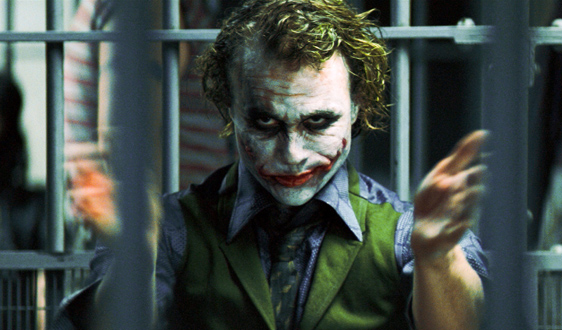 "As Film Stocks Dwindle, Moviemakers Weigh What May Soon Be Lost": The transcript and full audio of a brief but potent report from Neda Ulaby of Texas Public Radio.

“You cannot preserve film on digital technology. In degrades quickly and the formats become obsolete even faster. When you store something digitally it has to migrate once every three years, minimum. How much easier and cheaper, [UCLA film and television archive director Yawn Christopher Horac says, to stick a celluloid reel in a vault for a couple hundred years. That said, he and other archivists are preparing for the worst. 'At some point we may have to buy the patents collectively through, you know, one of our national or international organizations and get a specialty operator to produce film stock,' [Horac says].” 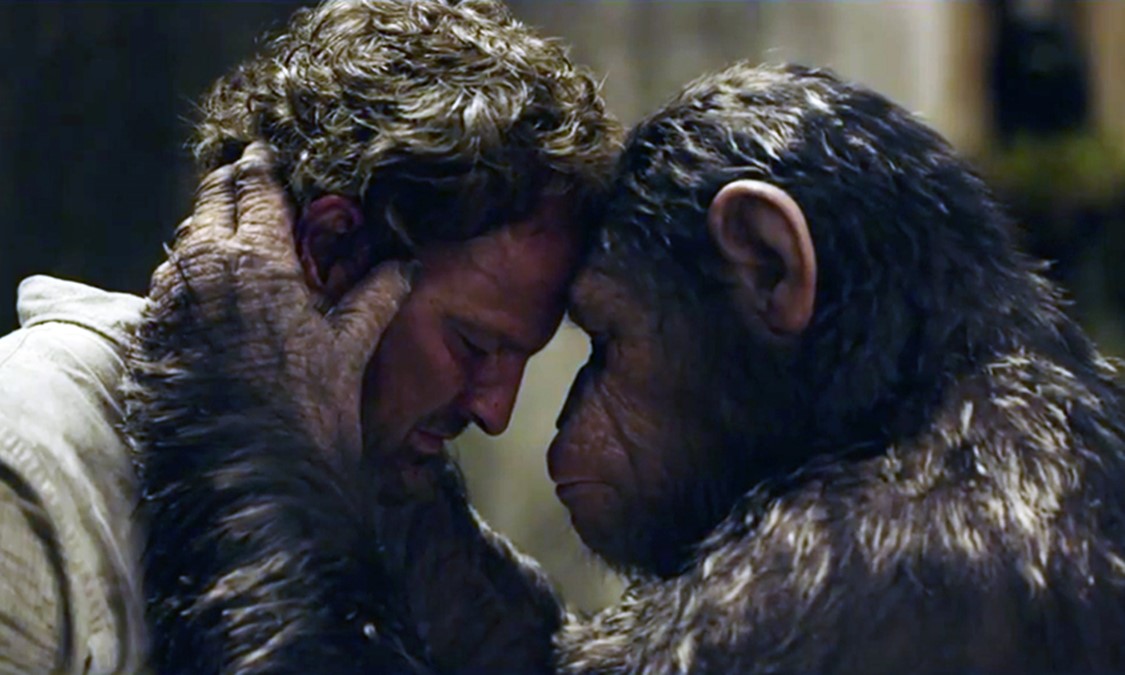 "Planet of Human, Animal & Political Rights": RogerEbert.com's FFC Wael Khairy "presents an analytical look at the 'Planet of the Apes' films and the role they've played in assessing, through allegories, the state of the world—most recently the Arab world" at Cairo Scene.

“'Dawn of the Planet of the Apes’ is a political commentary with very clear parallels to what is happening in the Middle East, not just during the recent Arab Spring, but what has been happening in the Middle East throughout the years. My theory is based on the actions of the film’s characters and how the story progresses. First, we learn that the human race has not gone extinct and that those immune to the virus settled in a small city nearby. The human race here represents the United States. The human city has a strong military base, and much like the United States interest in the Middle East, the humans need to step on the ape village to acquire natural resources. The water pumped out of a dam located on ape domain can generate electricity for the human city. Since gas is running low within their city, the humans are willing to take any military action necessary to reach that dam. Indeed, the story is all too familiar, but Matt Reeves’ political commentary runs much deeper. Caesar makes a very strong statement on behalf of the Arab world. First he shows his primitive ‘manpower,’ and then he addresses the humans in a short but fairly simple peace treaty proposal, clearly stating the consequences that befall foreign interference. ‘Apes do not want war. Do not come back.’ Malcolm, the leader of the human world, peacefully reaches out to Caesar, in an attempt to find common ground, or rather a peace treaty that shall benefit both camps.” 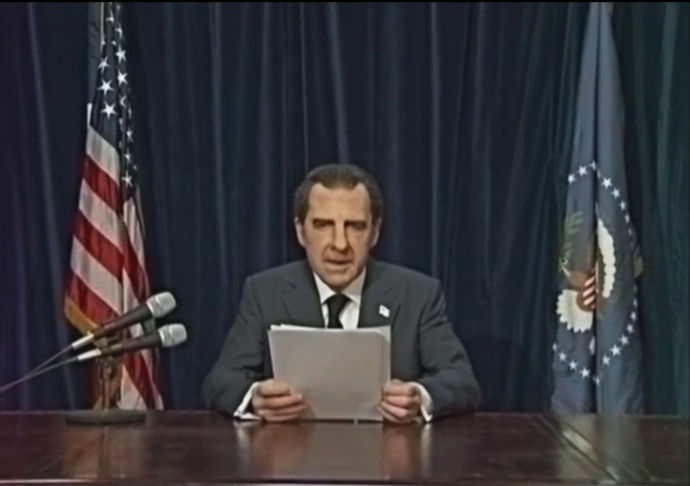 "The Weird Minutes Before Nixon's Resignation": The New Yorker's Andrea DenHoed discusses an excerpt (which accompanied her text) from the series, "Nixon's the One," where Harry Shearer, star of "The Simpsons" and "This Is Spinal Tap," portrays Richard Nixon in the moments prior to his resignation.

“When you watch the actual footage from that evening, recorded by one of the TV cameras in the room, Nixon’s swaggering tone-deafness will make you squirm. Shearer’s reënactment magnifies that effect, both because the use of multiple cameras provides detail and depth, and because presenting the episode as a dramatic scene underlines the strangeness of the President’s behavior. The clip is part of ‘Nixon’s the One,’ a television series created by Shearer and the Nixon scholar Stanley Kutler. It was first broadcast in Britain earlier this year—a savvy choice for a show whose humor depends upon a taut sense of discomfort—and is slated to début in the United States this fall. The script is taken entirely from the Nixon tapes—the audio captured by the voice-activated recorders that Nixon had installed in the White House—and from notes from Nixon’s associates. The selected scenes are reproduced as faithfully as possible—‘every word, every pause, to the best of our ability, every inflection,’ Shearer told me. It’s hard to think of a more apt way to revisit the tenure of a President whose rise and fall was bound, at every juncture, to recordings of one kind or another.” 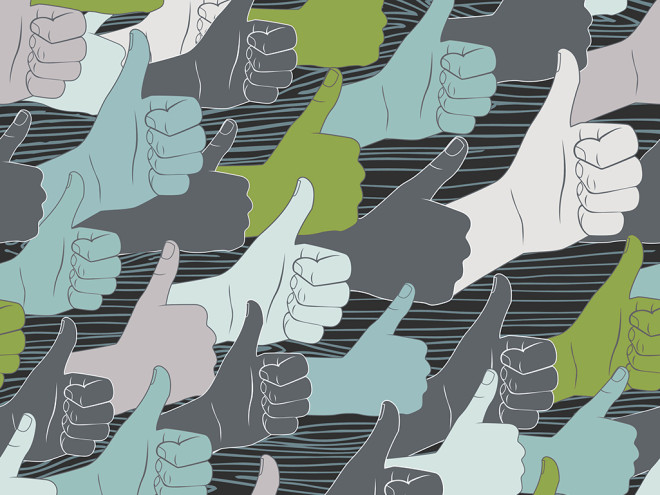 "I Liked Everything I Saw on Facebook for Two Days. Here's What It Did to Me.": A troubling report from Mat Honan of Wired.

“I like everything. Or at least I did, for 48 hours. Literally everything Facebook sent my way, I liked—even if I hated it. I decided to embark on a campaign of conscious liking, to see how it would affect what Facebook showed me. I know this sounds like a stunt (and it was) but it was also genuinely just an open-ended experiment. I wasn’t sure how long I’d keep it up (48 hours was all I could stand) or what I’d learn (possibly nothing.) See, Facebook uses algorithms to decide what shows up in your feed. It isn’t just a parade of sequential updates from your friends and the things you’ve expressed an interest in. In 2014 the News Feed is a highly-curated presentation, delivered to you by a complicated formula based on the actions you take on the site, and across the web. I wanted to see how my Facebook experience would change if I constantly rewarded the robots making these decisions for me, if I continually said, ‘good job, robot, I like this.’ I also decided I’d only do this on Facebook itself—trying to hit every Like button I came across on the open web would just be too daunting. But even when I kept the experiment to the site itself, the results were dramatic.” 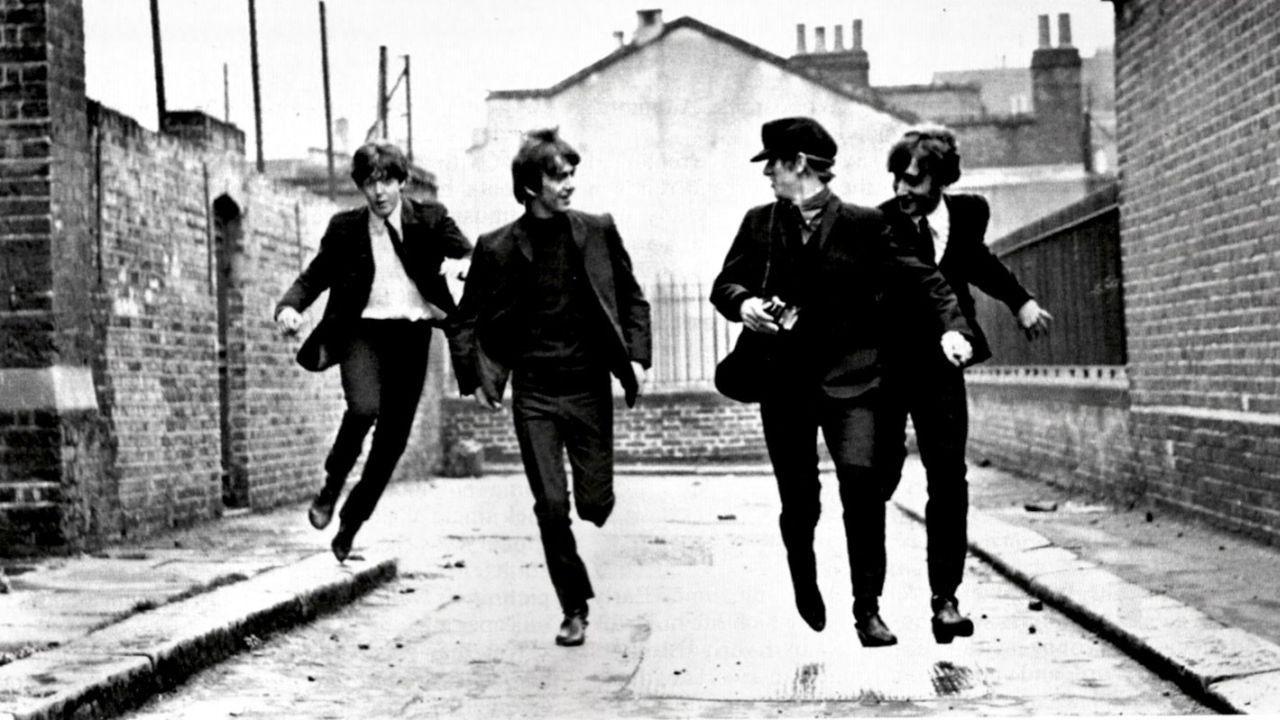 Charles Taylor writes a great piece on the 1964 classic, "A Hard Day's Night," entitled, "Eight Arms to Hold You," for the Los Angeles Review of Books.

Nelson Carvajal "just can't stop," and we're all the luckier for it. His latest video essay, "Our Scary Summer: 1979," includes some unforgettable footage from that year's landmark horror films, and is accompanied by an equally terrific verbal essay by Jed Mayer on IndieWire.