"Keep Calm and Read On." For Texas Monthly, Christopher Kelly reports from a convention of 6,000 Texas librarians who converged to discuss what, if anything, they could do about the state's crippling budget cuts. 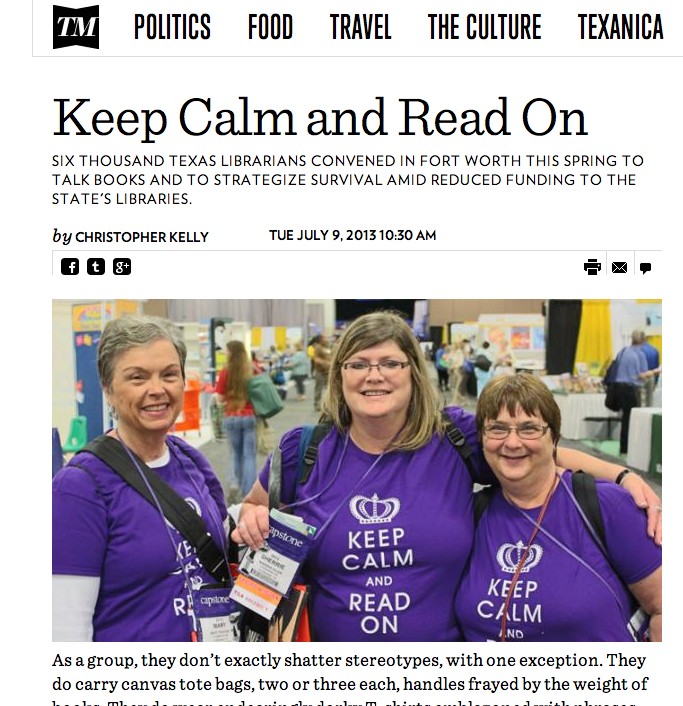 "These are tough times for our state’s libraries. In 2011, Governor Perry signed a budget that slashed funding for the governing body that oversees public libraries by 64 percent, from $20.6 million to $7.3 million, and cut appropriations for local library programs by 88 percent, from $12.8 to $1.6 million. While most local public libraries are funded by city and county taxes, that state money is often critical—for some smaller-town libraries, it comprises the entirety of their book-purchasing budget. (In the just-passed 2013-14 budget, the Library and Archives Commission is set to receive $11.7 million—still 44 percent less than its 2010–2011 numbers.) Meanwhile, the rise of digital publishing and e-books is introducing a whole new set of problems for librarians. Fearful of piracy and desperate to maintain ever-diminishing profit margins, the major publishers either charge outsized amounts for digital copies of their books, or deny libraries e-copies altogether. So what’s a modern librarian to do?"
Advertisement

"'That's My Middle West.' The Most Dazzling Paragraph of The Great Gatsby." Part of "By Heart," an ongoing feature at The Atlantic in which authors discuss paragraphs from classic works that they love enough to have committed to memory. This one's by Susan Choi, author of An American Woman and A Person of Interest. 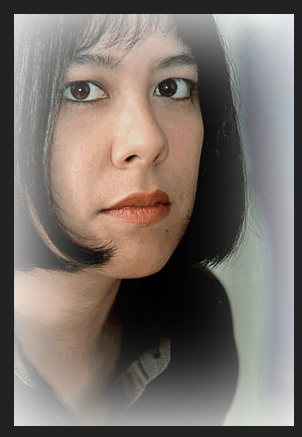 "On a language level, I have a purely visceral reaction this passage. I feel this rush of emotion that I can't really explain but it's tied to homecoming, and travel. I'm from the Midwest, from Indiana, and maybe that's part of it--this passage in some way connects to my desire to romanticize what I consider to be a pretty unromantic place of origin. But the landscape he invokes is rooted very deeply in me somewhere--not wheat, so much as corn, and not prairies so much as farmland. I'm not sure "lost Swede" towns is quite right for Indiana either, though there are certainly lost towns strewn all over that landscape. But it is a primal landscape for me. You know, the first scenes that you see never go away. They are always going to mean something in particular to you. So when Nick says 'that's my middle west,' it makes me feel a tiny thrill of legitimacy. It's not all dreary farmland; I remember why it's beautiful."

"'UnGoogleable' Band Names: sticking it to The Man or shooting yourself in the foot?" By Nimrod Kamer and Katie Craik, for Wired UK. 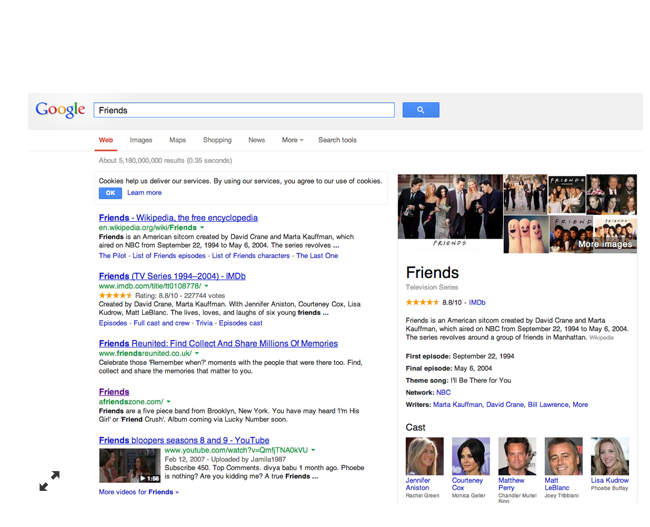 "Recently, as the anti-trend among young bands is to escape the imperialism of the search engine and opt for completely non-exclusive names, such as Pale, Citizens or Friends. When googling Friends, for instance, you'd get to a 1994 TV show about two flatshares in Manhattan. Only when typing friends+band will the relevant NY Bushwick team and their song I'm His Girl pop up. The band's former name, Perpetual Crush, delivers no such confusion. Nikki Shapiro, Friends' percussionist, said in regards to the name choosing process: 'All I can say is it was a big mistake.'"

Report from the 2013 New York Asian-American Film Festival, by Eric Hatch, the director of the Maryland Film Festival.  An overview of what's on the schedule, with some specific personal reactions to a dozen works.
Advertisement 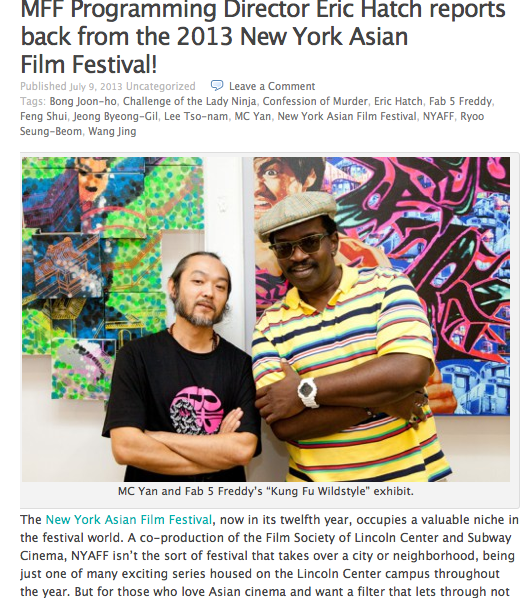 "This year’s NYAFF (ongoing through July 15, if you happen to find yourself in Manhattan) presents approximately 65 features over the course of 18 days, many of them U.S. premieres. Finding its center in emerging titles from around the continent, NYAFF 2013 also includes special focuses on a rediscovered wave of Taiwanese pulp films from the early 80s, a retrospective of work by S. Korean actor Ryoo Seung-beom, a slate of contemporary Filipino independent features, a revival of Enter the Dragon with a post-film discussion on its impact on hip-hop culture, and a lifetime achievement award given to special guest Jackie Chan. I took in a dozen NYAFF films during 4 days in New York, and was greatly impressed with the variety of work on display."

"Interview with Brian Reitzell." An interview by David Schweiger of Film Music Magazine. The composer of the music for NBC's Hannibal talks about his inspirations and techniques. 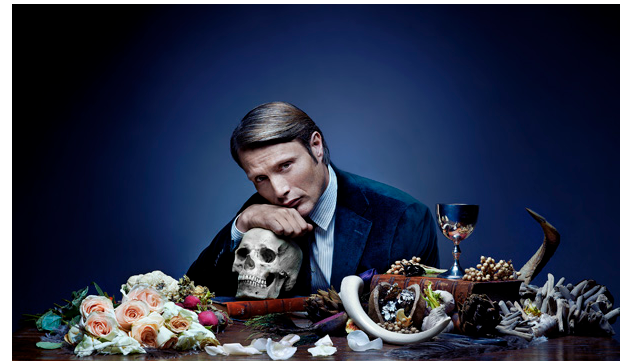 "I’m attempting to do the most elegant horror score that I can give the resources and the fast turnarounds. There are many layers in the soundscape and very little sound design in the show. The music does most of the sound FX, so there is a great deal of textural complexity in the score. The music is quite environmental in the show. If we are in one room or one place there will be a specific sound and tone. But as the characters and the camera move the music is always going with it. I try to keep the music as alive as possible. I like for things to be constantly moving. I think the dissonance might be perceived to be a larger part of the score due to the dark things they are putting in front of me." 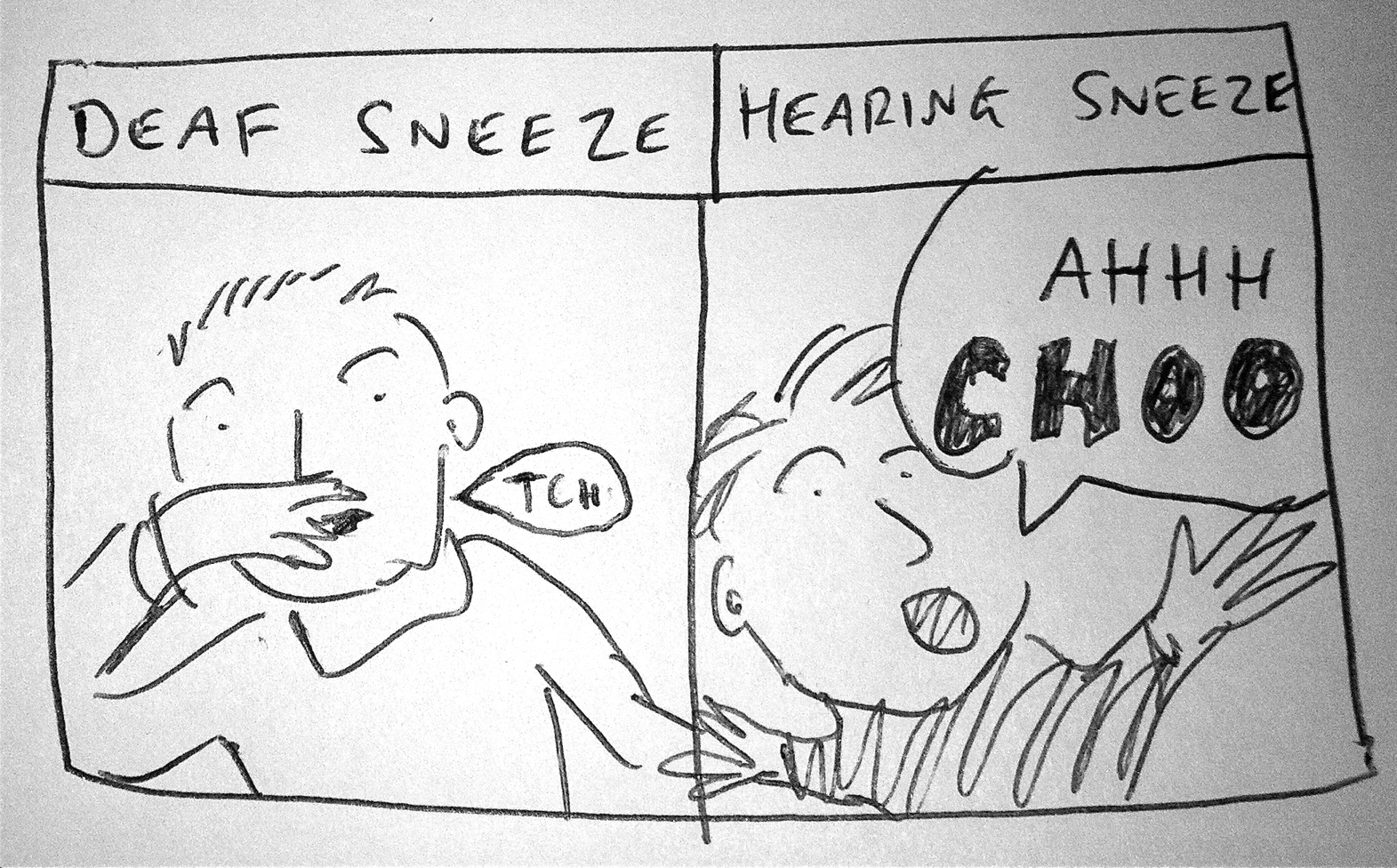 An illustration from "The 10 Annoying Habits of Hearing People." This is part of a piece published by The Limping Chicken, the UK's independent deaf news and deaf blogs website, in which Charlie Swinbourne lets you know how not to react to a deaf person.

The original TV teaser for 1996's Independence Day, which got everyone's attention by blowing up a miniature White House during the SuperBowl. One of many clips included in Vulture's "We're Living in the Age of the Trailer Money Shot," in which Matt Patches talks about the Culture of Whammies that has overtaken films as well as trailers.