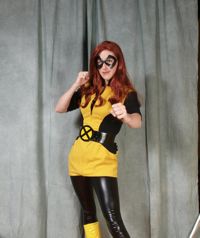 1. "Slut Shaming and Concern Trolling in Geek Culture." Wherein science geek and costumer Emily Finke attended a sci-fi convention dressed in a screen-accurate uniform from Star Trek: TOS, where she was met with microaggression, mock-concern and men intent on outing her as a "Fake Geek Girl."

"Unfortunately, the default assumption of convention space is 'male space' The really annoying thing about this whole discussion? Convention space has never been a space that was solely the domain of men. From the very beginning of the fandom that I chose to represent at Balticon —Star Trek — conventions had women. Women creating costumes, dressing as Klingons. Women discussing gender and racial politics in the series. Women participating in collaborative remixing of the canon. There have always been women objecting to “warrior women” on the covers of books and magazines and protesting the misogynistic habits of male writers who enjoy pinching and groping. There have always been women using science fiction to rewrite gender assumptions. They were there. They are there. They’ve always been there. The history of geekdom is not a history of men, it’s a history of invisible women."

2. "Rock Hudson's Wife Secretly Recorded his Gay Confession." By Stephen Galloway of The Hollywood Reporter. On January 21, 1958, Rock Hudson's wife Phyllis confronted him, demanding to know if he was gay and grilling the actor about a Rorschach test he had taken.

Phyllis: "Everyone knows that you were picking up boys off the street shortly after we were married and have continued to do so, thinking that being married would cover up for you." 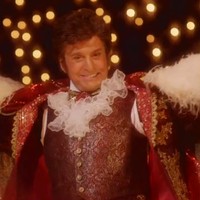 3. "Behind the Candelabra: Why Michael Douglas Nailed Liberace." By Tim Robey, for The Telegraph. A piece arguing that Douglas' own sexual and professional experience might have helped him understand a character who was, on paper, quite different from himself.

"It’s not hard to see why Douglas made such an obviously personal connection with Liberace and why he turns out to have been so perfectly cast. If you ignore the sole issue of sexual orientation, he’s practically spent his career rehearsing for the role. His pants-down performances in Fatal Attraction (1987) and Basic Instinct (1992) are the keystones of his image as a randy Casanova: one he amusingly spoofed in the 2009 rom-com Ghosts of Girlfriends Past, where Douglas played Matthew McConaughey’s dead, Hefner-ish uncle. Liberace, as Behind the Candelabra presents him, is pretty close to a gay Hugh Hefner. There’s the ridiculously ornate mansion, a shrine to excess and a temple to himself. There’s his entourage of pert, willing young companions. Richard LaGravenese’s script doesn’t actually use the words 'sex addict', but Liberace talks about the implants he’s had to keep his equipment working as fast as his libido."

4. "Carey Mulligan Eyed to Play Hillary Clinton in Biopic." By Borys Kit and Tatiana Siegel of The Hollywood Reporter.

"The Great Gatsby actress is the producers' top choice to play Clinton during the formative years of her storied career in public service, according to several sources. Several American actresses' names have been bandied about to take on the widely admired but often polarizing figure, including Scarlett Johansson, Jessica Chastain and Emma Stone. Ironically, the British actress, who was nominated for a best actress Oscar for her starring role in An Education, has never been mentioned. Sources tell The Hollywood Reporter that the actress will have a sit-down with director James Ponsoldt (The Spectacular Now), but sources say both sides are eager for it to work." To read Roger Ebert's rave review of Ponsoldt's The Spectacular Now, click here. 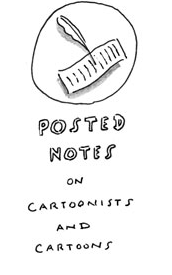 5. "Collaborating Cartoonists." At Inkspill, a blog of "New Yorker Cartoonists News and Events," Michael Maslin says, "Collaborating cartoonists have been on my mind recently. Who are they, why do they do it?  Does it double the fun? A spate of collaborations in The New Yorker within the past year caused me to dig into the subject and ask a few questions."

"One could argue that there was weekly collaboration from 1925 through 1950, the years the magazine’s founder, Harold Ross edited the magazine. Drawings were discussed and often “improved” by committee (see Ink Spill’s February 18, 2012 post, The Art Meeting). After suggested changes were made by the artists, the work was brought back to the the Art Meeting, for further evaluation. The process, for just one drawing,  could sometimes repeat itself a number of times.  James Geraghty, the Art Editor from 1939 through 1973, might explain to an artist how he envisioned a  particular drawing. In James Stevenson’s  new book The Life, Loves and Laughs of Frank Modell, Geraghty is quoted instructing a cartoonist: “Make it more …beautiful.” Ideas were sometimes generated in the art office and passed on to the artists ( these are often labeled “Office Idea” in the magazine’s archives, with no one person receiving credit). This variety of interaction gave way in 1973 when Lee Lorenz assumed the title of Art Editor. The cartoonists Lorenz brought into the fold showed up with the idea, the caption and the art.  This was an organic shift, tied into the times that were a-changin’, similar to the emergence of the singer-songwriter in popular music."

In this clip from 1996's The Celluloid Closet, a documentary based on Vito Russo's acclaimed history of gay and lesbian themes in Hollywood movies, Rebel Without a Cause screenwriter Stewart Stern talks about how signifiers of the Sal Mineo's character's gayness were cleverly worked into an outwardly "straight" drama. To read Roger Ebert's three-star review of the documentary, click here.