“[Stephen Cone:] The community that one finds in religion appeals to me. I haven’t been a believer in a long time, but I love the idea of very socially progressive liberal Midwestern congregations. I love the idea of people coming together in mind and heart, who don’t shut their brains down and are politically engaged and spiritually engaged and socially engaged. One of my great heroes over the last few years is Marilynne Robinson, the author. I don’t share her belief system, but she is a powerfully engaged liberal Christian who writes gorgeous fiction and essays that engage with science and politics and America in satisfyingly intellectual ways. She takes these fiercely independent angles on things, and her beliefs overlap with those of progressive atheists as well as conservative Christians. I may not have a traditional belief system, nor do I believe in the supernatural at all, but I do believe in a spirit that is not really all that different from space and time. Whenever someone comes along who has managed to define that for themselves, more specifically than I have, while combining rigorous intellectual fervor and deep spirituality, I find that totally impressive and exciting, and in some ways, maybe I am not as unlike them as I think.” 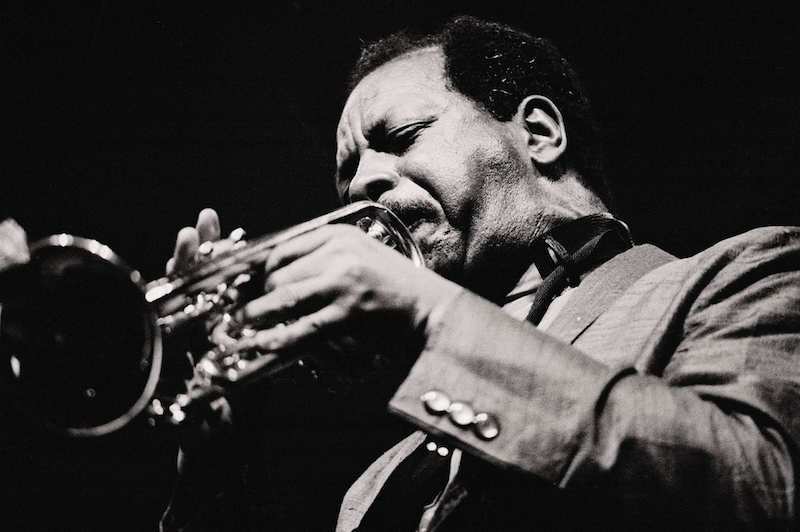 "Ornette Coleman's Uncompromising Genius": Our own Glenn Kenny pens an appreciation of the late musical visionary at Vulture.

“In the early ’70s, he traveled to Morocco to record with the Pied Pipers of Middle Eastern trance music, the Master Musicians of Joujouka, for his revolutionary record Dancing in Your Head. Dancing was not just a springboard for what Westerners now, for better or worse, call World Music, it also served as a prominent informal introduction to Harmolodics, Coleman’s attempt to construct a theory of free playing. There are many different explanations of Harmolodics out there, some more comprehendible than others, but the most useful way of defining it might be to say that it sought to destroy hierarchies within musical expression. To say, in other words, that the particular noise you make through the sax or the guitar is of equal value to the chord or melody you attempt to articulate with it. Maybe. The best appreciation of Harmolodic music is achieved by listening to it, and some of the best of it was made by the various iterations of Ornette’s ’70s electric group, Prime Time, which spawned such monster musicians as bassist Jamaladeen Tacuma, guitarists Bern Nix and James ‘Blood’ Ulmer, drummer Ronald Shannon Jackson, and more. Body Meta, Of Human Feelings — as rocking as these ’70s records are, they sure as hell were not ‘fusion,’ and indeed, their rollicking freedom proved perhaps more inspirational to the New Wave musicians of New York’s downtown scene of the ’70s and ’80s than to any old-school or fusion jazzers. See, for instance, John Zorn.” 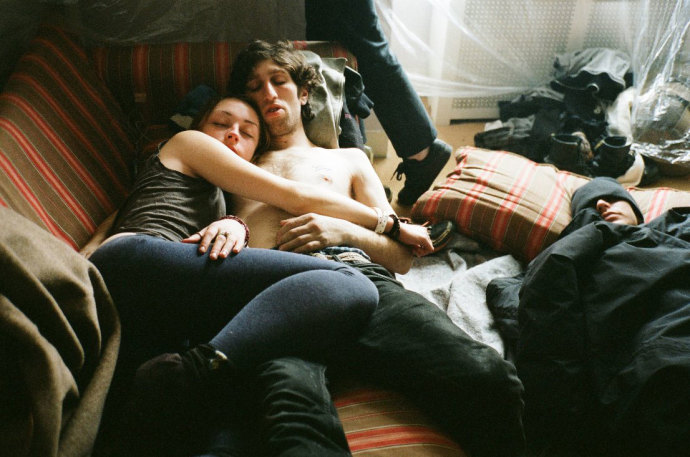 "Heroin, Too Close": The New Yorker's Richard Brody offers his take on Josh and Bennie Safdie's "Heaven Knows What."

“The Safdies’ genius involves their movies’ extreme symbiosis with performers. Just as the classic auteur seems to appear beside a projected film, just outside the image, as a virtual presence throughout, so the Safdies, at their best, invite their performers to leap out of the frame and stand beside them, behind the camera, transfiguring the brothers’—and the audience’s—view of them. Just as they employ Bronstein, a great director, as their actor, or screenwriter, or editor, and a vital personality such as Holmes, a non-actress, as their star, they turn themselves, as directors, into actors—they are great cinematic chameleons who take on the identity, while directing, of the participants in their film. That’s why their empathy seems so embracingly extreme and intense. The brothers turn the cinematic mirror around on itself, capturing the world as it feels to their characters, to their performers, to their collaborators. Without sentimentalizing the characters of ‘Heaven Knows What,’ and without romanticizing addiction or dereliction in any way, the Safdies achieve an immediate contact with experience itself, making the film a radical act of sympathy that nonetheless doesn’t suspend or defy judgment.” 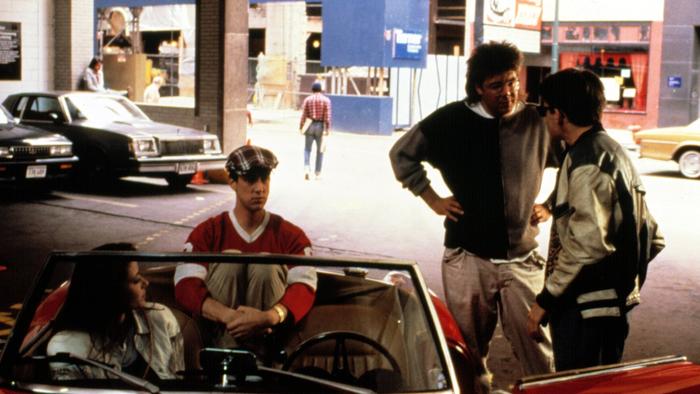 "Gene Siskel wasn't the only critic who had problems with 'Ferris Bueller'": A reminder from Chicago Tribune critic Michael Phillips.

“Guess what? Gene Siskel wasn't alone in finding "Ferris Bueller’s Day Off" more than a little off. It’s sweet to see so much gushy hometown pride greeting the 30th anniversary of the day (June 5, 1985) Ferris cut class to joyride around Chicago. The film itself didn’t come out until the summer of ’86, but whatever. A 29th anniversary is something. For the record, though, let’s correct the impression peddled by Siskel’s own paper, and mine, that the film was and is universally cherished. Even in Chicago, the response to the comedy back in '86 was medium cool. Yes, Roger Ebert liked it: three stars out of four, though we should remember that Roger's three often equaled other critics’ two or two-and-a-half. And even Roger acknowledged that ‘all of the adults, including a bumbling high-school dean (Jeffrey Jones), are dim-witted and one-dimensional. And the movie's solutions to Cameron's problems are pretty simplistic. But the film's heart is in the right place, and ‘Ferris Bueller’ is slight, whimsical and sweet.’ Doesn’t quite sound like a classic in the making. Siskel's short-hand assessment, accompanying his two-star Tribune review? ‘Not worth cutting class.’” 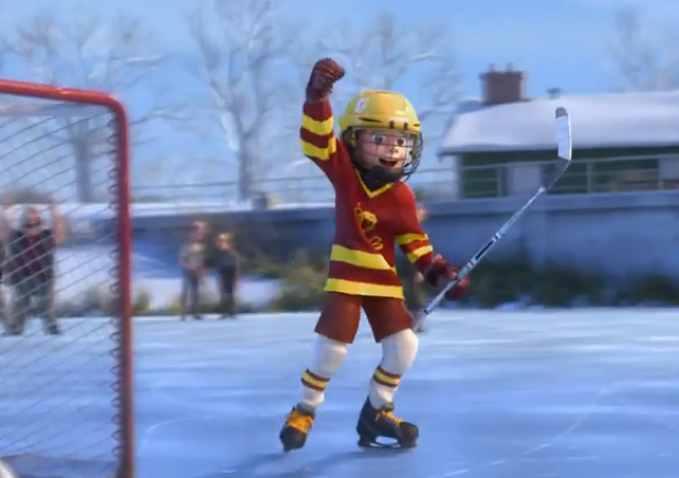 "Why Pixar Whiz Pete Docter Decided to Enter a Young Girl's Mind—and Turn Your Emotions Inside Out": At Indiewire, our own Susan Wloszczyna interviews the director of Pixar's latest universally acclaimed feature.

“It is great that you based ‘Inside Out’ on your daughter’s experiences and your reaction to her maturing. But does she mind it that you are using her life for source material? It is different than when you used her as the voice of young Ellie in ‘Up.’ You also have a son, Nicholas, who is 19. Have you used him for inspiration as well? [Docter:] ‘She was great as Ellie. Bob Peterson [who co-wrote ‘Up’ with Docter] pulled this spirited, conspiratorial angle out of the character, and she was fun to listen to. Elie was 9 or something when she did the voice. We would say the line to her and she would parrot it back to us. Watching her grow up and go through that change triggered my own memories of that age. It gets complex watching her grow up. We had two kids, and we knew we would not have any more. Parents don’t want their children to lose that purity and innocence of childhood. We want to bottle that and hold onto that, but it’s impossible. ‘Inside Out’ grew out of the complexity of knowing that feeling that you want to hold onto it. That is Joy’s journey.’” 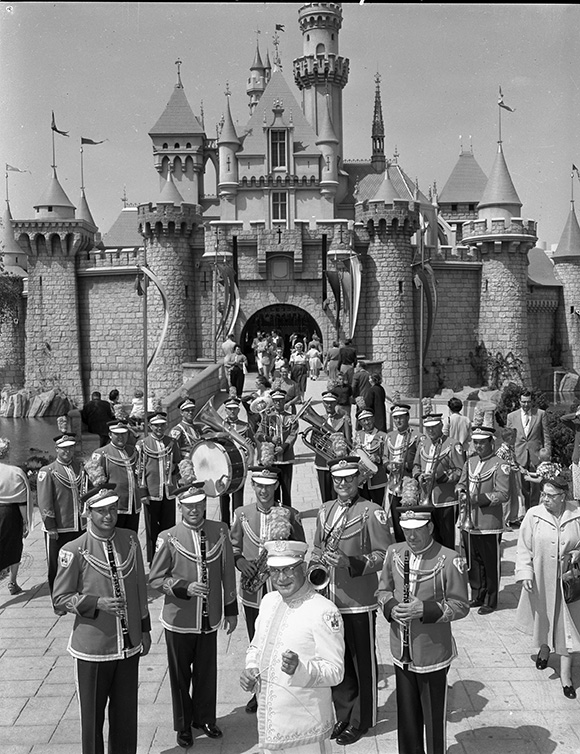 KCET's Kimberly Stevens reports on the legacy and the "end of run" notice for the original Disneyland band.

Richard Vezina mixes the styles of two genius filmmakers in this marvelous video essay, suggesting what Stanley Kubrick's "The Shining" would have looked like had it been directed by David Lynch.