The Chase is the Thing: On Michael Mann's "Manhunter," "Heat" and "Public Enemies"

"You don't live with me, you live among the remains of dead people. You sift through the detritus, you read the terrain, you search for signs of passing, for the scent of your prey, and then you hunt them down. That's the only thing you're committed to. The rest is the mess you leave as you pass through."
—"Heat"

A thematic preoccupation running though most Michael Mann films—along with men in immaculately tailored suits standing mournfully before large bodies of water and calling one another variations on "sport," "brother" or "slick"—is one of pursuit. The chase is the thing; cat and mouse games played by obsessively driven pros who define themselves by being the best there is at what they do. Character is action, but actions have consequences.

Being the best brings with it a terrible price. Invariably, professional success leads to personal destruction, as these men (and they're always men in this Mann's Mann's world, baby) sacrificing their families, loved ones and quite often their souls in these pursuits. Whoever wins is the guy willing to lose the most. Victories are muted, so pyrrhic they feel like defeats.

Michael Mann's third theatrical feature, 1986’s "Manhunter," is a cat and mouse game in which the mouse doesn't even appear onscreen until halfway through the movie. Adapted from Thomas Harris' bestseller "Red Dragon"—which pretty much kickstarted the entire serial killer genre and began a Hannibal Lecter franchise that's still chugging along thirty-odd years later—the most shocking thing about revisiting "Manhunter" is how little violence we actually see. But it's all happening over and over again inside the head of Will Graham, a brilliant FBI profiler blessed (more like cursed) with uncanny powers of empathy.

A feature-length riff on Nietzsche's old quote about looking long into the abyss, "Manhunter" is a moody, sorrowful picture about a man consciously uncoupling himself from domestic comforts in order to become that which he must destroy. Played in one of those pushy, mid-eighties William Petersen performances that's a bit too much while being just right (see also "To Live And Die In L.A.") Graham is retired when the film begins, scarred both physically and mentally after a scuffle with everybody's favorite epicurean shrink.

Dragged back into action for a particularly nasty case that’s stumped his weary former boss (Dennis Farina), Graham at first tries to keep a safe psychological distance from his prey. While poring over the grisly crime scenes, he monologues in the second person, piecing together the killer’s thoughts in accusatory outbursts: “You needed to see her, didn’t you? You son of a bitch.” Will puckishly provokes his prey to break routine and pop his head out by suggesting to the media that the suspect is a homosexual who had relations with his mother, a bullying, schoolyard taunt that yields disastrous results.

It is only when Will Graham sends his family away and embraces the madness and ugliness inside him that he is finally able crack the case. His second person exclamations chillingly switch to the first—with “you” becoming “I” the scariest part of a generally terrifying movie. Graham casts off all that is good in his life to chase down the darkness, until at last seated alone at an airport bar he comes to a reckoning: “It’s just me and you now, sport.”

He says it to his reflection in the window. 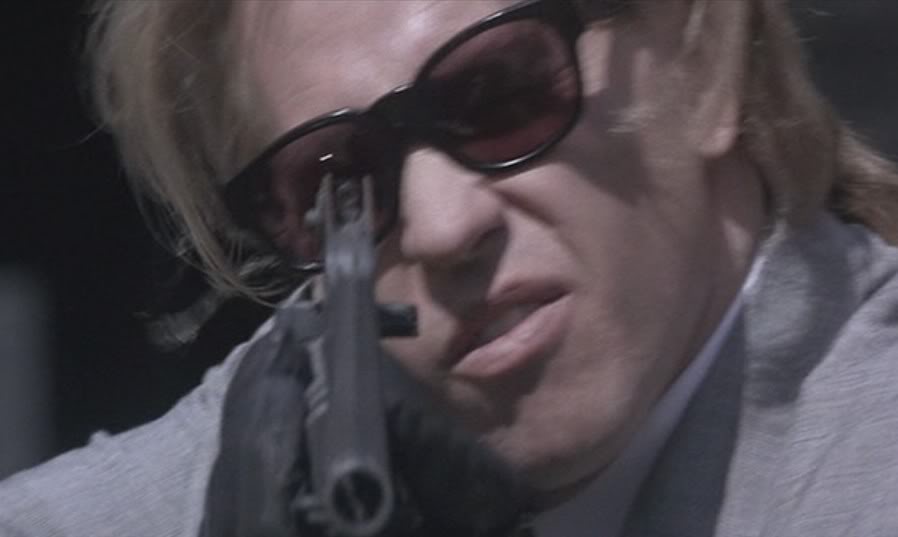 1995’s “Heat” is Michael Mann’s magnum opus. It’s a sprawling, backbreakingly ambitious 172-minute crime saga with more than seventy speaking roles, and is the purest expression of the filmmaker’s pet themes, played out with a doomy grandeur many critics at the time considered overblown, but I still find magnificent. (I went to see “Heat” seven times during its initial theatrical release. Yeah, things weren’t going so well for me at the time.)

It’s Mann’s ultimate cat-and-mouse game, starring Robert De Niro as The Perfect Criminal and Al Pacino as The Most Obsessive Cop. Everything about this movie is in capital letters preceded by articles, befitting the intertextual clash of the titans going on with the casting of the leads. While these two legendary icons of seventies crime cinema had of course both appeared in “The Godfather Part II,” they’d never shared a scene together until now. Mann continues to stoke our anticipation as the film goes on, perversely keeping them apart for as long as possible. 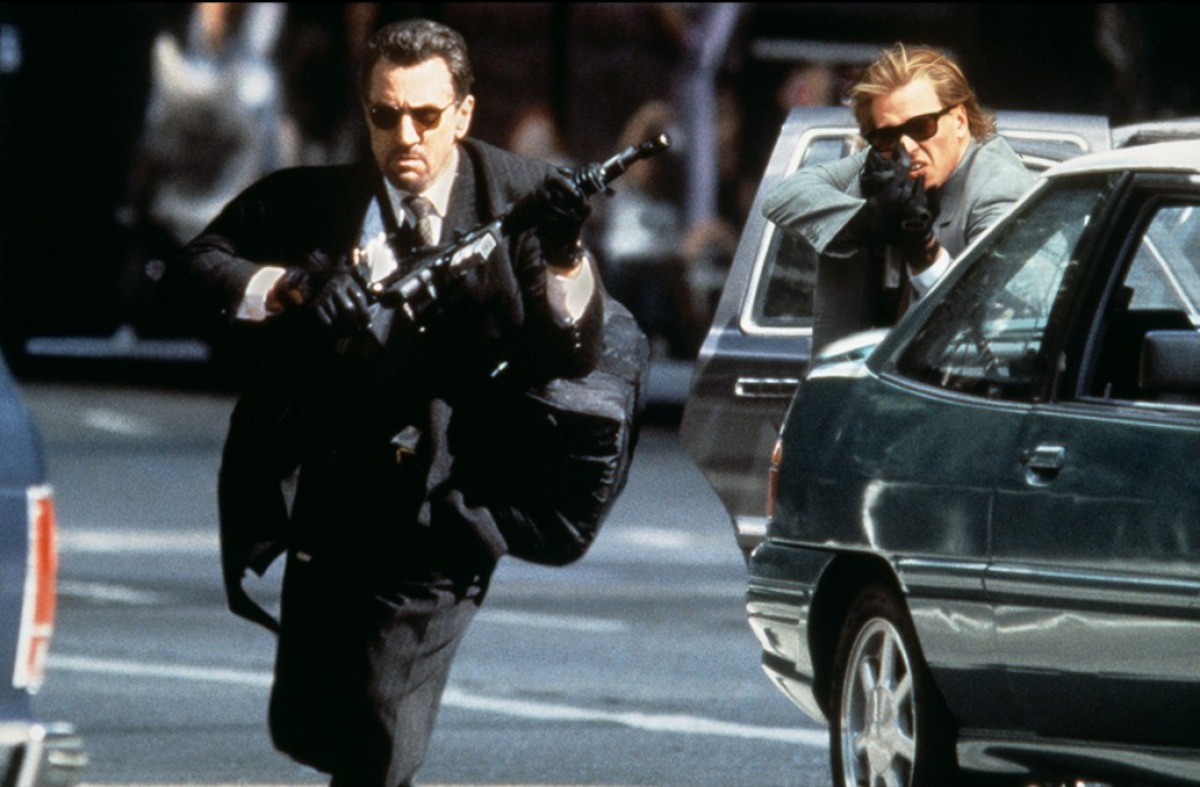 De Niro gives one of his most controlled, minimalistic performances as Neil McCauley; elegant and eerily precise in his movements, like a coiled snake who strikes unexpectedly and with lethal force. Living by the credo “have nothing in your life you cannot walk out on in thirty seconds flat,” Neil doesn’t even own any furniture.

Pacino, on the other hand, is all over the place. His Vincent Hanna is described as a “heart attack man” on the downslope of a third marriage, pile-driving his way through the movie braying and barking like a maniac. It’s worth noting that Mann’s original script has Vincent written as a cokehead (secretly snorting blasts before interrogations off the tip of a hunting knife!) but save for one telltale nose-wipe on his way to brace Tone-Loc, all evidence of this has been removed from the final film. I’m told Mann’s editing choice threw Pacino for a loop, as without chemical motivation the character’s rococo outbursts come off slightly deranged. But it was a wise decision—as Hanna’s real addiction is to the chase.

These two circle one another for half the movie, each privately expressing admiration for the other’s smarts and tactics. When McCauley tricks Hanna’s crew into chasing down a phony lead so he can photograph them from afar, the latter reacts with delight. “Okay, motherfucker!” Pacino bellows with a wide, toothy smile. Hundreds of yards away, looking through a high-powered telephoto lens, De Niro nods and returns the grin. These brainy boys have finally found worthy adversaries, and the pleasure is mutual. 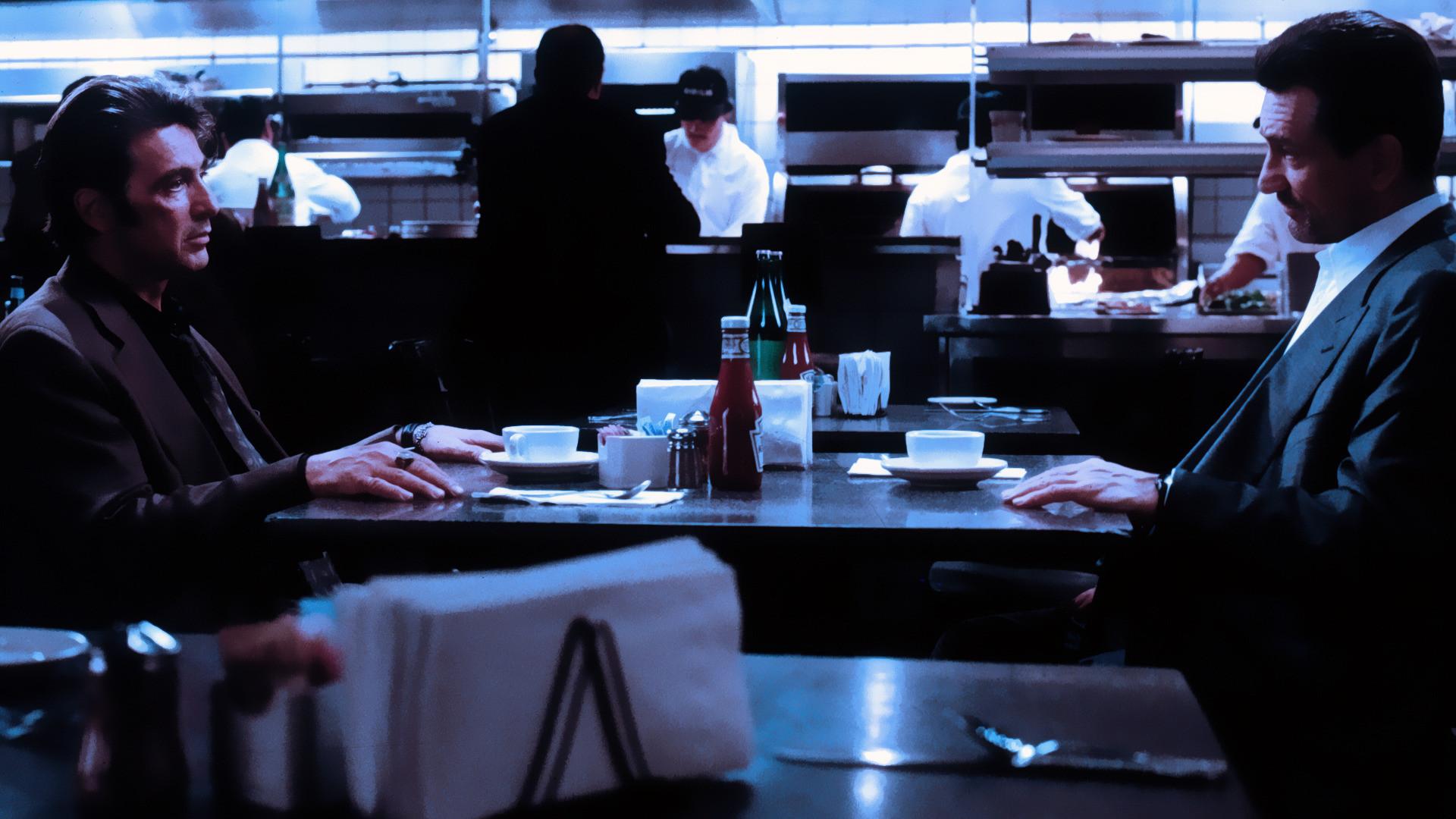 After extended foreplay the two square-off at the picture’s mid-point, not in a gunfight but over a cup of coffee. (Brilliant as this scene may be, I’m still angry at Mann for cutting away before we get to see which one picked up the check.) Thoughtful and underplayed, their odd interaction finds a magical sweet-spot halfway between a measuring contest and a love-fest, with Pacino and De Niro threatening to kill each another but also talking about their dreams. One of the film’s key lines is buried in here, when McCauley asks: “If you’re on me and you gotta move when I move, how do you expect to keep a marriage?”

Hanna doesn’t answer because he can’t, and the evenly matched “Heat” is only decided when Neil betrays his oft-quoted Spartan credo about being able to walk away from anything in thirty seconds flat. He’s already gotten away—free and clear on his way to the airport while Hanna has given up and gone home. But McCauley just can’t stop himself from turning around and going back to mete out justice for his fallen friends. This loyalty, this nagging sense of honor, is what ultimately dooms him.

Vincent, by contrast, freely dashes away from the hospital where his step-daughter is in critical condition after a suicide attempt and his soon-to-be ex-wife sobs inconsolably on the waiting room couch. There’s an almost comical shot of Pacino basically skipping down the stairs—sprinting from his emotional responsibilities to the people who love him with a spring in his step. “All I am,” Hanna admits just moments before abandoning his family, “is what I’m going after.” 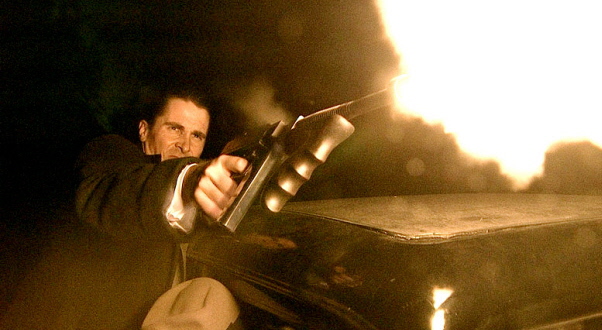 Fourteen years later Mann returned to the template of “Heat” with startlingly different results. 2009’s “Public Enemies” stars Johnny Depp as notorious bank robber John Dillinger and Christian Bale as Melvin Purvis, the FBI agent who brought him down. Although the stage seemed to be set for a Junior Method-Actor All-Star Redux, the resulting film is much blunter and more difficult, stubbornly subverting all the pleasures of “Heat” to an obstinate degree.

I admired “Public Enemies” enormously when I first saw it. And yet, sitting down to write this piece I realized that since then I’ve never felt compelled to watch it again. (This is odd, because anyone who’s been unfortunate enough to live with me can testify that Michael Mann movies often take up residence in my DVD player for entire weeks at a time.) It’s a very difficult film to warm up to, one of those that’s more fun to talk about than it is to actually watch.

For all intents and purposes a Rip Van Winkle story, “Public Enemies” finds Depp’s Dillinger emerging from almost a decade in prison to find a world that has changed without asking his permission. Dillinger’s theatrical, smash-and-grab bank jobs still make him a folk hero to the Depression Era populace, but crime got awfully organized while John was away. He’s told point blank by a member of “The Syndicate” that a room full of telephones taking bets can earn ten times as much money in a single day as his swaggering antics can in a month, without any of the undue police attention.

So the mouse here is floundering, a relic out-of-time with no direction home. And in this brave new world the cat has many paws. That unctuous hobgoblin J. Edgar Hoover’s Federal Bureau of Investigation has recruited brainy college boys to use cutting edge surveillance technology, and so Mann signals this encroaching modern age by shooting “Public Enemies” on hand-held hi-def cameras, making the lush period décor of 1933 look like a forbidding, alien landscape.

The film explicitly mimics the structure of “Heat,” complete with a mid-movie dialogue showdown between the antagonists followed shortly thereafter by the kind of truly spectacular shoot-out that Mann does better than anybody else. But watching it again “Public Enemies” feels sour, with a metallic aftertaste. Deliberately eschewing the sumptuous, visual romanticism that makes movies like “Manhunter” and “Heat” so compulsively re-watchable, it’s ugly and jagged. Same goes for these antagonists.

Purvis is introduced shooting Pretty Boy Floyd (a pre-“Jump Street” Channing Tatum) in the back and hardly gets cozier over the course of the film. He mostly presides silently while his squad of goons browbeats and tortures suspects, only making a belated stab at human decency after they beat a woman with a phone book until she soils herself.  Unlike Graham or Hanna, Purvis is unencumbered by any sort of personal life. He has so little to lose that the character becomes just another tendril of J. Edgar’s creepy, pervasive hi-tech surveillance culture.  (Funny coincidence that very same summer, across your multiplex hall Bale was also starring in a sequel to a movie called “Rise Of The Machines.”)

There’s not much gamesmanship to this manhunt, and after Dillinger is gunned down in the street we learn that Purvis put a bullet in his own head not too long afterwards. “Public Enemies” finds Mann at his most exhaustedly pessimistic, suggesting that all his fabled, mythic chases might really just be doomed figures running after each other down dead end streets.