Edited by Marie Haws, Club SecretaryFrom Roger Ebert: Club members receive the complete weekly Newsletter. These are abridged and made public on the site three weeks later. To receive the new editions when they're published, annual dues are $5. Join here.From The Grand Poobah: Reader Steinbolt1 writes in: "Mark Mayerson has been putting together mosaics of all the scenes from specific Disney animated films, and is currently working through Dumbo. Each scene has the specific animator(s) who worked on the film listed above it. This is my favorite post on Dumbo, so far:

"The only humans we've seen previously are in sequence 3. They are all white and wearing uniforms that clearly mark them as circus employees. When we get to this sequence, the only humans we see are black. As they are disembarking from a railroad car, we know that they are also employees, but they don't get uniforms. The roustabouts are the ones who do the heavy lifting, regardless of the weather. Why aren't the rest of the employees helping? I guess the work is beneath them. Let's not forget that the circus wintered in Florida, at the time a Jim Crow state." - Mark Mayerson; animator, writer, producer, director, Canadian.

"There is hope. People are good." - Roger, from his tweet for A Small Act.    The heartwarming documentary "A Small Act" had its broadcast debut July 12 on HBO. For a list of additional dates on HBO along with Festival screenings, go HERE.

A Small Act (2010) directed by Jennifer Arnold. With Chris Mburu, Jane Wanjiru Muigai and Hilde Back. "A Small Act" centers on the life story of Chris Mburu, who as a small boy living in a mud house in a Kenyan village had his primary and secondary education paid for by a Swedish woman. This cost her $15 a month. They had never met. He went on to the University of Nairobi,graduated from Harvard Law School, and is today a United Nations Human Rights Commissioner." - Roger, from his review HERE.

The Grand Poobah writes: thanks to club member Jana J. Monji for her tip on this animation discovery she made far from the beaten track. BIG BANG BIG BOOM (2010) direction/animation by BLU.  A short film featuring wall-painted animation. An unscientific point of view on the beginning and evolution of life ... and how it could probably end.

Speaking of evolution and art...Behold the Central Hall and Grand Staircase inside The Natural History Museum, in London.  Widely regarded as a "Cathedral to Nature", the landmark "High-Victorian" Alfred Waterhouse building with its ornate terracotta facade and interior was built and opened by 1881. The museum is home to some 70 million specimens and items within five main collections: Botany, Entomology, Mineralogy, Paleontology and Zoology, and includes specimens collected by Charles Darwin. Members will perhaps recall seeing a video of its painted ceiling, inside the Newsletter. (Photo by Andy Allum 2008) 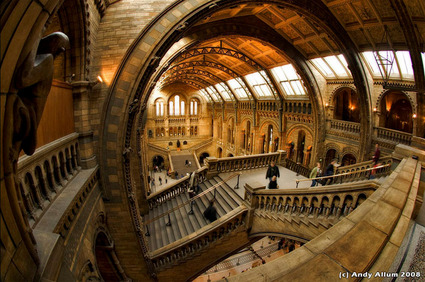 Shaun The Sheep: "Still Life" - series 1 ep 6. Shaun the Sheep is a much beloved British stop-motion animated children's TV series produced by Aardman Animations (Wallace and Gromit) for the BBC. Plot: the Farmer takes up oil painting and is determined to paint a masterpiece. But when his back is turned, Shaun and his buddies decide to give it a try. Note: series one is available in North America on DVD.

Shaun the Sheep: "Timmy in a Tizzy" Series 1 ep 4 (2007) Little Timmy gets upset after Farmer takes his teddy bear. And it's up to Shaun and his friends to get it back before his arch-nemesis Pidsley the cat, notices...

Advertisement
ARCHITECTS BUILD SMALL SPACES, V&A SUMMER EXHIBITION 2010:The Victoria and Albert Museum is staging a contemporary architecture exhibition exploring the power of small spaces, and features work by seven international architects who were commissioned to design structures exploring notions of refuge. Runs August 30th.Architect Rintala Eggertsson transformed the small space inside a stairwell into a 3-story towering bookshelf filled with 6,000 books. The design is called "ART BOOKTOWER"OMG!  It's like a Quiddich Tower full of books!  Awesome. (click to enlarge.)

The Passenger (2009) Chris Jones is an Australian artist, animator and musician. Six years in the making, "The Passenger" premiered at the 2006 Los Angeles International Short Film Festival where it won Best Picture. It was also awarded Best Film at the Melbourne International Animation Festival, in Australia. Synopsis: "storm clouds gather as a timid bookworm braves his daily walk to the bus stop. When he discovers what awaits him on board, he realizes he'd have been better off outside in the storm." - from the official site for The Passenger.

Alarm (2009) Directed by Moohyun Jang. Produced by the independent Animation team, MESAI. Alarm is a brilliant animated short from Korea about our relationship with devices that measure time and wanting to sleep in.

For the friend who already has a Shakespearean insults mug...Cookie Misfortune Evil Fortune Cookies: fortunes range from insulting to hilarious and come packaged in a quart-sized take out box. 10 cookies per. $9.99 at ThinkGeek. 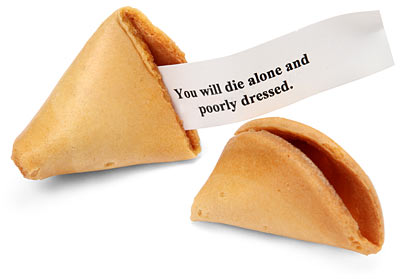 Lifted (2006) Pixar animated short directed by Gary Rydstrom. Lifted was shown with Ratatouille (2007) and also screened at The 42nd Chicago International Film Festival. It's the story of a young alien taking his abduction test. Note: there's low sound. You'll need to turn up your speaker volume.

Advertisement
Take me to your leader! 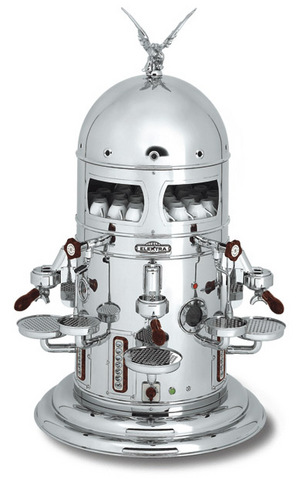 Coffee and Cigarettes (2004) Written and directed by Jim Jarmusch. Featuring Roberto Benigni, Steven Wright, Joie Lee, Cinque Lee, Steve Buscemi, Iggy Pop, Tom Waits, Joe Rigano, Vinny Vella, Vinny Vella Jr., Renee French, E.J. Rodriguez, Alex Descas, Isaach De Bankole, Cate Blanchett, Meg White, Jack White, Alfred Molina, Steve Coogan, GZA, RZA, Bill Murray, Bill Rice and Taylor Mead.  Synopsis: the film is composed of a series of humorous short vignettes built on one another to create a cumulative effect, as the characters discuss things such as caffeine Popsicles, Paris in the 1920s, and the use of nicotine as an insecticide - all the while sitting around drinking coffee and smoking cigarettes. (Wiki)"The third of the segments to be filmed, "Coffee and Cigarettes II: Somewhere California," won the award for best short at Cannes and is a little masterpiece of observation about two musicians acutely aware of who they are and who the other one is, while trying to appear unimpressed. Tom Waits and Iggy Pop star in a subtle bout of one-upmanship. Agreeing that they have given up smoking, they smoke -- which is OK, they agree, as long as they've given it up..." Roger, from his film review HERE.

The Cat Piano (2009) is an award-winning Australian animated short by The People's Republic of Animation, directed by Eddie White and Ari Gibson. Plot synopsis: a city of singing cats is preyed upon by a dark, shadowy figure intent on performing a twisted feline symphony. Features the voice of Australian artist Nick Cave narrating a poem written by Eddie White. Note: there actually was such a thing as a cat piano or Katsenklavier.

Rango (2011) Directed by Gore Verbinski. Rango is an upcoming computer-animated film and features the voices of actors Johnny Depp, Isla Fisher, Bill Nighy and Abigail Breslin. A chameleon that aspires to be a swashbuckling hero finds himself in a Western town plagued by bandits and is forced to literally play the role in order to protect it.

Nemesis (2009) Written and Directed by Stian Hafstad. Nemesis is a Norwegian short film made by students at the University of Bergen. It tells the story of Arne (Trond Gil), who is convinced he has superpowers. He just hasn't found them yet. So he decides to put up a wanted note for an arch-enemy, hoping that it will help him discover his true powers. Their names are Omega and Captain Phoenix...

Signs (2008) Directed by Patrick Hughes (Red Hill 2010). Written by Patrick Hughes, Karl Fleet and Nick Worthington. "Signs" is an award winning (Cannes Lions 2009) short film from Australia. As for what it's about, you'll just have to watch... :-)

"Jack Goes Boating opens with two friends who are New York limo drivers. Jack (Hoffman) is a reclusive bachelor, and Clyde (John Ortiz) and his wife Lucy (Daphne Rubin-Vega) are just about his only friends. He has a paralyzing shyness around women, so Lucy fixes him up with her friend Connie (Amy Ryan). Lucy and Connie work in phone sales for a funeral parlor. The first date ends promisingly, with Jack asking for and receiving "a little good night kiss." Their next big date involves Jack cooking dinner for them all at Clyde and Lucy's apartment, and it goes about as badly as possible - through no fault of theirs." - Roger, from his 2010 Sundance entry: "Of the feel of theaters and audiences, and eight films at Sundance." Jack Goes Boating (2010) Philip Seymour Hoffman in his feature directorial debut. Starring John Ortiz, Daphne Rubin-Vega, Amy Ryan and Philip Seymour Hoffman. Screenplay by Bob Glaudini who adapted his Off Broadway play for the screen.

From the Big Kahuna: Although digital may have replaced film in the making of home movies, these valuable tips from Robert Benchley still apply.The Grand Poobah writes: "Man! I want me some more commercials like this! Black and white and starring Al Pacino."Marie writes: A great film is always worth mentioning again...

"Tarsem made one of the most astonishing films I have ever seen. It is all the more special in this age of computer-generated special effects, because we see things that cannot exist, but our eyes do not lie, and they do exist, yes, they really do." - RogerThe Fall (2008) Directed by Tarsem. Written by Dan Gilroy, Nico Soultanakis and Tarsem. Starring Catinca Untaru (she was at Ebertfest 2009 for the film's screening) Lee Pace, Leo Bill, Daniel Caltagirone and Justine Waddell. A picture is worth a thousands words. Now multiply that by more than you can count, and you might get close to describing The Fall. Or you can read Roger's review of it over HERE.

"The Fall is one of my all-time favorite films and because it contains some of the greatest cinematography I've ever seen. Colin Watkinson was the man behind the lens, and while there's more to the movie than just images (I also loved the story) there's a richness to the opening B/W sequence worthy of Ansel Adams. It literally caught my breath. I didn't remember to breathe again until I noticed I was feeling dizzy and even then, at first I thought it was movie doing it." - Marie, who never tires of discussing Cinematography.

MURDER! (1930) Directed by Alfred Hitchcock. Reportedly the first feature-length British sound movie (the earlier Hitchcock film Blackmail starting-off as "silent" before switching to sound during production.) Synopsis; an actress in a traveling theater group is murdered and Diana Baring (Norah Baring), another member of the group is found suffering from amnesia standing by the body. Diana is tried and convicted of the murder, but Sir John Menier (Herbert Marshall) a famous actor on the jury is convinced of her innocence. Sir John sets out to find the real murderer before Diana's death sentence is carried out. The film can seen in its entirety below. (Hosted on Internet Archives: Public Domain.)

The Woman in Green (1945) Directed by Roy William Neill. With Basil Rathbone, Nigel Bruce, Hillary Brooke. A serial killer appears to be on the loose in London and Sherlock Holmes assists Inspector Gregson of Scotland Yard in the investigation. Holmes is brought into the case when Maude Fenwick asks him to investigate her father, Sir George Fenwick, who has been acting very oddly of late. Holmes had seen him in a hotel bar a few nights before with a very attractive and mysterious woman. The film can be seen below in its entirety. (Hosted on the Internet Archives. Public Domain.)

Which finally brings us to the GREATEST crime fighter of them all...! And let this serve as warning to those dreaming of a life in show business. :-)Based on the Club's original July 14, 2010 Newsletter.