The Strange Case of "The Other Side of Midnight"

In the spring of 1977, 20th Century Fox was preparing a surefire hit for release. It was based on a best seller, and from a genre that had been popular for decades. It had an international cast, and boasted shooting locations from all over the world. The studio was so sure of this picture’s success that in order for theaters to get the print they had to agree to take a two-bit sci-fi junker as well. Well, “The Other Side of Midnight” went on to open and die at the box office and become a tough question for trivia night. The sci-fi junker named "Star Wars" that 20th Century Fox had no faith in, or idea how to sell, went on to change Hollywood.

The failure of "The Other Side of Midnight" is more interesting than it may initially seem. It also goes against the oft-told tale that “Star Wars” destroyed New Hollywood, as “Star Wars” was from one of its founding members, George Lucas. And, "Star Wars" audiences weren't rejecting complex adult stories for escapism. Rather, they were rejecting an exhausted, tacky adaptation of a potboiler for a strangely personal space opera, one that incongruously mixed elements of "Flash Gordon" Serials, WWII dog fight movies, and samurai films—and made them all work. 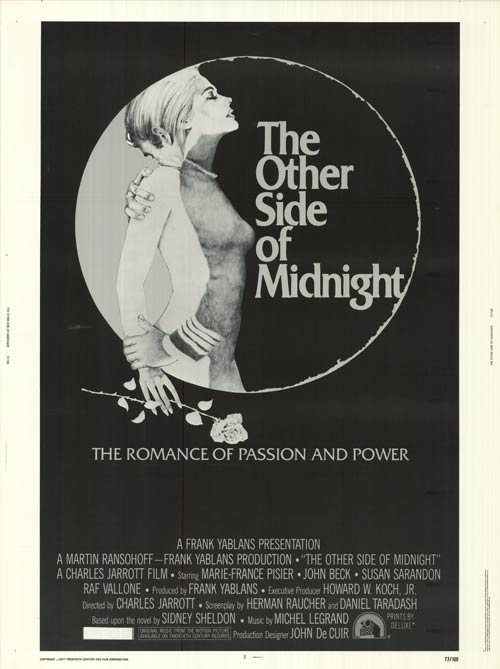 First, the strange case of “The Other Side of Midnight," which was based on a novel by Sidney Sheldon. Director Charles Jarrott's adaptation told of a tragic love story set during and immediately after WWII. An American pilot stationed in France named Larry (John Beck) loves and then leaves the young Noelle (Marie-France Pisier), who soon becomes a great actress. Later on, he marries an American woman named Catherine (Susan Sarandon). Noelle pulls some strings for the pilot to fly her personal plane. The actress’s jealous, incredibly wealthy lover, the Greek tycoon Constantin Demeris (Raf Vallone), doesn’t take kindly to this. The story falls together in that classic heavy-breathing Sheldon style, of desperate couplings by fireplaces and ill-advised, self administered abortions.

It would be churlish indeed to take “The Other Side of Midnight” to task for its dialogue and trashiness, but it’s instructive to look at the saving graces it didn't have compared to "Star Wars." Like many big studio movies of the era, for "The Other Side of Midnight," a sprawling international cast means nobody is really acting in the same movie with anybody else. It’s a mix of soon-to-be big Hollywood starlets, arthouse imports, and old hams. Nobody is in tempo. In comparison, the "Star Wars" core trio of Mark Hamill, Harrison Ford, and Carrie Fisher have terrific chemistry. Their in-tune sparring back and forth ably patches over the dodgier bits of dialogue.

“The Other Side of Midnight” also looks cheap in that way only expensive studio flops can, suggesting with every frame that nobody had any idea how to spend the money. It’s over-lit so the makeup looks chalky, and the gilt of Old Europe looks like the gold foil from a variety show set. Meanwhile, Lucas pulled together some of the best production people in their fields. He started a special effects firm, Industrial Light and Magic, because it would be cheaper to do all the effects work in-house than farm it out. The result was a sci-fi film with incredibly cohesive world building. Nor does "Star Wars" forget to be full of lived-in details either, right down to little touches like Luke’s hover-car being an absolute beater.

In regards to the crucial element of the music, the films vastly differ. Michel Legrand’s ultra-lounge romanticism was utterly wrong for “The Other Side of Midnight’s” tragic love story, which required something like the heartbreaking score by Miklós Rózsa in “The Private Life of Sherlock Holmes.” (Legrand’s overbearing, syrupy score is great to play at your next fondue party, as it all but screams “1977” playing over a story set just after WWII.) On the other hand, it’s impossible to picture “Star Wars” without John Williams’ contribution to it. Very often they give the images that key breath of life. The music turns a simple scene of watching a planet’s two suns set into pure enchantment. 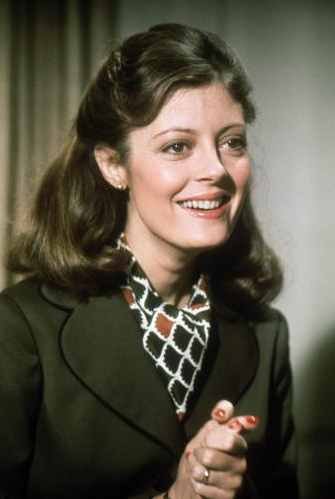 And yet the two films aren’t quite as dissimilar as they appear. They’re both examples of the seventies vogue for nostalgia, something New Hollywood traded in regularly. From neo-noirs like “Chinatown” to coming of age stories like Lucas’ own “American Graffiti," the recent past was explored in numerous ways by filmmakers.

In fact, “Star Wars” is just a much a period piece as "The Other Side of Midnight," but with a more productive sense to its nostalgia. The latter’s iconic title card reminds us this is all taking place “A long time ago, in a galaxy far, far away.” Furthermore, “Star Wars’” base DNA is the thirties "Flash Gordon" serials Lucas couldn’t get the rights to make into a feature film. Mixing in every nostalgic influence from "The Dam Busters" to "The Hidden Fortress," Lucas found a way to take the stories he had loved growing up and turn them into a common dream for audiences; the lure of wanting adventure, or that more was out there beyond your front yard, and out there were worlds of sentient machines and sand dunes littered with the bones of huge monsters. “Star Wars” was a nostalgic film Lucas clearly wanted to make—“The Other Side of Midnight” was a period movie 20th Century Fox was hoping would make them a good deal of money.

There is plenty to question or criticize about what “Star Wars” wrought, but in May of 1977, it was Lucas figuring out how to make nostalgia seem futuristic by taking it into space. It was a sign that event movies would truly have to be Events, and a warning that the era of the big expensive best seller adaptation was ending. It was also a reminder that you can’t engineer a hit or a cultural watershed moment. The odd, strangely dour trailer for “Star Wars” serves as an excellent witness for that statement—Fox’s discomfort and bafflement with the picture is all too apparent as a voice-over more appropriate to a horror film trailer somberly intones, “The story of a boy, a girl, and a universe.” The studio put their faith instead in “The romance of passion and power," and were quite surprised to learn that audiences preferred their melodrama to have lightsabers in it.

For good or ill, we’re in a post-“Star Wars” world. It’s tempting to ponder what would have happened had “The Other Side of Midnight” been the huge hit Fox was expecting. And if “Star Wars” had gone on to fill various channels late movie slots, it’s possible eighties blockbuster fever wouldn’t have gone on to erase the concept of a mid-budget film, leaving us hip-deep in remakes, reboots, sequels, and this year’s model of a terrible "Fantastic Four" film. But it’s also unfair to pin the current state of mainstream Hollywood on “Star Wars"—Lucas cared about making a good film in 1977. He wanted to somehow have a story big enough to include nods to Akira Kurosawa and Fritz Lang, and succeeded, tremendously so. If there’s a lesson worth rediscovering, (and one I hope to hell “The Force Awakens” has already taken to heart), it is to care about the story you’re telling—no matter if it’s set in the present, post-war Europe, or Tatooine.