On "Tess", Now Out in a Beautiful Blu-ray Edition from Criterion

Being of Polish extraction and possessing a worldview that could be rightfully described as sometimes leaning towards the dark and cynical, I have always felt a natural affinity towards the films of Roman Polanski. And if I were forced to select one of his films as my favorite, I would not hesitate for a second to name what continues to be, at least on the surface, the most idiosyncratic work of his career, his 1980 knockout "Tess." At the time that it was being produced, the idea of Polanski lending his dark cinematic approach to a period adaptation of Thomas Hardy's tragic 1891 novel "Tess of the d'Urbervilles," seemed like a bizarre and ultimately doomed move from a filmmaker reeling from a series of personal and professional disasters stemming from an incident that, in the interest of saving space, will receive no further lucubration here. Therefore, critics and audiences alike were surprised to discover that Polanski had presented them with a film that was both a fairly faithful adaptation of the source material and a deeply personal work that told its dark tale with a powerful emotional undercurrent that he had never demonstrated before and which he would not approximate again until he made "The Pianist" two decades later.

Although distributors were initially wary of the film—it took more than a year after its European debut before it was picked up for American release—"Tess" went on to be a surprise hit, despite its seemingly uncommercial nature, that earned Polanski some of the best reviews of his career and won three Academy Awards out of six nominations. And yet, when Polanski's work is up for discussion, the focus tends to fall mostly on the films leading up to and including "Chinatown" as well as "The Pianist," the one that earned him his long-overdue Best Director Oscar, with "Tess" too often falling by the wayside. In the last couple of years or so, however, there has been a new and welcome focus on "Tess" and its accomplishments. 2012 saw the debut of an extensive 4K restoration that was justly acclaimed, and this week sees the Blu-ray debut of that version via the Criterion Collection in an extensively detailed set that also includes a 2006 retrospective documentary, archival interviews with Polanski and key members of the cast and crew and a second documentary on its production produced for French television during its filming. The end result is a beautiful package—one that will almost certainly go down as one of the best Blu-ray's of the still-young year—that will hopefully help to cement the film as both Polanski's crowning achievement to date and one of the great literary adaptations in screen history. 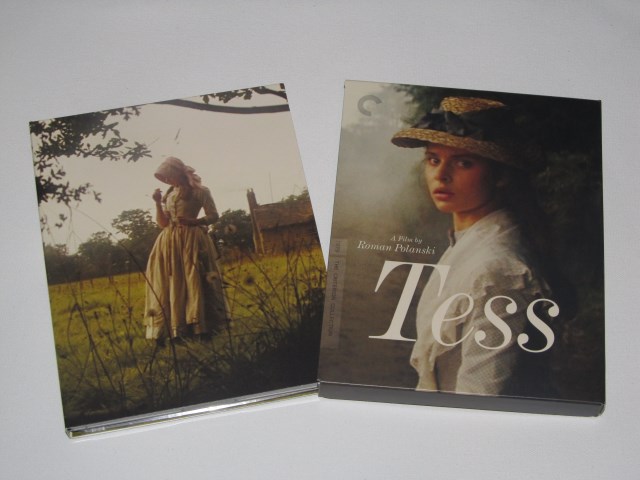 "Tess" tells the story of an ordinary peasant woman whose presumably simple and uneventful life is utterly destroyed because of nothing more than a chance encounter between two other people. Set in a rural area of Dorset, the story begins as village drunk John Durbeyfield is walking home when he crosses paths with a pastor who insists on calling him "Sir John." The reason for this, the pastor reveals, is that while pursuing his hobby of studying local family trees, he discovered that the Durbeyfields are descendants of the noble d'Urberville family. Elated beyond reason, Durbeyfield races home to share the news with his family and a plan is hatched—they will send their beautiful daughter Tess (Nastassja Kinski) off to visit a nearby branch of their hitherto unknown relations as a way of introduction and, hopefully, to secure some portion of their wealth.

Needless to say, this plan goes sour almost instantly. For starters, it turns out that this d'Urberville branch is not an authentic relation—they actually purchased the title a few generations earlier. After she makes the acquaintance of family heir and pseudo-cousin Alec (Leigh Lawson), he becomes instantly besotted with her and, in one of the great seduction scenes, attempts to win her over with the help of an especially juicy strawberry. She rebuffs his constant advances but one night, he forces himself upon her and she becomes pregnant as a result. Tess flees, despite Alec's marriage proposal, and eventually gives birth. But the child dies soon after, leaving her alone and no longer marriage material in the eyes of polite society. Now a near-penniless laborer, she meet Angel Clare (Peter Firth), a parson's son who not only falls instantly in love with her but idealizes her as pure and virtuous beyond measure and soon proposes marriage.

Tess tries to admit her checkered past to Angel on several occasions but a combination of his unwillingness to hear what she is saying and the whims of fate ensures that he does not learn of her sexual past or her dead child until their wedding night. Despite having a past indiscretion of his own, Angel is hypocritically appalled by the revelation and abandons Tess right then and there. She goes back to her family and after a few years, she finally decides to take Alec up on his still-standing proposal, if only to provide some kind of security for them. It is an unhappy marriage but when a now-contrite Angel arrives in order to beg forgiveness for his behavior, she tearfully sends him away. When Alec cruelly mocks her emotional response to Angel's arrival, she finally takes a stand with fatal results.

The problem with a lot of screen adaptations of classic literary properties is that too many of them fail to figure out a way of translating the material into cinematic terms. They can replicate the dialogue and the sets and the costumes easily enough, but unless they figure out how to convey the author's voice in a visually and dramatically interesting manner as well, all that the filmmakers have in the end for their efforts is little more than an elaborate book report that knows the words but not the music.

For Polanski, "Tess" was a deeply personal endeavor dating back to 1969, when Sharon Tate had given him a copy of the book, her favorite, a few months before her death, and he promised to one day make it into a film for her. (The film bears the heartbreakingly simple dedication "For Sharon.") Over the subsequent decade from that point until production commenced, he clearly worked hard to figure out how to put it up in a way that retained Hardy's voice while still making it his own. He and co-screenwriters Gerard Brach and John Brownjohn succeeded magnificently in this regard. Instead of rushing from incident to incident, as is often the case with adaptations as filmmakers try to cram in as many key points as a commercially viable running time will allow, Polanski allows scenes to develop at their own pace and places just as much of a premium on the silences as on the words. (The pause before Angel reacts to Tess's confession of her past is so painful to bear that we cannot help but feel exactly what she is going through at that exact moment.)  During the moments in which the film strays from the book, most obviously in its denouement, the results fit in so perfectly with their surroundings and seem so obvious and inevitable that one wonders why Hardy didn't come up with them in the first place. 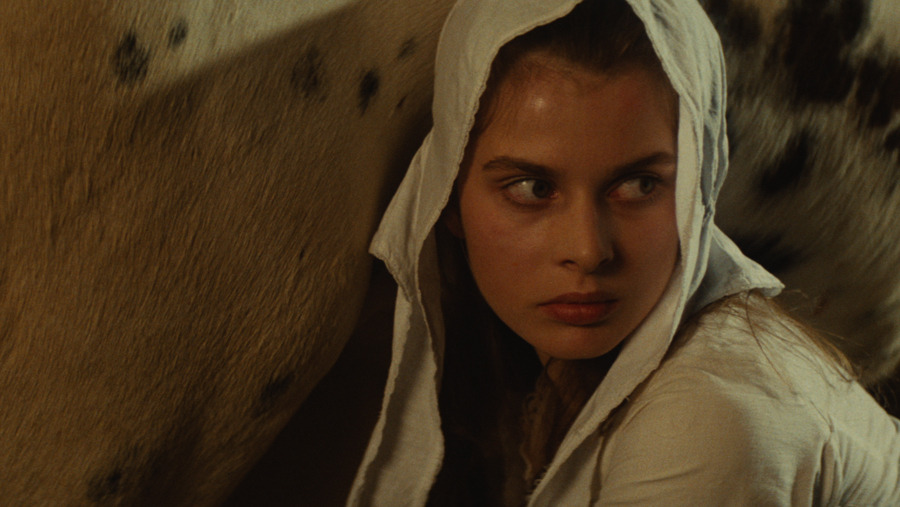 Most significantly, "Tess" is of a piece with much of Polanski's filmography because this is a film about a woman who is cruelly victimized by the world around her but who is unwilling to simply become a victim. Many of his more notable films have centered on such characters—"Repulsion," "Rosemary's Baby," "Chinatown," "Death and the Maiden"—and there is something about this type that he clearly sympathizes with. He is unable to simply depict them as mere victims. Even when the fates are against them, and that is certainly the case with Tess, he admires the strength they summon to carry on—even as Tess is being led away to her eventual meeting with the gallows in the finale, the image is one of resilience and not of weakness and despair. Because of this, some have read "Tess" as a sort of cinematic mea culpa for his own transgressions and while I can understand how some could look at it in such a light, doing so strikes me as an absurd simplification of both a complex incident and a complex story.

Beyond Polanski's efforts, the most significant element to the success of "Tess" is the stunning performance by Nastassja Kinski in the lead. As a sixteen-year-old German girl with only a couple of minor credits who was best known for being the daughter of wild man Klaus Kinski and Polanski's lover, few might have expected much from her but she more than delivered with a performance that made her an international sensation. Of course, part of that was due to her extraordinary physical presence—I am still convinced that she is the single most beautiful woman to ever step in front of a movie camera—but what she does here is more than just an extended modeling job. As Tess moves from incident to incident, Kinski finds just the right note each time out and after a while, she simply becomes the character to such a degree that the film almost takes on a documentary-like feel. (Even her occasionally dodgy British accent winds up working for her in the sense that it helps to underscore that Tess, no matter how she tries, will always be a bit of an outsider in this world.) This is stunning work throughout and it makes one wish that someone would once again give Kinski, whose career would eventually run the gamut from fascinating box-office flops like "One from the Heart," the remake of "Cat People" and "The Moon in the Gutter" to direct-to-video junk and European productions that would never make it across the pond, the kind of meaty role that would allow her to shine as she does here. (One that did was Michael Winterbottom's underrated 2000 film "The Claim," itself based on another Thomas Hardy novel, coincidentally enough).

Impeccably directed, beautifully performed and visually ravishing (original cinematographer Geoffrey Unsworth died a couple of weeks into filming and was replaced by Ghislain Cloquet—both would subsequently win the Best Cinematography Oscar), "Tess" was a masterpiece the moment it was released, and, as a new viewing of the Blu-ray will confirm, this is a position that has only strengthened in the ensuing years. For those who have seen it before, looking at it again will be akin to once again dipping into a favorite book and finding that it has grown in richness and resonance since that initial encounter. For those who have never experienced it before, be prepared for a truly unforgettable cinematic experience.