It’s not surprising to me that "Straight Outta Compton" raked in over $60 million during its opening weekend and held the #1 spot for a second week. Nor is it surprising that the film has been criticized for glossing over how the radicalization of black men often goes hand-in-hand with the denigration of black women. But there's another, unintended side effect of this film's success: it should make us consider forgiveness, and who gets to access it.

"Straight Outta Compton" throbs with an undercurrent of violence and anger that pushes sharply against the narrative of post-racial ignorance far too many people took comfort in at the time. Director F. Gary Gray captures it all brilliantly and vibrantly; I nodded my head when Eazy-E seethed after the Rodney King verdict, remembering how confusing and infuriating it was that every officer was acquitted, and I got chills when Ice Cube defiantly signaled the rest of the crew to play “Fuck Tha Police” in Detroit after a police warning resulting in their arrest.

But this emphasis also amounts to a revisionist history of the group's timeline, leaving out the prominent, complicated issue of N.W.A.’s violent misogyny. Their lyrics made it clear that women were nothing more than “bitches” and “hos,” and scenes in the film show the women in the lives of these rappers as either overbearing mothers or half-naked sexual props. Sure, Ice Cube brought his wife to a business meeting, and she appears again later to momentarily commend him for working on the screenplay for "Friday," but those moments are fleeting; they skip ahead to Dr. Dre meeting his wife Nicole in 1996, but leave out how he famously assaulted journalist Dee Barnes in 1991, or that longtime girlfriend and artist Michel’le went on the record to accuse him of breaking her nose and ribs during the six years they were together. In the parlance of Black Lives Matter, social justice initiatives like #SayHerName remind us that black women suffer, too. We’re still doing the heavy lifting of trying to convince people that within the wheel of racism all people of color suffer, but with the added layer of misogyny, women still have it worst. The troubling question is: Why can’t we focus on saving the lives of black men and black women at the same time? 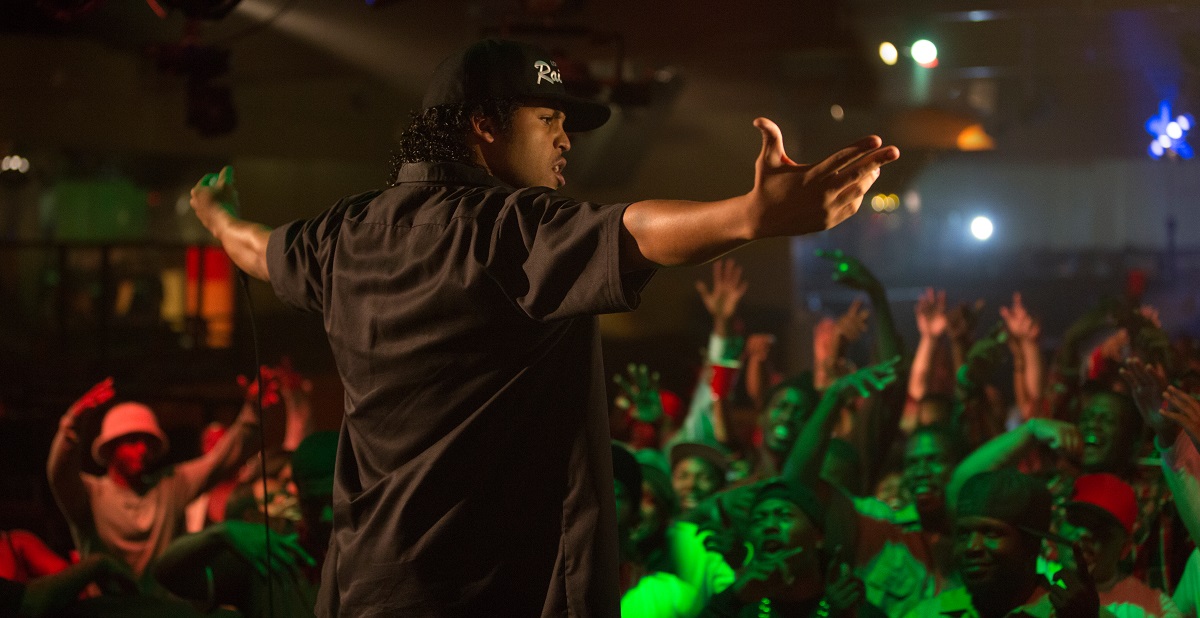 But there’s something different that connects blackness, violence and misogyny. If you look at violence as a symbiotic relationship, it’s easy to see the map of how some black men being brutalized by the police end up brutalizing women. Assata Shakur and historian Robin Spencer each wrote about the domestic violence women in the Black Panther party suffered; Eldrige Cleaver once theorized that women’s bodies were a reward for political success. People were breaking their own arms to write about the genius of Chris Rock’s 2014 film Top Five without a passing glance to the fact that most of the women in it are referred to as hoes, reporter Chelsea Brown (Rosario Dawson) has to write under a pen name when she addresses “fluffy women’s stuff,” and Rock’s bodyguard Silk (J.B. Smoove) sexually harasses every woman that walks within a twenty foot radius. Rock also makes an appearance on Kanye West’s song “Blame Game,” where he compliments a woman for taking her “pussy game to a whole other level” on his birthday. Black women’s bodies are often treated as a reward for black men’s existence.

When Dee Barnes wrote about "Straight Outta Compton" from her own perspective for Gawker, she made a startling connection: F. Gary Gray was behind the camera and was responsible for filming the Ice Cube interview that Dr. Dre cited as justification for assaulting her. When Barnes auditioned for a role in the 1996 film Set It Off, she was told by the director—F. Gary Gray—that he couldn’t cast her because Dr. Dre was going to play the role of Black Sam. It’s also recently come to light that there was a scene about the Barnes attack in the film, but it was cut. Dre, who pleaded no contest to attacking Barnes and was given probation, issued an apology to Barnes yesterday, twenty-five years later; during that time, Gray built a solid career alongside Dr. Dre while Barnes worked nine-to-five jobs to make ends meet. Ice Cube remains unrepentant about how he talks about women, appearing to have learned nothing at all. "If you're a bitch, you're probably not going to like us," he says. "If you're a ho, you probably don't like us. If you're not a ho or a bitch, don't be jumping to the defense of these despicable females. Just like I shouldn't be jumping to the defense of no punks or no cowards or no slimy son of a bitches that's men. I never understood why an upstanding lady would even think we're talking about her."

That Kanye West co-produced "Top Five" offers more confirmation of how men in the entertainment industry find ways to support each other at the expense of women. It also suggests that this "hard" attitude towards women is learned, not necessarily innate to men of a particular upbringing. Unlike the former members of N.W.A, West was raised by a middle-class academic woman. Rock's father is a newspaper deliveryman, and his mother a teacher and social worker mother, and he has daughters of his own that he speaks of fondly. Neither had to buy into the denigration of women as wholly as they seem to, but both still found ways to flex their misogynist muscles to reaffirm their masculinity. 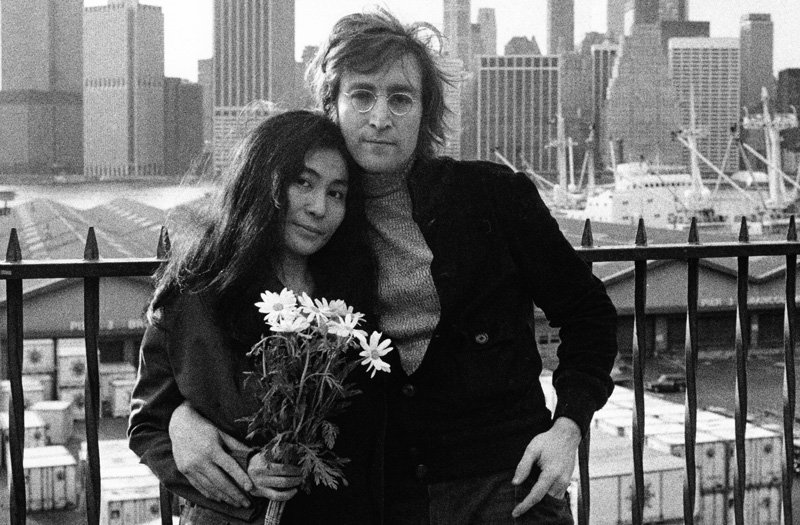 Black artists aren't the only ones who do this, though. The justified criticisms of "Straight Outta Compton" shouldn't blind us to that fact. Comments made in their recent interview with Rolling Stone make it hard to believe that N.W.A. has changed their tune. But even if they did, would it matter, in the way that it has mattered for white artists?

Most people don’t know or have conveniently forgotten that John Lennon used to beat his first wife, even though the lyrics for the upbeat “Getting Better” point it out rather plainly: “I used to be cruel to my woman I beat her and kept her apart from the things that she  loved / Man I was mean but I’m changing my scene” Did Lennon get to be the Subdued Hippie Dream Prophet because he later admitted he was wrong?

The Beastie Boys definitely changed their scene—all have become outspoken proponents of feminist issues, including this speech by Adam “Ad Rock” Horovitz at the 1999 MTV Awards about the way women were groped and assaulted at the Woodstock festival that same year. The Beastie Boys grew up, and we rewarded them for it by forgetting they once had a song imploring women to do the dishes, clean up their rooms, do the laundry, and clean the bathroom.

There’s also a heavy double standard that cloaks these issues of sexism, misogyny and racism entirely, and it’s rooted in the historically inaccurate persecution of black men as sex-crazed maniacs. The macho posturing running rampant in the business  galvanizes the idea that women are worthless, and this is not just a problem afflicting black artists. As writer Zeba Blay points out, rappers aren’t the only musicians that have demeaning lyrics and videos.

Did anyone consider Led Zeppelin’s “shark episode” when they were inducting them into the Rock and Roll Hall of fame, or the fact that guitarist Jimmy Page was dating a 14-year old girl? Motley Crue’s 2001 autobiography, The Dirt, reads like a rap sheet of depravity, including a rape that was explained away by the presence of drugs and alcohol. Motley Crue were at the height of their popularity in 1987 when they released the album “Girls, Girls, Girls”; the titular song documents the band’s favorite strip clubs across America, and opens with the idea that sex workers are necessary to make singer Vince Neil’s Friday night complete.

There’s a panic about the casual sexism in "Straight Outta Compton" that translates to real life, but when we call it out, we shouldn't forget that white artists are afforded certain privileges that N.W.A. is not.

I’m not saying that it was a good idea to glamorize N.W.A. in "Straight Outta Compton," but it does seem that black artists get punished disproportionately when compared to other parts of pop culture. No one is saying that N.W.A. shouldn’t be held accountable for their deplorable treatment of women—it just pays to look at the systemic issues that made it possible in the first place.