The historical weight and dramatic importance behind the true story of "Muhammad Ali's Greatest Fight" feels like the stuff of great TV drama. An Oscar-winning cast and a notable director were assembled to tackle this chapter of the fight for not just one man's freedom but the statement it would make about religious expression and conscientious objection altogether. And yet the result is so remarkably inert; so sterile when the story demanded a tone as passionate as the man who gave it a title. Intercutting his film with archival footage of Ali himself was clearly designed to amplify the core of Shawn Solvo's script but it merely illustrates the deep flaws in storytelling here.

As he rose to fame in the '60s, Cassius Clay became one of the most popular athletes in the world, a man who could tackle any opponent in the ring and was quickly becoming more than just a boxer; he was a cultural icon. When he changed his name to Muhammad Ali and joined the Nation of Islam, he crossed the law by refusing to be drafted in the U.S. military to fight in the Vietnam War on the basis of his religion. Even though he proclaimed that his beliefs disallowed him from combat as a conscientious objector, his title was stripped and he was threatened with jail time. The case went all the way to the United States Supreme Court, and, while many criticized him at first, the world changed in the four years it took to make that journey. By the time the court was to vote on whether not to hear Ali's case in 1971, the Vietnam War was being questioned to its very core, and the beliefs of all who opposed it, along with all who wanted to express religious freedom, became entangled in the case. 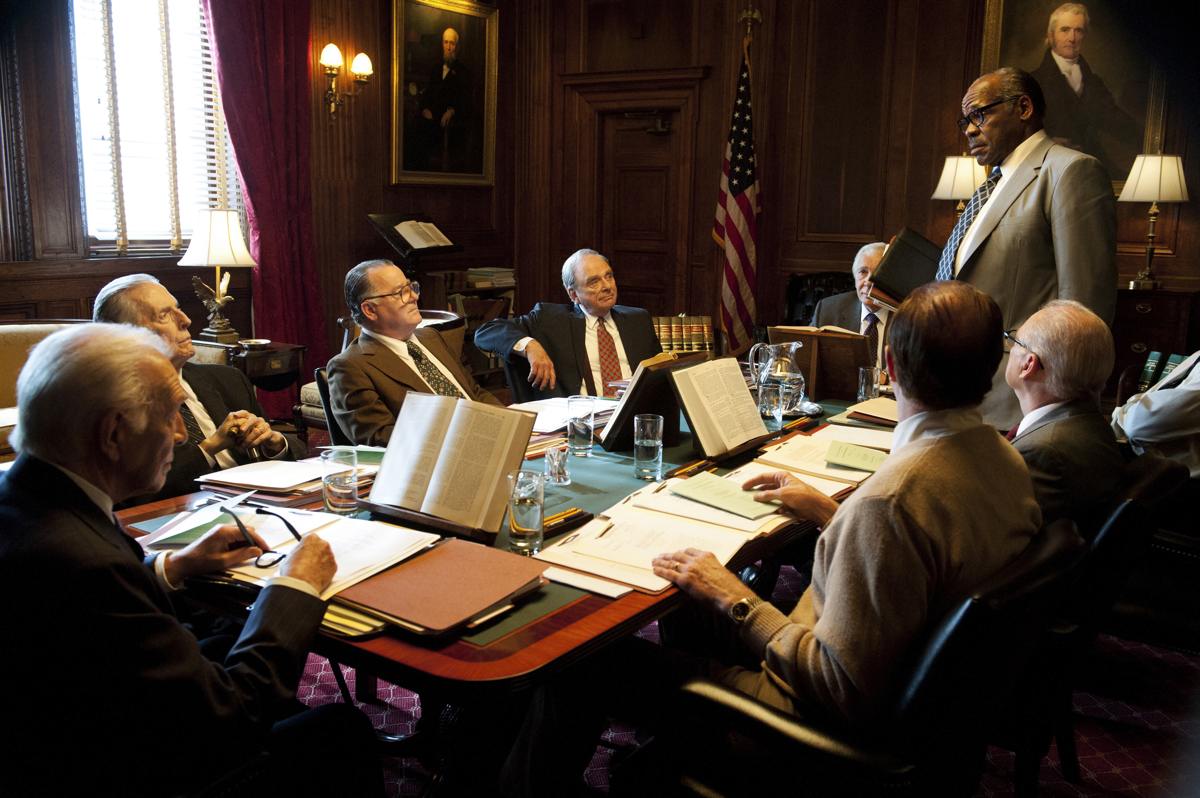 Ali's appeal reached a court led by the Nixon-appointed Chief Justice Warren E. Burger (Frank Langella), who worried that hearing it would set a precedent that anyone could avoid the war purely by joining a religious group. As a justice says in the film, "There will be no more soldiers left to fight Nixon's dirty war." And yet no one on the court wanted a ruling in a specific case like Ali's to serve as a judgment on the entire conflict. And so the justices at the time—Hugo Black (Fritz Weaver), William O. Douglas (Harris Yulin), John Harlan II (Christopher Plummer), William Brennan Jr. (Peter Gerety), Potter Stewart (Barry Levinson), Byron White (John Bedford Lloyd), Thurgood Marshall (Danny Glover), and Harry Blackmun (Ed Begley Jr.)—navigated a legal and social minefield in even considering Ali's case in the first place.

With all of these historically and culturally important characters from which to choose, writer Shawn Solvo surprisingly turns to Justice Harlan's new clerk, Kevin Connolly (Benjamin Walker), to serve as the protagonist of the film. Clearly meant to represent a new generational way of thinking about the war and freedom of religious expression, Connolly butts heads with Harlan as it looks increasingly like the court will come down on the wrong side of history. His new boss leans at first to the idea that Ali's incarceration is justified under the legal argument that he would fight in a Holy War for his religion and, therefore, cannot pick and choose his battles. But Connolly keeps pushing for a deeper appreciation of the many social and cultural issues underneath the legal ones. 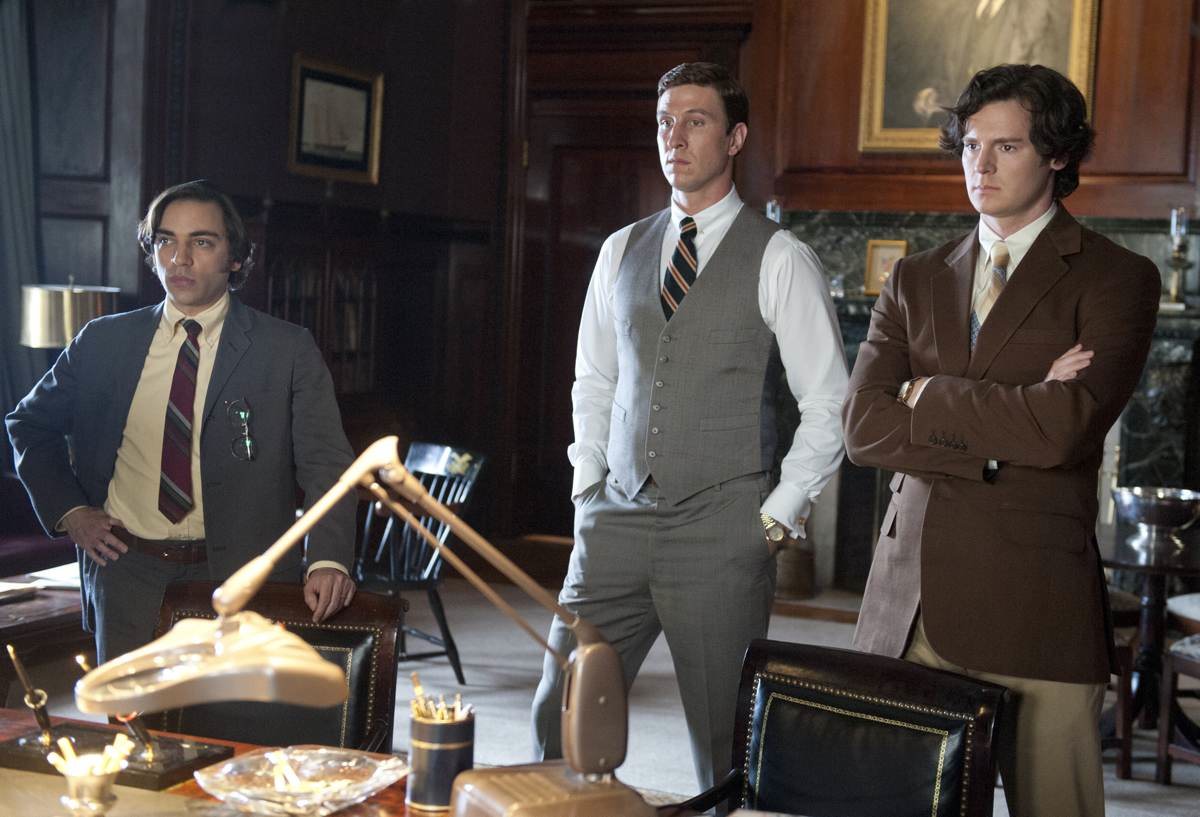 To say that using Connolly as the protagonist for "Muhammad Ali's Greatest Fight" is an unusual choice would be kind. Walker is not particularly bad but the character never registers as anywhere near as engaging as those around him. The film has a problem not unlike the ones faced by "Me and Orson Welles" or "My Week with Marilyn" in that the protagonist never engages the viewer as completely as the household name in the title. Forget the fact that Ali himself is never seen other than in mesmerizing archival footage, but men like Warren Burger and Thurgood Marshall are legends as well. Why must we always see narratives like this through a young man's eyes? Why couldn't we get to know the justices or, perhaps best of all, merely spend time in those heated discussions à la "12 Angry Men"? There's a scene late in the film in which the two sides of the issue are being discussed passionately in judges' chambers and it hints at what "Greatest Fight" could have been: A film that captured the legal battle at the U.S. Supreme Court like a verbal/political boxing match instead of from yet another outsider's perspective, a screenwriting crutch that almost never works.

It doesn't help Frears' film that the archival footage of Ali himself is about as captivating as any you'll see in a film like "Muhammad Ali's Greatest Fight." The man steals the movie, even though Langella and Plummer can't be blamed for being given roles that simply don't seem to challenge them too much until their characters are forced to start yelling at each other in a way that seems unlikely to have really happened. There's an interview near the end of the film in which we hear Ali's response to the case and it's the most interesting scene in the film. I wanted more of the interview, more Ali.

The best thing that could come out of "Muhammad Ali's Greatest Fight" is a desire by viewers unfamiliar with Ali to learn more about how he was more than merely an athlete. If it leads people to great documentaries like "When We Were Kings" or even just starts conversations about the importance of the Supreme Court in our current time of broken government or the importance of having laws that are enforced equally across race and religion then I suppose it's done some good. I just feel disappointed that such an important and perhaps underreported story didn't receive a film that did it justice on its own.