"It's Peckinpah-tastic!": On Edgar Wright's Feature Debut, "A Fistful of Fingers"

Long before “Baby Driver,” “Scott Pilgrim vs. the World” or breakout film “Shaun of the Dead,” writer/director Edgar Wright was just a young 20-year-old filmmaker who wanted to make a feature film with his most immediate resources: a camera, some friends, some cowboy hats. In 1995, he made his feature debut with the rare spaghetti western spoof “A Fistful of Fingers." It played a single screen during its initial release and has only received a handful of special screenings since then, all while Wright has ascended to become one of the filmmakers in the game.

“A Fistful of Fingers” received its second screening in the United States this past June at Chicago’s Music Box theater, who presented a very clean restoration of the movie by Wright’s personal request during a festival in his name. Wright introduced the movie himself via a brief video, sharing the history of how it played not in cinemas but “in cinema,” and introduced us to the kitschy wonders of the MilkyBar mascot, one piece of "British ephemera" that makes its way into "A Fistful of Fingers" for a huge comedic pay-off. Wright also shared the idea that he wanted to make a feature when he was really young, just like Orson Welles did with "Citizen Kane." A "Citizen Kane" of ruthlessly goofy debuts, “A Fistful of Fingers” is the dawn of a filmmaker who thinks primarily in how to make a movie consistently gripping in the cinematic sense.

The screening was pre-packaged with interviews about an even younger Wright working on small projects: a stop-motion animation project that won him a camera; the short that followed in which he used said camera to make a horror-comedy about his friend unable to run away from the first-person POV camera that terrorizes him. For both of these shorts, introduced by footage of a giddy young Wright being interviewed on some local hip talk show, the values remained the same: elemental filmmaking in which a camera and an edit are the primary tools of cinema. 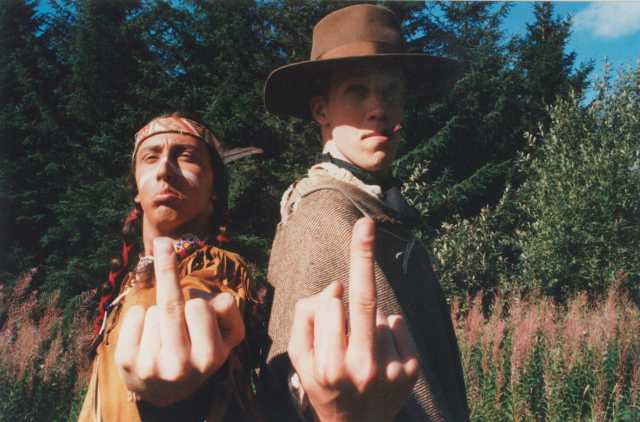 As noted by Tony Zhou’s incredible “Every Frame a Painting” video essay on Wright’s career that would follow, the filmmaker is one of the best working today for his allegiance to camera work and editing to convey story and comedy. A lot of Wright’s work gets information or comedy across without dialogue but the same elements of pure cinema that he would have had in 1995 with little budget and a camera: shot composition, editing, and an inspired idea. In the case of “A Fistful of Fingers,” Wright chose the Sergio Leone aesthetic, which already comes packaged with some basic visual ideas: snarling close-ups, rising scores, quick edits between drawn-out stand-offs. Like with how he tackled zombie lore in “Shaun of the Dead” or the end of the world with “The World’s End,” the genre requirements became a type of sandbox for Wright and his fellow young collaborators.

The production for “A Fistful of Fingers” is essentially a group of British kids goofing on American tropes while making a movie on a location that looks like a hiking trail. Its story involves a cigar-chomping, squinting Clint Eastwood-like character (played by Graham Low, who sounds more like Dirty Harry than The Man With No Name) hunting an outlaw named The Squint. Joining Walter along the way is a Native American named Running Sore (Martin Curtis, in cringing brown skin make-up and with a deep voice), as the story becomes a type of buddy journey as they run into various people along the way (including more outlaws) and stumble upon some treasure. Characters pretend their riding real horses a la “Monty Python and the Holy Grail,” and numerous cheap jokes abound for Native American and Mexican characters that Wright might have thought were ironic (which might be one reason the film is slow to wider public release). Start to finish, the movie is delightfully dorky, irreverent and scrappy, the exact kind of project a young filmmaker would make if they just wanted to make fellow nerds laugh and were pretty good at doing so. 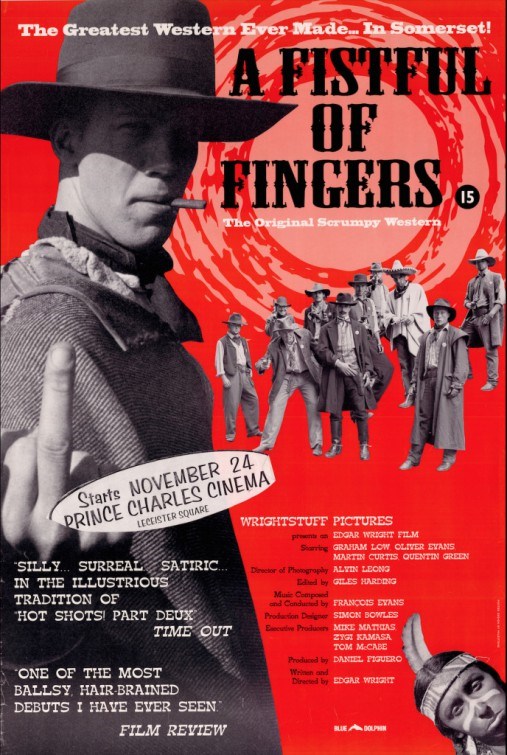 To be more fair to the script that Wright wrote for it, “A Fistful of Fingers” is more of an extensive list of gags that takes place in a western setting. And while his jokes display a zippy eye for a gag, his pacing as a story completely suffers from it. But it's all in the vein of Monty Python, the Zucker brothers, cartoons, and Mel Brooks, functioning like a micro budget take on “Blazing Saddles.” Wright’s movie is full of the same anachronistic, pun-filled, zippy humor you’d get when mixing them all together. I can’t do the jokes justice, but I can share a few premises that lead to big laughs: A revolver showdown that turned into finger guns and then a spitting contest; a play on the phrase “none shall pass” involving nuns, a sports commentator interjecting that the bang-bang-shoot-'em-up climax of the movie was “Peckinpah-tastic!” Wright himself appears in the film, as a villager who is shot. And never to lose a reference to a movie that inspired it, the characters break from the story to debate whether Butch Cassidy and the Sundance Kid died at the end of “Butch Cassidy and the Sundance Kid.”

Watching this movie, you can see how much of an improvement he made with his next feature, “Shaun of the Dead.” That movie continued his idea of tapping into a genre and telling a story with friends (in the case of collaborators Simon Pegg and Nick Frost) but there’s much greater focus with jokes that tell the story, instead of using jokes to fill the run time (as Wright even admitted to doing with "A Fistful of Fingers" in his introduction). “Shaun of the Dead” is an incredibly funny movie but its many visual gags play in direct service to the propulsion of the narrative. And like "A Fistful of Fingers" or "Hot Fuzz" or anything Wright has made, dialogue is only one part of the comedy.

There’s a joke in the movie that nicely epitomizes what Wright’s filmmaking is all about. While Walter and The Squint are fighting towards a cliff, they’re stopped by a sign at the edge: “Edge of Cliff.” The camera then pans to the right slightly, and stops and goes back when it shows a different sign: “Edge of Frame.” Wright has always been a funny filmmaker whose directing has always concerned what he can do with what the camera is capturing—special effects and dialogue don't steer the image. It’s what has led to his snappy symmetrical editing, his cohesive but comedic fight scenes, or more specifically, the strictly practical driving in “Baby Driver.” Pick up a camera, aim at the target, and shoot. Wright has yet to lose that sharp eye.