The Ebert Club is invites you to share this classic William Castle B-rated movie, streaming free. And please join the Club and explore an eclectic assortment of discoveries. Your subscription helps support the Newsletter, the Far-Flung Correspondents and the On-Demanders on my site. - Roger Ebert 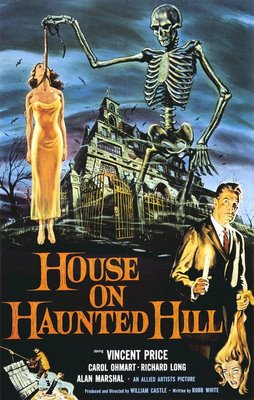 House on Haunted Hill (1959) Directed by William Castle. Produced by William Castle. Written by Robb White. Starring Vincent Price, Carolyn Craig, Elisha Cook, Carol Ohmart, Alan Marshal and Julie Mitchum.Synopsis: House on Haunted Hill is the tale of five people invited to spend the night inside a haunted house by an eccentric millionaire, Fredrick Loren, whose throwing a "party" for his fourth wife Annabelle - with the stipulation that the power will be out and the all the doors locked at midnight; allowing no escape. Anyone who stays inside the house for the entire night, assuming they're still alive come morning, will receive $10,000 each.The five guests all arrive in separate funeral cars with a hearse leading, which he says may be empty now - but they may be in need of it later. Frederick explains the rules of the party and gives each of the guests a .45 pistol for protection. Frederick's wife tries to warn the guests that her husband is psychotic, causing them to be very suspicious of him now, especially Nora Manning who becomes convinced he's trying to kill her when she keeps seeing mysterious ghouls -  including the ghost of Annabelle, who'd apparently hanged herself after being forced to attend the party....holy crap, what the hell's going on..?!

For more B-rated treasures, go here to join the Club
P.S. ~ IMDb reports: "William Castle used a gimmick called 'Emergo' in theaters. When the skeleton rises from the acid vat in the film, a lighted plastic skeleton on a wire appeared from a black box next to the screen to swoop over the heads of the audience. The skeleton would then be pulled back into the box as the skeleton in the film is 'reeled in.' Many theaters soon stopped using this effect because when the local boys heard about it, they would bring slingshots to the theater; when the skeleton started its journey, they would pull out their slingshots and fire at it."
Advertisement