Godfrey Cheshire on Knowing Abbas Kiarostami Through His Films and Friendship

Among the memories of Abbas Kiarostami that have come flooding to mind today:

One day in the late ‘90s when I visited him at his home in north Tehran, he told me he wanted to give me a present before I left Iran. He knew I greatly admired his still photographs and said he wanted to offer me a print of one. He asked me to choose it.

As we sat across a card table from each other, he held a stack of maybe 75 large prints, showing each one for maybe 15 seconds before lowering it to reveal the next. He kept his eyes on me. Though I was intently interested in everything he was showing me, I don’t recall revealing any particular feelings. At the end of the display, I told him which photo I liked best. He smiled and seemed pleased.

When I came back to his house a few days later, he said he had to apologize. The negative of the photo I’d chosen had been damaged in the lab, so he couldn’t give me that one. But he had another print, he said—of the photo I liked second best. He was right. The print he gave me was just that. He knew it was my second favorite from having watched my face and somehow registered the tiny flickers of emotion he saw there.

That print is framed and is on the wall of my living room now.

I recall this episode because it captures several things that are central to my memories of him: the extraordinary visual acuity that characterizes both his photographs and his films; his sometimes almost uncanny sensitivity to other people; and his mixture of dry wit and unaffected generosity toward those lucky enough to become his friends.

I first encountered his work in the autumn of 1992 when Film Comment asked me to attend the first festival of post-revolutionary Iranian films held at Lincoln Center, to see if it was worth an article. Since I’d heard nothing of the recent cinematic brilliance from Iran that had begun seeping into world film festivals, I was amazed at what I saw there: an array of highly distinctive auteurs, and one fascinating film after another. But the filmmaker and film that captivated me most were Abbas Kiarostami and “Close-Up,” his 1990 meta-cinematic masterpiece about a poor man arrested for impersonating a famous film director. I started my Film Comment article discussing the landmark film, and have written about it countless times since (including for Criterion’s DVD release).

“Close-Up” was a turning point for Kiarostami. Prior to Iran’s 1979 Revolution, he had spent a decade heading up the filmmaking division of Iran’s Center for the Intellectual Development for Children and Young Adults, where he made a number of striking shorts and pioneered what I later called a distinctive Iranian genre: the child-centered film, which, as Kiarostami conceived it, was a form “about, but not necessarily for, children.” He also made two notable features, “The Traveler” and “The Report,” during this period.

Come the Revolution, he, like many Iranian filmmakers, hunkered down and waited for the storm to pass. When authorities of the Islamic Republic decided to revive the cinema in the mid-80s (the Ayatollah Khomeini had hailed its potential for moral education), Kiarostami was among the filmmakers invited to resume making features. His first under the new regime, “Where Is the Friend’s House?,” was a spare, witty, poetically resonant tale of a boy trying to find a schoolmate’s home; it helped launch the child-centered film’s hugely successful post-revolutionary career, which included the Iranian cinema’s first major international prize, the 1995 Camera d’or at Cannes for “The White Balloon,” scripted by Kiarostami and directed by his former assistant, Jafar Panahi.

But “Close-Up” was the film that broke the mold—or rather added a new one, a kind of self-reflexive film that meditated on film and filmmakers and blurred the lines between fiction and non-fiction, life and art. It was this heady blend that led critics like myself to see in Iran, of all places, a kind of cinematic sophistication that surpassed that of most film cultures in other parts of the world. Although “Close-Up” was passed over by the world’s top festivals, its mounting critical renown got Kiarostami on the radar of Cannes’ programmers, and he was canny enough to subsequently turn out two more films-about-film, “And Life Goes On” (1992) and “Through the Olive Trees” (1994), that put him among Cannes’ leading contenders while also solidifying his global critical reputation.

When I first visited Iran in the mid-90s, I found that this very success had cast a pall of suspicion around Kiarostami. I was repeatedly told that Iranian cinephiles and critics didn’t regard him as their best director. Why were Westerners elevating him above other great filmmakers? Was this some kind of cultural conspiracy (Iranians are big on conspiracies) aimed at God-knows-what end? I tried to explain that festivals like Cannes are in the auteur-making business, and they only wanted one from Iran at the moment. It was not a matter of art, as perhaps it should have been, but of festival brand-building.

Looking back, I have even more admiration for what Kiarostami did next. He could have made another wry, humanistic, self-reflexive film like “Through the Olive Trees” and boosted his popularity even further among festival mavens. But when I saw him in Tehran in early ’97, I could sense he was after something radically different. He seemed very pressured and it was said the government was making his working conditions rough. Not long after, we learned why: his new film was about suicide, which is taboo under Islam. The battle over whether the film (which he reportedly modified with a new, more lyrical ending) would be permitted to go to Cannes reached the very top levels of the Iranian government, and lasted until the last minute. When I got on the plane for Cannes (after writing a report for Variety that was used to bolster Kiasotami’s position in Iran), it was still unclear whether the film would be released. 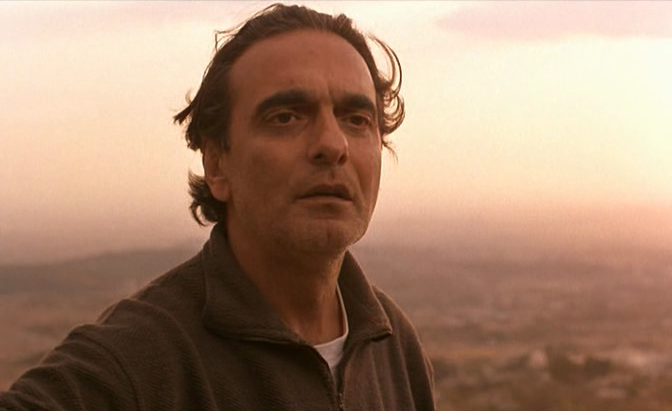 What followed was, of course, a famously dramatic piece of cinema history: “Taste of Cherry,” a very bleak but also mysterious film about an apparently well-off man’s spiral toward self-erasure, swept into Cannes and became the first Iranian film to win the Palme d’or. Yet while it drew hosannahs from the French especially, it was not universally loved by critics. The post-screening debate between Roger Ebert (con) and Jonathan Rosenbaum and Dave Kehr (pro) remains part of the film’s lore.

I’m pretty sure I didn’t participate in any of those discussions for a simple reason: I didn’t entirely know what to make of “Taste of Cherry,” to begin with. And this marked a turning point in my relationship with the director’s work. Before, having been writing about his films and studying them for several years, I felt like I knew what he was about as an artist. But beginning with “Taste of Cherry,” each new film confounded my expectations. It took days, weeks, months or even years to process and finally get a fix on the latest Kiarostami, to feel I had a grasp on what it was about that at least satisfied me. “Close-Up” was multi-layered in its meanings, but I felt I got it on first look. “Taste of Cherry” and “The Wind Will Carry Us” (2000), on the other hand, I came to regard as masterworks equal to that film, but on initial viewings they befuddled me—and demanded that I revamp my understanding of Kiarostami yet again.

For critics, who are increasingly pressed to deliver cogent judgments within an hour or two of seeing a film, such bafflements are as valuable as they are awkward. What if the greatest artists ultimately are the ones who require time, patience, thought, and perhaps above all, an awareness that views their work as an organically evolving whole rather than one consumerist nugget after another? That’s certainly one way of describing Kiarostami’s greatness. He was an artist who never rested in whatever parameters were used to define him, but kept on challenging himself, pushing the boundaries that the world, the authorities, critics, admirers and even he himself had set around him.

In the West, such an attitude may require a certain amount of daring vis a vis one’s career, but in Iran it requires genuine courage, incredible stamina and steadfast determination. Though Kiarostami did make his last two features outside Iran, he always regarded his art firmly rooted in Iranian culture; though thoroughly cosmopolitan, he never considered becoming an expatriate. Throughout his career, he walked a very tricky tightrope in his relationship with the government and his triumph was that he survived.

From the time Kiarostami’s ascent at Cannes began, he increasingly came to be seen as some kind of “world” auteur and his work understood in terms of Western modernism and its aftermath. But the great luck I had in encountering that work was that it also entailed spending a fair amount of time in Iran, so that instead of seeing him mainly in relation to Godard, Bergman and Tarkovky, say, I pondered his connections to classical Persian artists such as Omar Khayyam, Rumi and Hafez well as Iranian moderns such as Sohrab Sepheri and Forugh Farrokhzad. Persian culture is still a vast terra incognita to most Westerners, and discovering it is a life-changing adventure that I continue to urge on anyone searching for the deepest layers and implications of Kiarostami’s work.

After “Taste of Cherry” won at Cannes, I followed Kiarostami to Iran and spent most of the summer there, a good part of it with him. He was continually generous in sitting in front a tape recorder with me, and one day offered to drive me to the distant rural area where the Koker Trilogy (“Where Is the Friend’s House?” “And Life Goes On” and “Through the Olive Trees”) was filmed. The place was a bucolic village until it was destroyed by an earthquake, which shrouds the trilogy’s second and third films in reminders of mortality. But that hardly makes the works morbid: quite the contrary, in fact. Kiarostami’s films so often seem to balance on the knife’s edge between existence and its opposite, but always implicitly end up siding with lucidity and life. Just as he gazed at me with such precise comprehension as I looked at his photos, so do his films gaze at the world. That day in the remains of Koker, he beheld ruin but looked as happy, alive and bemused as I’ve ever seen anyone. That life will remain in his films, as a poetic and philosophic testament, as long as the medium remembers its masters.