Turning and turning in the widening gyre of 2014 Oscar predictions, a nomination for James Gandolfini in Nicole Holofcener’s "Enough Said" is making the rounds as choice gossip. Already a decorated actor, who died suddenly of a heart attack in June this year, Gandolfini was yet to play a love interest in a romantic comedy—with perhaps the shady exception of "Romance & Cigarettes "(which is excellent). If you were fortunate to know the actor outside of the nefarious family man Tony in David Chase’s operatic "The Sopranos," you may have observed with what equanimity he played tough guys and military men who were impaired by their shortcomings or haunted by personal failures. He didn’t become Tony until he was in his late thirties, but placed on either side of his smaller roles in film, Tony becomes the centerpiece—a life of compromised masculinity that the performer both deliberately and inadvertently channeled through his craft.

When he wasn’t a wise guy, Gandolfini undercut martial stature with a series of soldier parts. In "The Man Who Wasn’t There," Big Dave Brewster is a buffoon whose every gesture he flitters out like a punch line, sparring with an invisible opponent. At this stage (2001), well into his status as the Don of New Jersey, it is an impressive feat to find a distance from Tony. The Coens, aware of this task, make his size a little more ridiculous; he sits small in his suit, the cigars are bigger. He is also briefly featured in a frilled apron, which I take as a little wink to Edward G. Robinson’s uncharacteristic attire in "Scarlet Street". 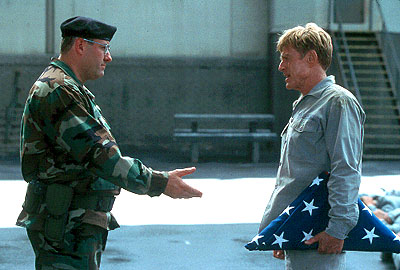 In "The Last Castle," opposite the impossibly virtuous Robert Redford, Gandolfini plays bureaucratic prison warden, Colonel Winter. He wears glasses that magnify his eyes to a cartoonish dimension. His speech is so precise on every consonant—every syllable issued with such desperate control—that his buttoned-down repression makes him figure pathetic, wound so tight that his shame in Redford’s war-hero shadow, is screaming from behind his pursed lips. We feel everything he doesn’t say.

In Armando Ianucci’s sensational "In The Loop," he is another military man whose experience and jurisdiction is constantly called into question. His vitriolic encounter with Peter Capaldi sees him again made a fool of and his playroom war strategies with the gorgeous Mimi Kennedy reflect how ludicrous it is that anyone should project expectations onto a man based on his position, or his battle history. Kennedy warns that he tread with care in that child’s bedroom. He picks the paper up off the floor and dolefully (and delightfully) scrunches it between his hands.

Apart from Tony Soprano, "Killing Them Softly" was the first of his roles to magnanimously swathe esteem and place an aura of splendour around the actor. It wears its homages to gangster films and "The Sopranos" like scouts badges, which in itself is a kind of mimicry of the show. He plays Mickey, a hired gun on parole, recruited by Jackie (Brad Pitt) to help him carry out a hit. The warm tones of the restaurant’s décor are coloured around his tinted steel frames. He gives a monologue—about his wife wanting a divorce, and him wanting her back—and the camera keeps with him, drawing us into his sorrow without actually moving. He moves us. His body turned away from Pitt, his brow flexing as he loses his argument with himself, his gaze falling to another place, a different conversation. His gestures imply the space between New Orleans and his home. We imagine that this place is New Jersey. 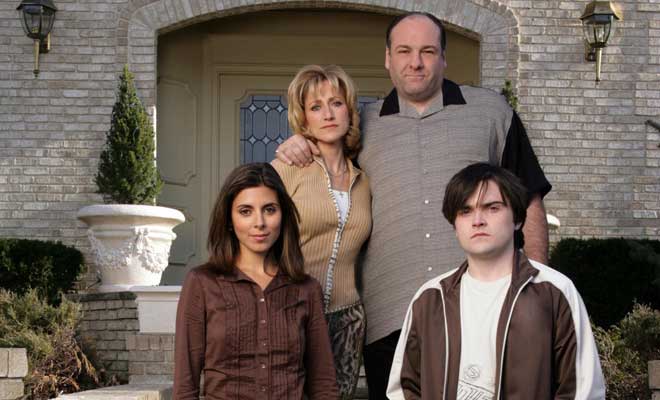 In "The Sopranos" pilot, Chase and Gandolfini were still configuring the episode structure, tuning tonal kinks—they knew not what it was. They use voice-over for the first and last time. Tony Soprano hadn’t yet that buttery, heavy-tongued Jersey accent that Gandolfini perfected by the time the show was picked up. He is already an intimidating figure, standing taller than all of his co-stars. When Christopher boasts that he should go to Hollywood, Tony violently pulls him up from out of his chair, as if his nephew were made of straw. According to Chase, this was Gandolfini’s suggestion. It bears a striking resemblance to Brando’s sudden accost of Al Martino early in "The Godfather" (also a conversation about Hollywood). Brando was a method actor. He gained weight. He wore weights in his jaw to sag his cheeks. Gandolfini didn't need to accessorize his volcanic nature; just illuminate it, with the occasional cigar.

Learning Tony’s tells is part of the engagement that "The Sopranos" offers. Tony is a prolific liar, to everyone he knows, including himself. In the program’s fifth episode, "College," he lifts that awed expression to Hawthorne’s words, "No man can wear one face to himself and another to the multitude, without finally getting bewildered as to which may be the true." Gandolfini is, like Tony, an excellent liar, most particularly when viewers are in on it, when we know the truth, whether Tony does or doesn’t. Tony understands Hawthorne’s words. His look is not one of confusion, but of a concealed fear at his impossible situation. What truths these lies reveal about the character are headily immersive—enormous—and it’s probably the point at which "The Sopranos" became cinema, and it was partly because Gandolfini could lie to us convincingly and unconvincingly at once. 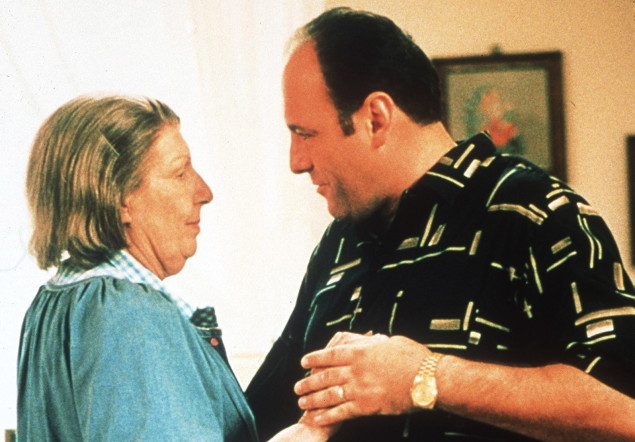 He met with a challenge early in the third season of the show when actress Nancy Marchand (who played Tony’s mother Livia) died during the hiatus, causing a major story restructure and the need for a graceful cover-up. Tony visits Livia to discuss her recent arrest for trying to use stolen airline tickets that he had palmed off on her. Gandolfini has a conversation with a body-double in a chair, and a digital patchwork of Marchand’s shining moments gather some likeness of her being. It isn’t entirely a success, but Gandolfini is still marvellous. Tony’s anxiety at the possibility of his own mother testifying against him is conveyed with abrupt despondency. He is rushed, flustered, pacing and grabbing for all kinds of props and conversation to fill a significant void. It also recalls their first argument in the pilot episode, and is orchestrated beautifully, considering the mournful circumstance.
Advertisement

In the final episodes of "The Sopranos," when Tony’s monster is revealed and then abruptly banished from Dr Melfi’s office—a harsh farewell that forces us to engage the criminal—Gandolfini made the transformation seamless. All these feelings toward this sociopath have been dormant within us, glimpsed on several occasions but concealed, seen through the eyes of those who love him much stronger than those averse to him. We were suddenly accountable. Our desire for a positive outcome for Tony finally appears perverse, wrong, and impossible. In the last moment, we finally learn what it is to be Tony. What the world looks like to him. What every scene must have felt like for its star. There again, for the last time, was that awed expression. And then the light went out on "The Sopranos".

It is difficult to distill such an immense performance—in terms of substance, not just duration—into a few paragraphs. Gandolfini was his best opposite Edie Falco, Michael Imperioli and Vincent Curatola. All altercations and sentiments shared between he and them, those breaths between words, when his eyes would gaze into theirs, those fleeting seconds of silence, full of passionate intensity, those forlorn endeavours to placate one another, hard blinking, truth striking, truth erupting, are when his sad eyes can hold the entire room in orbit.

With few exceptions, James Gandolfini played men who were in conflict with the limits of their masculinity; a gangster who has panic attacks ("The Sopranos"); a military man who has never been in combat ("The Last Castle", "The Man Who Wasn’t There" and—in some sense—"Not Fade Away"); a monster who fears abandonment ("Where The Wild Things Are"); a hit man whose addictions have numbed him ("Killing Them Softly"); a brute whose first kill haunts him ("True Romance"); a kidnapper who befriends his hostage ("The Mexican"). His legacy offers years of a man’s life and the sum of his parts form a vivid, and beautiful semblance of modern manhood. It is a rare combination of choice and accident that an actor’s roles should narrate such an assemblage. He was an artist. He had something to say.