Did You Know There's a New Stephen Chow Movie Coming out Friday?

Did you know that there's a new Stephen Chow movie coming out this Friday? Chow, the Hong Kong super-star comedian turned blockbuster filmmaker behind hits like "Shaolin Soccer" and "Kung Fu Hustle," wrote and produced "Journey to the West: The Demons Strike Back," a sequel to the terrific "Journey to the West: Conquering the Demons," which he co-wrote/co-directed in 2013. Both of Chow's films are extremely loose riffs—I hesitate to even call them "adaptations"-on Wu's "Journey to the West," an influential 16th century fantasy novel about four pilgrims—three demi-god-like animals and one Buddhist monk—and their long, strange trip to India to find and transport the Buddha's sutras back to China. Wu's novel has recently been adapted into several vehicles for major Hong Kong stars like Jackie Chan ("Monkey King: Hero is Back") and Donnie Yen ("The Monkey King: The Legend Begins").

Still, while the American releases of those other adaptations were, uh, modest, you might wonder why you haven't heard of "Journey to the West: The Demons Strike Back" since Chow's been on a record-breaking roll at the box office lately. Variety reports that "The Demons Strike Back" made $85 million last weekend when it debuted across Asia in time for the Chinese New Year, $52.5 million of which was amassed on opening day alone. No movie has had a bigger opening since 2015's Chow-directed "The Mermaid," a blockbuster comedy that raked in a massive $526 million internationally, including a tiny $3 million (on 106 screens) across North America. "Conquering the Demons" did great business everywhere but the US too: compare its $215 million international gross with its sad $18,000 (on seven screens) American haul.

Don't panic yet, there's good news: Sony Pictures, who distributed almost all of the Chow-directed films of the last few years—save for the Magnet-Releasing-distributed "Journey to the West: Conquering the Demons"—is opening the new film at 67 locations in North America, including nine IMAX screens (and we will have a review tomorrow). This is roughly double the amount of screens that "The Mermaid" opened on in America during its opening weekend, when Chinese-language speaking audiences flooded theaters and forced Sony to reconsider their release strategy. There wasn't much coverage of the film at the start, partly because, to paraphrase a Sony representative who shall remain nameless, they didn't expect there to be any interest outside of indigenous Chinese audiences.

We pause for a moment to stick our heads out the window and scream: seriously, no interest in the latest Chow film? Are we talking about the same guy, the one that Sony Pictures Classics gave an unprecedented wide release (on 2503 screens) to back in 2004 for "Kung Fu Hustle"? According to Box Office Mojo, "Kung Fu Hustle" was the fifth highest-grossing movie in America at one point, which is not too shabby for a film headlined by a star that many viewers simply hadn't heard of.

But even when people had heard of Chow, Sony underestimated him. I had to talk to four different Sony reps when "The Mermaid" came out—just to confirm that Sony was in fact releasing the film in America. I had a much easier time A) confirming the release of "The Demons Strike Back" and B) seeing the film. But how much other coverage of this film are you seeing? Why was I the only critic at the screening that I attended (I could tell I was the only film writer because nobody else signed a non-disclosure agreement, and everyone else in the theater returned to their offices, located three floors below the screening room)? I saw "The Demons Strike Back" before Hong Kong critics got to—no HK press members got to see the film pre-release, though that's apparently standard operating procedure for major Chinese New Year releases. Still, why did it take my detective-work to ferret this movie out and give it some coverage? This isn't a rarefied arthouse flick, but rather a big-budget action-fantasy. So where's my back-up? 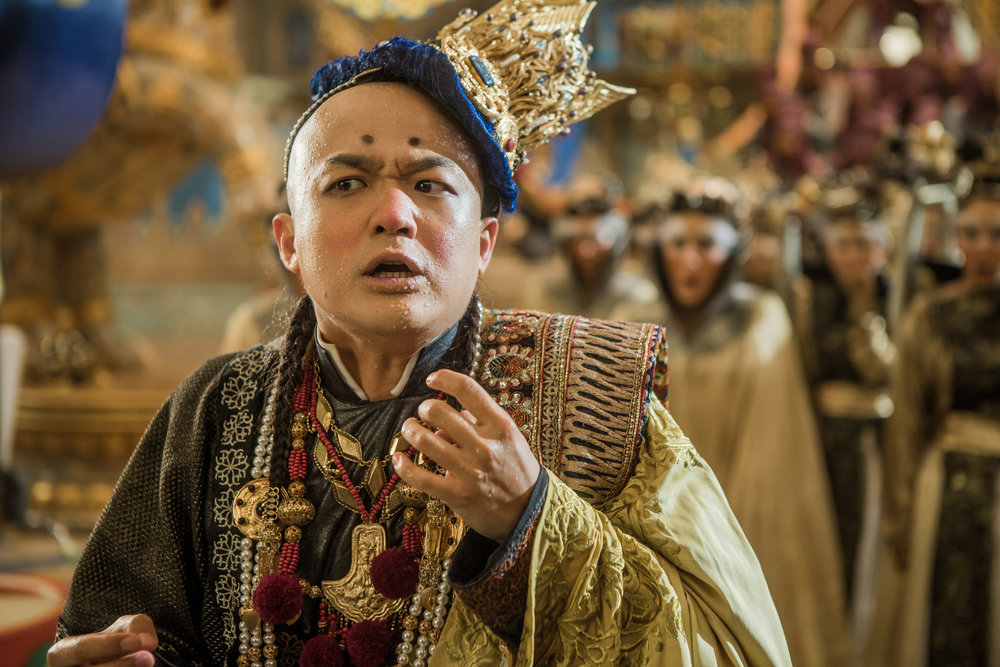 For answers, check out indispensable programmer/critic/novelist Grady Hendrix's "Kaiju Shakedown" column, originally published in Variety Asia, but now part of Film Comment's regular features. That move is telling: if you have any sustained and/or serious interest in Asian pop culture, you have to struggle to get through to a general audience. Hendrix knows this better than most of us, and his continued survival as a programmer and critic of Asian films is extraordinarily heartening. As a founding member of the New York Asian Film Festival programmers, Hendrix has paid out of pocket (on personal credit cards!) to introduce Americans to new Asian films. Thankfully, you don't have to attend a NYAFF screening to catch one of Grady's informative, high-energy pre-screening sermons. Just read "Kaiju Shakedown," where he's repeatedly covered Chow's films. I highly recommend his piece on Chow and director Jeffrey Lau's "Chinese Odyssey" diptych, an earlier pair of extra-loose "Journey to the West" adaptations that made serious Chinese New Year box office bank.

Still, while Hendrix's erudite and entertaining writing sheds a lot of light on Chow's meteoric rise to popularity and artistic maturity, you can get an idea of why so many American audience members have no clue who Chow is just by browsing Netflix, iTunes or Amazon. Sure, you can rent hits like "Fight Back to School" and "Shaolin Soccer," but the rest of Chow's American-released catalog is a hodge-podge of good to mediocre examples of "mo lei tau" comedy, or "makes no sense" in Cantonese. "Mo lei tau" films like "Tricky Brains" are ... sometimes very hard to watch since they're dependent on slippery language-specific wordplay and terrible prop comedy. Chow may have learned a lot about filmmaking since he starred in mediocre titles like "Love on Delivery" and "Out of the Dark," but you can't tell just by watching them.

It's disappointing, but unsurprising that "Journey to the West: The Demons Strike Back" is not being gifted with a "Kung Fu Hustle"-scale release. Asian movies generally don't get treated that well by American distributors, certainly not the most recent films by "The Demons Strike Back" director Tsui Hark, whose returns per screen have been decent, but nothing close to the $3 million that "The Mermaid" raked in. I mean, yes, the Chinese box office is still projected to surpass the American box office this year. But American viewers can't afford to wait around for another "Kung Fu Hustle"-style wide release for the latest Chow release. If you're even vaguely interested in seeing "The Demons Strike Back," check local showtimes and see it this weekend. Show Sony that they shouldn't keep under-estimating one of the world's biggest stars.