Out of the Dark

"Out of the Dark," a ghost story about four white people who are haunted by dead Colombian children, strings together horror movie tropes that were previously used to greater effect in recent horror films like "The Orphanage," "The Others," and the 2010 remake of "Don't Be Afraid of the Dark." Those recent movies stood out thanks to their abundant atmosphere, sturdy, psychologically-realistic characterizations, and clever direction. By contrast, "Out of the Dark" never leaves much of an impression despite character actor Stephen Rea's endearingly cocky performance, and an exotic—though largely under-utilized—South American setting.

While the film's supernatural plot is generic enough to be potentially decent, it does require viewers to suspend their disbelief long enough to be conceptually thoughtful. Married couple Paul and Sarah Harriman (Scott Speedman and Julia Stiles) move into Contreras's Santa Clara estate along with their young daughter Hannah (Pixie Davies).Paul and Sarah have inherited a haunted house from Jordan (Rea), Sarah's father and the owner of a local paper mill. But Sarah and Paul reconsider Jordan's gift after Hannah is persistently harassed by vindictive ghost children.

Eventually, several pointlessly contrived plot points bog down the film's otherwise completely acceptable scenario. For example, Hannah is abducted by the above-mentioned ghost children, but not because she's left without adult supervision. No, while Hannah chases her stuffed animal into a dumbwaiter, her babysitter Catalina (Vanesa Tamayo) is distracted by a red ball. The fact that Catalina, a thinly-drawn character who only exists to care for Hannah, is taken away from Hannah by a possessed rubber ball isn't the lamest idea in a horror film, but that kind of lame red herring becomes a minor point of fascination since the rest of the film isn't moody enough to keep you focused on connecting the film's schematic dots.

This brings us to the biggest problem with "Out of the Dark:" it's not even immediately involving. For starters, the film's cast is drastically uneven. While Rea is charming, and restrained, both Stiles and Speedman are completely forgettable. Davies is cute enough, she understandably doesn't have much range beyond pouting, and smiling. Spanish director Lluis Quilez doesn't take enough time to show us what his characters are feeling, or how their bodies move in relation to each other. He also doesn't film any of his actors with proper lighting, preferring a murky, brownish-black palette that makes the title of "Out of the Dark" seem like wishful thinking.

Without compelling characters, worthwhile performances, or superficially arresting aesthetic pleasures, the only thing of interest in "Out of the Dark" is its thematic concern with suppressed third-world citizens. The ghosts that haunt the Harrimans are just ciphers, poorly-defined spirits who want their deaths to be noticed and/or avenged. That revanchist trend is a trite, but satisfying impulse that doesn't work here given how simultaneously drawn-out and un-nuanced the film's central power dynamic is; the Harrimans bring to light what a barely present group of locals either don't remember or don't seem to care about.

There's only one compelling scene in "Out of the Dark" that hints at greater depth, but it's far too short, and only teases us with ideas that are never developed. In this early sequence, Paul is driven from the airport with his family in Jordan's car. Two young beggars approach the car. Paul tries to lower his window so he can give the two gaunt children some money, but his driver locks Paul's window for him. Paul protests, but is ignored, and the car speeds away. Ignoring the locals is business as usual in Jordan's world, a taboo topic that nobody broaches. If only there were more where that came from. 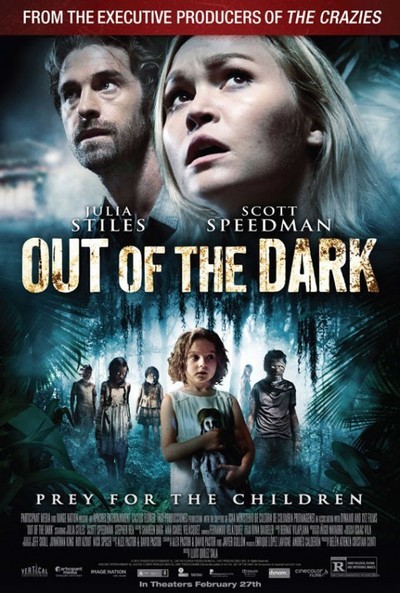 Rated R for some violence, terror and disturbing images