"The Mermaid" will make you laugh.

It will make you laugh. Guaranteed.

"The Mermaid" is a romantic-comedy fantasy from actor-director-producer Stephen Chow ("Kung Fu Hustle," "Shaolin Soccer") about a billionaire who falls in love with a mermaid. Paul Reubens' description of Pee-Wee Herman as "a simple thing to hang a bunch of stuff on" could apply to this movie. It's a gag machine with gears that never stop turning. Chow's broad, at times bawdy sense of humor, is tempered by a keen eye for composition, and his comic timing makes even the goofiest, broadest jokes work. In fact nearly all of the jokes of every kind work. If you'd told me this in advance of my first viewing of the film, on opening night in a Manhattan theater, I wouldn't have believed it, but the sound of a sold-out audience laughing from start to finish is the surest metric of whether a comedy works. This movie works.

The plot: Jerkish tycoon Liu Xuan (Deng Chao) has made a ton of money off of sonar technology that incidentally murders all nearby sea-life. This includes an understandably pissed-off community of mer-people, led by spiteful Octopus (Show Luo) and naive mermaid Shan (Lin Yun). Since Liu Xuan has a weakness for the ladies, Shan is tasked with avenging her fellow cryptids by seducing and killing him.

But there's a problem: Shan and Liu Xuan like each other.

"The Mermaid" has many hallmarks of Chow's working-class-egotist-makes-good style of comedy. Chow may not be playing the (apparently not-so-) exaggerated version of his petulant public person here, as he often does. But Liu Xuan can easily be read as Chow's stand-in: he's rich, but "low-class," in the words of Shan's spiteful, mega-rich rival Ruolan (Zhang Yuqi). Flashy clothes and "Cribs"-style parties, complete with poolside babes and decades-old wine, are the hallmarks of Liu Xuan's nouveau riche lifestyle. So when Shan shows up, wearing smeared make-up and ugly rubber weights to disguise her fins, everybody knows that Liu Xuan will still chase after her. He's a phony, as is made apparent by his paste-on pencil mustache. Tony Stark he ain't. But that's part of his character's wisp-thin appeal: he's instantly recognizable as a fake who nevertheless wants to make good.

Still, while Chao's appropriately exaggerated performance makes Liu Xuan a likable antihero, Lin's turn as Shan is the film's secret weapon. A skilled supporting cast of comedians, including Shan's fellow sea-people, all earn laughs, but Lin has the unenviable task of making you believe that Shan is as awkward as she seems. You have to buy the notion that Shan's sincere when she flashes Xiu Luan and he insists that he get a better look at her wild charms.

You may be wondering, If this movie is so bizarre, so wonderful, so funny, why haven't I heard of it? The answer to that question is infuriating. Chow's "Shaolin Soccer" and "Kung Fu Hustle" were international hits, and he's a mega-star in his native Hong Kong. Last weekend, "The Mermaid" shattered domestic box office records in China and became the #2 movie in the world, after "Deadpool." Its American release is an afterthought for one reason: mismanagement by its American distributor, Sony Corporation of America. (In theory the film is distributed by Asia Releasing, a subsidiary that handles the release of Asian films in the US and Canada, but the print I saw had a plain old Sony logo in front of it.)

Sony ought to be ashamed for keeping such a good film from American viewers who aren't already part of the Chinese diasporic community. Three of the four Sony representatives I spoke with didn't even know that the company was releasing "The Mermaid." The fourth rep told me that his company hadn't thought to set up advanced screenings for US press, or even send out an email alerting them to the film's impending release. I was told that the film had already gotten positive reviews—all pegged to its release in Asia—and that Sony didn't expect it to interest many people, outside of Chinese or Chinese-American film fans.

This is the sad reality of foreign films in America today: the domestic marketplace is so hopelessly biased in favor of English-language films, most of them produced in the United States, that the second most popular movie in the world is treated as if it doesn't even exist.

To find out if it's playing near you, click here. 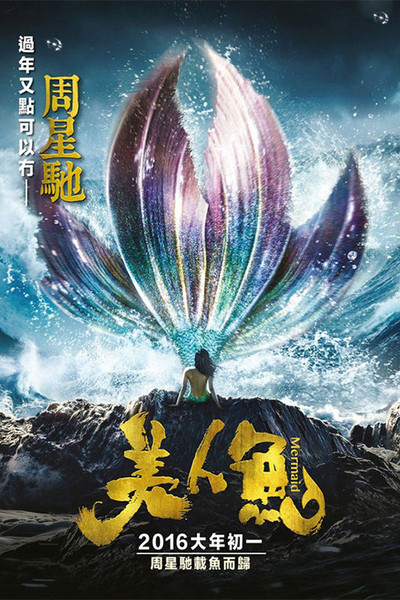