A century ago, Detroit represented the height of American ingenuity. The Motor City was once the fastest growing city in the country, and the capital of industry as America dominated worldwide automobile production. As early as 1960, though, the population began to drop and since then, the city has been in steady decline. Detroit, which once symbolized America’s rise has become its city of dread. In recent years, horror filmmakers have latched onto the city as a means of exploring contemporary fears. A number of horror films from a wide range of filmmakers have used Detroit as a nightmare backdrop for a new brand of horror.

Who controls a city’s image? Does it belong to its residents, its leaders or does it belong to all of us? This question lies at the heart of Ryan Gosling’s 2014 directorial debut, "Lost River." Ryan Gosling, ostensibly an outsider, fetishizes Detroit and mines it for cryptic and apocalyptic symbols and at least as a collection of images Lost River may superficially be the most “Detroit” film of the past decade.

Horror explored through a creeping sense of dread and casual bloodshed, Gosling transforms Detroit into the mythical town of “Lost River.” The film opens with a shot spanning abandoned and overgrown homes and sets the tone of a single mother desperate to provide for her family. Fires and water meet, as the city seems to be in a constant state of burning, while a mysterious underwater city becomes a central image for the film’s emotional trajectory. Detroit itself has thousands of fires a year, many of them set deliberately. With a crippling infrastructure and underfunded first responders, very little stands in the way of the city burning.

That lies as one of the great virtues of "Lost River," a messy and often vapid film that at least presents the people of this fictional variation on Detroit as good, though they may be poor. The conditions of the city and the sense of entrapment the characters feel doesn’t lie in their moral failures but in decades of political corruption and failing industries. Gosling’s film is among the few horror films that represent at least part of the 84% black population (according to 2010 census) that live in Detroit. It is perhaps the only one that even attempts to contextualize the struggle to survive, and weigh down any desire to stay beyond the inability to leave.

The film still fails to find comfortable footing, especially as it leans too heavily for horror on a club that specializes in murder burlesque. The decaying city more engaging than the disturbed club, the film works best as it explores the nature of decay as having the ability to creep beyond the city limits and into people’s hearts. Barbara Steele’s Miss Havisham by way of Mario Bava holds more of the film’s dread than any of the burlesque performances of performative bloodshed does. 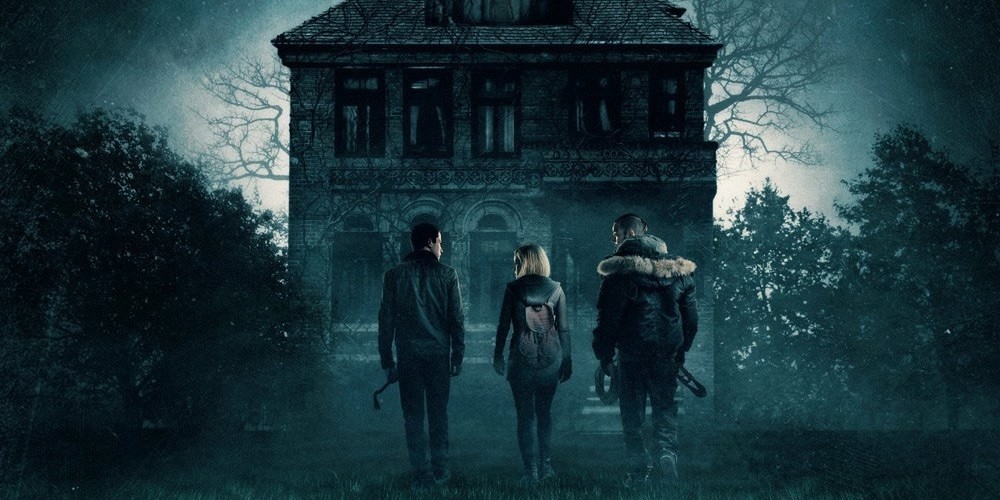 Gosling’s film, though messy, showcases a far more nuanced vision of Detroit then Fede Alvarez’s “Don’t Breathe." In Alvarez’s 2016 movie, desperate to get out of Detroit, a group of teens robs houses in the hope of getting enough money to head to California. Upon hearing of a small fortune lying in the walls of a blind man’s house in the middle of an abandoned neighborhood, they break in, only to find out they can’t leave.

A compact exercise in genre, Detroit becomes an integral part of the narrative trajectory of “Don’t Breathe” as the stalled growth and abandoned neighborhoods of the city are necessary for the credibility of the narrative to unfold. It presents Detroit as a city to be escaped, condemned by previous generations, leaving the city’s youth to pillage for survival. Frustratingly, the film aesthetically becomes little more than "ruin porn," showcasing Detroit only through collapsing infrastructure and absent or morally corrupt adults. It is a city beyond saving and like the characters within it, even the filmmakers escaped from it, shooting the interiors (the majority of the film) in Budapest. The representation of the city itself shallow and vague, painting the city in broad strokes of misery. 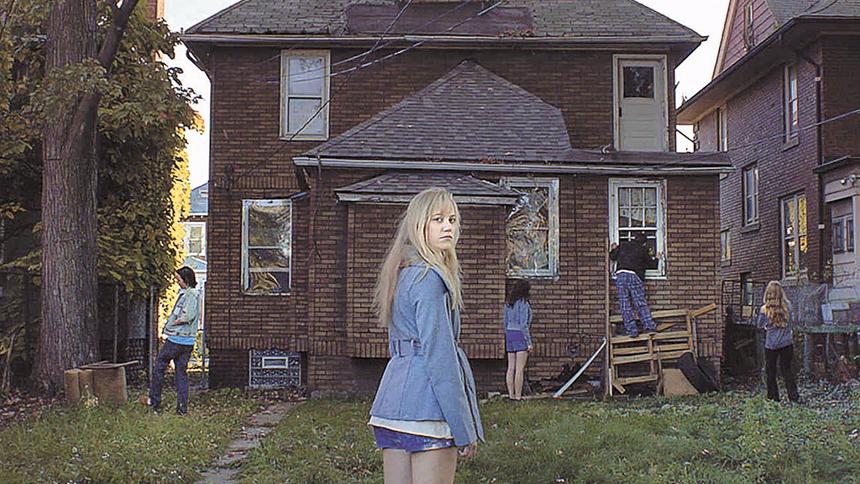 Conversely, Michigan native, David Robert Mitchell creates one of the most haunting visions of Detroit with his 2014 film “It Follows,” by drawing on geography and history as a means of sourcing the city for dread. While the film opens in Sterling Heights, a large and relatively safe suburb north of Detroit, Mitchell positions the source of horror within the Detroit city limits where Jay (Maika Monroe) becomes infected and eventually confronts the monster. Crucially, Jay invites the horror into the suburbs as the line between urban and suburban is blurred by violence spread from within the crumbling city core. The middle-class families of the film, struggling in their own way, turn away from Detroit, shielding their children through artificial geographical barriers. Now, young adults who can cross 8 Mile, what does Michigan or the world have to offer? “Now that we’re old enough,” Jay wonders. “Where the hell do we go?”

Cars so pivotal to the rise of Detroit become the central image of the film, featured not only prominently on the film’s poster, but as the backseat to Jay’s infection, the source of the accident that landed her in the hospital, and the only consistently reliable refuge from the following monster. The two most prominent vehicles in the film, a 1975 Plymouth Gran Fury and a 1980 Chevrolet Impala, serve as reminders of the past—representing two major car companies that were intertwined with Detroit’s rise and fall. The scene that sets the horror into action, where Jay has sex with her date, only to have him attack her happens at the abandoned Packard Factory. Once the most advanced car producing factory in the world, the concrete shell is overgrown with plants and covered in graffiti. It stands a shadow of its former glory, and, as a cold wind whistles through it, Jay is confronted with the monster of her destiny. In a film so preoccupied with the past, with its ‘80s synth soundtrack and softened nostalgia for youth, the promise of what could have been is now barely a memory: the question of the American dream so far in the past that it might have never existed at all. 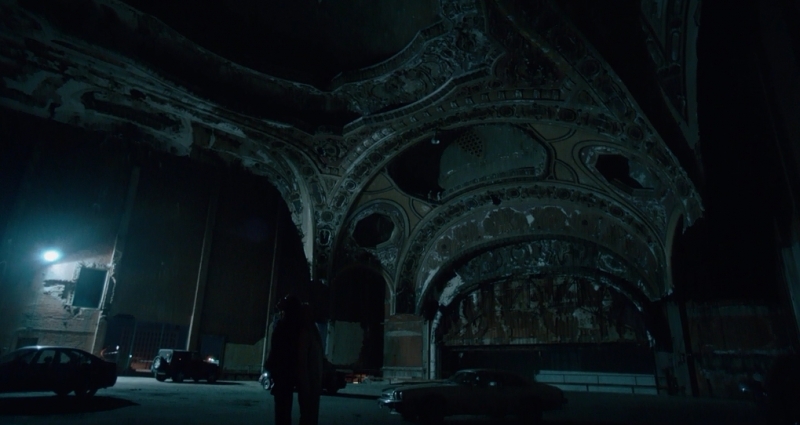 “That’s the Packard Plant,” Adam says. “Where they once built the most beautiful cars in the world.” Adam and Eve, the two vampires at the heart of 2013's "Only Lovers Left Alive," hold Detroit in special regard. Rather than representing through decay humanity’s failed promise, it represents nature’s power of rebirth. For Eve, Detroit is a city that “will rise again,” because “there’s water here. When the cities in the south will burn, this place will be in bloom.”

In the film, humanity’s bloodstream has long been undrinkable, and people are referred to as zombies—self-involved and squandering our existence. The landscape for horror represented by Detroit in “Only Lovers Left Alive” is the obsolescence of humanity itself. Detroit of the film defies the physics of the natural world, populated by wild animals and unusual plants that should not be there at all. The city's physical contributions to history—beautiful cars and beautiful music—remain the most tangible remnants of humanity left for the two immortal vampires. Director Jim Jarmusch presents what can be interpreted as ultimately an optimistic view of the city, suggesting that it once represented humanity’s rise, then its fall, but it might offer hope for our rebirth as well.

Greater Michigan has also been home to some of the more interesting horror films of the past few years as well, be it the surprisingly inventive "Scream 4," which revived the self-aware horror franchise or Joel Potrykus’ quietly desolate 2016 film “The Alchemist Cookbook,” set in the state’s backwoods. Potrykus, in particular, stands out as one of Michigan’s great emerging auteurs—his filmmaking output, thus far, is centered on his home in Grand Rapids, demonstrating a rich and self-reflective voice in the American independent scene.

While the Republican-controlled government has repealed the generous tax incentive which helped boost the local industry, this move hopefully won’t be the end of Michigan’s cinematic renaissance. As a springboard of inspiration, the state, and Detroit in particular, has offered filmmakers new grounds to explore contemporary fears and dreams. Detroit, a city representing the best and worst of America, hangs on through these films, not ready to be forgotten.