The reviews for Ryan Gosling’s directorial debut in “Lost River” (which he also wrote) out of Cannes last year were so vitriolic and downright hateful that I expected some sort of narcissistic variation on “The Room”. The good news is that “Lost River” is far from horrible; there are too many interesting ideas and strong visual compositions to write it off completely, and it’s actually kind of bizarre that so many people did so on the Riviera. The bad news is that it still doesn’t quite work, largely because Gosling has bitten off more than he can chew, assembling ideas and images without the directorial vision to connect them. His film was clearly influenced by Nicolas Winding Refn, David Lynch and Terrence Malick, and one gets the distinct impression that mimicking filmmakers with such confident visual sensibilities may not have been the best way for a rookie director to get his feet wet. The result is a piece with images that connect only superficially, never finding the thematic resonance of a Lynch or Malick vision. Gosling’s eye is too confident to ignore, but one hopes he points it at a more-engaging product next time.

“Lost River” takes place in a totally desolate and nearly-destroyed Detroit, in which Billy (Christina Hendricks) and her son Bones (Iain De Caestecker) struggle to make ends meet. She’s three months behind on the mortgage payments; he spends his days scrounging burned-out buildings for copper. In the world of “Lost River”, there are predators everywhere for people already on the edge of society; people who exist to pull them into the abyss. Billy’s comes in the form of the new employee she meets at the bank named Dave (Ben Mendolsohn), who has a proposition for her to make more money. Bones’ comes in the form of Bully (Matt Smith), a freakish villain who drives around town with a megaphone warning those considering stealing his copper that they better “look at his muscles” first.

Exhausting all of her options, Billy takes up Dave’s offer to work at an exclusive, hidden nightclub, at which female performers pretend to mutilate and disfigure themselves. Run by the charismatic Cat (Eva Mendes), every night’s show includes paying customers who just want to be washed in the fake blood of beautiful women. And, of course, there’s something even more nefarious, but more profitable, for Billy in the basement of this disturbing establishment. Dave tells Billy that he goes town to town, setting up these exhibitions of violence, even in poor areas, and makes a fortune. The commentary on mass-produced re-creations of horror is a bit underlined and highlighted, but it leads to some striking imagery, including Hendricks casually taking off her face.

Meanwhile, Bones’ only friend Rat (Saoirse Ronan) tells him about an underwater city, at the bottom of the reservoir. The story goes that the modern Atlantis was flooded, and the submerging of it led to a curse on the people above. Bones becomes convinced he needs to retrieve an item from there to lift the curse and bring happiness to Billy and Rat.

From early on, it’s clear that Gosling is not concerned with traditional narrative, as much as he is fever dream filmmaking, enhanced by a Refn-esque techno score and imagery that conveys directorial intention more than dialogue. After searching for copper, Bones sees a bicycle on fire roll by. It is an image that only exists in film but it makes clear the dangerous world that Gosling is trying to capture. In this environment, Bones’ little brother thinks there are monsters in his room. Gosling is visually conveying that there are monsters everywhere, waiting to grab people who have run out of options.

The problems with Golsing's film exist in that tried-and-true line between being mysterious & symbolic and just being self-indulgent. The best elements of “Lost River” approach near fairy tale tones. There’s a spell that needs to be broken, a man who is missing part of his face, a grandmother who remains mute—these feel like beats from Grimm more than anything else. But Gosling doesn’t have a grip on them, and the film reverts back to Malick-esque scenes of lyricism and then into relatively straightforward scenes of dialogue. In fact, those scenes, such as the first between Hendricks and Mendelsohn, are the best in the film. Gosling definitely has a nice touch with actors, he just buries in them in so much cluttered, cinematic noise that they get lost themselves. And he really muddles the ending, as we need more definition as to what is actually happening in a few key climactic moments if we’re expected to care, which I believe we are.

I believe. It's hard to say what exactly Gosling wants us to take away from his debut. I am very curious to see what he does next, now that he's made an "everything and the kitchen sink" film of his most beloved influences. For now, “Lost River” is one of those weird films that I think some people will absolutely adore, grabbing on to its performances, imagery, and ideas, without really caring that they haven’t been stitched together in an interesting enough way. 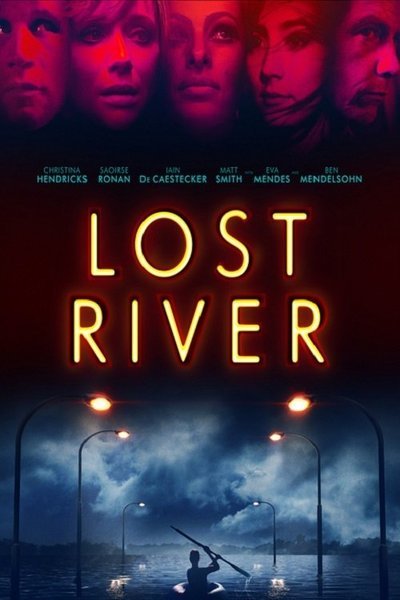