Whip Whitaker drinks because he drinks 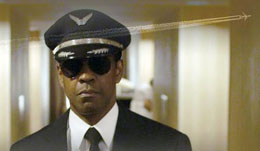 Robert Zemeckis' new film "Flight" (2012) returns us to the terrain of live action after his three consecutive animated films (two of which were happy movies about Christmas). Here, he makes it clear from the very first scene that this is a far edgier Zemeckis. It is far more graphic and far more emotional than anything we have previously seen from him. The result is on the outside a big budget public service announcement, while on the inside, a film far more complicated than it seems.

Denzel Washington's Whip Whitaker is a commercial airline pilot who confidently flies his plane through a horrendous storm, instinctively flips it over to stabilize its frightening nosedive, saving almost everyone on board when the plane crashes. In any other case, he would be a hero. The problem here is that he entered his cockpit not only with the usual regulation black sunglasses and professional scowl, and the wizened narcissism of an arrogant flight veteran, but he was also perfumed in gin, storing vodka and cocaine in his capillaries where we would normally expect to find blood. As a result, we follow a long struggle ultimately seeking to keep him out of jail. 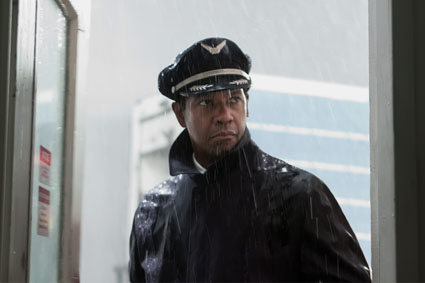 Aside from Whitaker, the main character of the story is that plane crash. An initial twist of "Flight" is that if Whitaker were sober, his plane would have crash landed in some suburban neighborhood, killing everyone on board (including himself), along with dozens of locals. But, because he was drunk, his inhibitions were absent, so he saved the day. Considering that he spends almost the entirety of the film in flight from the press, the authorities, and especially his own self, we can expect that he would not otherwise have had the courage in that moment in the cockpit to conduct the daredevil tricks that saved the passengers. 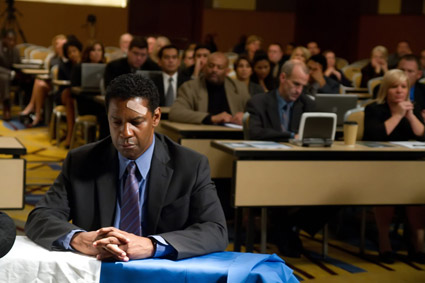 Or, consider another scenario: if he were not on this plane, he would have continued with his habits, perhaps for years. Along the way, he might have stopped, or he might have destroyed someone else, or he might have destroyed himself. Aside from his relationships with his flight attendants and pilots, he seems to have one friend, an enabler. Harling May (John Goodman, in another classic performance) is essentially the Devil, on-call 24/7, ready to provide him with any elixir - booze, drugs, porn, or privacy - to boost him to where he wants to be. But, the crash became his vehicle to ultimately accept and confront his alcoholism, after falling deeper and deeper. 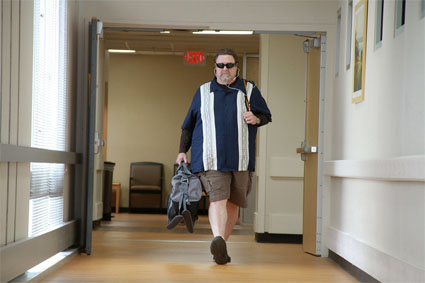 And, from there, the film asks us the simple question: is he still a hero? He saved almost everyone on the plane from certain death. But, because he was inebriated, he put them all at risk from the moment he stepped onto the plane. We might also remember that early in the flight, he veered the plane way off course, seeking out a corridor of calm in between giant roaring thunderclouds. Again, if he were sober, he might have flown cautiously, never putting anyone at risk, never putting the flight in any danger beyond the usual turbulence.

The film's answer is that he is not a hero. Rather, the successful crash landing was an "Act of God." Shortly after the crash, we follow Whitaker into a tender scene in a hospital stairwell, where he befriends a rehabilitating heroin addict (Kelly Reilly) and a dying cancer patient (James Badge Dale) smoking together: our modern corrupted technique of sharing the peace pipe. The patient tells him that all in the world is an act of God, done according to God's will, for it was not his own will to get cancer, and it was not in God's will to answer his prayers to be freed from the cancer. That outlook sums up a theology of cold fatalism.

And, this discourse has me thinking that "Flight" is a sequel of sorts to Zemeckis' previous live-action film, "Cast Away" (2000). In that film, also a plane-crash film, Tom Hanks could only find his way after embracing his powerlessness against the hands of fate. Every time that Hanks fought the dominating power of destiny, he failed. When he accepted his weakness, the pathways to hope opened wide for him. 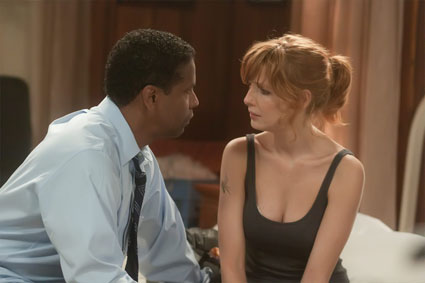 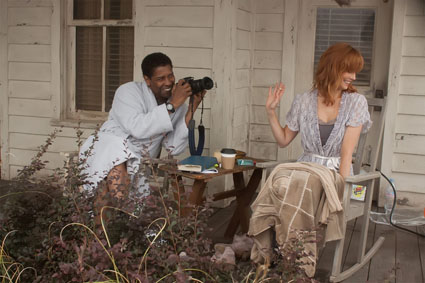 In "Flight," however, acts of God keep imposing themselves upon Whitaker, whether we speak of that chance meeting in the stairwell, the Alcoholics Anonymous meeting he attends for his friend, the unlocked hotel door full of treasures, the discovery in the plane's trashcan, or the final questions in his Federal hearing. In every case, these occurrences call on him to confront his illness. In almost every case, he runs away, until he decides that he can no longer run.

Consider that when he flies his plane past its original turbulence, he then greets the passengers, while quietly mixing some booze with the sleight of hand we'd expect from an expert magician. As the film progresses, we discover that that specific act of dangerous indiscretion later becomes the doorway to his freedom. Meaning, the acts of God in this film are hidden acts of Divine mercy. The hands of fate in "Flight" push him and push him to also accept his powerlessness. This powerlessness, though, is not against destiny, but against himself and the drink.

And, the role of the Divine, rather, the role of religion also plays itself out. On the one hand, we meet a few believers who find their exhilaration in their confessions. But, they offer nothing for most of our characters. The real temple was the confession of the self, either in the AA meeting, or in other places. The real question of religion is not authenticity, for most religions would fail this test. The real question of religion is efficacy. If it works for you, fine; but, the temple of Alcoholics Anonymous works much better for many people.

So, why does he drink? Many films about addiction seem to identify some causes. In Edward Zwick's "Courage Under Fire" (1996), Washington drinks to first cope with mistakes he made in war, and to second cope with the pressures of his professional assignments. In Jason Reitman's "Young Adult" (2011), Charlize Theron seems to drink, never having outgrown her high school parties, while coping with her apparent personal and professional failures. Here, this film recalls Mike Figgis' "Leaving Las Vegas" (1995), in that the film does not tell us how he got here. Rather, it tells us what his drinking has done to him. In that way, this film seems far more honest where the others seem more literary. Thus, Whip Whitaker drinks because he drinks. 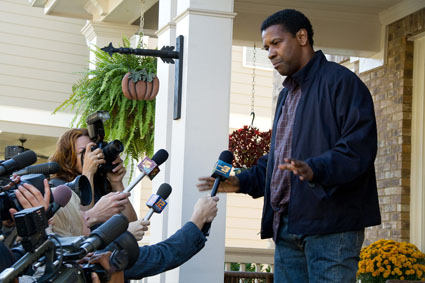 And, in the process, he goes through all the steps of an alcoholic. He remains in enough denial that he concocts multiple recipes to hide his drinking. He has less control over his temper. When presented with opportunity, he plunges back, even though we find ourselves hoping he will not. At multiple times in the film, I joined the theatergoers dreading, gasping, apprehensive that he would make the choices he would make. Despite the pleas of everyone around him, he cannot stop his drinking. Instead, he alienates everyone except for his pusher (Goodman). And, at multiple points in the film, watching Washington, I started thinking about some of my own unhealthy practices, and the consequences they have had on my life, and the lives of those around me. 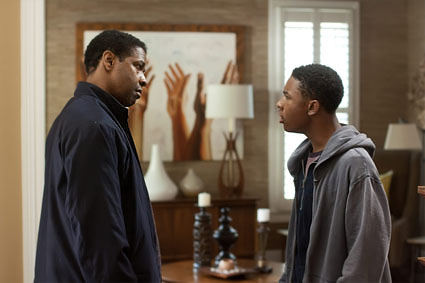 It is important that Denzel Washington played Whip Whitaker. It is easy to misread this film as a Washington vehicle, because he is in nearly every scene exercising his profound acting chops. But, even when worn out, Washington still looks more handsome and in control than most of us. And, that allows for a strong camouflage of the corroding man. For the first two thirds of the film, I had trouble accepting Washington, because he is so in control in that way that Washington always seems to be in control. I never bought his Oscar winning performance in Antoine Fuqua's "Training Day" (2001) because it was so far outside of the Denzel persona and the Denzel dialect that it seemed absurd, almost like having Tom Hanks in the same role. Similarly, I did not accept Washington here, and that worked to the film's advantage. Just as he was in denial about his illness, so too was I in denial about him.

And, I wonder if this film marks a new direction in Zemeckis' filmmaking. Looking at his long resume, this seems to be only his second fantasy-less dramatic film. Zemeckis always had the rare skill of merging the spectacle with the intimate, placing him a small league with Spielberg, James Cameron, Ridley Scott, and the Wachowskis, but the spectacle would often overpower the intimate with very successful results, as in "Forrest Gump," "Contact" and "Back to the Future" for example. Here, however, we have the opposite. Every moment of this film, including the moments in the plane's flight and crash are intimate moments, charting the decay and hopeful redemption of a man. It never seems to take a single predictable step. There are no night terrors about the plane crash. There is no miraculous epiphany. The film just feels cold, and gets colder as it moves along.

And, does he get redeemed at the end? I suppose he reaches the only point such a man in such a circumstance could reach. And, in accepting that, he does, yes, find his redemption and more. We wish that it did not necessitate a divorce, a plane crash, six deaths, and a host of other problems, but life sometimes works that way when we remain broken, and that way sometimes turns out to be a path of mercy.