Watching the World Slip Away

This prickly film haunts me. I am now older than James Dean, Marilyn Monroe, Jimi Hendrix, and Malcolm X. I am at that age where the infinite world of my childhood bedroom is now replaced by a complicated mass of interwoven needs, wants, and concerns. The soundtrack of my youth is a summer of wind blowing through fragile leaves, with katydids buzzing along. The rattling taps of rain on our roof has now given way to the plastic clicking of this keyboard and various other mechanical monsters. Under it all is an ongoing hiss of noise. I also sometimes fall into that trap of looking at today through the telescope of an idealized yesterday; that outlook is a slick valley that is difficult to climb out of and easy to slide back into. Jack Nicholson in Sean Penn's "The Pledge" (2001) is likewise watching the world change. More than that, he is watching his world slip away from him.

A little blonde girl in a little red dress gets savagely murdered in white snow. The cops believe they caught the killer: an inarticulate, shocked-eyed, frightened, snorting Benicio Del Toro. Aaron Eckhart, almost unrecognizable behind colored hair, smirk and an overconfident mustache, is the cool young cop who compels him to confess. Case closed. 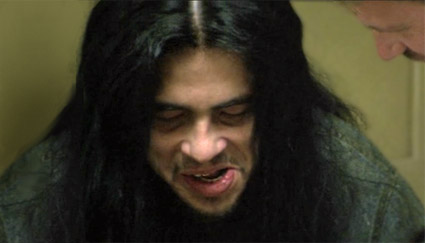 Nicholson, however, watches the confession and is convinced Del Toro does not know what he's saying or doing. The killer is still out there, and Nicholson has pledged to the girl's parents (in quite a scene in a turkey farm) that he will solve the case. He quietly conducts his own investigation, his own interviews, and draws up evidence. As he presents his data - a little girl's painting of a man, a porcupine and a black station wagon - the cops in the room avoid rude comments by instead visiting each other with skeptical, glances. In any case, Nicholson determinedly gets closer and closer to the killer, but we wonder all along if he is taking us anywhere worth visiting, wondering if there even is a killer on the loose. 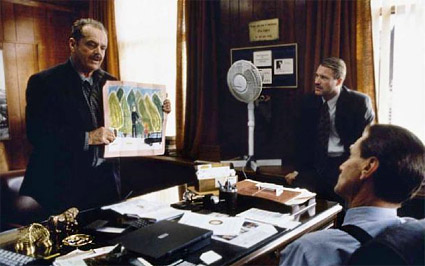 Before I continue, I should mention that this film is indeed a variation on the one-last-job genre. When one-last-job movies involve criminals, they conduct their last job before retiring into legitimacy. When one-last-job movies involve officers, they face their most challenging adversaries. In both cases, the adversary is often the same: pride. Here, it is a bit different: his real adversary is indeed himself, but it is his resistance against an inevitable fade into a dusty obscurity along the side of unnamed roads. But, does he know that?

The cops seem to be accustomed to murder and the process of investigation. But, for Nicholson, the little girl's murder (and his own subsequent investigation) signals the end of a culture of commitment to justice, replaced by a culture of speedy accomplishment. The need to fulfill the pledge to the victim's parents not only drives him, it becomes his contribution to preventing the world from growing a step darker. At some point in our lives, I suppose we each wonder about the legacy we leave, hoping for a mark of permanence in the crumbling sand hills of this world. 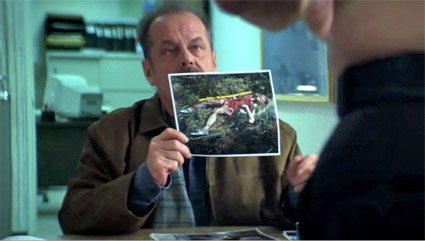 Thus, as we follow Nicholson in his quest, we don't see this film as the story of a man solving a crime. Rather, we are watching to see if this is the story of a man who is deluding himself, thinking that he is facing a whodunit when there might not be one. And, we want him to succeed. As the film reaches its climax and subsequent unraveling, we also wonder if he conned us along the way. Meaning, as Nicholson begins his new retired life, he relocates, he finds love, he starts a new career. Or, was he quietly continuing his investigation, using these new relationships as bait to hook the phantom criminal?

Nicholson develops a tender romance with Robin Wright, but was it real? When he builds her daughter's swing set, at first he seems generous, but later we wonder if is he placing it along the road for her safety, or to lure a killer? When he gets challenged about his conduct, he is unable to provide us with an answer. And this film torments us because at the end, he does the unthinkable in American cinema: he gives up. It seems that nearly every film produced here is about heroes and anti-heroes facing, fighting, and defeating the greatest obstacles. Here, not so. Sean Penn's films tend to be about men who raise their fists and are beaten down. 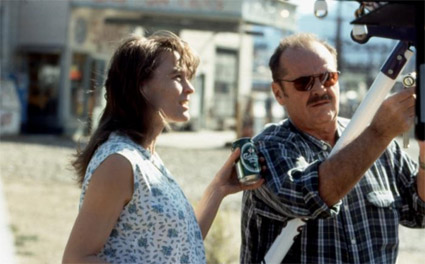 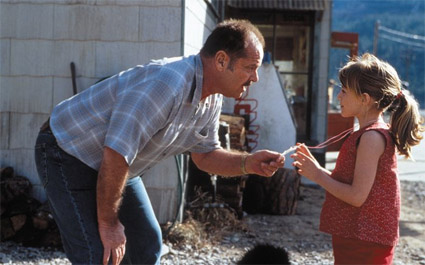 And this film has its own world of cosmic justice. There are two men we believe are murderers. In the case of the first, we immediately suspect him, all the more so because of his pious demeanor. We declare him guilty, especially when he smiles at us, even though the film itself does no such thing. In the second case, we watch an anonymous man quietly burn in a hellish fire of violent flames. And we watch, knowing that even though he is receiving some sort of justice, Nicholson gets unfairly tried, convicted, and discarded in the consciences of his peers.

As I watch this film, I get the sense of being squeezed out. I do not recall any overt obscuring, yet the roads often seem just too thin, especially in key scenes. In that turkey scene, Nicholson stands with the parents of the murdered child, surrounded by cackling birds. Scenes and frames seem just slightly crowded, or excessively close up. Colors, even when washed out with sand and dirt, seem boldly vivid, whether we speak of a yellow snowmobile, green trees, or the red blood in the white snow.

The first time we get squeezed out of our world is through the birth canal. And, from there, life is a process of rebirths into new worlds, except that we call them "the first step," "the first day of school," "graduation," "retirement," etc.. As we get pushed through these subsequent reincarnations, we then look back on past lives with a type of bittersweet, perhaps nauseating longing for things that may not be what we expect of them. This film is about the way we witness life's changes and turbulence and make sense of it. If we were to focus "No Country for Old Men" on Tommy Lee Jones's Officer Ed Bell instead of Javier Bardem's Anton Chigurh, then perhaps we would get something like this story, except that this one is much more frightening.

"The Pledge" is streaming on Netflix Instant, and can be rented via streaming for $2.99 from Amazon or Vudu.