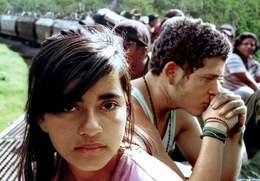 I told Roger it would take me 48 hours to review "Sin Nombre" and yet hours turned to days and days to months, and I still had not reviewed it. Scratch that. I did write four reviews, but not a satisfactory one. The first review was too much about my views on immigration and didn't elaborate much on the film. The second was the other way around. The third was about how the film was great based on the way it was shot. That one was too technical. The fourth review was too personal; a review should be about the film, not the person reviewing it. I was struggling with four walls around me. It was not a writer's block; I just didn't know how to tackle this film. Then it came to me. It was something I read and underlined in one of my Ebert books. I turned pages, re-read chapters and finally found the quote. I'll therefore use it to structure my review.

I have this quote underlined in my copy of Awake in the Dark. Now, I also pinned it to my wall for a constant reminder. After watching this film, I realized that this quote is more relevant now than ever.

The one it seems to provide." "Sin Nombre" is Cary Fukunaga's directing debut, revolving around two main characters, Casper or Willy (Edgar Flores) and Sayra (Paulina Gaitan). Casper is a member of the feared gang Mara Salvatrucha. He tries to initiate a young boy to the gang. After that, as part of the first step of the initiation process the gang beat up the kid. The boy's cries transform into a smile. He is then nicknamed Smiley.

My video review follows the trailer for "Sin Nombre:"

Meanwhile, Sayra reunites with her estranged father and uncle. They prepare to head north to the United States as emigrants. Soon both stories merge during an attempted rape on a train. Their journey starts there as Casper tries to escape his doomed fate while Sayra tries to reach her fate, America. Their friendship deepens along the way and trouble follows as brutal gang members chase them. So, on one hand we have a study of a Mexican gang culture and the corruption of the youth, on the other, "Sin Nombre" is about immigration and the painful journey across the border.

The Title: "Sin Nombre" "Sin Nombre" is one of the most powerful films of the decade. At times as intense and gritty as "City of God" and at others the complete opposite, "Sin Nombre" is a beautiful and touching film about immigration, youngsters in gangs, and the journey for redemption. The performances are very realistic and simply spectacular as I found myself forgetting I was watching a film. The breathtaking cinematography, documentary-like message, and suspenseful screenplay combine resulting in a modern day masterpiece about the many lives lost on the way across the border. It is shocking how many of these people die trying to reach their destination. What is even more shocking is that we rarely hear of them. They only end up forgotten as if with "no name" or "sin nombre." 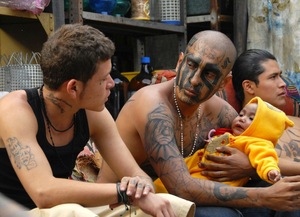 Arriving at the Conclusion "I Share" -- not that it matters. As an Egyptian living in a third world country, I could not help but feel sorry for the characters of this film. Americans love their country as I love mine. Many Americans do not appreciate their freedom and healthy environment. They are used to it and so don't take it for granted. If you ask anyone from a third world country about their idea of heaven on Earth, they will most probably describe one of the states in the US.

I watched this film a second time with a financially troubled friend of mine. During one of those horrific scenes on the train, he whispered "Lucky Bastards." I put the film on pause and gave him that "What the hell are you talking about?" look. He then grabbed the remote control from my hand and resumed the film. I now realize that he was not talking about the dangerous journey but of their location with only a border separating them from the U.S. It's not that it's Mexico; trust me, if you place any third world country south of the States, some citizens of that nation will react the same way 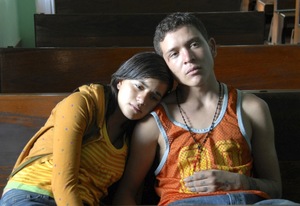 The friend of mine has never been to the U.S. Whenever, I return from Los Angeles, New York, Orlando, or Illinois, I bring back a special gift for him, be it a shirt or a watch. I have seen him show off these gifts to his friends. With pride in his voice: "Da mesh men ay heta. Da men Amreeka!" ("This isn't from any place. This is from AMERICA!") Now, what's interesting about all of this is the idea of America in the eyes of a foreigner who has never stepped foot into the country. Millions of people only know the U.S. through what they see in films. They don't know New York as it is, but New York through the eyes of Woody Allen and Martin Scorsese and so on. The only image of the United States to them is the result of a combination of everything they have read and every American film projected before their eyes. This is something Americans may understand but will never feel.

None of this comes from the film. All of this I bring to the film because I live in Cairo, a place where 20% of the population live under $2 a day. These people will never see the locations as they are and can only visit them through film. What's even more interesting is that all of these thoughts have been triggered by a film, "Sin Nombre." Here is a debut film directed by an American that presents facts as they are. "Sin Nombre" injects the viewer with the realities of going through what many emigrants experience as you read this entry. 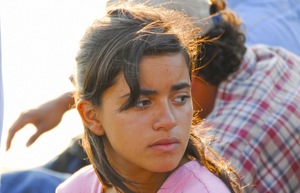 I have utmost respect for the American law, I would never break it myself, nor would I like to see others doing so. However, the punishment should vary from one illegal immigrant to the other. Instead of jailing the whole bunch, precautions should be taken. Investigating the reason for crossing the border is essential. An old man escaping the harsh realities of his gang-infested village doesn't deserve the same punishment as a gangster who crosses the border to represent his gang in a U.S. state. I'm no expert when it comes to the controversial subject of immigration, I do know that there is no absolute resolution to the problem.

The Real Subject: "It is about how it is about it." Fugunaga's first film as both a writer and director packs a strong, brutal emotional punch. The film plays like a Greek tragedy that is both touching and painful to watch. "Sin Nombre" works that way by mixing two dark worlds, the behind the scenes look at the Mara gang culture (a real gang), and the difficult journey across the border. Cary Fugunaga could have directed two separate pictures or focused on one rather than the other but he chose not to. This film is about the Mara and about immigration but its subject is very different. Now how is the film about what it is?

Both storylines compliment each other, and subconsciously the viewer thinks of the ugly Mara environment as the cause of the effect (Sayra immigrating). The director chose to merge both stories using stunning cinematography and beautifully shot landscapes. "Sin Nombre" is not about immigration or gangs. It is about the search for a better place. The movie is just as much about kids living in a tough neighborhood in the Bronx and dreaming about finally breaking out.

"Sin Nombre" is about how it is part of human nature to seek a healthier environment and better surroundings. Fugunaga expresses that by exposing the viewer to a brutal, violent, and ugly world and through that, he drives your emotions making you root for the character's safe arrival to the United States. It's no longer about going to America but about going to a safer place. Fugunaga achieved that using the conventions of film and mixing two different tales to express a theme. Never have I witnessed this message more powerfully delivered through any other medium.