The odds are with the house 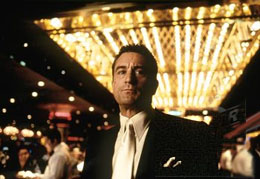 I'm fairly certain most Martin Scorsese fans prefer his Robert DeNiro period to the current one with Leonardo DiCaprio. The later entries may include the film that won him the Academy Award for Best Picture ("The Departed") and they've surely displayed signs of greatness, but I don't think any of them can be discussed as pinnacle achievements like his earlier ones.

Among Scorsese's most underrated movies is "Casino (1995), his last collaboration with DeNiro. It generated great expectations before its release but was eventually dismissed by some critics as a rehash of "Goodfellas." There are plenty of similarities between them. Both have an opening scene set midway through the story, about a shocking act of violence that leaves the viewer wondering what could have led up to it. Both films provide an excruciatingly detailed depiction of the inner workings of their core subject.

Their soundtracks consist of old-time hits that don't necessarily have to do much with the plot (but fit the scenes well) and they feature narrations by their central characters. Both include masterful long shots that help us grasp the nature of the protagonist's dealings and they share much of the same cast, including the DeNiro/Pesci team. More importantly, behind them are the usual Scorsese themes of human weakness and betrayal with one important variation: the characters in "Casino" mostly lack guilt and remorse, making it somewhat different than most of his other pictures.

"Casino" deals with Sam "Ace" Rothstein (Robert DeNiro), a man of few sympathies who lives and breaths gambling. He is awarded "the keys to the Kingdom" to rule the (fictional) Tangiers Casino in Las Vegas, a city of unparalleled glitter with a dark side that includes the handling of disputes by filling graves in the adjacent desert. Sam is an obsessive-compulsive genius with very few skills who personally sees to every detail, no matter how insignificant, be it checking the number of blueberries on muffins, or firing casino dancers who've gone above a certain weight. He only bets on sure things, except when it comes to falling for flashy hustler Ginger (Sharon Stone), who clearly is trouble. Everything seems to be marching along until his bosses assign him -- with the assistance of mobster Nicky Santoro (Joe Pesci) -- to make sure "things go smoothly," detonating instead a perfect storm of events that will lead to their inevitable downfall. 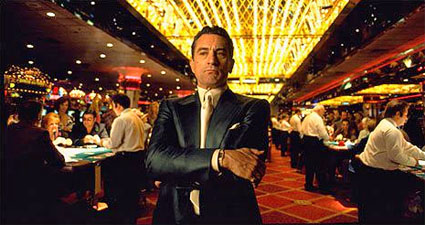 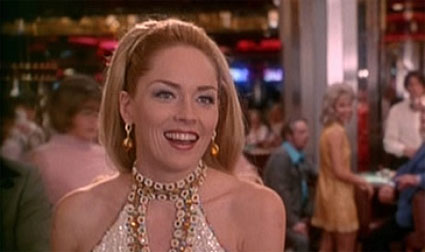 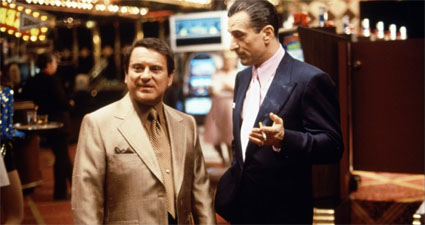 "Casino" brilliantly handles an aspect of organized crime that's full of fascinating details. However, it's important to point out that it still isn't in the same league as other Scorsese's masterpieces and there are several reasons for this. As despicable as the actions from the characters in his prior films could be, most of these men could often be rather likable.

"Goodfellas" is a very funny movie in its own way and I don't say this based on its obvious, deliberate attempts at black humor, such as the sight of an upside-down, bloodied man who's about to be thrown into the lion's den at the zoo. Even in its most harrowing scenes, Scorsese displayed an ability to make the audience laugh at things they aren't supposed to, at least in theory anyway. Think of the talkative man with the wig getting stuck with an ice pick in the neck, ("I thought he'd never shut up!") or when "Spider" the waiter is shot by a frenzied Pesci playing cowboy. Additionally, its long list of gangsters with the brilliant aliases made for a very appealing fraternity that's always been fun to revisit in repeated viewings, regardless that they all end up deceiving or murdering one another.

Even the repellant Jake La Motta from "Raging Bull" had some funny eccentricities in the middle of truly ugly sequences, such as when he gets into a shouting match with his first wife and the neighbors join in, or when his brother further hurts a man he's recently beaten to a pulp, while hugging him to make amends. It also has an odd scene where the Pesci character unwittingly insults the memory of their mother with a long tirade of insults that's very similar to one of the worst uttered by the girl in "The Exorcist," but the situation here is pathetic to a point where instead of feeling horror, your heart goes out to both of them. All these moments in other Scorsese films made their uglier sides easier to cope with and we ended up warming to their protagonists, no matter how loathsome.

In contrast, even though "Casino" includes the always watchable DeNiro/Pesci duo and much of the same supporting cast we've seen in several of the director's movies, it lacks the presence of a single likable personality. Ace is a numbers man who's not fond of anyone except Ginger but that doesn't go very well or last very long. His prevailing attitude toward her is one of insecurity (not unlike Jake La Motta's for his own wife) and yet, he is the sole character the audience can remotely identify with as we see how she makes him pay for his sins. Ginger's only soft spot is reserved for her lowlife pimp Lester (James Woods) and her daughter is just a pawn in her dispute with Ace. 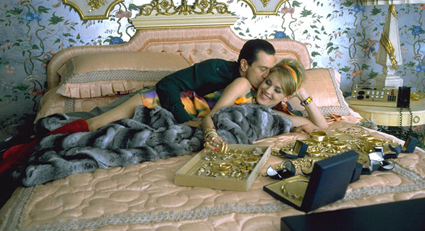 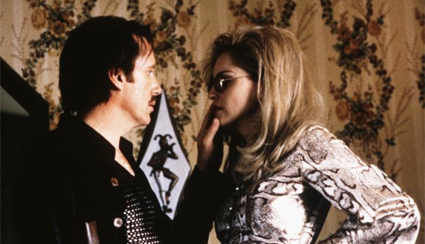 Sharon Stone's performance earned her an Oscar nomination, but she spends a good portion of the time screaming and carrying on as her presence becomes increasingly irritable. Appreciating Pesci's Nicky Santoro isn't all that easy either. Here again he plays a man whose temper flares easily but with an intensity that's been turned up a few notches. In comparison, his Tommy DeVito from "Goodfellas" (with the sweet, grey haired mother) seemed indeed like the "funny guy" he was often referred to as. A thug of Nicky's cruel nature may have been indispensable in running a place like the Tangiers at that time but the only feeling that he's able to bring forth in the audience is fear. The three protagonists are invariably shown pursuing their own personal goals without looking back to see the lives they destroy and it's always fairly obvious it will only be a matter of time before they betray one another. Unlike Charlie from "Mean Streets" they lack a fear of God or any semblance of a conscience and their only regret comes from having trusted anyone at all. This makes it hard to care too much when their unavoidable doom arrives. 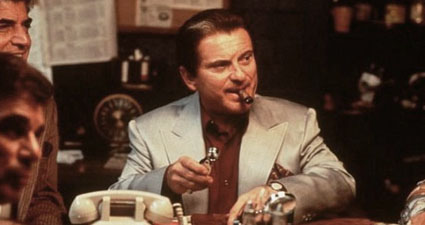 The violence in "Casino" feels utterly realistic but, unlike Scorsese's previous entries, there are no quirks to lighten the proceedings. The image of a man's eye popping out and the deaths of Nicky and his brother are as unbearable as anything I've seen in any movie before or since and yet, the characters behind these situations ring perfectly true to the business they're involved with, so it's hard to blame Scorsese. They just don't make for as compelling company as they should have. The film has some fun with the ruthless but clumsy group of Dons and the endless parade of pastel colored leisure suits from the period as worn by Ace and Ginger, but overall the movie is a bit too intense for its own good. 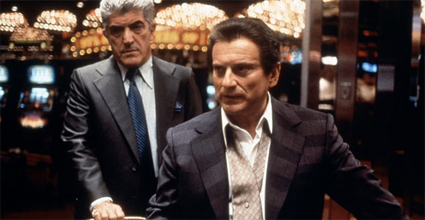 What's best in "Casino" is its level of detail in conveying the many facets of this enigmatic world, a task at which it's almost as good as "Goodfellas." Think of the long sequence depicting the several levels of employees keeping tabs on each other, with "the eye in the sky" looking after everybody; the simple way in which a character detects a team of cheaters and his cruelty in dealing with them, as well as how the same man manages to stop the occasional winner from leaving with the joint's money.

There's also great poignancy in its simple conclusion that behind all this violence, the glamour and the well-being of everybody involved, there is a crucial black suitcase full of cash that the bosses expect on a regular basis, in an apparently insignificant restaurant in the Midwest. This world isn't exactly the one where Scorsese grew up and consequently, the end result isn't quiet as heartfelt as in "Mean Streets" or "Goodfellas" but the director (who also wrote this script with Nicholas Pileggi) shares a good deal of knowledge about the complicated intricacies behind this particular business.

While it is true that Scorsese resorted in "Casino" to using many of the same techniques from his prior films, it represents a look at a unique aspect of organized crime that's well worth exploring. I can't imagine it being made in any other style. Whatever its faults, it's still better than most everything the director has done in recent years; he is just too good at this kind of material. One of the reasons "Casino" was relatively ignored at awards time may be how easy Scorsese makes it seem to create a film like this. I do wish Scorsese had given "Casino" a little more humor but this is still a very involving movie, the kind that whenever it shows on TV, I usually find myself giving the remote control the rest of the night off.