The fix was in 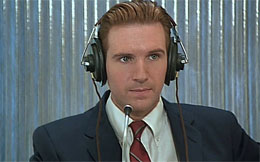 Robert Redford's "Quiz Show" (1994) depicts the early days of television during the 1950s, a world that evoked fantasy but was run by real human beings. Unlike today's TV programming, the shows from those days were innocent and naïve (much as portrayed in "Pleasantville") but the people behind the scenes were like their colleagues in Sidney Lumet's "Network" (1976). "Quiz Show" shares some basic themes with the latter: the wrongdoings that network executives repeatedly commit, those that good people can occasionally perpetrate as well through greed, and the common denominator between them.

"Quiz Show" also brings to mind Peter Weir's "The Truman Show" (1998) as the audiences in both cases lived their lives through the show's characters by way of deceit; in the first case it was the protagonist being fooled, in the second it was the viewers themselves.

As the movie conveys, the NBC honchos went to extremes in fixing the results of their top-rated game show, making the exceptional seem normal. When the new program came out, it provided the opportunity for audiences to fantasize realizing their dreams (without actually doing so) than ever before, and conscious executives were only to happy to comply. As one of the show's lower-tier overseers mentions: "we are not hardened criminals, we are just in show-business." Their trade wasn't all that different from any other where profits are the bottom line.

"Quiz Show" is set at a time when T.V. was still a new industry. As we learn, it didn't take long for the men who ran it to realize they were in the business of creating illusions in exchange for ratings. "Twenty-One" sold viewers such fantasies as its own integrity being carefully protected by guards and a safety deposit box; their sponsor's (Geritol) miracle attributes for "curing the tired blood"; the improbable notion that only the better-looking people could be knowledgeable on every subject imaginable and become champions, so that viewers could happily count all that money along with them. Only the industry's newness disguised the fact this was too good to be true. Audiences had to learn the hard way. 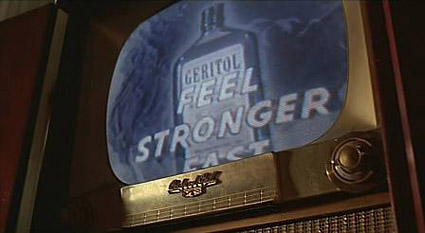 Just as it's always been normal for viewers to subconsciously validate well-depicted events in movies, the same applied to shows like "Twenty-One." That television executives would plot to deceive viewers was despicable but also predictable. In my "JFK" review I mentioned how movies always choose what looks better cinematically over what is real or accurate. Why would TV be any different? Why would any good TV decision maker consider leaving the fate of their ratings to chance? As network executive Martin Rittenhome (Martin Scorsese) confides to government official Dick Goodwin (Rob Morrow) "the very idea that I wasn't involved in every decision of that show's operation, frankly, that's very insulting!" 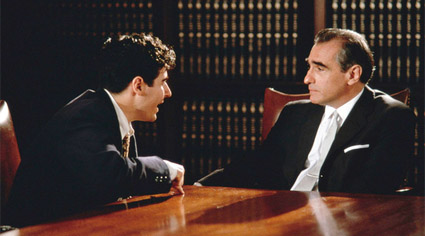 "Quiz Show" is the story of two very different men. Herb Stempel (John Turturro) is an obnoxious, envious, loser, a know it all whose first reaction from someone who sees him on the screen is, "that's a face for radio". In the other side is Charles Van Doren (Ralph Fiennes), a nice, clean-cut, college instructor who comes from a family of Pulitzer Prize winning writers. Both men face each other in the game-show "Twenty-One" and based on these descriptions, it's not hard to guess which one network executives believe will bring them better ratings. Stempel is asked to "take a dive" in return for a shot at a television career that was never meant to be, this will represent an insult to his pride and turn him into a whistle-blower for Goodwin. 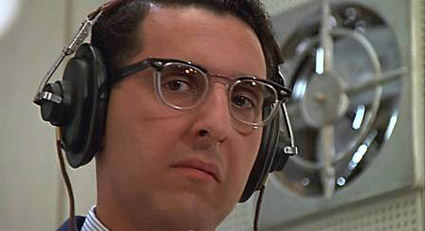 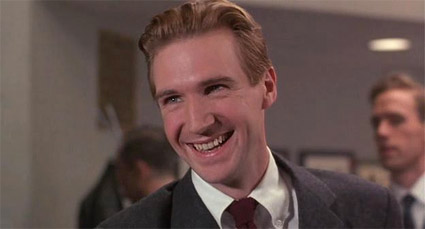 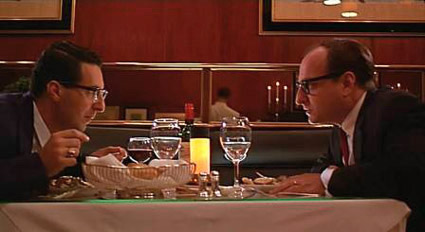 "Quiz Show" initially depicts its main characters in B&W terms but progressively shows enough of their layers for us to care equally about both in their own ways, The filmmakers wisely avoid making either of them the standard hero and villain, focusing instead on the predicaments derived from their participation on the show from opposite perspectives, with the real source of evil residing inside the network. Turturro is able to generate an unexpected amount of affection for Herb in spite of his character's abrasive nature; as much as he despises Charlie, it isn't until he sees him destroyed in the public eye that he's finally able to appreciate his rival in human terms and not just as the ultimate enemy. It is at this point that Redford allows for the audience to fully humanize Herb as well. Whatever their origins and natures, the film's bottom line is that both men enjoyed their moment under the sun and deceived their loved ones all the same. 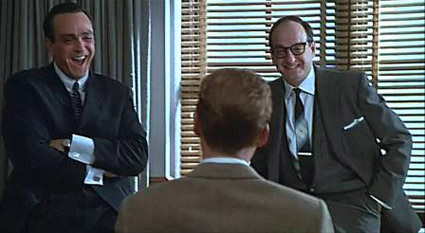 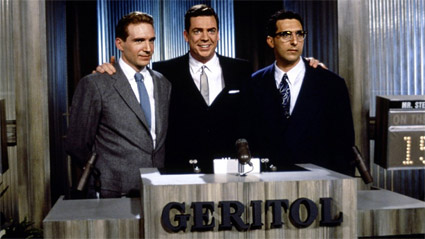 At the core of "Quiz Show" is the story of these two men, with a backdrop consisting of the intricacies in the industry's chain of command, where several unspoken understandings prevailed, forcing executives to do whatever it took to go after the ratings and protect those on top from situations such as this. The film never shows a decision-maker giving direct orders for anybody to commit an offense, nor is that necessary. When a high-ranking official is seen telling an executive "You are a producer--produce!" the message is clear. The same applies when one of the marketing executives (Scorsese) shows his awareness of the lower-tier men's hunger to remain in television and doesn't blink at the possibility that any of them might implicate him; as he mentions: "people have a short memory but corporations never forget" (Scorsese's fast-talking persona turned out to be ideal for his role as an screen-shark). 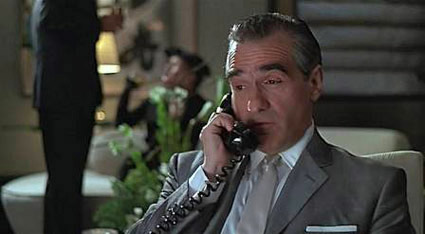 There's also the implied relationship between the network's Director with the head of the Congressional Hearings as well as with the judge who tried to quell this matter for years. Both alliances are handled by Redford with very little subtlety and it is conveyed that they warranted this will be nothing more than a speed-bump for the executives.

Early on, the Charlie character is shown in such a sympathetic light that the audience can't help but be glad to see his great life become even better by becoming the show's champion. Even Goodwin does everything he can to avoid putting Van Doren and his family in harm's way but just when it seems like Charlie will get over the hump at the congressional hearings and his reputation will remain unscathed, the filmmakers put their own sympathies aside and avoid committing the same mistakes made by the "Twenty-One" producers who would have done anything to provide their audience with a happy ending. They don't let Charlie off the hook so easily and provide him with every painful implication imaginable to his actions, including the disappointment to the film's model of integrity, represented by his father Mark (Paul Scofield) as he has to see his son lose everything they both dedicated their lives to build. 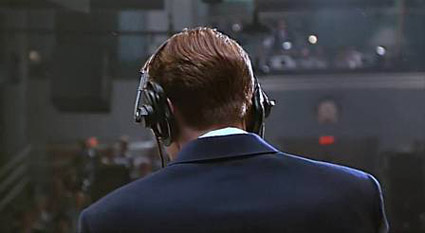 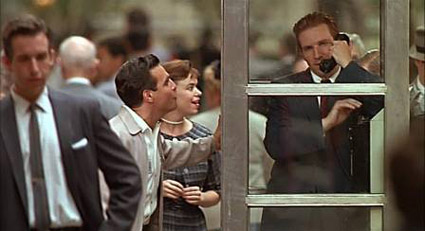 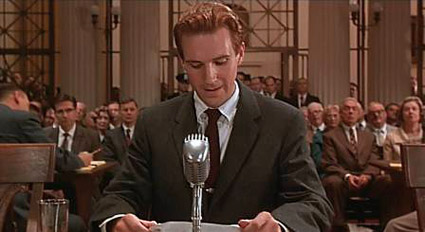 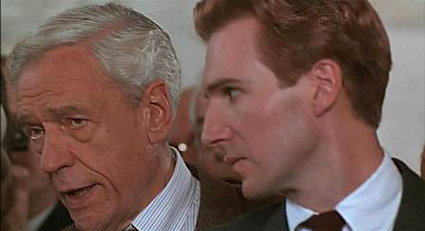 This doesn't mean that the ending is a downer (a movie's only possible happy ending can be the right ending, regardless of mood) and thanks to this approach, unlike the very show it deals with, "Quiz Show" became a lasting piece of entertainment. Its impact deriving from the irony that, even though Goodwin's goal was always to nail the corporations and spare the little people, the result from his congressional hearings was just the opposite. Their main effect on the game-shows themselves was the fact that their questions progressively were dumbed-down. These aspects make the movie feel much closer to how the real world often works than the standard morality tale. 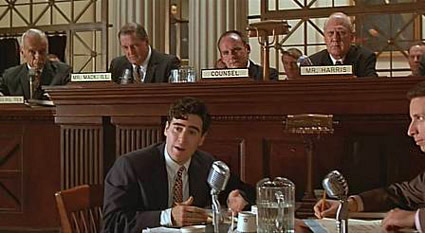 Redford thoroughly recreates the way television was made in its early days but his film is not so much about the game shows themselves as it is about the loss of faith by audiences in a new medium and the end of a period that seemed so much innocent than today (at least on the surface). The characters in the movie watching "Twenty-One" constantly mentioned how improbable it seemed for contestants to always come up with the right answers at the right time, but they always seemed to leave it at that: their wanting to believe at all costs came with a price. The bond that existed between the entertainment industry and viewers was severed but this probably wasn't such a bad thing, without going through an event like this, Television's programming today might still predominately be based on delusion and lies. Besides, it's hard to imagine the later surge of serious shows without an audience that had been awakened to the importance of choosing hard truths over fantasy.

GERARDO VALERO is Roger's FFC from Mexico City, where he lives with his wife Monica. Since 2009 Gerardo has been writing essays for RogerEbert.com, and for the last year has been writing a daily, blog about film clichés and flubs (in Spanish) on Mexico's Cine-Premiere Magazine.